Defending the Christian Worlview, Creationism, and Intelligent Design » Molecular biology of the cell » F-BAR domain proteins that sculpture membranes: By evolution, or design?

F-BAR domain proteins that sculpture membranes: By evolution, or design?

Remind some of the futuristic amazingly curved roof structures of buildings made by star architects like the Phaeno structure in Germany. The curves of the roof walls must be sustained by complex webs of scaffolds, which are designed to withstand the loads, forces, and different weather conditions to which the buildings are exposed. The dimensions and sizes and materials of the scaffolds and sustaining structures must be finely planned and calculations must be made in order for these structures to withstand the various environmental conditions. Nobody in its sane mind would imagine that such finely architectures structures could or would emerge by unplanned natural forces.
When you see the nice curvature of organelles in cells made by membranes, have you ever asked yourself how the different curved membrane shapes are accomplished ? It seems natural, and eventually we have never gave a second thought to that, but as it comes out, in the cell, nothing happens occasionally, or by chance, but everything must be finely orchestrated, and awe inspiring mechanisms need to be in place to accomplish every tiny bit of cell architecture, form and function.

To generate organelles, eukaryotic cells sculpt their membranes into compartments, often employing proteins as chaperones, for example, F-BAR domains. The latter induce formation of tubular and vesicular membranes.
F-BAR domains sculpt membranes through electrostatic interactions, driving the membrane to match the concave surface of the protein's banana-like shape. Lattice types are optimally attuned to producing high membrane curvature. The simulations reproduced also a process lasting 350 µs in which lattices of F-BAR domains form a complete tube out of an initially flat membrane.

Interplay between cellular membranes and their peripheral proteins drives many cellular processes, including cell division, growth, movement and cell-cell communication. During their lifetime and often with the help of membrane peripheral proteins, eukaryotic cells dynamically sculpt their various types of compartments.

According to the scaffolding mechanism, BAR domains bend membranes by attracting negatively-charged lipid headgroups to their positively-charged curved surface. During the scaffolding process, a BAR domain is considered to act as a rigid body, to which lipids are attracted via electrostatic interaction, transferring membrane binding energy into membrane bending energy. According to the membrane insertion mechanism, a BAR domain inserts its amphipathic groups like wedges into one leaflet of the membrane and, thereby, curves the membrane. N-BAR proteins use their N-helix as an amphipathic wedge, while for the F-BAR domain it is suspected that residue Phe117 inserts its bulky side chain into the membrane. Either mechanism involves strong membrane-protein interactions.

Conformation of F-BAR domain characterized through angles
(Left) The F-BAR domain is a dimer of two F-BAR proteins, the latter colored in purple and orange. (Right) Each F-BAR protein is composed of five helices forming a coiled-coil structure, with helix 2 to 4 colored blue, purple and green, respectively.  is formed by the principal axes of the central part and the end part of helix 4 (green);  is formed by the angle between the principal axes of the left and the right sides of helix 3 (purple). 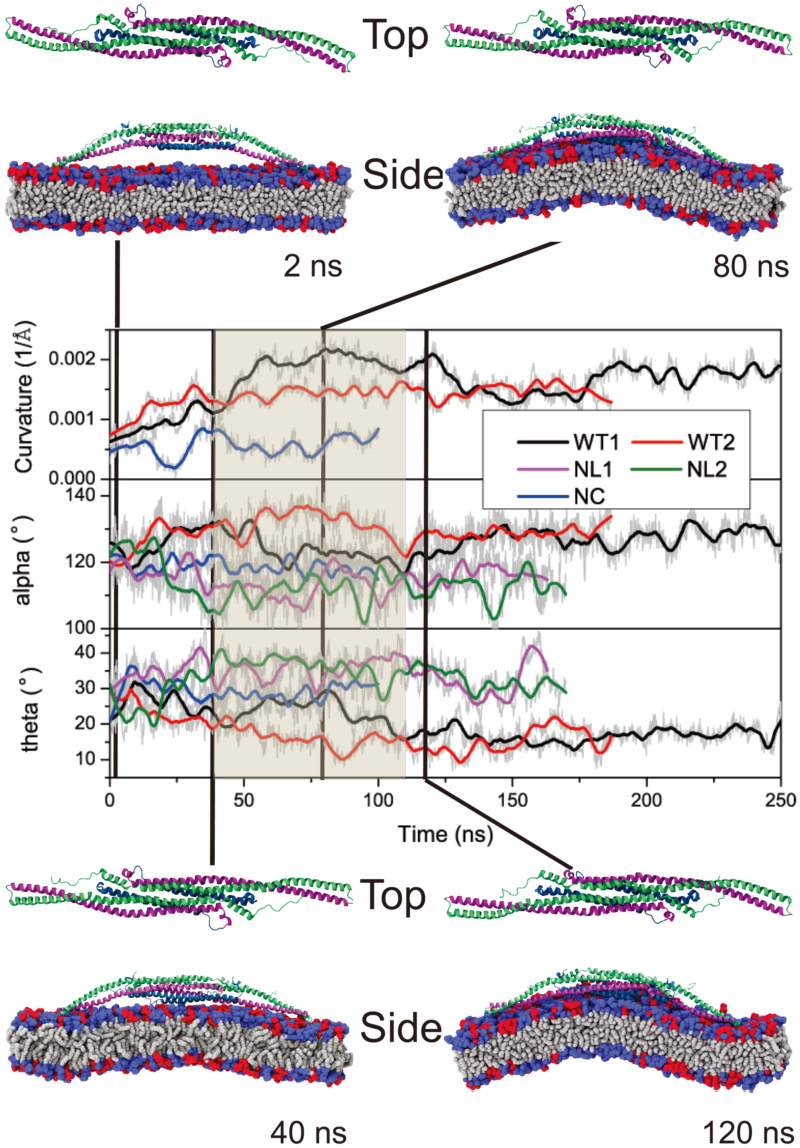 Change of membrane curvature and of angles

.
As shown in Fig. above, both

of WT1 change significantly upon interaction with the membrane;

, then increases back to

do not show such changes and fluctuate around different average angles.

In phase 1, lasting from 0 to 40 ns, the F-BAR domain binds to the membrane and membrane curvature increases slowly, while

In phase 2, lasting from 40 to 120 ns, membrane curvature is generated. During this phase,

In phase 3, lasting from 120 to 250 ns, the protein-membrane system relaxes. Membrane curvature decreases slightly and fluctuates around 0.0015A?−1;

values are restored close to the native state values, indicating partial uncoiling of the coiled-coil structure (Fig. S6 in Text S1). However,

values show the reverse, indicating that the domains coiled-coil structure without interaction with the membrane becomes further coiled, which suggests that partial uncoiling of the domains coiled-coil structure provides the driving force for membrane curvature formation. Indeed, if one removes the membrane from the final conformation of simulation WT1, as is done in simulation WT1WAT, the conformation of the F-BAR domain is quickly restored to a near crystal conformation and

assume values similar to the ones they assume in simulation NL1 and NL2, indicating that the uncoiling is reversible (simulation WT1WAT, see Fig. S8 in Text S1). 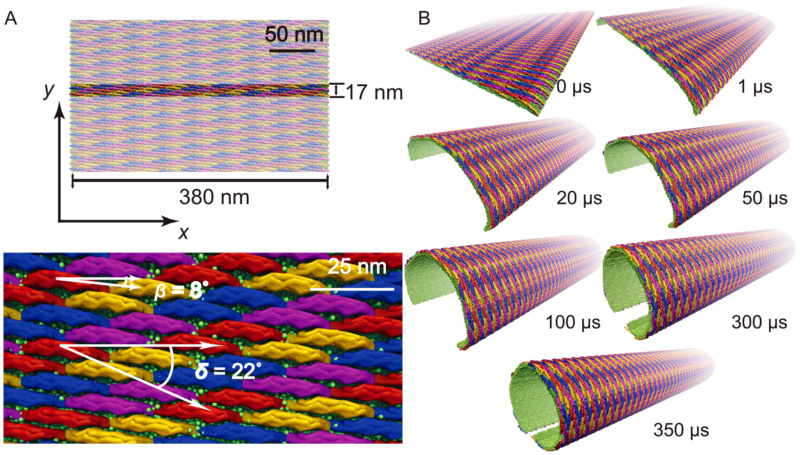 with respect to the

with respect to the

-axis. Periodic boundary conditions are assumed in the

-direction, so that the system can be regarded as a lipid patch of infinite length in this direction. (B) Membrane tube formation with lattices of F-BAR domains. Shown are snapshots of membrane structures during the 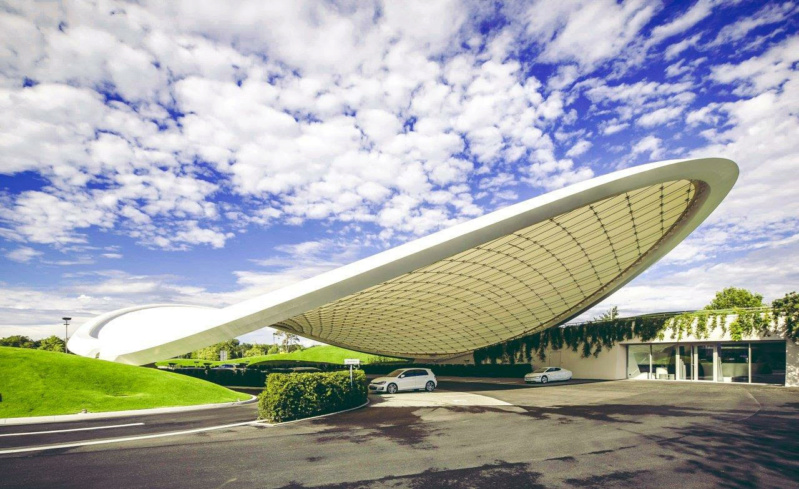 Defending the Christian Worlview, Creationism, and Intelligent Design » Molecular biology of the cell » F-BAR domain proteins that sculpture membranes: By evolution, or design?