Defending the Christian Worldview, Creationism, and Intelligent Design » Astronomy & Cosmology and God » The Strange Similarity of Neuron and Galaxy Networks

The Strange Similarity of Neuron and Galaxy Networks

Christof Koch, a leading researcher on consciousness and the human brain, has famously called the brain “the most complex object in the known universe.” It’s not hard to see why this might be true. With a hundred billion neurons and a hundred trillion connections, the brain is a dizzyingly complex object.

But there are plenty of other complicated objects in the universe. For example, galaxies can group into enormous structures (called clusters, superclusters, and filaments) that stretch for hundreds of millions of light-years. The boundary between these structures and neighboring stretches of empty space called cosmic voids can be extremely complex.1 Gravity accelerates matter at these boundaries to speeds of thousands of kilometers per second, creating shock waves and turbulence in intergalactic gases. We have predicted that the void-filament boundary is one of the most complex volumes of the universe, as measured by the number of bits of information it takes to describe it.

This got us to thinking: Is it more complex than the brain?

So we—an astrophysicist and a neuroscientist—joined forces to quantitatively compare the complexity of galaxy networks and neuronal networks. The first results from our comparison are truly surprising: Not only are the complexities of the brain and cosmic web actually similar, but so are their structures. The universe may be self-similar across scales that differ in size by a factor of a billion billion billion.

The total number of neurons in the human brain falls in the same ballpark of the number of galaxies in the observable universe.

But the concept of emergence makes the comparison possible. Many natural phenomena are not equally complex at all scales. The majestic network of the cosmic web becomes evident only when the sky is surveyed over its largest extent. On smaller scales, with matter locked into stars, planets, and (probably) dark matter clouds, this structure is lost. An evolving galaxy does not care about the dance of electron orbitals within atoms, and electrons move around their nuclei without regard to the galactic system they reside in.

In this way, the universe contains many systems nested into systems, with little to no interaction across different scales. This scale segregation allows us to study physical phenomena as they emerge at their own natural scales.

The building blocks of the cosmic web are the self-gravitating halos of stars, gas, and dark matter (whose existence has yet to be definitively proved). In total, the number of galaxies within the observable universe should be on the order of 100 billion. The balance between the accelerating expansion of the fabric of spacetime and the pull of self-gravity gives this network its spider-web-like pattern. Ordinary and dark matter condense into string-like filaments, and clusters of galaxies form at filament intersections, leaving most of the remaining volume basically empty. The resulting structure looks vaguely biological.

A direct estimate of the number of cells or neurons in the human brain was not available in the literature until recently. Cortical gray matter (representing over 80 percent of brain mass) contains about 6 billions neurons (19 percent of brain neurons) and nearly 9 billion non-neuronal cells. The cerebellum has about 69 billion neurons (80.2 percent of brain neurons) and about 16 billion non-neuronal cells. Interestingly enough, the total number of neurons in the human brain falls in the same ballpark of the number of galaxies in the observable universe. 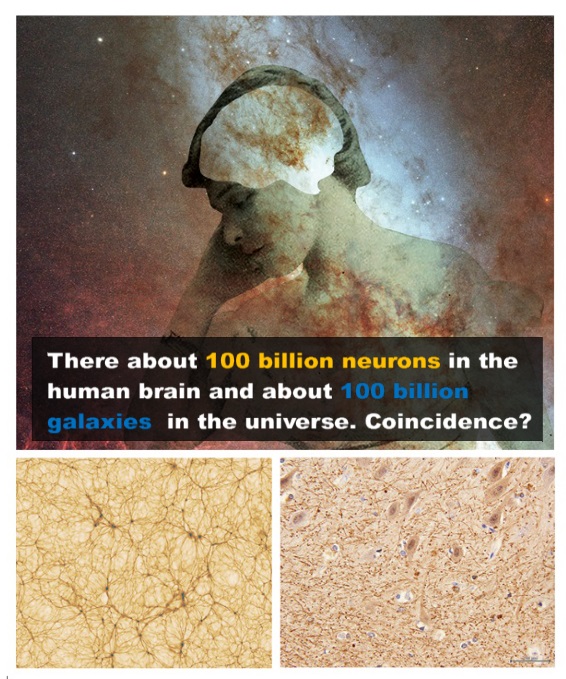 Defending the Christian Worldview, Creationism, and Intelligent Design » Astronomy & Cosmology and God » The Strange Similarity of Neuron and Galaxy Networks

» Neurons, remarkable evidence of design
» NEURONS & SYNAPSES
» Fine Tuning of our Galaxy
» Is there evidence for natural selection ?
» Evolution: Where Do Complex Organisms Come From?