The phosphorus cycle is rather simple. Inorganic phosphate exists in only one form. It is interconverted from an inorganic to an organic form and back again, and there is no gaseous intermediate.

Dissolved phosphate (PO4) inevitably ends up in the oceans. It is returned to land by shore animals and birds that feed on phosphorus containing sea creatures and then deposit their feces on land. Dissolved PO4 is also returned to land by a geological process, the uplift of ocean floors to form land masses, but the process is very slow. However, the figure below considers how PO4 is recycled among land-based groups of organisms. 1 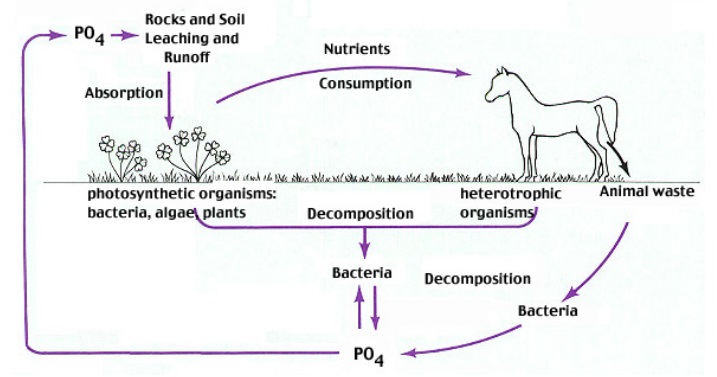 The Phosphorus Cycle.
Plants, algae and photosynthetic bacteria can absorb phosphate (PO4) dissolved in water, or if it washes out of rocks and soils. They incorporate the PO4 into various organic forms, including such molecules as DNA, RNA, ATP, and phospholipid. The plants are consumed by animals wherein the organic phosphate in the plant becomes organic phosphate in the animal and in the bacteria that live with the animal. Animal waste returns inorganic PO4 to the environment and also organic phosphate in the form of microbial cells. Dead plants and animals, as well as animal waste, are decomposed by microbes in the soil. The phosphate eventually is mineralized to the soluble PO4 form in water and soil, to be taken up again by photosynthetic organisms.