There is no Creator-God in the Greek religious system. Ancient Greek religion gets away from the God of Genesis and exalts mankind as the measure of all things. 3

You may think to yourself that the Greeks are exalting gods, not man; but haven’t you ever wondered why the Greek gods looked exactly like humans? The answer is the obvious one: for the most part, the gods represented the Greeks’ (and our) human ancestors. Greek religion was thus a very sophisticated form of ancestor worship. The Greek word for gods is theoi , literally meaning placers. The Greek gods are deified human ancestors who put their man-centered religion in place.

In Plato’s Euthydemus (at 302d), Socrates referred to Zeus, Athena, and Apollo as his “gods” and as his “lords and ancestors.” Greek stories about their origins are varied and sometimes contradictory until their poets and artists present Zeus and Hera as the couple from whom the other Olympian gods and mortal men are descended. This husband/wife pair, the king and queen of the gods, are a match for the Adam and Eve of Genesis. Zeus and Hera are the beginning of the family of man, and the origin of the family of the Greek gods. With no Creator-God in the Greek religious system, the first couple advances to the forefront.

We are told in Chapter 2 of Genesis that Eve was created full-grown out of Adam. Before she was known as Hera, the wife of Zeus had the name Dione. The name relates to the creation of Eve out of Adam, for Dione is the feminine form of Dios, the genitive form of Zeus. This suggests that the two, like Adam and Eve, were once a single entity.

Hera is the single mother of all humanity, and Zeus is, according to Hesiod, “the father of men and gods.” The term “father Zeus” is a description of the king of the gods which appears over 100 times in the ancient writings of Homer. As the source of their history, Zeus/Adam and Hera/Eve became the gods of their history. Those without a belief in the Creator have only nature, themselves, and their progenitors to exalt.

To the Greeks, the serpent was a friend of mankind who freed them from bondage to an oppressive God and was therefore a savior and illuminator of our race. The Greeks worshipped Zeus as both a savior and illuminator; they called him Zeus Phanaios meaning one who appears as light and brings light. The light that Zeus brought to the ancient Greeks was the serpent’s “enlightenment” that he received when he ate the fruit from the serpent’s tree.


Ancient Greek religion is rooted in human history based on the biblical Genesis account. While their viewpoints are opposite, the recounted events and characters match each other in convincing detail. Greek religious art portrayed Noah Nimrod in his successful rebellion against Noah’s authority.

The ancient Greeks knew exactly who Noah was. They called him Nereus, the "Wet One," and Halios Geron, the "Salt-sea Old Man."

“The Greeks also knew exactly who Noah was: they called him Nereus, the ‘Wet One’ often depicting his bottom half as a fish signifying that he had come through the Flood. The Greeks built the Parthenon to celebrate the triumph of the way of Kain over Noah and his God, and to glorify Athena, a picture of the serpent-friendly Eve of Genesis,” he added. 1

Neither Noah nor Nimrod is depicted incidentally or casually. Both characters are crucial to the expressed boast of Zeus-religion: The way of Cain—the exaltation of mankind as the measure of all things—has triumphed over Noah and his God-fearing offspring in the post-Flood world; God’s way is forgotten and the ancient serpent’s “enlightenment” from the ancient garden paradise is welcomed.

Unless otherwise noted, the paintings and sculptures dating from about 440 to 460 BC. Astounding is not a strong enough word for what is presented here: Painted and sculpted images of Noah and Nimrod from two and a half millennia ago! It should be front-page news, but as it does not fit within the ruling evolutionist paradigm, it will most likely be ignored.

The Greeks knew exactly who Noah was. They called him Nereus, the “Wet One,” and Halios Geron, the “Salt-Sea Old Man.” Above, we see three different depictions of Nereus from ancient Greek vases. On all three he looks very old, he is seated as if on a throne, and he holds a scepter, a symbol of rule. The simple artistic communication: Here is the old man who ruled.Genesis 6:9 speaks highly of Noah’s character: “Noah is a just man. Flawless became he in his generations. With God walks Noah.”The ancient Greek poet Hesiod says essentially the same thing about Nereus: “But Pontos, the great sea, was father of truthful Nereus who tells no lies, eldest of his sons. They call him the Old Gentleman because he is trustworthy, and gentle, and never forgetful of what is right, but the thoughts of his mind are mild and righteous”(Theogony 233).
Note that Hesiod describes Nereus as the great sea’s eldest son; that is, the eldest of those who came through the Flood.The Book of Genesis does not name Noah’s wife, but the Greeks said that the wife of Nereus was the Oceanid Doris. What made her an Oceanid was the fact that she rode the ocean in the ark with Noah/Nereus and their family for nearly a year.
Greek artists chronicled the rise of their God-rejecting and serpent-exalting religion from Noah’s lifetime, and often depicted Noah/Nereus with the bottom half of a fish and/or holding a fish, signifying that this is the fish-man who brought humanity through the Flood. 2

2 The Parthenon Code: Mankind’s History in Marble by Robert Bowie Johnson, Jr. presents overwhelming evidence for a revolutionary and astounding new interpretation of ancient Greek myth and art. It is this...
3 Greek “myth” is not myth at all but rather the history of the human race told from the standpoint of the way of Kain (Cain).
4 Greek artists told the story of what happened in the ancient paradise...
5 The Greeks depicted the events leading up to Noah’s Flood, the disappearance of the line of Kain into the earth during the Flood, and Greek artists depicted Noah himself. 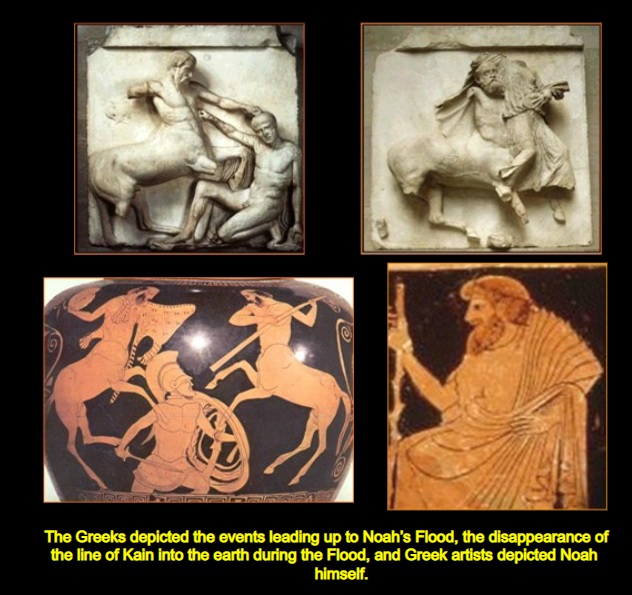 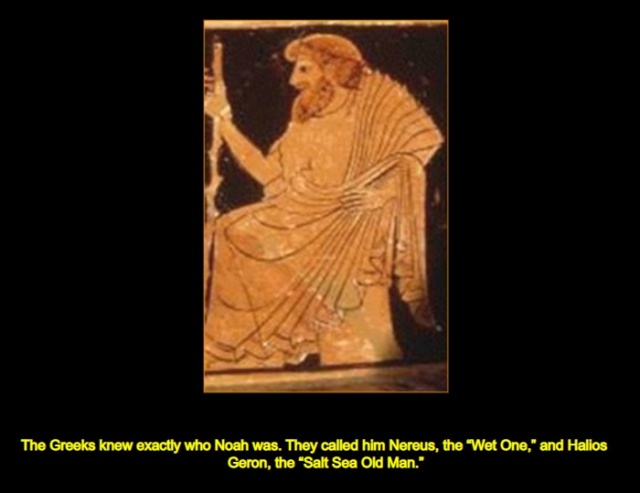 55 The Greeks depicted Noah often on vases.
56 Sometimes Greek artists depicted Noah as an old man with the bottom half of a fish, signifying that he had come through the Flood.
57 Sometimes they depicted him as a seated old man holding a fish.
58 And sometimes simply as an old man.
59 PART VII HERAKLES’ REBELLION AGAINST NOAH
60 Herakles, the great hero of the Greeks, was not an imaginary or mythical figure. He was a real man—the man who led the great rebellion against Noah and his God after the Flood.
61 Cush was the father of Nimrod, who grew to be a mighty warrior on the earth. I Chronicles 1:10 Herakles is the Greek version of the great rebel Nimrod. According to the Scriptures, Nimrod was the first man, after the Flood, “to be a mighty warrior on the earth.” Herakles’ given name was Alcaeus, meaning “mighty one.”
62 Herakles is Nimrod and Nimrod means “Rebel.” The only system to rebel against back then was Noah’s. Herakles and his followers fought to push Noah and his God out of the picture, and exalt instead mankind as the measure of all things.
63 On this vase-painting, Herakles threatens Noah with his club.
64 Here, Herakles pushes Noah aside.
65 And here, the vase-artist depicts Herakles bringing Noah and his rule to a halt.
66 On this ancient shield band panel, Herakles grabs Nereus, the Greek Noah. The artist made Noah’s bottom half a fish so we don’t miss the point that he came through the Flood.
67 Herakles demands to know something that only the Salt Sea Old Man can tell him. A flame and a snake come out of Noah’s head. Herakles demands to know how and where to find the enlightenment of the serpent.
68 Herakles’ first 11 labors and his other battles all had one objective—embodied in his 12th and final labor—getting back to the serpent-entwined tree in the ancient garden for another bite of the serpent’s apple.
69 The spirit of Athena guided Herakles in all his battles which ultimately led to the reestablishment of way of Kain.
70 And Athena rewarded the great hero after he had pushed Noah and his God out of the picture and reestablished the way of Kain.
71 PART VIII ATHENA THE REBORN SERPENT- FRIENDLY EVE
72 The Greeks recognized Athena as the reborn serpent-friendly Eve who reemerged victorious after the Flood.
73 In this rare and revealing partially damaged vase painting, Athena stands proudly by the tree receiving instructions from the serpent.
74 Hera is the original Eve of Genesis, but Athena also represents Eve—Eve worshipped as the one who brought the serpent’s enlightenment back to mankind after the Flood.
75 The Greeks depicted Athena as being born full-grown out of Zeus—a picture of Eve being born full-grown out of Adam.
76 The key to understanding Greek myth/art is making the Genesis connection. This fresco by Masaccio portrays the taking of the fruit from the serpent’s tree as shameful.
77 According to the Greek way of looking at mankind’s past, the taking of the fruit was a triumph for humanity. In this sculpture by Tegner, Athena is born full-grown out of Zeus just as Eve came out of Adam, and she has come out exulting in the serpent’s enlightenment!
78 Two opposite interpretations of the very same event.
79 The essence of the ancient Greek religious celebration is very simple: after the Flood, the reborn and victorious serpent-friendly Eve...
80 ... Nurtures the reborn line of Kain.
81 What are commonly believed to be a hodge-podge of strange and sometimes incomprehensible images painted and sculpted by ancient Greek artists, present to us, in reality, a coherent historical narrative—the story of who the Greeks were, and where they came from—a story that matches the Genesis account in convincing detail.


ANCIENT GREEKS KNEW ALL ABOUT EDEN, FALL, FLOOD BEFORE GENESIS WAS KNOWN AND MENTIONED THEM ALL IN THEIR MYTHOLOGY!