In most analyses of the fine-tuning of the force strengths and constants of nature, only one parameter is adjusted at a time (to make the problems more tractable). This would correspond to changing one dial at a time on our Universe-Creating Machine while leaving the other dials unchanged. Even taken individually, each of these examples of fine-tuning is impressive. But in the real universe the values of all the constants and force strengths must be satisfied simultaneously to have a universe hospitable to life. So for instance the strong nuclear force must be set to certain narrow limits for stars to produce carbon and oxygen in comparable amounts, for beryllium-8 to remain bound at least 10-16 seconds, to keep the deuteron bound, to allow a minimum periodic table for life, to keep the light abundant isotopes stable, and to keep the di-proton unbound. The range for each of these parameters is narrow. The range within which all of them are satisfied simultaneously is much smaller, like the bull’s-eye in the middle of an already tiny target. Add the required range for the weak force strength and the bull’s-eye becomes smaller still, and so on for the other forces. Add the specific requirements of simple life (water and carbon chemistries) and it becomes even smaller, and more so for advanced and then technological life. Eventually, we will have a set of equations, each describing a different constraint on the laws of nature that allows them to permit life.

Arguably the most impressive cluster of fine-tuning occurs at the level of chemistry. In fact, chemistry appears to be “overdetermined” in the sense that there are not enough free physical parameters to determine the many chemical processes that must be just so. Max Tegmark notes, “Since all of chemistry is essentially determined by only two free parameters,  and Beta [electromagnetic force constant and electron-to-proton mass ratio], it might thus appear as though there is a solution to an overdetermined problem with more equations (inequalities) than unknowns. This could be taken as support for a religion-based category TOE [Theory Of Everything], with the argument that it would be unlikely in all other TOEs” (Tegmark, 15). Tegmark artificially categorizes TOEs into type 1, “The physical world is completely mathematical,” and type 2, “The physical world is not completely mathematical.” The second category he considers as motivated by religious belief.

(Determining this complete set of equations may just be the single most important goal of science. We’ll leave that as an exercise for the reader.)32 While physicists still lack the theoretical know-how to do the complete calculation, it’s unlikely that simultaneously changing several physical constants or fundamental forces will lead to a universe as habitable as ours. Astronomer Virginia Trimble observed early in the debate on fine-tuning:

The changes in these properties required to produce the dire consequences are often several orders of magnitude, but the constraints are still nontrivial, given the very wide range of numbers involved. Efforts to avoid one problem by changing several of the constraints at once generally produce some other problem. Thus we apparently live in a rather delicately balanced universe, from the point of view of hospitality to chemical life.

If we modify the value of one of the fundamental constants, something invariably goes wrong, leading to a universe that is inhospitable to life as we know it. When we adjust a second constant in an attempt to fix the problem(s), the result, generally, is to create three new problems for everyone that we “solve.” The conditions in our universe really do seem to be uniquely suitable for life forms like ourselves, and perhaps even for any form of organic chemistry.

Changes in the relative strengths of gravity and electromagnetism affect not only cosmological processes but also galaxies, stars, and planets. The strong and weak nuclear forces determine the composition of the universe and, thus, the properties of galaxies, stars, and planets. As a result, we ultimately can’t divorce the chemistry of life from planetary geophysics or stellar astrophysics. Although we have only scratched the surface, it should be clear that
there are many examples of “cosmic-scale” fine-tuning in chemistry, particle physics, astrophysics, and cosmology. Most published discussions of such fine-tuning are limited to the requirements for life, but cosmic finetuning
extends well beyond mere habitability. 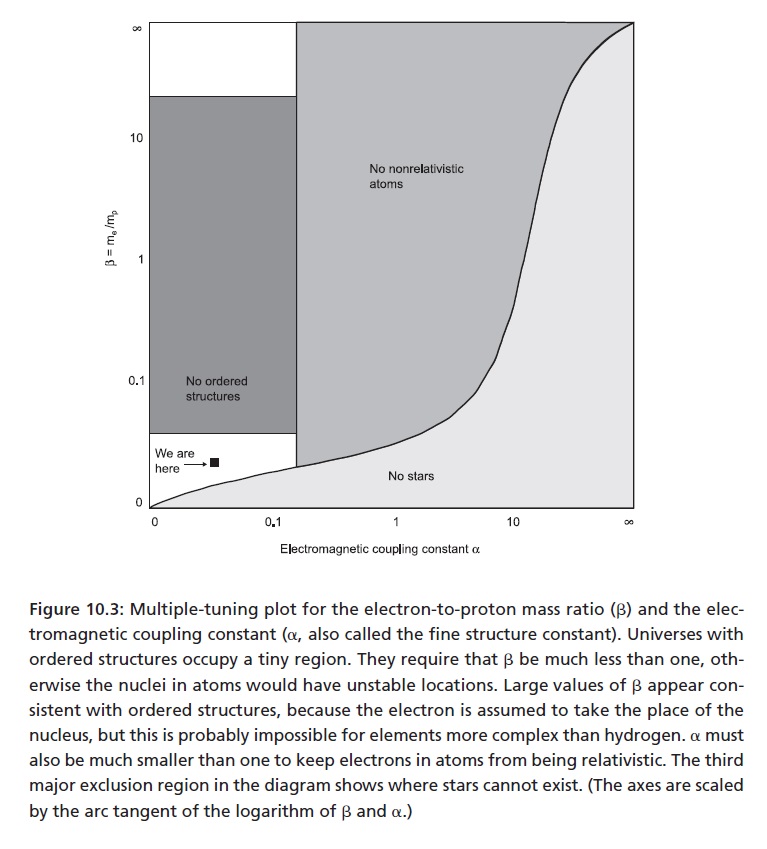 1. Guillermo Gonzalez and Jay W. Richards THE PRIVILEGED PLANET HOW OUR PLACE IN THE COSMOS IS DESIGNED FOR DISCOVERY page 206