A multi-structural and multi-functional integrated fog collection system in cactus Sun Apr 22, 2018 8:35 am

Biological kingdom offers the strategies of liquid dynamics that adapt to the natural environment. e.g., fog water collection controlled on biological surfaces such as spider silk, beetle back, plant leaf. They help researchers to understand the liquid behaviours, and offers theories to design materials used for droplet transport including surfaces with asymmetric structure, gradient wettability and additive energy to the systems

Cactuses are famous for their abilities to live in the desert where drought is normal and water evaporates so quickly. As has been reported, cactus spine covered with oriented spine and gradient grooves could drive droplet directionally3. Recently, we find that the scale-covered spines of cactus gymnocalycium baldianum (lives in the desert area of Argentina), the structure of which is totally different from the reported one, could also propel fog drops directionally with the assistance of the tilted scales and the splayed capillary tubes. In addition, the subsequent droplets could move more quickly than the first one because the surface adhesion has been greatly reduced by the thin liquid film trapped in the splayed capillary tubes after the past of the first droplet.

It is remarkable how some papers do not mention evolution. How comes?

The fast droplet transport without additional energy expenditure can be achieved on the spine of cactus (Gymnocalycium baldianum) with the assistance of its special surface structure: the cactus spine exhibits a cone-like structure covered with tilted scales. A single scale and the spine surface under it cooperatively construct a splayed capillary tube. The arrays of capillary tube formed by the overlapping scales build up the out layer of the spine. The serial drops would be driven by the asymmetric structure resulted from tilt-up scales-by-scales on the cone-shaped spine, and move directionally toward the bottom from top of spine, by means of the Laplace pressure in differences. In addition, after the past of the first droplet, thin liquid film of drop is trapped in the splayed capillary micro-tube on the surface of spine, which greatly reduces the friction of subsequential droplet transport in efficiency. This finding provides a new biological model which could be used to transport droplet spontaneously and directionally. Also this work offers a way to reduce the surface adhesion by constructing liquid film on the surface, which has great significance in prompting droplet transport efficiency. 2

of the water drops, may provide O. microdasys with an efficient fog collection system. The investigation into the structure–function relationship within this system may offer systematic opinions that can be used to design novel materials and devices to efficiently collect fog. 1 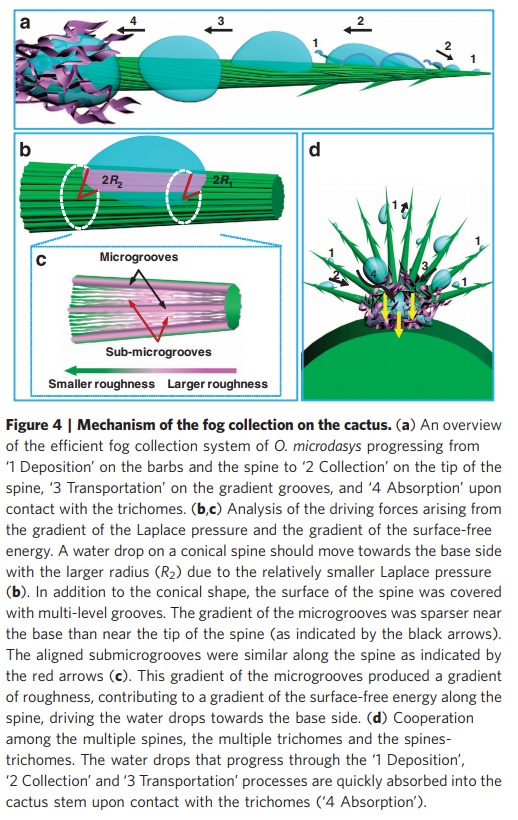 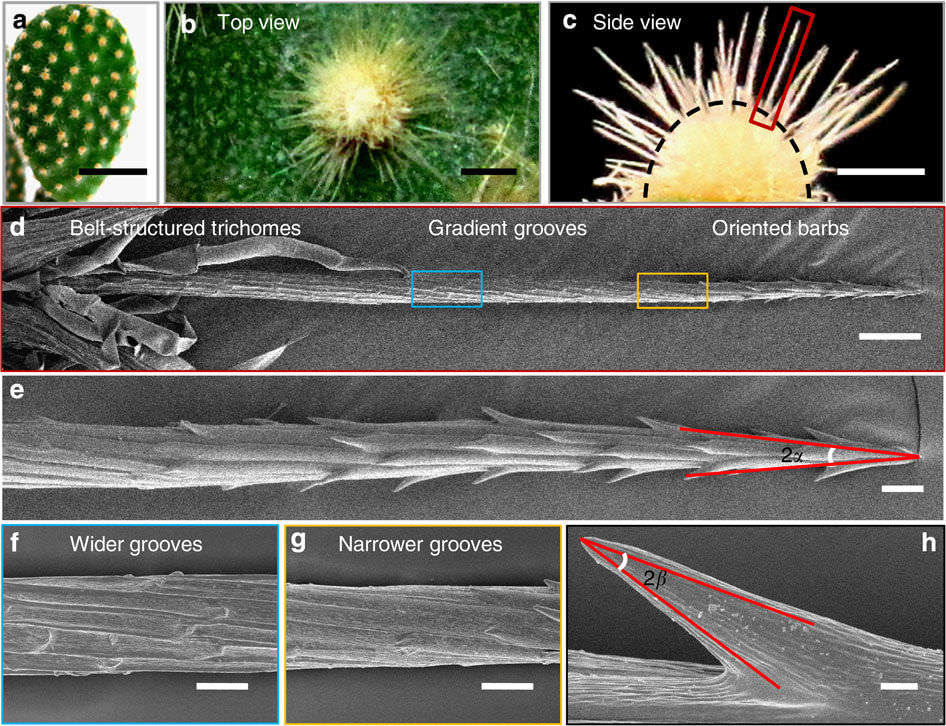 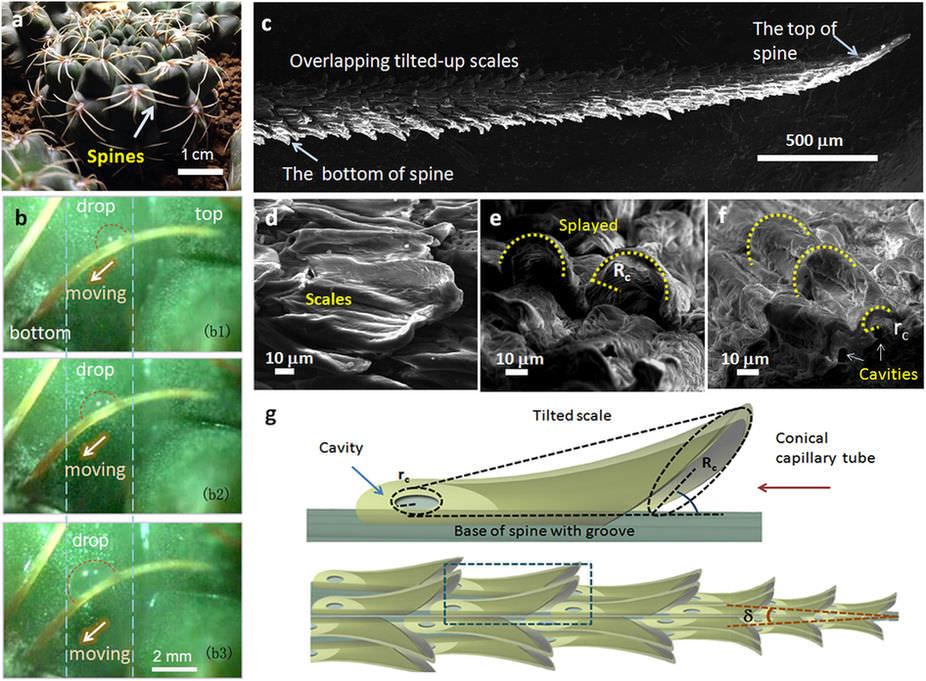 (a) Photo of Gymnocalycium baldianum cactus with clusters of 5–6 spines. (b) Optical observation of condensed drop moving on spine (Frame b1-b3). (c-f), ESEM images of the spine. The surface of the spine is covered with scales, and the tips of the scales tilt at an angle (α) of ~20°. Cone spine opens an apex-angle δ of ~15° (c). Each scale has a width of ~30–50 μm and a length of ~100–130 μm (d). The tilt-up tips of the scales open a semicircle with a radius (Rc) of ~20 μm (e). The cavities are formed between the scales and the surface of the spine with a radius (rc) of ~8 μm (f). (g) Illustration for the scale-covered spine with an apex-angle δ. The space between the scale and the surface of the spine forms a splayed capillary channel, opening different radius of Rc and rc in two ends. Under the scale, there are parallel grooves. 2

» The Human Nervous System: Evidence of Intelligent Design
» How Man Solves the Problem of Being a Multi-Cellular Organism
» Main topics on the structural complexity of the human body
» DNA replication of prokaryotes
»  Structural Organization of the Human Body