Defending the Christian Worldview, Creationism, and Intelligent Design » Palaentology » Opabinia - the strangest animal of the Cambrian

Opabinia - the strangest animal of the Cambrian

Opabinia - the strangest animal of the Cambrian


Wonderful life, STEPHEN JAY GOULD, page 24
Why is Opabinia, key animal in a new view of life, not a household name in all domiciles that care about the riddles of existence? In short, Harry Whittington and his colleagues have shown that most Burgess organisms do not belong to familiar groups, and that the creatures from this single quarry in British Columbia probably exceed, in anatomical range, the entire spectrum of invertebrate life in today's oceans. Some
fifteen to twenty Burgess species cannot be allied with any known group, and should probably be classified as separate phyla . Magnify some of them beyond the few centimeters of their actual size, and you are on the set of a
science-fiction film; one particularly arresting creature has been formally named Hallucigenia. For species that can be classified within known phyla, Burgess anatomy far exceeds the modern range. The Burgess Shale includes, for example, early representatives of all four major kinds of arthropods, the dominant animals on earth today-the trilobites (now extinct), the crustaceans (including lobsters, crabs, and shrimp), the chelicerates (including spiders and scorpions), and the uniramians (including insects).

But the Burgess Shale also contains some twenty to thirty kinds of arthropods that cannot be placed in any modern group. Consider the magnitude of this difference: taxonomists have described almost a million species
of arthropods, and all fit into four major groups; one quarry in British Columbia, representing the first explosion of multicellular life, reveals more than twenty additional arthropod designs! The history of life is a story of massive removal followed by differentiation within a few surviving stocks, not the conventional tale of steadily increasing excellence, complexity, and diversity.

Stephen C.Meyer, Darwins doubt, page 37:
Completely unique organisms such as the bizarre arthropod Opabinia—with its fifteen articulated body segments, twenty-eight gills, thirty flipper-like swimming lobes, long trunk-like proboscis, intricate nervous system, and five separate eyes—appear fully formed in the Cambrian strata along with representatives of other fundamentally different body plans and designs of equal complexity. Darwin, as we know, regarded the sudden appearance of the Cambrian animals as a significant challenge to his theory. Where natural selection had to bridge yawning chasms from relatively simple life-forms to exquisitely complex creatures, it would require great expanses of time.

Opabinia is an extinct stem-arthropod genus found in Cambrian fossil deposits. The only known species, O. regalis, is known from the Middle Cambrian Burgess Shale Lagerstätte of British Columbia, Canada. Fewer than twenty good specimens have been described; 3 specimens of Opabinia are known from the Greater Phyllopod bed, where they comprise less than 0.1% of the community. Opabinia was a soft-bodied animal of modest size, and its segmented body had lobes along the sides and a fan-shaped tail. The head shows unusual features: five eyes, a mouth under the head and facing backwards, and a proboscis that probably passed food to the mouth. Opabinia probably lived on the seafloor, using the proboscis to seek out small, soft food to scavenged. When the first thorough examination of Opabinia in 1975 revealed its unusual features, it was thought to be unrelated to any known phylum, although possibly related to a hypothetical ancestor of arthropods and of annelid worms. However other finds, most notably Anomalocaris, suggested that it belonged to a group of animals that were closely related to the ancestors of arthropods and of which the living animals onychophorans and tardigrades may also be members. In the 1970s there was an ongoing debate about whether multi-celled animals appeared suddenly during the Early Cambrian, in an event called the Cambrian explosion, or had arisen earlier but without leaving fossils. At first Opabinia was regarded as strong evidence for the "explosive" hypothesis. Later the discovery of a whole series of similar lobopod animals, some with closer resemblances to arthropods, and the development of the idea of stem groups suggested that the Early Cambrian was a time of relatively fast evolution but one that could be understood without assuming any unique evolutionary processes. 1 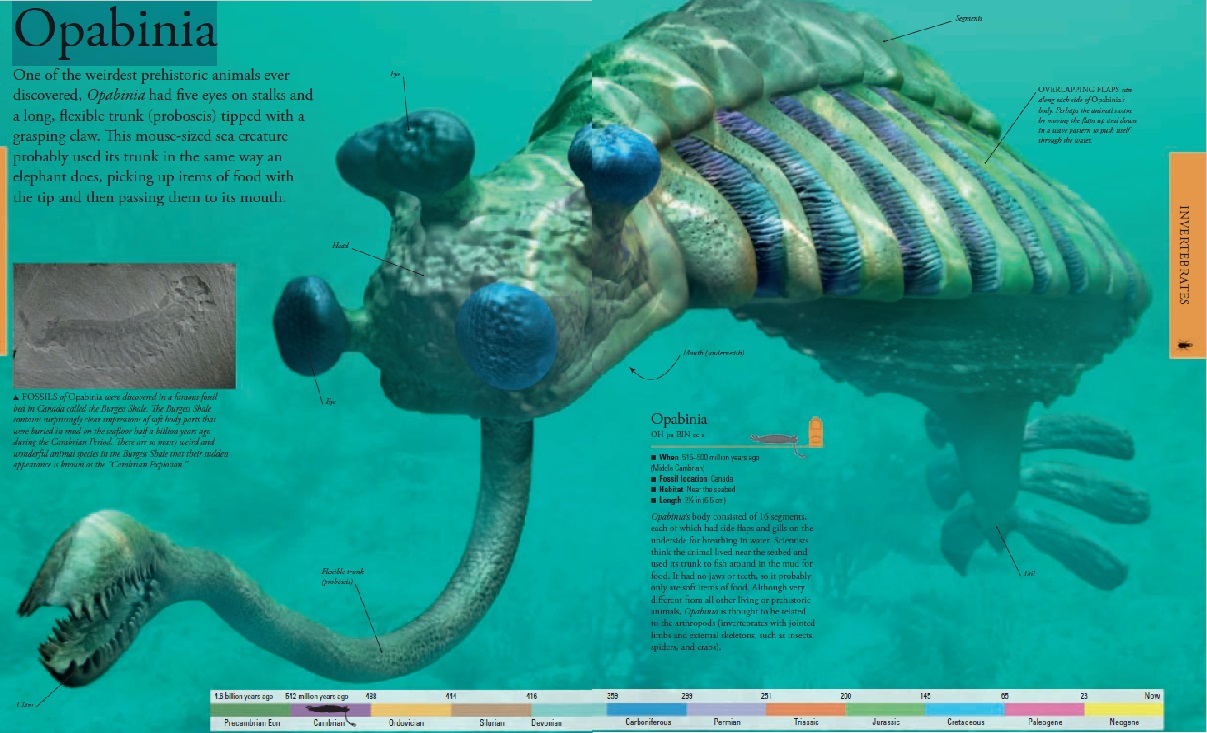 Opabinia is one of the more unusual looking Cambrian animals, with its long anterior proboscis, five eyes on top of the head, elongate body with wide swimming appendages and tail with overlapping flaps. Whittington's redescription of Opabinia heralded the presence of very unusual creatures among those under investigation from the Burgess Shale, a deposit in which, remarkably, soft-bodied forms were fossilized [1]. It led to a resurgence of interest in the origins of biodiversity in the oceans and the relationships between the various animal groups then and now. Research activity on the explosion of diversity during the Cambrian, and the forms fossilized in such exceptional preservations, has increased ever since. 2 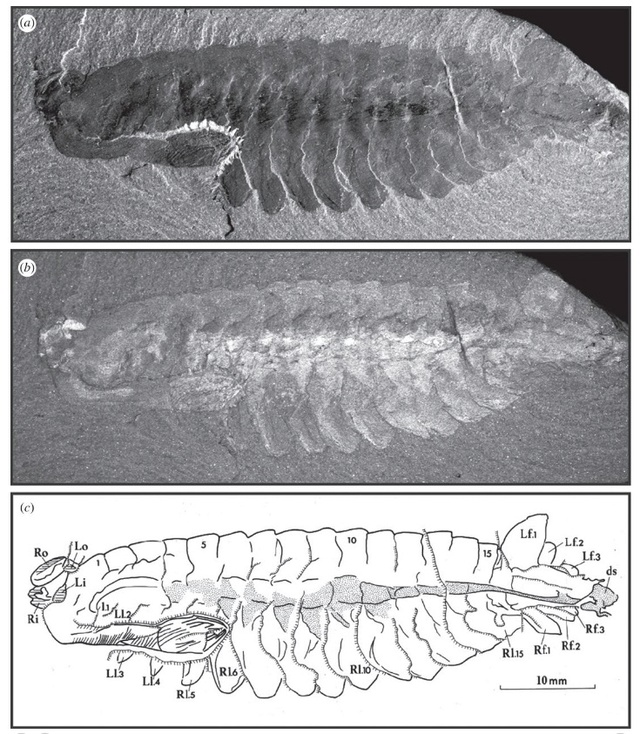 Opabinia regalis Walcott, 1912; USNM 155600 preserved in lateral view. (a,b) Counterpart ‘flipped’ horizontally to match (c), Whittington's [1, fig. 35] composite explanatory drawing of the part and counterpart; (a) is illuminated from a low angle and (b) from a high angle to generate reflection in the eyes, for example, showing the method Whittington used to illustrate different features of the Burgess Shale specimens. The needle-marks evident in (a) show where Whittington prepared the specimen to reveal the terminal spines on the ‘flexible frontal process’ or proboscis which is flexed backwards underneath the body. (c) Whittington's camera lucida drawing and interpretation. L and R indicate features on the left and right sides of the body; i and o, inner and outer eyes; l, lateral lobes of the trunk, numbered from the anterior; f, blades of the tail fan; ds, dark stain representing material that has ‘leaked’ beyond the body. 2 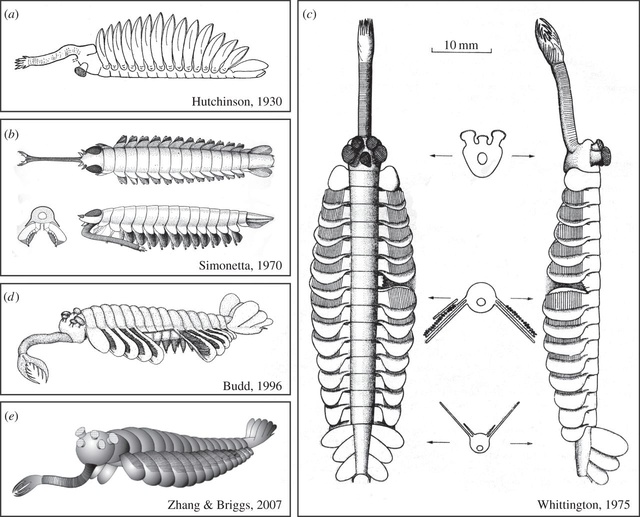 Major published reconstructions of Opabinia regalis Walcott, 1912 through time. Whittington's [1, fig. 82] version shows a dorsal and lateral view with the lobe and gill of segment 7 removed to show those of segment 8 in full. The position of the three cross sections of the body, with the outline of the gut internally, are indicated by the arrows. 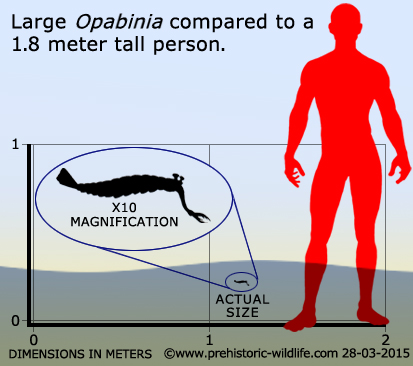 Perhaps the best word to describe Opabinia is bizarre.‭ ‬With five eyes,‭ ‬a forward facing proboscis a third of the length of the body and a mouth that is not only on the underside of the body but faces backwards,‭ ‬and you end up with a creature like no other we know of today.‭ ‬However when you look at Opabinia within the context of other Burgess Shale creatures such as Hallucigenia,‭ ‬Wiwaxia and Anomalocaris,‭ ‬then Opabinia actually begins to look quite normal. 3 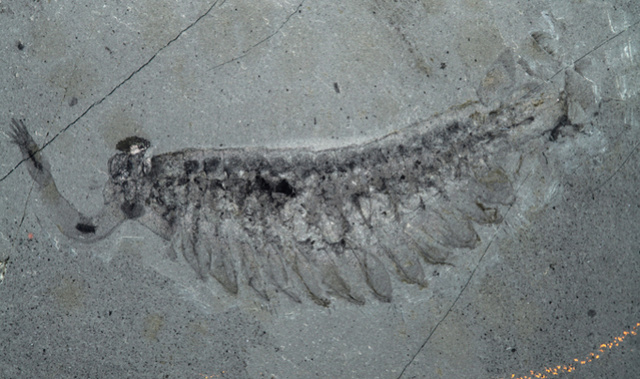 Like Opabinia, many fossils found in the Burgess Shale are difficult to classify. Part of the problem is that some species are poorly known - i.e., there is not enough well-preserved fossil material to describe the anatomy of the animals with certainty. Opabinia fossils are rare, with only 42 specimens currently (as of 2011) known from all collections, but overall its anatomy is relatively well preserved. Thus difficulties in interpreting the affinities of Opabinia are more related to its bizarre anatomy: Opabinia displays only some of the traits associated with familiar groups and possesses a combination of traits that remains at odds with what we know for any living or extinct organisms.

Because of the jointed claws on its proboscis, Opabinia is classified, along with another iconic animal from the Burgess Shale, Anomalocaris canadensis, as a primitive arthropod in a group called the anomalocaridids (see learning object Anomalocaris canadensis). Today, arthropods are the most diverse of all animal groups, a distinction they have probably held over the last 500 million years. Characterized by a segmented body, a rigid, articulated external covering (exoskeleton), and jointed limbs, arthropods are represented today by spiders, shrimps, insects, and millipedes. While Opabinia regalis does not closely resemble modern arthropods, it is believed to represent one of the most primitive species in the evolution of this group. 6 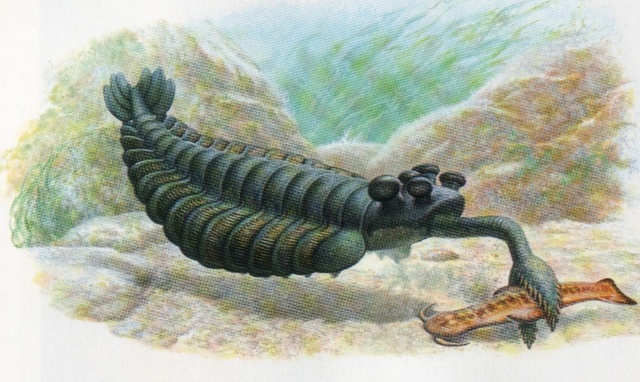 Opabinia is very rare Cambrian organism that closely resembled segmented worms. The few fossils found of these organisms lead researchers to believe that adult Opabinia did not grow more than three inches in length (UCMP 2010). The body consisted of many segmented portions that are believed to be fluid-filled. This would provide greater flexibility in their marine environment. The cranial portion of Opabinia contained five eyes that allowed the organism to see predators from various directions (Whittington 1974). Opabina also had two very distinct and facinating structures. The first was their arm-like proboscis that they probably used for feeding. The second interesting structure was the ventral lobes situated on each side of the organism; probably used to propel them through the water (Smithsonian Institution 2010). The use of their proboscis possibly suggests that they were bottom feeders; it may have allowed them to dig prey out of the ocean floor. The systematics of Opabinia are under debate; they may belong to a group called "Lobopods" that could be ancestral to Arthropods. 7 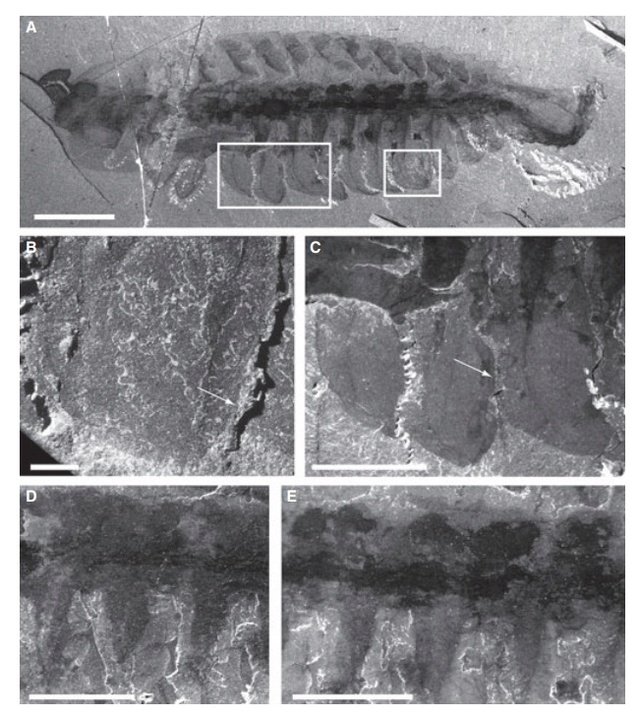 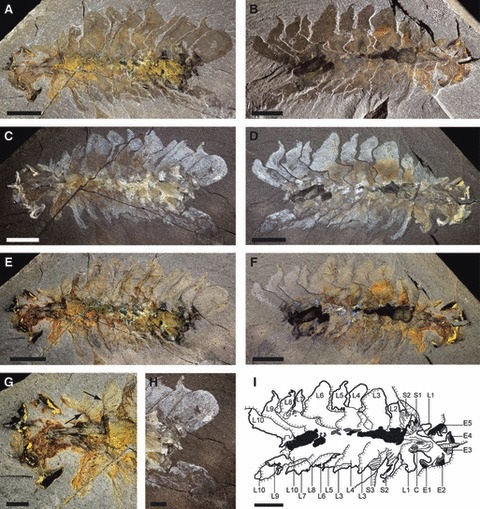 Defending the Christian Worldview, Creationism, and Intelligent Design » Palaentology » Opabinia - the strangest animal of the Cambrian