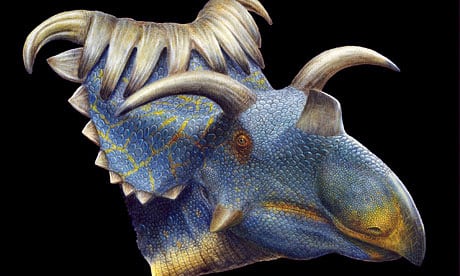 Fossil hunters have uncovered the remains of an ancient beast that can lay claim to the dubious title of the horniest animal ever to walk the Earth.
The creature lived 76 million years ago in the warm, wet swamps of what is now southern Utah and was remarkable in bearing 15 full-sized horns on its head.
The animal, named Kosmoceratops, had an enormous two metre-long skull, was five metres from snout to tail and weighed an estimated 2.5 tonnes.
"These animals are basically oversized rhinos with a whole lot more horns on their heads. They had huge heads relative to their body size," said Scott Sampson a researcher at the Utah Museum of Natural History.

Rhinoceros-sized dinosaur had horns the size of baseball bats  2 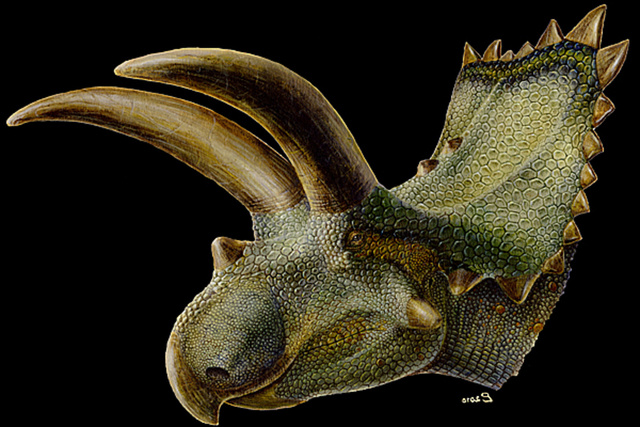 Unearthed in Mexico, a newly discovered species of dinosaur was found to have had horns bigger than any member of its group, including the legendary Triceratops.
A tubby dinosaur sporting horns each the length of a baseball bat roamed what is now Mexico some 72 million years ago.
Remains of the plant-eating dinosaur, now called Coahuilaceratops magnacuerna, were unearthed from the Cerro del Pueblo Formation in Coahuila, Mexico. Fossils belonging to both an adult and juvenile of the species were unearthed at the site.
When alive, the dinosaur would have been about the size of a rhinoceros, weighing 4 to 5 tons (3,600 to 4,500 kilograms), with horns estimated to be 3 to 4 feet long (about 1 meter). The horns are considered the longest of any ceratopsids, a group of plant-eating horned dinosaurs whose members include the famous Triceratops. 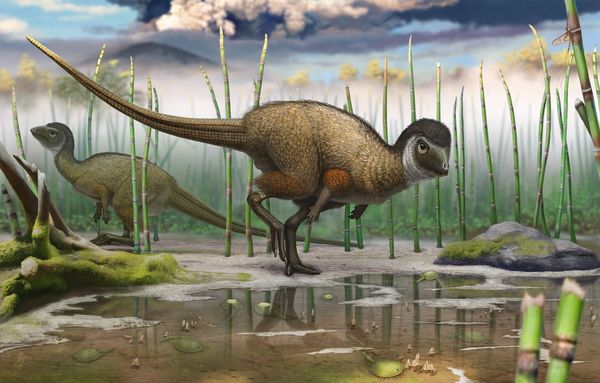 The discovery of the fossilised remains of a creature that looks a little like a giant beak-less chicken has led scientists to a striking hypothesis: at one time all dinosaurs had feathers. Researchers were aware that early flesh-eating dinosaurs had feathers, but the finding of the metre-long herbivore on a Siberian river bank has led experts to conclude that all dinosaurs from the Triassic period – more than 200m years ago – were feathered. 4
As dinosaurs evolved and in some cases developed armour, they lost the feathers, which were probably used for insulation and communication rather than flight. One of the scientists involved in the study of the new dinosaur, Professor Michael Benton, from the University of Bristol, said it was a very significant discovery. "This little chap from Siberia has feathers without a doubt. The conclusion we are tentatively putting forward is that feathers were present in all dinosaurs." Benton said the feathers kept dinosaurs warm, meaning that unlike cold-blooded lizards, they were able to operate in colder temperatures and at night. As dinosaurs grew bigger, feathers would have hindered them by making them too warm and compromised their defensive armour. 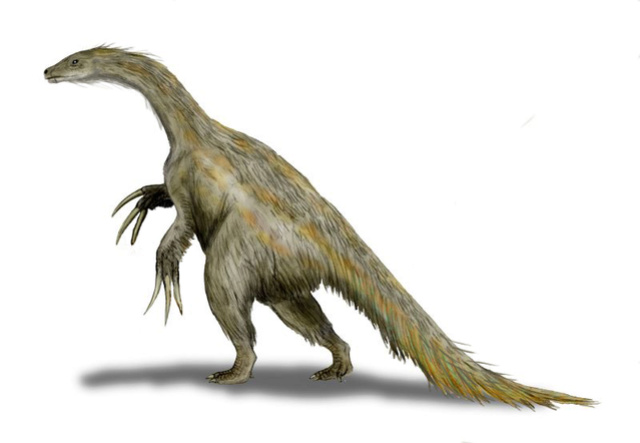 Scientists said yesterday they had unearthed the bones of two new species of dinosaur in New Mexico, including a bizarre one that sprang from the same lineage as the super carnivore Tyrannosaurus rex but ate plants.
The two - the sloth-like Nothronychus and a small carnivore from the coelurosaur family that has not yet been named - lived 90m years ago in a swampy forest similar to the bayous of Louisiana, palaeontologists Jim Kirkland and Doug Wolfe, who announced the discovery, said.
Both dinosaurs had bird-like characteristics and were probably covered with feathers, they said. They were found half a mile apart near New Mexico's border with Arizona, in an area dubbed the Zuni Basin, which had been a few miles from the shores of a sea 1,000 miles wide that split North America.
At that time - the middle of the Cretaceous period of the Mesozoic era - Earth was in the throes of extreme global warming that melted the polar ice caps and raised sea levels 300 metres higher than they are now.
Almost no dinosaur fossils have been found from that time. "This opens a window on a period that otherwise we wouldn't know about," said Tom Holtz, a University of Maryland palaeontologist who contributed to the research. 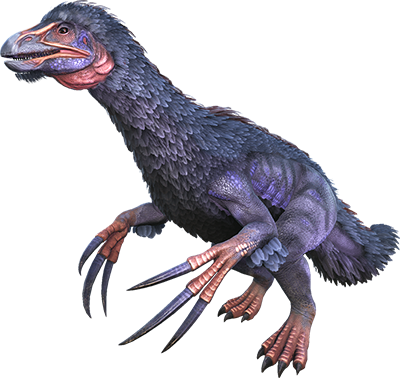 You may, perhaps, have heard of Therizinosaurus, a bizarre, long-clawed, pot-bellied dinosaur of central Asia 6 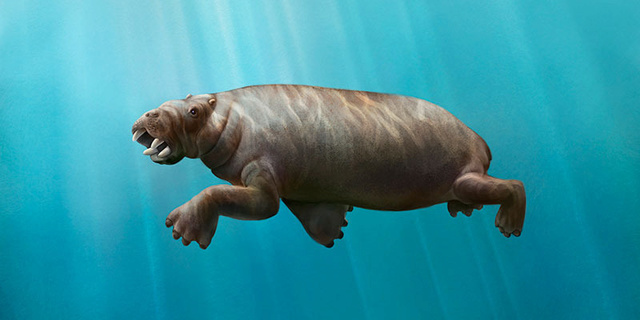 About 23 million years ago, an ancient hippo-size mammal used its long snout like a vacuum cleaner, suctioning up food from the heavily vegetated shoreline whenever it was hungry, a new study finds.
Fossils of the newfound species — found on the Aleutian Islands' Unalaska, the location of the popular reality TV show "Deadliest Catch" — show that it had a long snout and tusks. Its unique tooth and jaw structure indicates it was a vegetarian, said study co-author Louis Jacobs, a vertebrate paleontologist at Southern Methodist University in Texas. 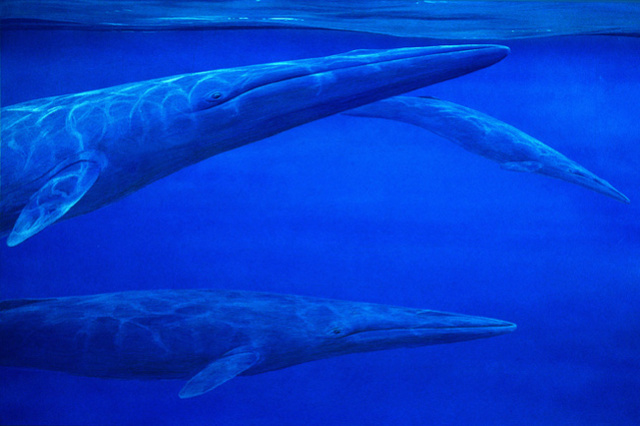 In the 1930s, or possibly earlier, a large chunk of bone was discovered in limestone at the Milburn Quarry near Milton in Otago (South Island, New Zealand). This block made it into the hands of University of Otago zoology professor W. B. Benham, who recognized that it was a skull of a cetacean - and in 1937 named it Lophocephalus parki, and assumed it was from a late surviving archaeocete whale. Later correspondence with other paleontologists abroad led him to realize that the name Lophocephalus was preoccupied by a beetle, and that the fossil actually represented a baleen whale - and he renamed it Mauicetus parki. In the 1940s and 1950s, Otago zoology professor Brian J. Marples began discovering a series of better preserved specimens of fossil whales in Oligocene marine rocks of the Waitaki Valley region of North Otago; three of these specimens were judged to be similar enough to be placed in the same genus, and he named these Mauicetus brevicollis, Mauicetus lophocephalus, and Mauicetus waitakiensis. The latter of these, M. waitakiensis, has recently been reinterpreted as representing a new genus of eomysticetid baleen whale (Tohoraata; see webpage on Tohoraata). Mauicetus lophocephalus had by far the most well preserved material, consisting of one half of a skull including the braincase and the base of the snout as well as earbones, a partial mandible, and many vertebrae. At the time of discovery, M. lophocephalus was the only anatomically informative archaic baleen whale to bridge the immense gap between Eocene archaeocetes and derived Miocene baleen whales - exhibiting toothless jaws like modern baleen whales, but an anteriorly placed blowhole, enormous attachment areas for jaw muscles and a tiny braincase as well as primitive earbones and an elongate neck. Unfortunately, the skull was misplaced sometime in the 1960s and has never been recovered, hampering informed discussion of this problematic taxon and its significance in whale evolution.

Dimetrodon and its sail 10 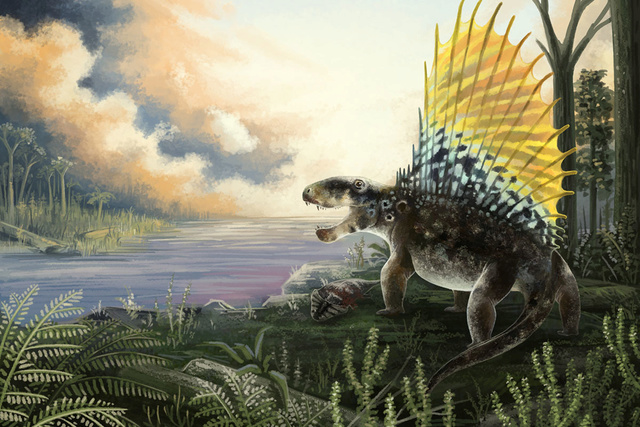 Sometimes in a toy dinosaur set you’ll find Dimetrodon, the one with the massive sail on its back. But Dimetrodon doesn’t belong with the dinosaurs. In fact, it’s not even a reptile. Although misidentified, Dimetrodon ranks as one of the most recognizable of extinct animals because the form of its sail is quite memorable. But it’s the sail’s function that is the real mystery.
Dimetrodon belongs to a group called the synapsids, which includes all living mammals and a menagerie of extinct animals extending back to about 305 million years ago. Being an ancient animal that looks different from modern-day mammals, non-mammalian synapsids are often mistaken for reptiles, and dinosaurs. Although synapsids and reptiles descend from a common ancestor, neither group is directly ancestral to each other. Plus, Dimetrodon became extinct about 60 million years before the first dinosaurs even evolved. That’s almost the same amount of time that separates humans from Tyrannosaurus. 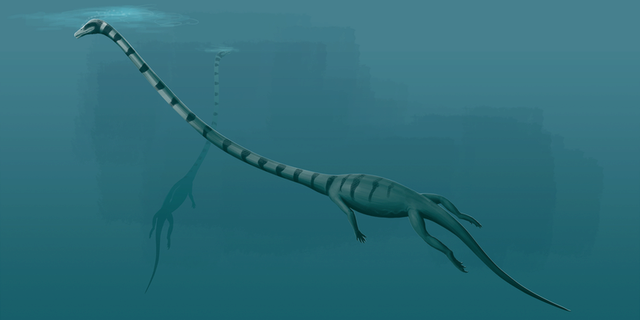 Originally mistaken for a flying reptile (pterosaur) when it was discovered in the 1800s, Tanystropheus had a neck that would put the Kayan giraffe women of Myanmar to shame.
Found in deposits in Europe, the Middle East and China, this semi-aquatic reptile had a neck twice as long as the rest of its body. It measured 20 feet from head to tail and lived during the Triassic Period of geologic time, some 240 million years ago. Paleontologists believe it was a piscivore, or fed on fish, based on the shape of the teeth and the fact that fish scales and squid hooks have been found near the stomach in Tanystropheus fossils. Its hind limbs were longer and more muscular than its front limbs and it probably wasn’t a very good swimmer. It may have hung out around the shoreline and walked along the bottom of the water bottom, in both environments surprising its prey with a swift vertical movement of its long neck.

Doryaspis ("Dart Shield") (also known by its synonym, "Lyktaspis") is an extinct genus of primitive jawless fish that lived in the Devonian period. Fossils have been discovered in Spitsbergen.The animals had a canteen-shaped body armor, and had large branchial plates that extended out and curved downward in a triangular shape, very similar to those of the pycnosteids. An element of the median oral plates (that would correspond to the lower lip or chin in gnathostomes) extends out in a long rod-shaped appendage, called the "pseudorostrum." The tail is long and slender, and has large rows of thick scales. In the type species, D. nathorsti, the lateral edges of the branchial plates and of the pseudorostrum are serrated. The second species, D. arctica, is smaller, and lacks serrated edges.

» Did birds evolve from dinosaurs ?
» Opabinia - the strangest animal of the Cambrian
» 30 Strangest Animal Mating Habits