Structural Organization of the Human Body

Body Systems & How They Work Together 1 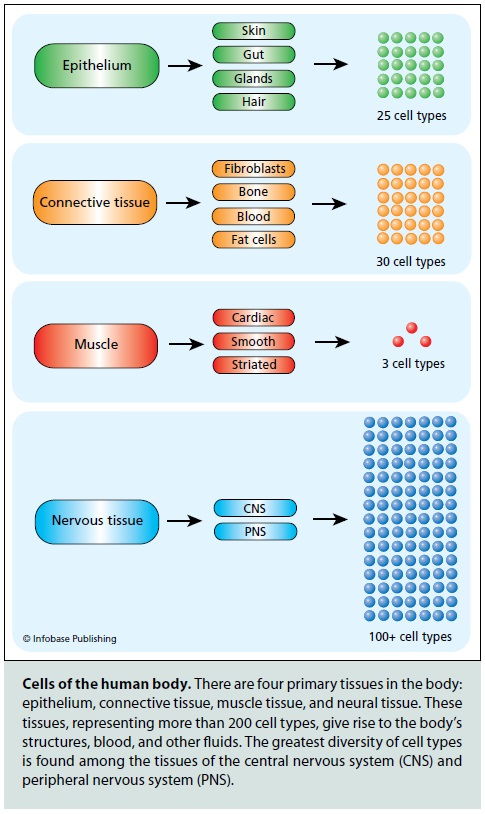 Cardiovascular and Respiratory Systems
The cardiovascular system with its heart-pump and network of arteries and veins shuttles oxygen-rich blood from the lungs to all of the body's organs and tissues. Cells throughout the body take their fill of oxygen and nutrients and dispose of carbon dioxide and waste products, which eventually flow back to the heart's right-sided chambers; then on to the lungs to exchange carbon dioxide with oxygen. Inhaled air passes through your nasal passages, throat and lung airways reaching tiny alveoli, the site of gas exchange. The newly oxygen-rich blood travels back from the lungs to the heart's left-sided chambers, where it gets pumped out at great pressure via arteries to reach the needy tissues once again. And so the cycle continues. The endocrine and nervous system, directly and indirectly, regulate the cardiovascular system.  One depends on the other, and both had to emerge together

Digestive and Excretory Systems
The digestive system is responsible for breaking down food into molecules small enough to be used by the body's cells and tissues. The food is broken apart through chewing and stomach churning, but also chemically -- through the stomach's acid-loving enzymes, and on to the small intestine, which receives pancreatic enzymes and juices specially tailored to dissolve and digest proteins, carbohydrates and fibers. Bile from the liver also works on fats. Though absorption of some drugs and alcohol may start in the stomach, absorption is mainly the function of the small intestines. Digestible nutrients pass through from the small intestines and their microvilli to capillaries and on to the liver for detoxification and further processing and conditioning, then out to the body.

Fibers, undigestible material, bile and loads of bacteria travel through the large intestines and out through the colon and rectum. The kidneys filter out wastes from the blood to form urine, which flows down the ureters and enters the urinary bladder. The bladder collects the urine and releases when full, out through the urethra.

Both digestive and excretory systems are regulated with input from the nervous system and endocrine system, and the cardiovascular system is inextricably linked with bowel and kidney function on multiple levels. which means, these systems had to emerge all together

Endocrine and Immune Systems
The endocrine system uses hormones, or chemical messengers across distances to effect target organs and tissues. Hormones are typically produced by a gland such as the pituitary, thyroid or gonads, and released into the bloodstream. The pituitary is is considered a master gland, since it governs the release of hormones by other glands. Unlike the nervous system, there is no physical "wiring" with neurons, however, and the hormones reach their target via the blood stream, where they exert their effect. The endocrine and nervous system may work together on the same organ, and each may influence the actions of the other system. The endocrine system largely governs many processes related to reproduction and sexual maturity, as well. The immune system is a network of cells, tissues and organs that work together to attack pathogens that try to invade your body. Bacteria, parasites and fungi that may cause infection meet a system of immune soldiers, including T-lymphocytes, macrophages and neutrophils. With time, the immune system's B-lymphocytes can produce antibodies against a new unknown invader. The immune system also plays a role in detecting non-self markers on cells that may arise in cancer cells and due to organ transplants. Stress, as perceived by the nervous system, can have a remarkable impact on the immune system and also the digestive system, which happens to be another major site of immune cell activity.
The endocrine and nervous system are interdependent since one influences the action of the other system

Skeletal and Muscular Systems
The system that provides your body's shape is the skeletal system, and it is made up of cartilage and bone. There are 206 bones in the human skeleton that provide a hard framework able to support the body and protect the organs that they surround. Cartilage provides support with flexibility and resistance, and acts as padding to soften the pressure that is exerted from the bones. Movement in the body is the result of muscle contraction; when muscles combine with the action of joints and bones, obvious movements are performed, such as jumping and walking. The contraction of muscles provides the body posture, joint stability and heat production.
Muscles, bones, the nervous system, and the cardiovascular system are interdependent. One has no function without the other. 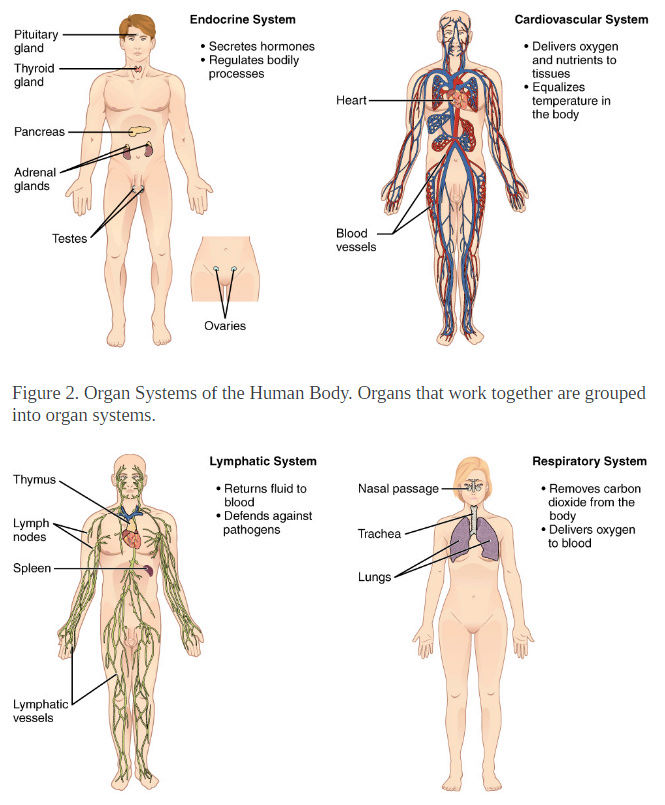 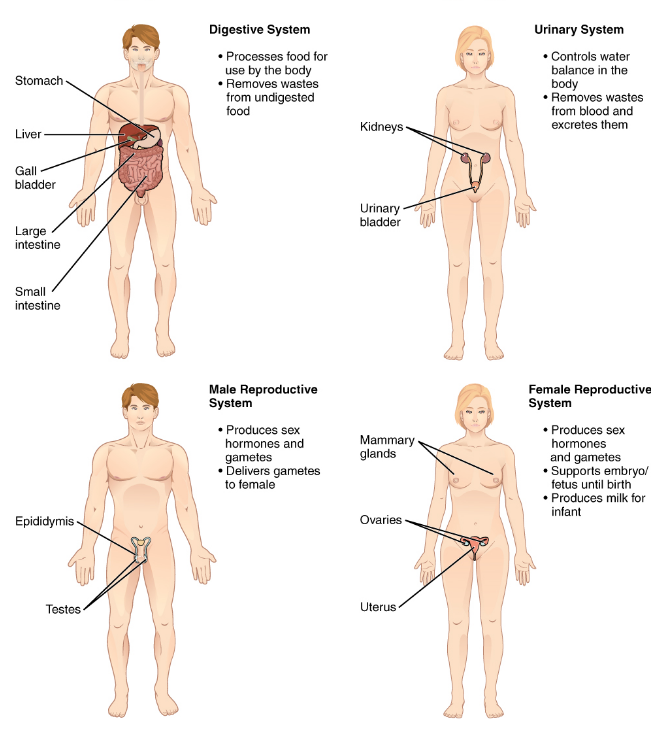 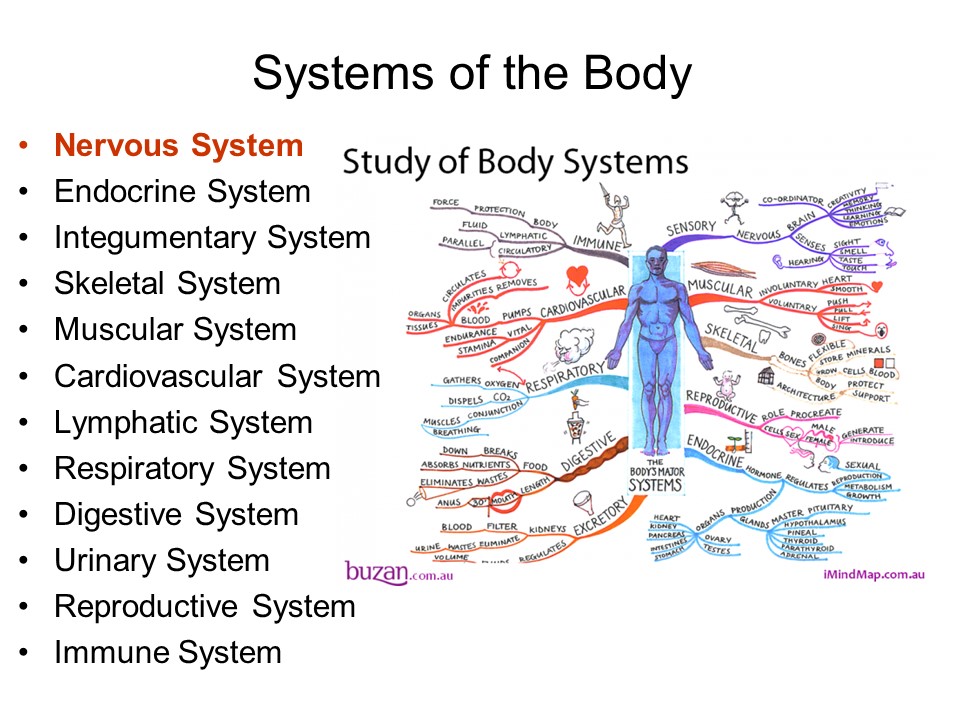 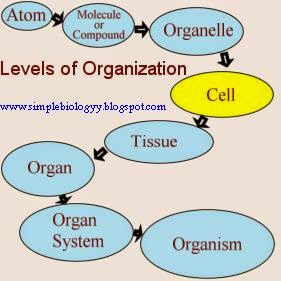