Imagining a universe, slightly different to our own. Let’s just play with one number and see what happens: the mass of the down quark. Currently, it is set to be slightly heavier than the up quark.

That heaviness has consequences. The extra mass corresponds to extra energy, making the neutron unstable. Around 15 minutes after being created, usually in a nuclear reactor, neutrons break down. They decay into a proton and spit out an electron and a neutrino. Protons, on the other hand, appear to have an infinite lifespan.

This explains why the early universe was rich in protons. A single proton plus an electron is what we know as hydrogen, the simplest atom. It dominated the early cosmos and even today, hydrogen represents 90% of all the atoms in the universe. The smaller number of surviving neutrons combined with protons, losing their energy to become stable chemical elements.

Now let’s start to play. If we start to ratchet up the mass of the down quark, eventually something drastic takes place. Instead of the proton is the lightest member of the family, a particle made of three up-quarks usurps its position. It’s known as the Δ++. It has only been seen in the rubble of particle colliders and exists only fleetingly before decaying. But in a heavy down-quark universe, it is Δ++ that is stable while the proton decays! In this alternative cosmos, the Big Bang generates a sea of Δ++ particles rather than a sea of protons. This might not seem like too much of an issue, except that this usurper carries an electric charge twice that of the proton since each up-quark carries a positive charge of two-thirds.

As a result, the Δ++ holds on to two electrons and so the simplest element behaves not like reactive hydrogen, but inert helium.

This situation is devastating for the possibility of complex life, as in a heavy down-quark universe, the simplest atoms will not join and form molecules. Such a universe is destined to be inert and sterile over its entire history. And how much would we need to increase the down quark mass to realize such a catastrophe? More than 70 times heavier and there would be no life. While this may not seem too finely tuned, physics suggests that the down-quark could have been many trillions of times heavier. So we are actually left with the question: why does the down-quark appear so light?

Things get worse when we fiddle with forces. Make the strength of gravity stronger or weaker by a factor of 100 or so, and you get universes where stars refuse to shine, or they burn so fast they exhaust their nuclear fuel in a moment. Messing with the strong or weak forces delivers elements that fall apart in the blink of an eye, or are too robust to transmute through radioactive decay into other elements,

Examining the huge number of potential universes, each with their own unique laws of physics, leads to a startling conclusion: most of the universes that result from fiddling with the fundamental constants would lack physical properties needed to support complex life.

The electron, the proton, and the quark are all entities within the realm of particle hence quantum physics. All three carry an electrical charge. All three have mass. After those observations, things get interesting, or messy, depending on your point of view. The electric charge of the proton is exactly equal and the opposite of the electric charge on the electron, despite the proton being nearly 2000 times more massive. There’s no set-in-concrete theoretical reason why this should be so. It cannot be determined from first principles, only experimentally measured. 2

An electron has a negative charge exactly equal and opposite to that of a proton. Note: the charge is exactly equal, even though the proton has a far greater mass than the electron (some 2000 times heavier in fact, not that there has to be of necessity any relationship between mass and charge).

Now that’s strange since the electron is a fundamental particle but the positively charged proton is a composite particle, made up of a trio of quarks (as is the neutron with no net charge). The proton has two quarks each with a positive 2/3rds charge (up quark) and one quark with a negative 1/3rd charge (down quark) for an overall balance of one positive charge. (The neutron, on the other hand, has one up quark with a positive 2/3rds charge and two down quarks each with a negative 1/3rd charge, for an overall balance of zero charge – neither positive nor negative.)

Further, the force particle that governs the electron is the photon; that which governs the quarks inside the proton and the neutron is the gluon, which further differentiates the two things – quarks and electrons. In any event, if you could have a composite particle of a trio of negative 1/3rd down quarks, if that were the case, and it is the case, and it’s called the Negative Delta, you’d also need a composite particle that’s the fusion of a trio of positive 2/3rds up quarks for an overall charge of plus two. To the best of my knowledge, there is only one such critter in the particle zoo and it’s called the Doubly Positive Delta. I’m sure you’ve never heard of these Delta particles, which goes to show how much bearing or impact they have on life, the Universe, and everything.

In case you were wondering, there would be an anti-quark of minus 2/3rds charge, and an anti-quark of a positive 1/3rd charge, to yield an antiproton and an anti-neutron. The anti-proton would of course have an equal and opposite charge to the anti-electron (which has a formal name – the position). So things are equally as mysterious in the realm of the anti-world.

Question: How do you get 1/3rd or 2/3rds of an electric charge in any event? Of course one could just multiply by three and that does away with the fractions, but that doesn’t resolve the larger issues, like for that matter, what exactly is electric charge and how does it come to be?

Presumably, quarks inside of protons and neutrons, and electrons could have taken on any old values of charge, separate and apart, but didn’t. Why? Is this evidence for a Multiverse (where anything that can happen does happen in all possible combinations); intelligent design (which does not of necessity imply a deity – just a creator, or a programmer); or just a coincidence?

Equal and opposite charges between the proton and the electron would just seem to be one of Mother Nature’s little mysteries. Why is it so? What does it mean? Is it one of those numerous examples of fine-tuning that makes life, and thus you, possible? You could imagine the consequences if the electric charge on the proton and on the electron were different!

But something else is odd here. The proton, as noted above, is 2000 times more massive than the electron, but if you weigh up the trio of quarks* that make up the proton, the proton should only come in at roughly 20 times that of an electron. That’s 100 times too small. So where do the other 1980 bits of mass come from? Well the gluon that holds the proton’s (and the neutron’s) quarks together, like the electron’s photon and gravity’s (theoretical or hypothetical) graviton, have no rest mass that adds to the total. But the internal jiggling of the quarks and their gluon companions does add a bit more mass to the proton. Remember that motion equals energy which equals mass. Finally, that leaves the vacuum energy to fill the remaining gap. 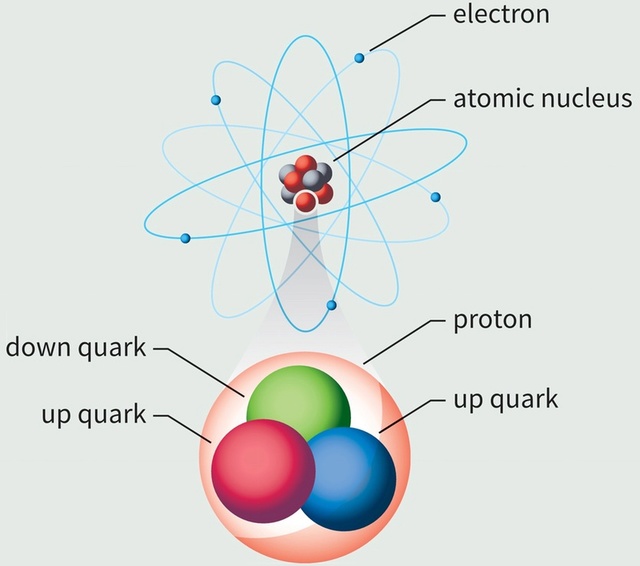