Defending the Christian Worlview, Creationism, and Intelligent Design » Molecular biology of the cell » Metabolism » Adenine synthesis in a prebiotic earth

Adenine synthesis in a prebiotic earth

Adenine is one of the most important organic molecules for life as we know it today.

Adenine is an integral part of DNA, RNA, and ATP. DNA, as you might know, is the genetic code used for cellular life on earth. It is through the precise inheritance of on organism's DNA from its parent that the traits of an organism are passed on. Here is the partial structure of DNA with an Adenine group attached. Adenine is a purine. Purines are six-membered rings attached to five membered rings. When Adenine is attached to DNA, it forms a bond with another molecule called Thymine, a pyrimidine, on the other side of the DNA strand. It is these bonds which give DNA its double-helix structure. The sequence of DNA, or the order in which nucleotides are placed, allows for the diversity among all living organisms. The importance of Adenine to RNA is similar to that of DNA.

Besides DNA and RNA, Adenine is also an important part of adenosine triphosphate, or ATP. Adenosine triphosphate is the nitrogenous base adenine bonded to a five carbon sugar. This molecule is important because it has the ability to phosphorylize, or add a phosphate group to, other molecules. This transfer of a phosphate group allows energy to be released. It is this energy which is used by cells in living organisms. This is why the molecules ATP, and its nitrogenous base Adenine, are so important.

"Adenine synthesis is perhaps the best example of an irreducibly complex system that can be found in life ..."
the process doesn't work unless all 11 enzymes are present.

Adenine synthesis requires unreasonable HCN concentrations. Adenine deaminates with a half-life of 80 years (at 37°C, pH 7). Therefore, adenine would never accumulate in any kind of "prebiotic soup." The adenine-uracil interaction is weak and nonspecific, and, therefore, would never be expected to function in any specific recognition scheme under the chaotic conditions of a "prebiotic soup." 1


Shapiro also critically analyzed prebiotic simulation experiments that produced the DNA and RNA component adenine. As with cytosine, he showed that adenine formation on early Earth (by currently recognized prebiotic routes) could not reasonably have occurred, for many of the same reasons. 2 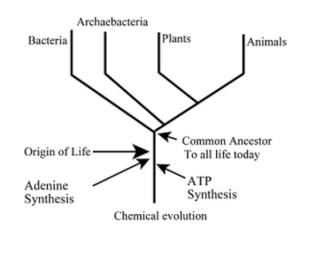 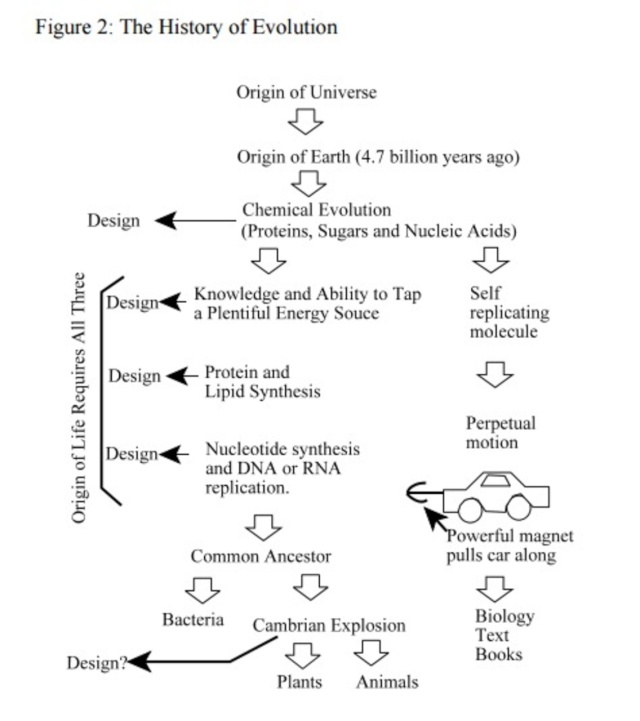 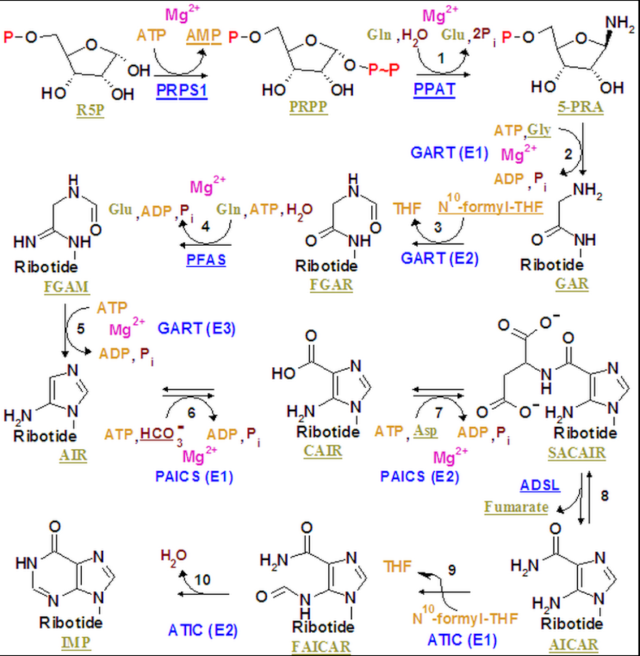 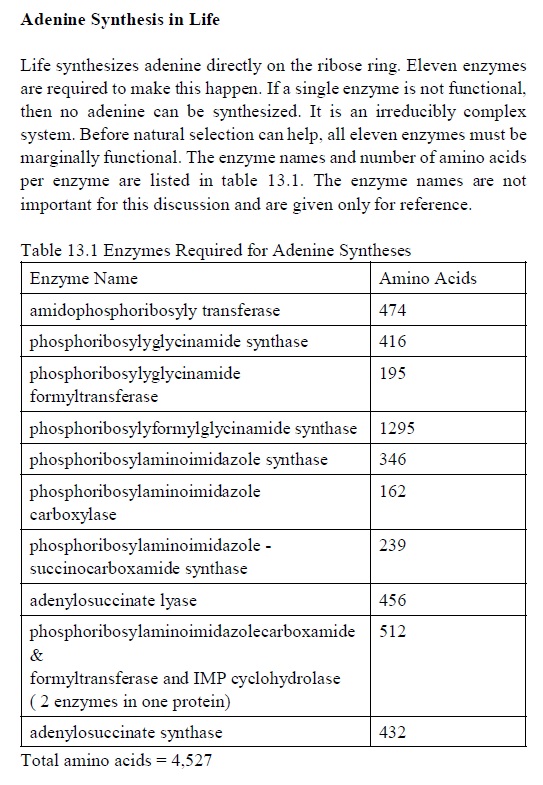 Many accounts of the origin of life assume that the spontaneous synthesis of a self-replicating nucleic acid could take place readily. Serious chemical obstacles exist, however, which make such an event extremely improbable. Prebiotic syntheses of adenine from HCN, of D,L-ribose from adenosine, and of adenosine from adenine and D-ribose have in fact been demonstrated. However these procedures use pure starting materials, afford poor yields, and are run under conditions which are not compatible with one another. Any nucleic acid components which were formed on the primitive earth would tend to hydrolyze by a number of pathways. Their polymerization would be inhibited by the presence of vast numbers of related substances which would react preferentially with them. It appears likely that nucleic acids were not formed by prebiotic routes

Reaction pathways proposed for the prebiotic synthesis of this building block start with HCN in alkaline (pH 9.2) solutions of NH4OH. 4 These reactions give small yields of adenine (e.g., 0.04%) and other nitrogenous bases provided the HCN concentration is greater than 0.01 M. However, the reaction mixtures contain a great variety of nitrogenous substances that would interfere with the formose reaction. Therefore, the conditions proposed for the prebiotic synthesis of purines and pyrimidines are clearly incompatible with those proposed for the synthesis of ribose. Moreover, adenine is susceptible to deamination and ring-opening reactions (with half-lives of about 80 years and 200 years respectively at 37º C and neutral pH), making its prebiotic accumulation highly improbable13. This makes it difficult to see how any appreciable quantities of nucleosides and nucleotides could have accumulated on the primitive Earth. If the key components of nucleotides (the correct purines and pyrimidines, ribose, and phosphate) were not present, the possibility of obtaining a pool of the four beta-D-ribonucleotides with correct linkages would be remote indeed.

If this postulate, the first and most crucial assumption, is not valid, however, then the entire hypothesis of an RNA World formed by natural processes becomes meaningless.

Defending the Christian Worlview, Creationism, and Intelligent Design » Molecular biology of the cell » Metabolism » Adenine synthesis in a prebiotic earth