Defending the Christian Worlview, Creationism, and Intelligent Design » Photosynthesis, Protozoans,Plants and Bacterias » Assembling and maintaining the Photosystem II complex in chloroplasts and cyanobacteria

Assembling and maintaining the Photosystem II complex in chloroplasts and cyanobacteria

Imagine a car factory. Robots mount the cars there, almost without any human intervention. All automatic. Like in a production line.

Plants, algae and cyanobacteria grow because of their ability to use sunlight to extract electrons from water. This vital reaction is catalysed by the Photosystem II (PSII) complex, a large multisubunit pigment protein complex embedded in the thylakoid membrane. Recent results show that assembly of PSII occurs in defined regions of the membrane system.

Nano roboters ( the assembly factor proteins ) build the nano machines, like the PSII subunit, the oxygen evolving complex, ( which splits water utilizing energy from the sun to split water into protons, electrons and oxygen ) ,beside  a large number of proteins, pigments, lipids and ions, in a highly coordenated and extremely precise, step-wise fashion. It  proceeds through a number of distinct assembly intermediates.    And when the job is done , they go away, they are not part and  component of fully assembled monomeric and dimeric core complexes.

All these indispensable subunits  are assembled together :

Now imagine, the car factory suddenly gets destroyed partially because of a fire. Firemen immediately come and stop the fire. The same happens inside of leaves. But, differently as with the car factory, where the firemen have to be called to come and do the job.

Explaining the make of the Flagellum is nothing compared to this one....Not only must the biosynthesis and make of the subunits, cofactors etc. be explained , but also the machinery to build the factory complex......


Proponents of naturalism say, that it all was build up without any intelligence behind it.
When you see a car factory, and all these robots, such a nonsense would not even pass through your head. But when it happens in nature, you don't need a second to take it as granted, as if it would be something normal ??


Assembling and maintaining the Photosystem II complex in chloroplasts and cyanobacteria

Recent results show that assembly of PSII occurs in a step-wise fashion in defined regions of the membrane system, involves conserved auxiliary factors and is closely coupled to chlorophyll biosynthesis.

During biogenesis the large number of proteins, pigments, lipids and ions in PSII must beassembledextremely precisely.PSII is also prone to irreversible damage by sunlight at all light intensities. A PSII repair cycle operates to selectively remove and replace damaged subunits, primarily the D1 subunit, within PSII thereby helping to maintain PSII activity

Assembly of PSII is highly co-ordinated and proceeds through a number of distinct assembly intermediates. Associated with these assembly complexes are proteins that are not found in the final functional PSII complex. Structural information and possible functions are beginning to emerge for several of these 'assembly' factors, notably Ycf48/Hcf136, Psb27 and Psb28.

My point :
how could these assembly intermediates be result of evolution, faced the fact that they have no function outside and beside building the PSII complex ?
How could they find out through evolution, how the subunits would have to be mounted in the right sequence, order, and at the right place ? what survival advantage would that bring to these intermediates ? Survival is only granted as a whole of the fully assembled ans working PSII complex.

Oxygenic photosynthesis produces various radicals and active oxygen species with harmful effects on photosystem II (PSII). Such photodamage occurs at all light intensities. Damaged PSII centres, however, do not usually accumulate in the thylakoid membrane due to a rapid and efficient repair mechanism.

My point:
unless this repair mechanism would have not been in place right from the beginning, PSII probably would not be able to function in order to sustain life of the plant, algae, or bacterium for enough time. How could it evolve separately ? That is a interdependent system.


The PSII alone would have no function, but the whole Z-Scheme must be in place, with all nano machines, light harvesting complexes, oxygen evolving complex, Photosystem complexes, subunits, ATP Synthase, Calvin Cycle, Rubisco , Thykaloid membrane in place to form a proton gradient etc. Thats a highly complex  interdependent system. Take away one part, like chlorophyll molecules, and the whole system ceases to function..... How do you imagine it to arise through evolution ? And why and how after all, would natural processes select such a energy intesive and extremely complex way like water splitting ?

The excellent design ( :=))   )  of PSII gives protection to most of the protein components and the damage is most often targeted only to the reaction centre D1 protein. Repair of PSII via turnover of the damaged protein subunits is a complex process involving

Photosynthetic water splitting involves highly oxidative chemistry, which is accomplished by a unique PSII complex. PSII converts light energy into chemical form using water as a source of electrons and liberating molecular oxygen as a side product. Light is a harmful substrate for the water-splitting PSII complex, exposing its protein subunits to structural damage.

A number of protective systems exist in the thylakoid membrane and surrounding stroma to dissipate excess light energy and to scavenge various radicals and active oxygen species.

My point :
how could this regulation be result of evolution ? unless the regulation mechanism were not fully in place and working, it would have no function
thats just a few things to name....

Re: Assembling and maintaining the Photosystem II complex in chloroplasts and cyanobacteria Sat Mar 08, 2014 5:07 am

Posts : 6121
Join date : 2009-08-09
Age : 54
Location : Aracaju brazil
The Cyanobacterial Homologue of HCF136/YCF48 Is a Component of an Early Photosystem II Assembly Complex and Is Important for Both the Efficient Assembly and Repair of Photosystem II in Synechocystis sp. PCC 6803

FtsH-mediated repair of the photosystem II complex in response to light stress Sat Mar 08, 2014 6:12 am

A common feature of light stress in plants, algae, and
cyanobacteria is the light-induced damage to the pho-
tosystem II complex (PSII), which catalyses the photosyn-
thetic oxidation of water to molecular oxygen. A repair
cycle operates to replace damaged subunits within
PSII, in particular, the D1 reaction centre polypeptide,
by newly synthesized copies. As yet the molecular de-
tails of this physiologically important process remain
obscure. A key aspect of the process that has attracted
much attention is the identity of the protease or prote-
ases involved in D1 degradation. The results are sum-
marized here of recent mutagenesis experiments that
were designed to assess the functional importance of
the DegP/HtrA and FtsH protease families in the cya-
nobacterium Synechocystis sp. PCC 6803. Based on
these results and the analysis of Arabidopsis mutants,
a general model for PSII repair is suggested in which
FtsH complexes alone are able to degrade damaged
D1.
Key words: Cyanobacteria, DegP/HtrA prote

Assembly of PSII is highly co-ordinated and proceeds through a number of distinct assembly intermediates. Associated with these assembly complexes are proteins that are not found in the final functional PSII complex. Structural information and possible functions are beginning to emerge for several of these ‘assembly’ factors, notably Ycf48/Hcf136, Psb27 and Psb28. A number of other auxiliary proteins have been identified that appear to have evolved since the divergence of chloroplasts and cyanobacteria. The repair of PSII involves partial disassembly of the damaged complex, the selective replacement of the damaged sub-unit (predominantly the D1 sub-unit) by a newly synthesized copy, and reassembly. It is likely that chlorophyll released during the repair process is temporarily stored by small CAB-like proteins (SCPs). A model is proposed in which damaged D1 is removed in Synechocystis sp. PCC 6803 by a hetero-oligomeric complex composed of two different types of FtsH sub-unit (FtsH2 and FtsH3), with degradation proceeding from the N-terminus of D1 in a highly processive reaction. It is postulated that a similar mechanism of D1 degradation also operates in chloroplasts. Deg proteases are not required for D1 degradation in Synechocystis 6803 but members of this protease family might play a supplementary role in D1 degradation in chloroplasts under extreme conditions.

YCF48 was proposed to act as an assembly factor that is transiently bound to PSII assembly intermediate(s), but is not a component of fully assembled monomeric and dimeric core complexes. 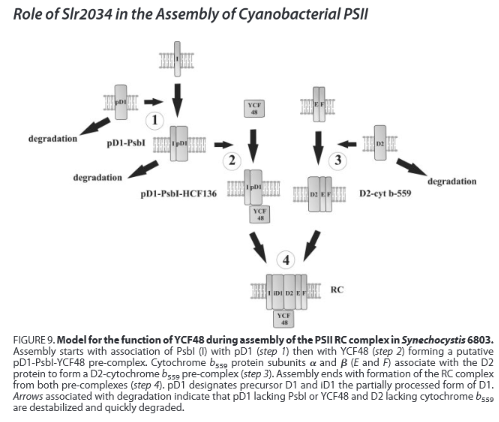 Re: Assembling and maintaining the Photosystem II complex in chloroplasts and cyanobacteria

Defending the Christian Worlview, Creationism, and Intelligent Design » Photosynthesis, Protozoans,Plants and Bacterias » Assembling and maintaining the Photosystem II complex in chloroplasts and cyanobacteria