The genetic code is nearly optimal for allowing additional information within protein-coding sequences Tue Dec 17, 2013 4:23 am


DNA sequences that code for proteins need to convey, in addition to the protein-coding information, several different signals at the same time. These “parallel codes” include binding sequences for regulatory and structural proteins, signals for splicing, and RNA secondary structure. Here, we show that the universal genetic code can efficiently carry arbitrary parallel codes much better than the vast majority of other possible genetic codes. This property is related to the identity of the stop codons. We find that the ability to support parallel codes is strongly tied to another useful property of the genetic code—minimization of the effects of frame-shift translation errors. Whereas many of the known regulatory codes reside in nontranslated regions of the genome, the present findings suggest that protein-coding regions can readily carry abundant additional information.

But if the code cannot be changed, then how did it evolve in the first place? The very universality which Coyne celebrates undercuts the theory Coyne is so sure is a fact.

Imagine the gradual evolutionary steps leading to the DNA code. In the penultimate step, the code was slightly different. And in the step before that, it was a slightly more different code. And so forth. The code must have been evolving—it must have been changing. And yet suddenly the code could no longer evolve. It makes no sense and, beyond hand-waving, proponents of evolution have no explanation for it.

Furthermore the code is also unique and special. It has several profound properties that are very helpful. For instance its arrangement is such that the effects of copying errors are minimized. Not only did the code just happen to evolve in early evolution, evolution just happened to find a one-in-a-million code.

The genetic code is one in a million 3

if we employ weightings to allow for biases in translation, then only 1 in every million random alternative codes generated is more efficient than the natural code. We thus conclude not only that the natural genetic code is extremely efficient at minimizing the effects of errors, but also that its structure reflects biases in these errors, as might be expected were the code the product of selection. 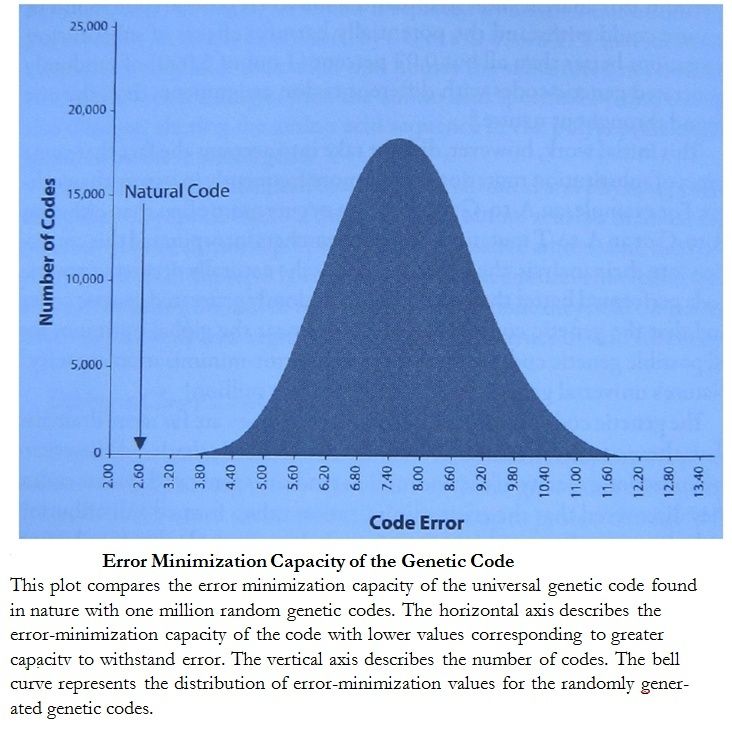 Even though some researchers think natural selection shaped the genetic  code, other scientific work questions the likelihood that the genetic code could evolve. In 1968, Nobel laureate Francis Crick argued that the genetic code could not undergo significant evolution. His rationale is easy to understand. Any change in codon assignments would lead to changes in amino acids in every polypeptide made by the cell. This wholesale change in polypeptide sequences would result in a large number of defective proteins. Nearly any conceivable change to the genetic code would be lethal to the cell.  The scientists who suggest that natural selection shaped the genetic code are fully aware of Crick's work. Still they rely on evolution to explain the  code's optimal design because of the existence of nonuniversal genetic codes.

Is a Timely Rescue Possible?
Even if the genetic code could change over time to yield a set of rules that  allowed for the best possible error-minimization capacity, is there enough time for this process to occur? Biophysicist Hubert Yockey addressed this question. He determined that natural selection would have to explore 1.40 x 10^70 different genetic codes to discover the universal genetic code found in nature. The maximum time available for it to originate was estimated at 6.3 x 10^15 seconds. Natural selection would have to evaluate roughly 10^55 codes per second to find the one that's universal. Put simply, natural selection lacks the time necessary to find the universal genetic code.  Other work places the genetic code's origin coincidental with life's start. Operating within the evolutionary paradigm, a team headed by renowned origin-of-life researcher Manfred Eigen estimated the age of the genetic code at 3.8 ± 0.6 billion years. Current geochemical evidence places life's first appearance on Earth at 3.86 billion years ago. This timing means that the genetic code's origin coincides with life's start on Earth. It appears as  if the genetic code came out of nowhere, without any time to search out the best option.

In the face of these types of problems, some scientists suggest that the genetic code found in nature emerged from a simpler code that employed codons consisting of one or two nucleotides. Over time, these simpler genetic codes expanded to eventually yield the universal genetic code based on coding triplets. The number of possible genetic codes based on one or two nucleotide codons is far fewer than for codes based on coding triplets. This scenario makes code evolution much more likely from a naturalistic standpoint. One complicating factor for these proposals arises, however, from the fact that simpler genetic codes cannot specify twenty different amino acids. Rather, they are limited to sixteen at most. Such a scenario would mean that the first lifeforms had to make use of proteins that consisted of no more than sixteen different amino acids. Interestingly, some proteins found in nature, such as ferredoxins, are produced with only thirteen amino acids. On the surface, this observation seems to square with the idea that the genetic code found in nature arose from a simpler code. Yet, proteins like the ferredoxins are atypical. Most proteins require all twenty amino acids. This requirement, coupled with recent recognition that life in its most minimal form needs several hundred proteins , makes these types of models for code evolution speculative at best. The optimal nature of the genetic code and the difficulty accounting for the code's origin from an evolutionary perspective work together to support the conclusion that an Intelligent Designer programmed the genetic code, and hence, life.