Defending the Christian Worldview, Creationism, and Intelligent Design » Philosophy and God » Natural selection : The BIG WHITE ELEPHANT in the room of naturalism ( that nobody is talking about):

Natural selection : The BIG WHITE ELEPHANT in the room of naturalism ( that nobody is talking about):

A selection process is needed to select:

1. The right expansion rate of the Big bang,
2. The fundamental forces of the universe and the right coupling constants,
3. The right-sized quarks and composition to have the right protons, neutrons, and electrons, to have stable atoms,
4. The right fine-tune parameters that go into the hundreds to have a life-permitting universe, in special the earth, the electromagnetic spectrum, water,
5. The right nucleobase isometries to have Watson-Crick base-pairing, and stable DNA
6. All the functional parts for the first living cell, the right genome, proteome, metabolome, and interactome, before you get to the first free-living, self-replicating cell, where SUPPOSEDLY evolution and natural selection could theoretically kick in, and start doing its business.

The problem is: Mindless nature has no goals, no purpose, no will, no foresight, no intention to bring forward life. The lack of an alternative viable possible plausible, probable alternative selection mechanism to an intelligent mind with intentions and will mean checkmate for naturalism.
Objection: Thats an argument from ignorance.

Reply:  Eliminative inductions argue for the truth of a proposition by arguing that competitors to that proposition are false. Provided the proposition, together with its competitors, form a mutually exclusive and exhaustive class, eliminating all the competitors entails that the proposition is true. Since either there is a God, or not, either one or the other is true. As Sherlock Holmes's famous dictum says: when you have eliminated the impossible, whatever remains, however not fully comprehensible, but logically possible, must be the truth. Eliminative inductions, in fact, become deductions.
Objection: Intelligent design or chance is a false dichotomy.

Reply: Right. The correct dichotomy would be Intelligent design or not intelligent design. We cannot invoke a third alternative, physical necessity. There was no need for nothing to become something, nor for the variegated physical finely adjusted parameters to be what they are. in fact:

Paul Davies said in God and Design: The Teleological Argument and Modern Science page 148–49, 2003
“There is not a shred of evidence that the Universe is logically necessary. Indeed, as a theoretical physicist I find it rather easy to imagine alternative universes that are logically consistent, and therefore equal contenders of reality”
https://3lib.net/book/733035/b853a0

Chance, on the other hand, is not an alternative causal agent to intelligent design, but a measure of indeterminism, for a casual and unpredictable movement. The alternative factor responsible for all physical to God is NOTHING. In short, it's either God or no God. How can nothing cause something into being? Of course, it can't. Atheists, by experience, will attempt to dispute this, but a philosophical nothingness is the absence of anything, and can't, therefore, do something.

Strong atheists are left with a BIG WHITE ELEPHANT in the room. What I have outlined above, is obvious, and everyone knows. Nothing has no causal power and does not select things for a purposeful outcome. This is an uncomfortable, embarrassing truth, that lets every holder of a naturalistic worldview, without an answer. As a dictum says: " The emperor has no clothes". 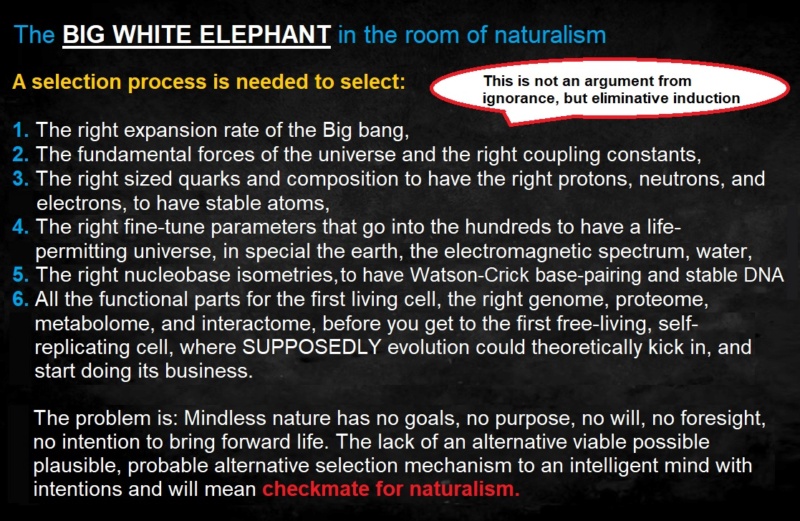 Defending the Christian Worldview, Creationism, and Intelligent Design » Philosophy and God » Natural selection : The BIG WHITE ELEPHANT in the room of naturalism ( that nobody is talking about):