Evidence for early life in Earth’s oldest hydrothermal vent precipitates 5
Here we describe putative fossilized microorganisms that are at least 3,770 million and possibly 4,290 million years old in ferruginous sedimentary rocks, interpreted as seafloor-hydrothermal vent-related precipitates, from the Nuvvuagittuq belt in Canada. There are no confirmed microfossils older than 3,500 million years (Myr) on Earth, probably because of the highly metamorphosed nature of the oldest sedimentary rocks1 . Therefore, studies have focused almost exclusively on chemical traces and primarily on the isotopic composition of carbonaceous material,which has led to controversies regarding the origin of isotopically light reduced carbon2 . Schists from the approximately 3,700-Myr-old Isua supracrustal belt in southwest Greenland contain up to 8.8 wt% graphitic carbon that is depleted in 13C, and this depletion has been attributed to biological activity.  Modern hydrothermal Si-Fe vent deposits host communities of microorganisms, some of which are Feoxidizing bacteria that form distinctive tubes and filaments

Potentially biogenic carbon preserved in a 4.1 billion-year-old zircon 6
the microfossil record only extends to ∼3.5 billion years (Ga), the chemofossil record arguably to ∼3.8 Ga, and the rock record to 4.0 Ga. Detrital zircons from Jack Hills, Western Australia range in age up to nearly 4.4 Ga. From a population of over 10,000 Jack Hills zircons, we identified one >3.8-Ga zircon that contains primary graphite inclusions.

As for life on land, in 2019 scientists reported the discovery of a fossilized fungus, named Ourasphaira giraldae, in the Canadian Arctic, that may have grown on land a billion years ago, well before plants were living on land

Early fungi from the Proterozoic era in Arctic Canada 7
Fungi are crucial components of modern ecosystems. They may have had an important role in the colonization of land by eukaryotes, and in the appearance and success of land plants and metazoans1–3 . Nevertheless, fossils that can unambiguously be identified as fungi are absent from the fossil record until the middle of the Palaeozoic era4,5. Here we show, using morphological, ultrastructural and spectroscopic analyses, that multicellular organic-walled microfossils preserved in shale of the Grassy Bay Formation (Shaler Supergroup, Arctic Canada), which dates to approximately 1,010–890  million years ago, have a fungal affinity.

Integrated genomic and fossil evidence illuminates life’s early evolution and eukaryote origin 8
Establishing a unified timescale for the early evolution of Earth and life is challenging and mired in controversy because of the paucity of fossil evidence, the difficulty of interpreting it and dispute over the deepest branching relationships in the tree of life.  We find the last universal common ancestor of cellular life to have predated the end of late heavy bombardment (>3.9 billion years ago (Ga)). The Great Oxidation Event significantly predates the origin of modern Cyanobacteria, indicating that oxygenic photosynthesis evolved within the cyanobacterial stem lineage. Modern eukaryotes do not constitute a primary lineage of life and emerged late in Earth’s history (<1.84 Ga), falsifying the hypothesis that the Great Oxidation Event facilitated their radiation. The symbiotic origin of mitochondria at 2.053–1.21 Ga reflects a late origin of the total-group Alphaproteobacteria to which the free living ancestor of mitochondria belonged.

My comment: This is interesting. If Alphaproteobacteria, to which Pelagibacter Ubique belong, came about 2 billion years ago, then this is much later than Cyanobacteria, which are considerably more complex. 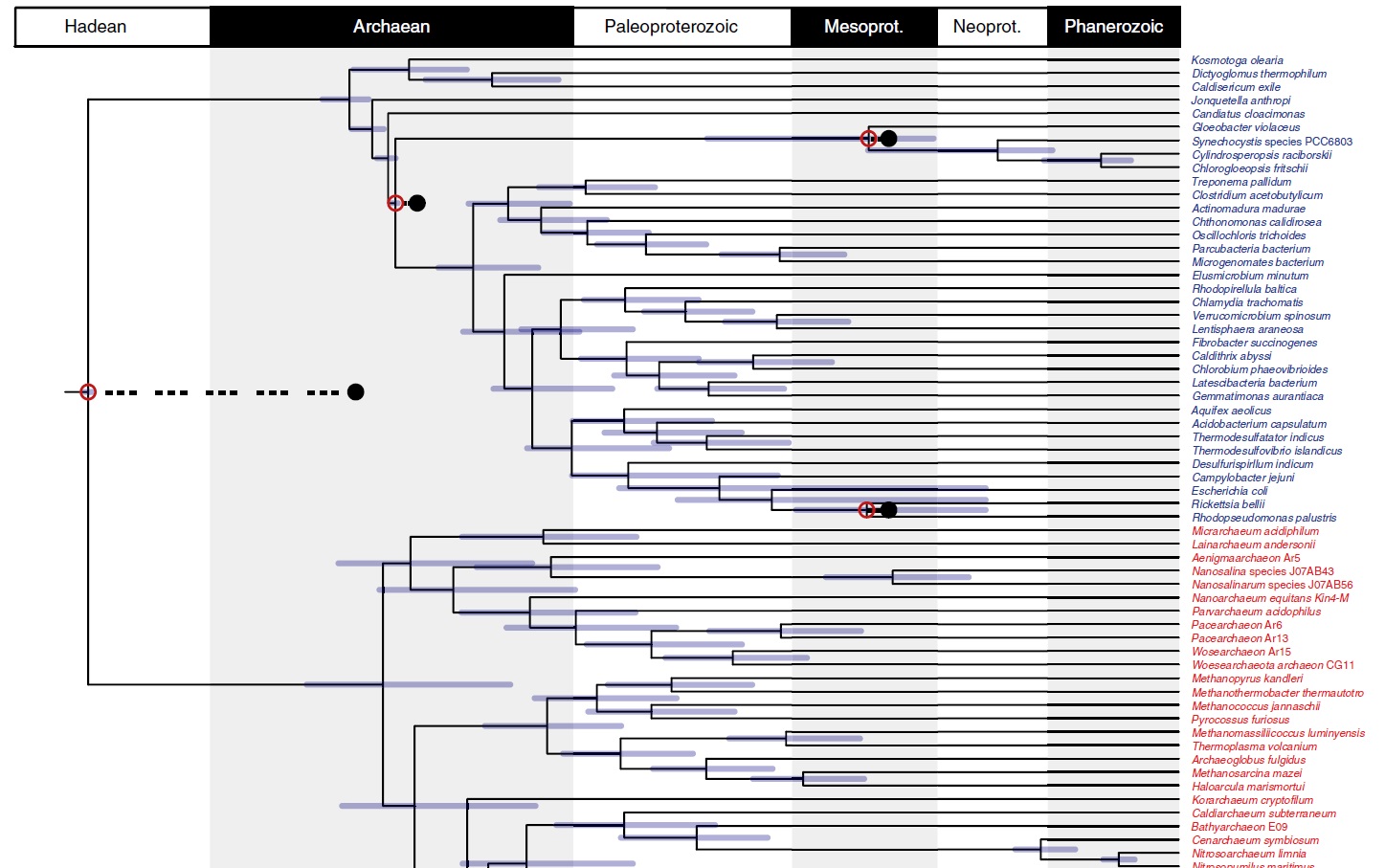 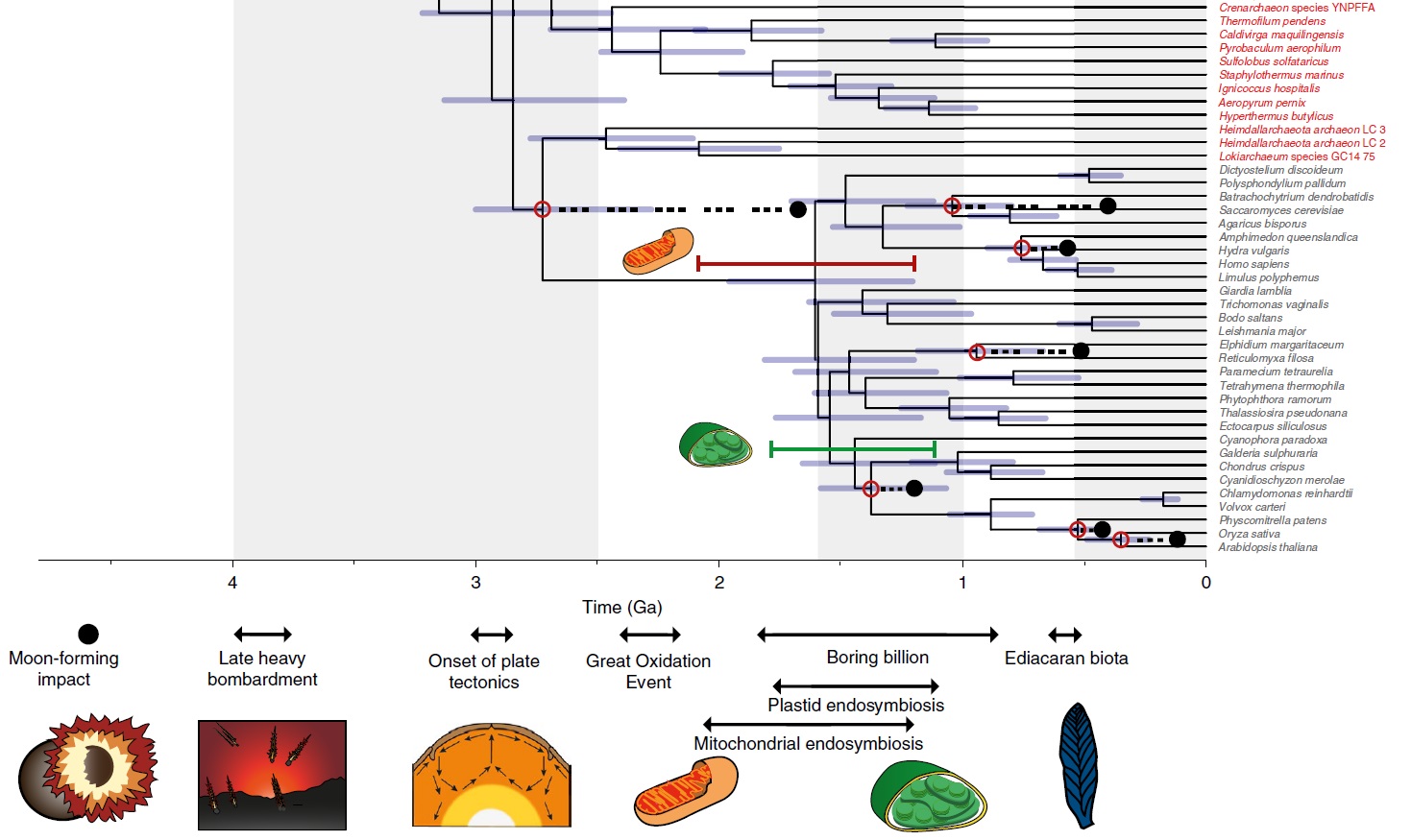 A tree combining uncertainties from approaches using uncorrelated and autocorrelated clock models and different calibration density distributions.
Tip labels are shown for Eukaryota (grey), Archaeabacteria (red) and Eubacteria (blue). The purple bars denote the credible intervals for each node. Red dots highlight calibrated nodes, and corresponding black dots highlight the age of the minimum bound of its corresponding calibration. The phylogenetic relationships of the mitochondrion within Alphaproteobacteria are still debated56,74–76, and it is unclear whether the free-living ancestor of the mitochondrion was a crown or stem representative of this group. The red bar above the crown eukaryote node denotes the time period during which the mitochondrial endosymbiosis may have occurred. The green bar denotes the time during which the plastid endosymbiosis may have occurred. Important events in Earth and life history are indicated along the base of the figure. Mesoprot., Mezoproterozoic; Neoprot., Neoproterozoic.

Recent environmental genomic surveys indicate that metabolisms using the Wood–Ljungdahl pathway to fix carbon minimally evolved in stem archaebacteria and might have been a characteristic of LUCA. The Great Oxidation Event (GOE; ~2.4Ga) was perhaps the most significant episode in the Proterozoic, fundamentally changing the chemistry of Earth’s atmosphere and oceans, and probably altering temperature. It has been causally associated with the evolution of Cyanobacteria, as a consequence of their oxygen release.   Our timescale indicates that crown Cyanobacteria and crown Eukaryota significantly postdate the GOE. Crown Cyanobacteria diverged 1,947–1,023Ma, precluding the possibility that oxygenic photosynthesis emerged in the cyanobacterial crown ancestor. However, the Cyanobacteria separated from other eubacterial lineages  including the non-photosynthetic sister group of the Cyanobacteria Melanibacteria in the Archaean, before the GOE, consistent with the view that oxygenic photosynthesis evolved along the cyanobacterial stem49, and compatible with a causal role of the total-group Cyanobacteria in the GOE. Crown Eukaryota diverged considerably after both the Eukaryota–Asgardarchaeota split and the GOE, in the middle Proterozoic (1,842–1,210Ma). Our study strongly rejects the idea that eukaryotes might be as old as, or older than, prokaryotes, and agrees with a number of other studies that date the last eukaryote common ancestor (LECA) to the Proterozoic (~1,866–1,679Ma) Within eukaryotes, the main extant clades emerged by the middle Proterozoic, including Opisthokonta (~1,707–1,125Ma), Archaeplastida (~1,667–1,118Ma) and SAR (stramenopiles (heterokonts), alveolates and Rhizaria; ~1,645–1,115Ma). The symbiotic origin of the plastid occurred among stem archaeplastids (~1,774–1,118Ma), and our 95% credibility interval for the origin of the plastid overlap with the results of other recent studies

The search for the earliest fossil evidence of life on Earth has created more heat than light. Although the fossil record remains integral to establishing a timescale for the Tree of Life, it is not sufficient in and of itself. Our integrative molecular timescale encompasses the uncertainty associated with fossil, geological and molecular evidence, as well its modelling, allowing it to serve as a solid foundation for testing evolutionary hypotheses in deep time for clades that do not have a credible fossil record.

Bacteria
The crown clades of the primary divisions of life, Archaebacteria and Eubacteria emerged over one billion years after LUCA in the Mesoarchaean–Neoarchaean. The earliest conclusive evidence of cellular life (Strelley Pool Formation, Australia falls within the 95% credibility intervals for the ages of the last common ancestors of both clades, indicating that these fossils might belong to one of the two living prokaryotic lineages.

Kosmotoga olearia
The complete K. olearia genome consists of 2,302,126 bp in a single circular chromosome, making it one of the largest sequenced Thermotogales genomes. 9