Aquifex aeolicus is a rod-shaped bacterium with a length of 2 to 6 micrometers and a diameter of around half a micrometer. It is one of a handful of species in the Aquificae phylum, an unusual group of thermophilic bacteria that are thought to be some of the oldest species of bacteria.

The bacterium shown in Fig 4 (right), Aquifex, is genetically positioned as the oldest living fossil on the earth today. 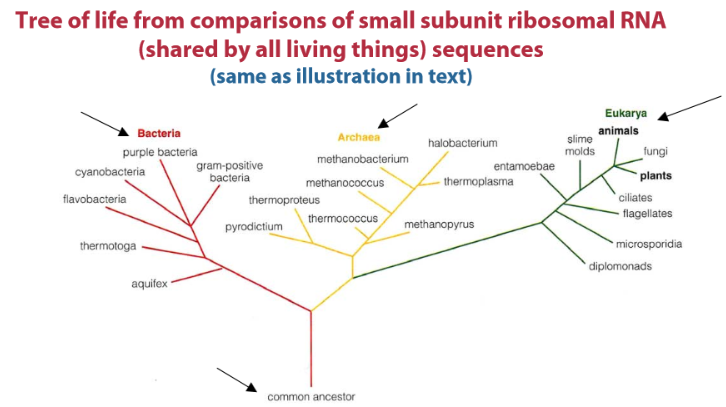 It is extremely unlikely that the earliest cell was such a heterotroph “feeding” on organic compounds such as acids and sugars. Many strictly anaerobic bacteria today break down glucose through the Entner-Doudoroff pathway. This pathway comprises more than six enzymes acting in sequence and is therefore rather advanced for the rudimentary first cell.

If the specific qualities of the ancestor are to reflect the geothermal environment it occupied it should be a thermophilic autotroph, that is, a heat-tolerant cell subsisting on the simplest compounds. It happens that the Archaebacteria of today inhabit environments of extreme heat or salinity or acidity. They can utilise (fix) CO2, although not by the Calvin cycle, as in most photosynthetic organisms. Indeed, current belief is that the closest to a prototype of the earliest cell are those Archaebacteria that are completely anaerobic, with inorganic electron acceptors, and which use H2 and CO2 as sole reductant and carbon source, respectively.124 These cells called chemolithotrophs are (were) able to extract energy and synthesise their cellular constituents from simple molecules such as SO4 2– , S2, H2 and CO2. For most anaerobic Archaebacteria, CO2 can be used as the sole carbon source for growth, and acetyl-CoA is the central biosynthetic intermediate or “building block” for other molecules. The formation of acetyl-CoA requires two molecules of CO2 , a nickel enzyme complex and other cofactors. Furthermore, pyruvate obtained from the breakdown of glucose is converted to acetyl-CoA by a thiamine-pyrophosphate (TPP) enzyme called pyruvate oxidoreductase.125

The recruitment of coenzymes such as TPP so early in evolution is puzzling. Recently, Keefe and his colleagues attempted the successful synthesis of pantetheine, a precursor to coenzyme A, presuming the abundance of the precursor molecules on the primitive Earth. Heating pantetheine with ATP or ADP failed to produce the dephosphocoenzyme A.126,127 All things considered, a chemolithotroph, whether ancient or modern, is anything but simple for the kinds of enzymes and metabolic pathways it possesses.