Defending the Christian Worlview, Creationism, and Intelligent Design » Origin of life » Origin of genetic information, and nucleic acids and proteins with specific and functional sequences

Origin of genetic information, and nucleic acids and proteins with specific and functional sequences

Origin of genetic information, and nucleic acids and proteins with specific and functional sequences Sun Jan 24, 2021 11:52 am

Bernd-Olaf Küppers Information and the Origin of Life
The problem of the origin of biological information is not solved satisfactorily by the chance hypothesis. Objectivity itself forces us "to recognize the teleonomic character of living organisms, to admit that in their structure and performance they decide on and pursue a purpose. Here therefore, at least in appearance, lies a profound epistemological contradiction. In fact the central problem of biology lies with this very contradiction, which, if it is only apparent, must be resolved, or else proved to be radically insoluble, if that should turn out indeed to be the case." Eugene Wigner, attributes the existence of biological information to the effect of life-specific natural laws, which bring inert matter to life, but which cannot be reduced to the laws of physics and chemistry. 6

Anthony D. Keefe & Jack W. Szostak Functional proteins from a random-sequence library
In conclusion, we suggest that functional proteins are sufficiently common in protein sequence space (roughly 1 in 10^11) that they may be discovered by entirely stochastic means, such as presumably operated when proteins were first used by living organisms. However, this frequency is still low enough to emphasize the magnitude of the problem faced by those attempting de novo protein design 5
My comment: The average size of proteins in prokaryotes is about 300 amino acids. Finding functional sequence in polypeptide chains of such size is far more difficult. And this does not take into consideration, that in order to have a minimal free-living cell, like Pelagibacter Ubique, about 1300 proteins are required.

Open questions in origin of life: experimental studies on the origin of nucleic acids and proteins with specific and functional sequences by a chemical synthetic biology approach 2014 Feb 23 1
The formation of macromolecules on prebiotic Earth faces practical and conceptual difficulties. From the chemical viewpoint, macromolecules are formed by chemical pathways leading to the condensation of building blocks (amino acids, or nucleotides) in long-chain copolymers (proteins and nucleic acids, respectively). The second difficulty deals with a conceptual problem, namely with the emergence of specific sequences among a vast array of possible ones, the huge “sequence space”, leading to the question “why these macromolecules, and not the others?”

Being still far from solved, the main aspects of these “open questions” are discussed here, by commenting on recent results obtained in our groups and by providing a unifying view on the problem and possible solutions. One of the main open questions in the field of the origin of life is the biogenesis of proteins and nucleic acids as ordered sequences of monomeric residues, possibly in many identical copies. The first important consideration is that functional proteins and nucleic acids are – chemically speaking – copolymers, i.e., polymer formed by several different monomeric units, ordered in a very specific way.

Attempts to obtain copolymers, for instance by a random polymerization of monomer mixtures, yield a difficult to characterize mixture of all different products. To the best of our knowledge, there is no clear approach to the question of the prebiotic synthesis of macromolecules with an ordered sequence of residues. Note that this problem has been beautifully solved by the invention of genetic code and the translation apparatus; however this does not solve the original question about how primitive functional molecules have arisen under prebiotic conditions.

The copolymeric nature of proteins and nucleic acid challenges our understanding of origin of life also from a theoretical viewpoint. The number of all possible combinations of the building blocks (20 amino acids, 4 nucleotides) forming copolymers of even moderate length is ‘astronomically’ high, and the total number of possible combinations it is often referred as the “sequence space”. Simple numerical considerations suggest that the exhaustive exploration of the sequence spaces, both for proteins and nucleic acid, was physically not possible in the early Universe, both for lack of time and limited chemical material. Then, the question becomes: even taking for granted a prebiotic chemical route to copolymerization (i.e., a condensation reaction occurring in primitive conditions that does not produce only simple homopolymers), how could early, functional biological macromolecules have been selected?

Experimental results generally focus on exploring the conditions for achieving the desired condensation reactions and demonstrating, as proof-of-concept, that oligo-and polymerization can occur from the chemical viewpoint.

My comment: The condensation problem:
There is a third difficulty in prevital synthesis of biopolymers, and this is the most generally recognized: all the major biopolymers are metastable in aqueous solution in relation to their (deactivated) monomers. Left to itself in water, a polypeptide will hydrolyze to its constituent amino acids. 2

Perhaps there is some other way of making peptides with more or less specified amino acid sequences; and perhaps this way does not need detailed control. Perhaps it could then have operated before there was life
on Earth, before that engineer, natural selection, appeared on the scene. But it is difficult to see how this could have been so. I think we would know by now if there was some much easier way. It is similarly difficult to imagine anything like polysaccharide being accumulated in primordial waters. As we saw, the monosaccharides could only have been made easily from formaldehyde, as far as anyone knows, and there is doubt if there could have been sufficient concentrations of that. In any case, as we saw, the product of the formose reaction is a very complex mixture that easily leads to higher polymers and to caramel.

Although there is number of interesting approaches for prebiotic condensation of both peptides and nucleic acids, they all have some shortcomings; mainly in the formation of specific sequences, and in chemoselectivity and regioselectivity.

As already mentioned, there are no methods described in the literature to efficiently generate long polypeptides, and we also lack a theory for explaining the origin of some macromolecular sequences instead of others.

Primordial emergence of a nucleic acid-binding protein via phase separation and statistical ornithine-to-arginine conversion June 19, 2020 3
The first proteins emerged some 4 billion y ago, and understanding how they came about is a daunting challenge. Further complicating matters, the rules of protein structure and function derived from modern proteins may be irrelevant to their earliest ancestors. De novo emergence demands a transition from disordered polypeptides into structured proteins with well-defined functions. However, can polypeptides confer functions of evolutionary relevance, and how might such polypeptides evolve into modern proteins? The earliest proteins present an even greater challenge, as they were likely based on abiotic, spontaneously synthesized amino acids. Proteins with defined biochemical function are thought to be exceedingly rare in sequence space, with some probability estimates as low as 10^11 for nucleotide binding.

Duplication events and expansion of the amino acid alphabet would then enable a smooth transition to more complex protein forms, with both structure and function becoming increasingly defined over time.
My comment:

On the nature and origin of biological information: The curious case of RNA d 12 September 2019
We suggest biological information can be seen as being both semantic and open-ended in terms of the forms that can take shape, while at the same time arising as the result of certain constraints and selection pressures that limit an otherwise overwhelming sea of improbability brought about in the Shannon sense of information. 7
My comment:  The authors suggest selection out of the sheer lack of alternatives, without providing any evidential support whatsoever that such selective pressures were present on the early earth.

ON THE ORIGIN OF BIOLOGICAL INFORMATION  1994
A simultaneous evolution of a primitive translation system would be required to make use of the information contained in the precursor (m)RNA. Evidently, also in prebiotic evolution (as in biological evolution) a primacy of any polymer or monomer does not exist. The whole is more than the sum of its parts. The evidence calls for coevolution. 9
My comment: Its not that there is evidence for coevolution, but evidence that the system had to emerge together and functioning right from the beginning. And that indicates intelligent design. 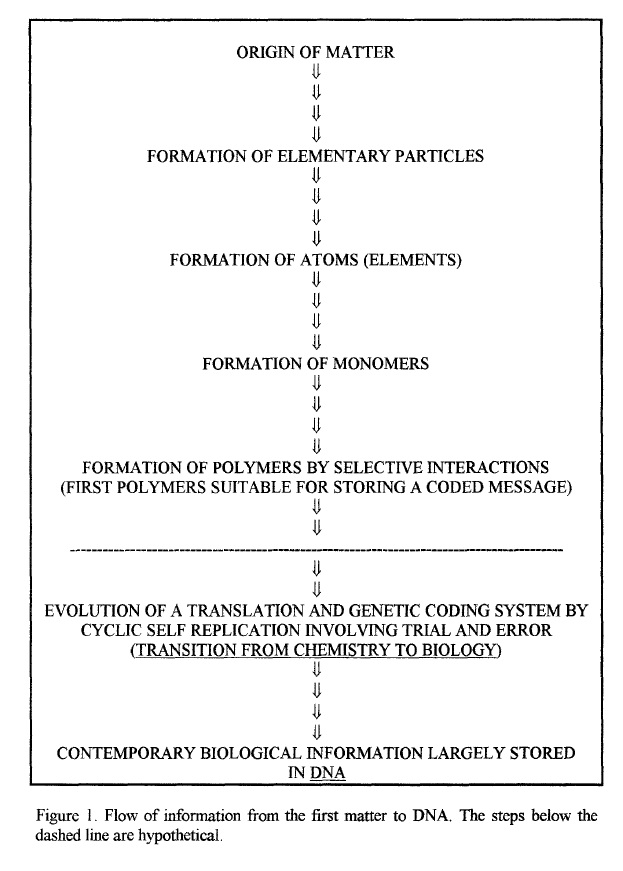 Defending the Christian Worlview, Creationism, and Intelligent Design » Origin of life » Origin of genetic information, and nucleic acids and proteins with specific and functional sequences