Defending the Christian Worlview, Creationism, and Intelligent Design » Molecular biology of the cell » The boa constriction of the protein world: By evolution, or design?

The boa constriction of the protein world: By evolution, or design?

The mechanistic variety of inventions seen in the molecular world seem to be endless, countless number of ingenious solutions.

A science paper reports: Dynamin is  a self-sufficient fission machine. 4 Proteins controlling topological membrane remodeling in cells have been evolutionarily designed (sic) to make lipids follow a nonleaky pathway stipulated by the reaction of the lipid bilayer to asymmetric curvature stress.
My comment: That is the first time, that i see the claim that evolution has the capabilities to be a designer. Amazing!!

Dynamin functions similarly like a boa, which constricts its prey and suffocates it.
It functions at the heart of endocytic vesicle fission in plant and animal cells. Dynamin possesses the remarkable property of assembling into contractile helical polymers that wrap around the neck of a budding vesicle. The field has focused on how constriction of this helix contributes to severing the membrane to release the vesicle.

Other proteins perform as well the topologically opposite reaction—membrane fusion— which is mediated by many dynamin‐like proteins. Most of the dynamin‐like proteins catalyze either fission or fusion. So they can be BI-functional. Also in plants, dynamin‐related proteins have been implicated in cell division, organelle division, and endocytosis.  In prokaryotes, functions related to the membrane stress response  or the shedding of vesicles to the environment also rely on dynamin‐related proteins.

Evolution of dynamin: modular design of a membrane remodeling machine
A fundamental feature of cells is the existence of a lipid bilayer that confines the cytoplasm. Various transport and signaling systems ensure communication and exchange with the environment. In eukaryotic cells, uptake of
extracellular matter is mediated by endocytosis. Clathrin-mediated endocytosis (CME) is one mechanism to release plasma membrane vesicles with cargo into the cytosol. CME is initiated by binding of adapter proteins to membrane domains rich in phosphatidylinositol 4,5-bisphosphate (PIP2). Subsequently, clathrin assembles at these sites and leads to membrane bulging (clathrin coated pits, CCPs). Release of vesicles (CCVs) requires assemblies of dynamin around the neck of CCPs. Dynamins are large GTPases, which induce membrane curvature at the nascent CCPs, thereby triggering vesicle release. Classical dynamins and dynamin-like proteins (DLPs)
belong to a family of proteins with similar domain structure. 5 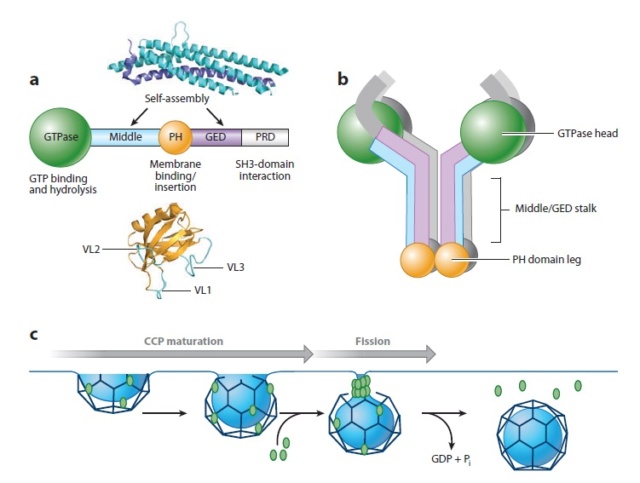 Domain structure and function of dynamin.
(a) Dynamin consists of five functionally distinct domains.High-resolution structures of the pleckstrin homology (PH) domain from human dynamin  and the middle domain and GTPase effector domain (GED) of human MxA , which together form an α-helical stalk, are shown. PRD, proline-arginine domain; VL, variable loop.
(b) Dynamin exists as a tetramer in solution. The GTPase domain is separated from the lipid-binding PH domain by the α-helical stalk. Domains are color coded as in panel a.
(c) Dynamin’s role in clathrin-mediated endocytosis. Dynamin is recruited to nascent clathrin-coated pits (CCPs), where it plays a role in monitoring and regulating CCP maturation. A transient burst of dynamin, presumably reflecting its assembly into collar-like structures at the necks of deeply invaginated CCPs, occurs just prior to membrane fission and release of a clathrin-coated vesicle. Pi, inorganic phosphate. 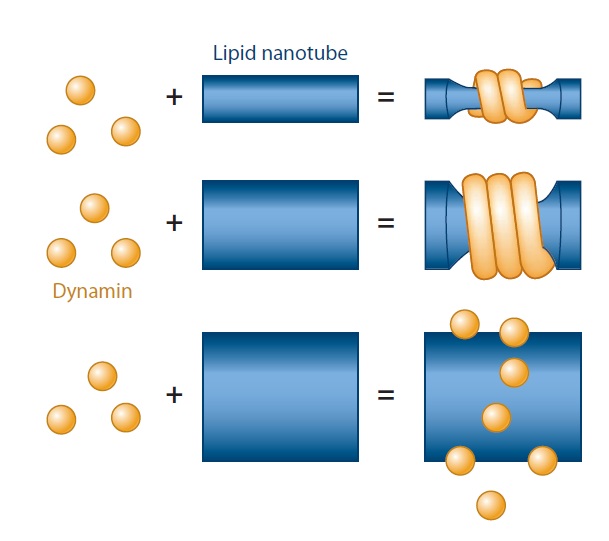 (a) Dynamin’s ability to generate curvature is dependent on membrane mechanics and geometry. Dynamin fails to polymerize on and squeeze wide membrane tubes; even when the polymerization takes place, the final diameter of the constricted tube depends on its initial radius, which is determined by membrane rigidity. 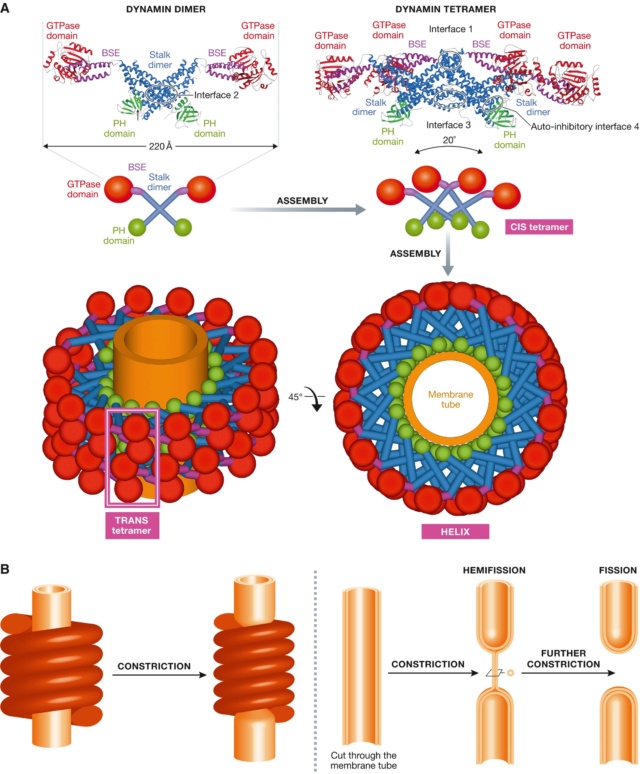 (A) Crystal structure of the dimer and of the tetramer, showing the interfaces required for assembly.
A schematic representation shows how the tetramers further assemble into a helix, showing the basic CIS‐tetramer and TRANS‐tetramers. (B) The original constriction model for dynamin‐mediated membrane fission, as suggested by the helical structure of dynamin. 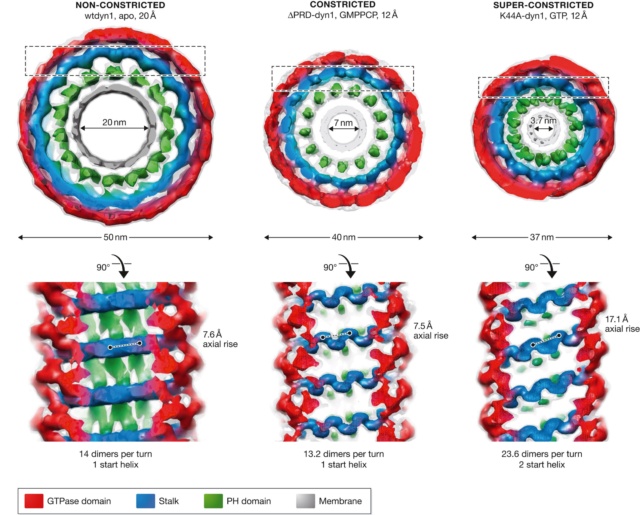 The three states of the dynamin helix observed by cryo‐EM, with dimensions and angles. 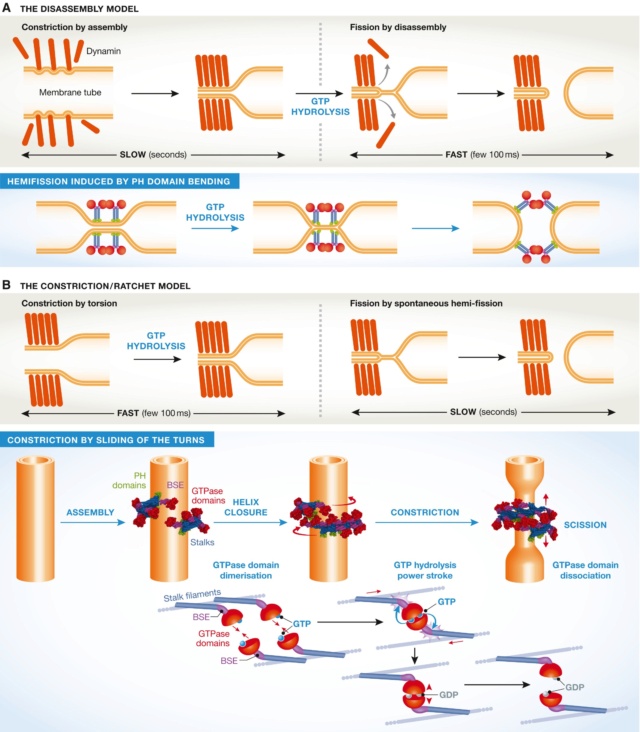 The two models of dynamin‐mediated membrane fission
(A) The two‐stage model, where constriction is mediated by assembly, and fission by disassembly. (B) The constriction/ratchet model in which constriction is realized by active sliding of the helical turns and fission by spontaneous fusion of the membrane. The one ring state presented here is proposed to be the most common in vivo 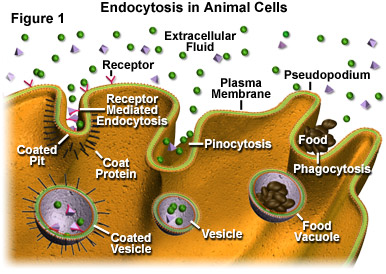 Admin
Posts : 6079
Join date : 2009-08-09
Age : 54
Location : Aracaju brazil
Endosomes are membrane-bound vesicles, formed via a complex family of processes collectively known as endocytosis, and found in the cytoplasm of virtually every animal cell. 1
Membrane vesicles carry cargo between cellular organelles, into and out of the cell. In the final step of endocytic vesicle biogenesis, the sides of a tubular membrane are brought into close apposition, leading to an amazing choreography of events, including the recruitment, assembly, and activation of numerous endocytic proteins that ultimately catalyze membrane fission. This process has fascinated cell biologists, biochemists, and physicists alike, due to its central importance to cell function. 2

Endocytosis is inextricably linked with almost all aspects of cellular signaling. 6 It is  inextricably linked with almost all aspects of cellular signaling. Endocytosis is the master organizer of cellular signaling, providing the cell with understandable messages that have been resolved in space and time. In essence, endocytosis provides the communications and supply routes (the logistics) of the cell. Although this may seem revolutionary, it is still likely to be only a small part of the entire story. A wealth of new evidence is uncovering the surprisingly pervasive nature of endocytosis in essentially all aspects of cellular regulation. Many newly discovered functions of endocytic proteins are not immediately interpretable within the classical view of endocytosis. A possible framework, to rationalize all this new knowledge, requires us to “upgrade” our vision of endocytosis. Endocytosis constitutes one of the major enabling conditions that permits the development of a higher level of organization, leading to the actuation of the eukaryotic cell plan. Endocytosis is the process by which cells absorb molecules … that cannot pass through the plasma membrane.” Endocytosis serves to bring nutrients and/or other types of molecules into the cell and, at the same time, to regulate the composition of the plasma membrane (PM). Endocytosis is involved in a vast program, deeply ingrained in the cellular master plan and inextricably intertwined with signaling, which constitutes the major communications infrastructure of the cell.  As such, it governs almost all aspects of the relationships of the cell with the extracellular environment and of intracellular communication. “Endocytosis is the logistics of the cell,” where logistics involves the integration of information, transportation, inventory, warehousing, material handling and packaging, and security, or in brief having the right thing, in the right place, at the right time.

Defending the Christian Worlview, Creationism, and Intelligent Design » Molecular biology of the cell » The boa constriction of the protein world: By evolution, or design?