Nearly all natural proteins are structurally and functionally complex. The relationship between the structural flexibility and dynamics of biomolecules and function is one of the key areas of research in modern biological science.

Proteins need to be “Just Right” right from the beginning of the origin of life. If biologically important molecules are too stable, metabolism and reproduction will be impossible—species will be inert and necessary chemical reactions won’t occur 3

Flexibility in the structure of a protein plays a key role in its binding to other proteins. 4

How ancestral proteins attained functionality, even though they were most likely markedly smaller than their contemporary descendants, remains a major, unresolved question in the origin of life. 2

Intrinsically disordered proteins (IDPs) have no fixed 3-D conformation in at least part of the protein. Surprisingly, this is not a harmful aberration. Numerous proteins—perhaps 40% of all proteins—may have at least one region that is intrinsically disordered. But if structure determines function, then why would so many proteins naturally have portions with no fixed shape? Their lack of fixed structure makes possible a different kind of function: flexibility. Proteins are not rigid structures; instead, they are flexible.

And IDPs take this flexibility to the extreme. Some have no fixed shape anywhere throughout their structure and are called fully disordered. Others are partly folded into a fixed shape but also have regions without a fixed shape. Such proteins are described as partly disordered.

A protein with a fixed 3-D conformation is limited in the molecules it can interact with. By contrast, an IDP could bind to a wider variety of partners, adopting a different structure complementary to each partner. Indeed, intrinsically disordered regions are found in proteins that are known to interact with multiple molecular partners, with functions that include signaling and regulation.
During the 21st century, IDPs have come to be recognized as a class of proteins in their own right. Analysis of the sequence of proteins known to be disordered reveals that they are unusually rich in hydrophilic amino acids, such as cysteine.

For some proteins, function results from proper folding into a regular 3-D structure. But for other proteins, function may arise from exactly the opposite—the inability of a protein, or a part thereof, to form a precise structure. This may be what allows for flexible interactions with a much wider variety of other biomolecules.

Protein structures are valuable tools to understand protein function. Nonetheless, proteins are often considered as rigid macromolecules while their structures exhibit specific flexibility, which is essential to complete their functions. 1

Flexibility also allows interactions with different partners, with ligands by induced-fit interaction, with other proteins, or nucleic acids to form complex structures.  The function of proteins and their interaction mechanism need some flexible properties that are considerably more complex than this simplistic binary view. Dynamics of proteins turn out to cover a large spectrum of conformational changes (combined by mobility of rigid fragment and deformability of backbone), by the existence of intrinsic disorder region, by allosteric effect… Some of these flexible mechanisms need structural reorganization at a local level. 5

How did the first necessary proteome to generate life be made without having the foreknowledge of a designer knowing what kind of flexibility was required by each protein to bear the necessary functions? 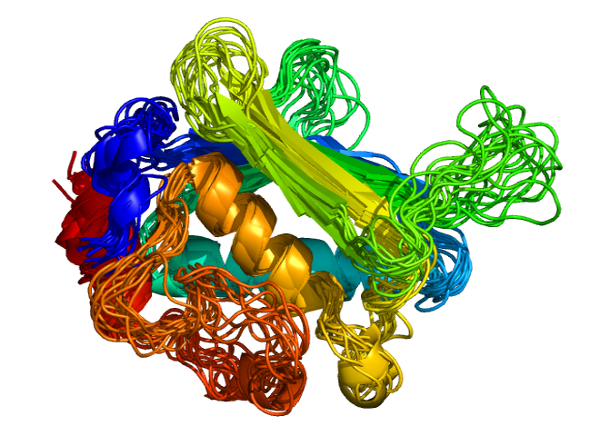