Defending the Christian Worldview, Creationism, and Intelligent Design » Philosophy and God » Theism versus atheism: What is it really about?

Theism versus atheism: What is it really about?

The theism versus atheism debate is not about anyone providing empirical proofs or demonstrations in regards to ultimate reality. Theists do not need to provide empirical proof of God's existence. Our senses are limited and can observe only a small fraction of reality.  One needs to use the best epistemological framework, and intellectual tools, that is science, philosophy, and theology, to conclude the most case-adequate explanation of origins.
The investigator has to be honest, rigorous, and permit the evidence to lead wherever it is. The quest is not about

Either all physical existence, all being, the universe, was caused, created, and fine-tuned, the laws of physics and constants, life, consciousness, and objective moral values were instantiated
by

events by no mechanism by luck and chance

by an intelligent mind, a powerful eternal conscious creator

Either biological systems, ecosystems, and biodiversity originated by unguided evolutionary pressures, and long periods of time, or an acting intelligent agency, either using creation or evolutionary mechanisms.

It is commonly claimed that the alternative to intelligent design is chance. But the chance is not a mechanism. Chance is an occasion that allows something to be done. It is the statistical probability that a random, unguided event occurred naturally. Something that happens unpredictably without discernible intelligent intention or causal agency. Either all-natural, physical things, the universe, stars, galaxies, the earth, life, and biodiversity emerged by a lucky accident, spontaneously through self-organization by unguided natural events in an orderly manner without external direction,  purely physico-dynamic processes, and reactions, or through the direct intervention and creative force of an intelligent agency, a powerful creator. 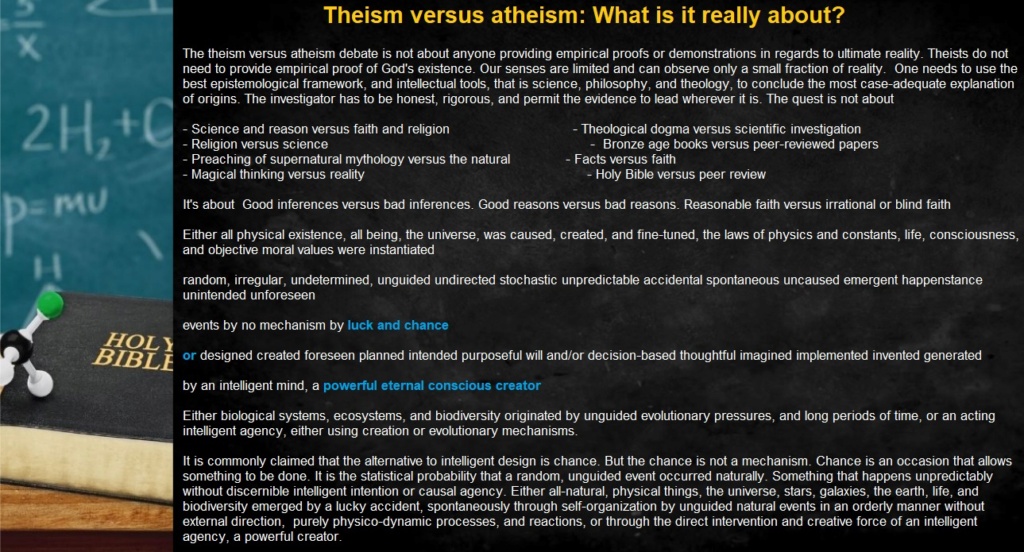 @Katherine Roberts  You made an examination of Gods existence, but so far, you have COMPLETELY failed to explain how we can rationally explain our existence WITHOUT a creator. You have in every interaction simply dismissed the evidence, without further reason. Either you don't have the education to analyse the evidence carefully, and there is nothing wrong about it, or you are not honest enough to recognize that

events by no mechanism by luck and chance do NOT explain adequately all physical existence, all being, the universe, the laws and constants that govern it like software, its fine-tuning to permit life, the origin of life, consciousness, and objective moral values. Its, frankly, a SILLY proposition.  Claiming that all these things were

by an intelligent mind, a powerful eternal conscious creator IS however a rational inference, because we KNOW by our own experience, that an intelligent conscious mind has foresight, intellectual activity, can calculate, think, form abstract ideas, imagine, introspect,  intend,  invent, generate information. It can make blueprints, machines, production lines, computers, compartments, transistors, turbines, energy plants etc. Thats what we all see LITERALLY in molecular biology, but on a MUCH more sophisticated level, than any human has ever been able to device with all its intelligence.


This has nothing to do with INDOCTRINATION, but with using reason and logic to come to plausible, logical, probable conclusions based on the evidence around us.
Yes. Nobody KNOWS what is ultimate reality, we don't have access to it, but we can use our mind to come to reasonable conclusions. No, you are not bursting my bubble. I am bursting yours.

Living life based on reality? What does that even mean? Either God exists, and our lives have meaning, the one our creator gave us, or not. Then, you can make up whatever you want. Its just an illusion. Without God, nor eternity, our lives have no meaning. None.

Re: Theism versus atheism: What is it really about?

Defending the Christian Worldview, Creationism, and Intelligent Design » Philosophy and God » Theism versus atheism: What is it really about?

» Atheism Vs Christianity | Dunkin' Atheism Vs FloridaMan
» Is theism wishful thinking ?
» Scientific advance leads to theism
» Worldview comparison Theism - Naturalism
» Atheists: what they must believe in order to refute theism