Bacteria that Glide with Helical Tracks

Behe, evolution devolves, page 38:
A flagellum is fine for swimming, but what if a microbe finds itself on a solid surface with perhaps only a very thin layer of water? In that case bacteria have two general forms of motion, “twitching” and “gliding.” As the names imply, twitching bacteria move in discontinuous, jerky motions, while gliding bacteria move smoothly on a surface. Gliding bacteria can be thought of as the unicellular world’s answer to snails—both excrete a trail of slime to help them travel along. But snails also use muscles and nerves and other organs that are available only to animals. What do single-cell creatures use to move? An early conjecture about a gliding bacterium named Myxococcus xanthus was that it moved by shooting slime from nozzles at its rear end, relying on the kickback to propel it forward.17 That would have been enchanting, but it turned out to be wrong. Instead, new information points to something equally
fantastic—the cell is essentially a tank that employs a motor to power moving circular treads. Researchers placed a fluorescent tag on a particular protein in the treads of the bacterium, and in the microscope they saw a Day-Glo ribbon that ran the length of the cell, turning as the creature moved along.

The authors of the research paper were amazed: “Astoundingly, these helices appeared to rotate within the cell cytoplasm as the cells moved forward.”18 “Astoundingly”—G. K. Chesterton would concur. Unlike military tanks in our everyday world, the cell isn’t heavy enough to generate much friction, so how does the bacterium grip the surface? That’s where the slime comes in. Excreted polysaccharide sticks to the surface as well as to the bacterium, giving it traction. Motor proteins use the tread as an internal highway, carrying a load of other proteins whose job apparently is to push against and distort the membrane, making little bumps on the surface that push on the slime, moving the cell forward. The cargo proteins hop off the treads once the motor loses contact with the surface and is circling back. So far at least a dozen proteins are known to be involved in the system. Just think of the controls that have to be in place to make it work successfully.

As if that weren’t enough, it turns out there’s more than one way for bacteria to glide. A bug called Flavobacterium johnsoniae—unrelated to Myxococcus xanthus—also glides and also has tank treads. But instead of bumps, it uses proteins that stick out of the cell like tire studs to dig into the slime. In other words, as experts in the field write, the slime “form[s] a ‘road’ that interacts with specific ‘tires.’”19 The exterior proteins are attached to a baseplate structure under the outer membrane, which in turn is connected to a complex of other proteins. And the complex is indeed very complex. It performs at least two critical functions needed for gliding. First, it is a pump that extrudes the protein pieces that work outside the cell interior—in other words, it helps to build itself. Second, and most spectacularly, it contains a rotary motor—only the third such motor yet discovered in life.20 Clever experiments that anchored the cell to a microscope coverslip through its “tire studs” showed the whole cell rotating! It’s like fixing the propeller of a plane to a pole and watching as the plane spins around. Since the motor is rotary but the movement of the cell is linear, researchers propose there is a rack and pinion gear system to convert the one type of motion to the other.21 How exactly that might be done remains obscure, but new discoveries will only increase the known complexity of the system.

Bacteria that Glide with Helical Tracks
Many bacteria glide smoothly on surfaces, despite having no discernable propulsive organelles on their surface. Recent experiments with Myxococcus xanthus and Flavobacterium johnsoniae show that both of these distantly related bacterial species glide using proteins that move in helical tracks, albeit with significantly different motility mechanisms. Both species utilize proton-motive force for movement. Although the motors that power gliding in M. xanthus have been identified, the F. johnsoniae motors remain to be discovered. 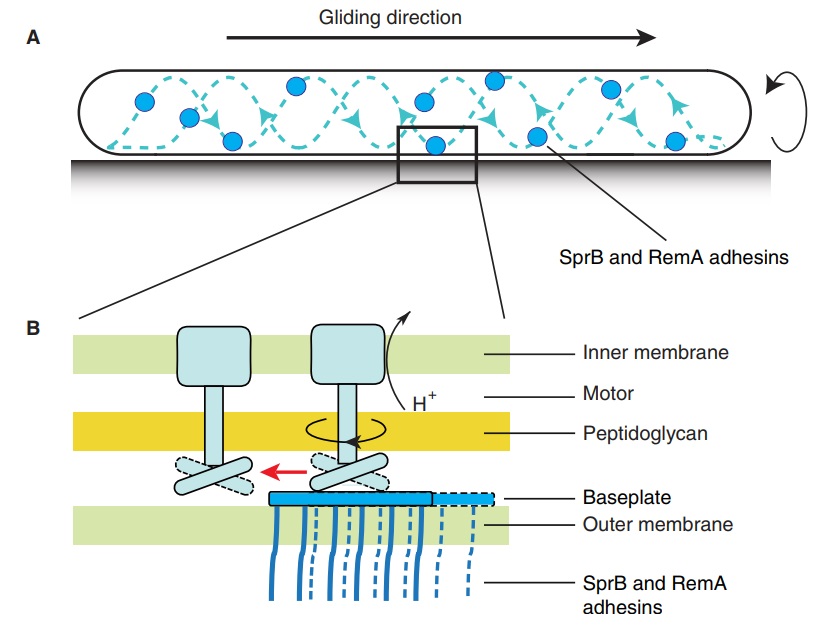