Every atheist that want to argue and debate me, should be prepared. He should know that I enter NEVER a debate because I am open-minded towards atheism. I am not. I am close-minded. As close-minded as it can get. You can call me a fundamentalist and non-tolerant. and indeed. I am. I do not know why I should even consider atheism to be true when I know it is not. So, if, dear atheist, it is your aim to convince me that your views might be true, and have some value to be considered, let me tell you before you waste your time on me: You won't leave the debate with a smile on your face, believing that you won, or that you might have been able to change my position one jota. You won't. You will leave with the sentiment that you did not reach anything. And that is true. You will NOT be able to convince me that God can be dismissed and that he is not necessary to explain our existence. I think I am doing a great service to you by telling you that, so in case your aim is to convert me to the empty gospel of nothing and drag me down to your ignorance and unbelief, you can save your time to watch " Ren & Stimpy "Adult Party Cartoon". You will feel that you employed your time better. But let me tell you.

I will let a small door open for you.

There are TWO things that would change my mind. You can try. Demonstrate me the bones of Jesus in the grave, like in the movie " The body " with Antonio Banderas, and you have destroyed my faith in the resurrected Jesus, and I commit to wire you us$ 1.000.000,00. Let me write that in extended letters: ( ONE million dollars ). HEY, you can become a millionaire !!

Secondly, you can meet my burden of proof, and falsify my claim that factories and machines cannot self-assemble. The only thing you need to do is an in vitro laboratory experiment in one of the University's dedicated to Abiogenesis research, and turn the basic chemical compounds that are required for life into a self-replicating cell. The simplest one is enough. If you can do that, I promise, I will get in touch with the Nobel prize organization in Stockholm and indicate you for the Nobel prize, and you will become very very famous. Try. Good luck.

And here some reasons, why I believe in God:

125 reasons to believe in God

Concluding a Creator as the best explanation of our existence is not an argument based on gaps of knowledge and ignorance, but on a solid epistemological framework and sound scientific, philosophical and theological reasoning, and what we do know, discovered and observed in the natural world.

From absolutely nothing, nothing comes. Creation demands an Intelligent Designer. If there were no creator, there would still be nothing. The universe had a beginning and requires, therefore, a cause. The universe cannot be past eternal. This present moment in time can't represent an actual infinite number of events added one to another proceeding from the past. Time has proceeded forward from the past as one event is added onto another to get us to today.  But we know that whenever you pause in the count as we've done today, that you can't have an infinite number of events.  Which means that there is not an infinite number of events that goes backward from this point in time. Which means the universe is not eternal. The physical laws require a lawmaker. The physical universe and its laws are interdependent.

There are over 150 finely tuned constants of the universe that must be all just right to the extreme. The expansion rate of the Big bang, the cosmological constant, the four fundamental forces,  and the earth, are fine-tuned and require a tuner. It is astonishing to say the least, that the number of electrons (in the universe) is equivalent to the number of protons to an accuracy of one part in 10 to the 37th power. If it were not so, galaxies, stars, and planets would never form. Quarks and anti-quarks form via matter-antimatter pair production. Because of their nature, these particles instantly annihilate each other. However, during the Big Bang, a slight asymmetry in this pair production resulted in approximately 1 extra particle of matter for every 10 billion produced. It turns out that this 1 in 10 billion ratio of “leftover particles” happens to be the exact amount of mass necessary for the formation of stars, galaxies, and planets. As much as 2 in 10 billion, and the universe would have just been filled with black holes. As little as 0.5 in 10 billion, and there wouldn’t have been enough density for galaxies to form.

Life comes only from life.  How is the origin of these things best explained? Supercomputers, hardware, software based on a language using signs and codes like the alphabet, an instructional blueprint, complex machines, factory assembly lines, error check and repair systems, recycling methods, waste grinders and management, power generating plants, power turbines, and electric circuits ? Randomly, by unguided, accidental events, or intelligent invention, planning, design, and implementation?  Chance is the ONLY causal alternative, once design is excluded, to explain the origin of biological Cells, which are literally miniaturized, ultracomplex, molecular, self-replicating factories. Conscience,  free will, morality, human values, logic, speech, the mind, and beauty are also all best explained through design. Based on evidence and observation, it makes the most sense, and it is rational to conclude that the probability is far far higher, that the natural world was created, rather than not. That is not an argument of ignorance but based on positive scientific evidence.

The day when scientists discovered that the universe most probably a beginning, it was doomsday for naturalism. Even more, when unprecedented evidence elucidated the shocking and incredible fact that the universe, from the quantum to the macro scale, was adjusted in the extreme to make life possible on earth.
When it became clear, that DNA stores codified information, as well. When it became clear, that biological Cells are miniaturized factories, the funeral bells for a worldview without God where ringing. And so, when science became slowly to realize that Darwin's idea was a fluke.

Nonetheless, atheists are singing, mocking, rattling their instruments, blowing their trumpets, organizing marches for humanism and secularism, celebrate their stars, open temples to express their unbelief, name calling who defies them and doing nothing else than expressing their brainless blindness. What a strange world in which we live..... 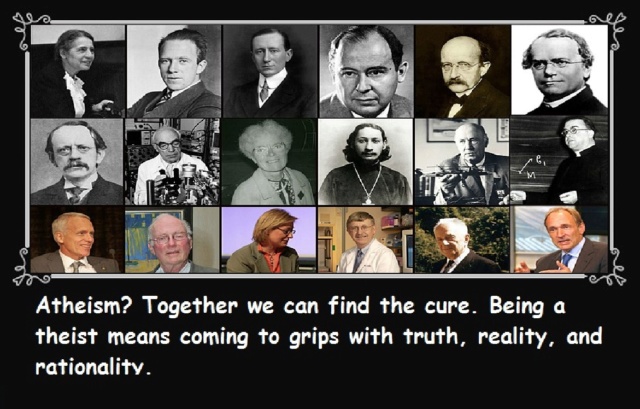