Defending the Christian Worlview, Creationism, and Intelligent Design » Philosophy and God » Incredulity: The Argument from incredulity

Incredulity: The Argument from incredulity

The Argument from incredulity is when a person accuses opponents to use arguments of incredulity when they are actually guilty of it themselves, (disbelieving and being skeptical of what is true and repeatedly proven) and they make attempts to evade the current evidence and observation instead of dealing with alleged evidence by refuting it and acknowledging that it exists. IOW, my argument is not in disbelieving what is objectively factual, it is actually your argument that is doing this in the face of what we DO observe.

"Incredulous" basically means "I don't believe it". Well, why should someone believe a "just so" story about HOW reality came to exist? That is the THING that we are incredulous about - a *certain scenario* ( naturalism, cosmological, chemical, and biological evolution, abiogenesis, and Neo-Darwinism, and that irreducibly complex biological system, coded, instructed or specified complex information, and entire factory complexes composed of myriads of interconnected factories, full of computers and robotic production lines could emerge naturally ) that's only *imagined* about how various amazing abilities of animals and plants happened all by themselves, defying known and reasonable principles of the limited range of chance, physical necessity, mutations, and  Natural selection. The proponent of naturalism is "incredulous" that an intelligent creator/designer could exist, beyond and behind our entire space-time continuum, who is our Creator. But there is nothing ridiculous about that - especially if you can't personally examine reality to that depth - how do you know nature is all that exists? What IS ridiculous (IMO) is trying to imagine a *naturalistic origin* of these things.  What we need, is giving a *plausible* account of how it came about to be in the first place, and the " No-God hypothesis" simply doesn't cut the cake.

Incredulity is based on human experience and on what we actually know. For example, the belief in abiogenesis can be strongly doubted, one can be skeptical of it, in fact, because it has never been observed and all proposals have to lead to a dead-end so far. So it is more than rational to look somewhere else.  What has been observed is biogenesis, life coming from life. What we know is that the complexity in the natural world of living organisms is similar to, in fact much greater than, the complexity of intelligently created devices, such as the clock or the computer. You might imply that incredulity is an unreasonable position, but it is in fact a foundation for all critical thought. Sensible people do not believe things without evidence. Consider the opposite, credulity; there is no context in which that is not a pejorative word! Considering what atheists are willing to believe, can indeed be classed as credulous.

Incredulity is an argument of skepticism about a certain point of view, and the evolutionist and atheists are not innocent of using such an argument. Incredulity, doubt, and skepticism about God and special creation are implicit in every naturalistic explanation about abiogenesis and many other facets of their viewpoints.

Claim: I don't believe in two-thousand-year-old stories from sheepherders filled with discrepancies, virgins giving birth, snakes and donkeys talking. What you believe is that your God spoke a word and then piled up some mud, and took a rib from the mud guy and created life.
Response: If nature is all there is, either nothing must have produced the physical laws and matter, space and time, or the universe would have to be eternal, which is impossible. Then, for no reason or purpose, somehow, magically, by random chance, the right parameters finely tuned to produce the right expansion rate of the universe and stars, which are necessary for advanced life to exist. Then, somehow, a finely tuned earth and moon formed, and chaos began to order, all by itself.  The right amino acids gathered somewhere deep in the ocean near hydrothermal vents, and a lucky selection process sorted the right amino acids out, twenty of them out of over five hundred different kinds, selected only the left-handed ones used in life, somehow a DNA code emerged, matter produced information ( a non-material entity ) the instructional blueprint to make over 500 different specified proteins, each with an average length of over 300 amino acids, for no reason or purpose, but somehow a metabolic network emerged, interconnected the proteins, encapsulated them into a phospholipid membrane. Somehow, self-replication began, and complexity began to increase, from unicellular, multicellular life emerged, then by happenstance and a lucky genetic accident, suddenly organisms became conscient, non-reason produced reason, non-logic produced logic, then began communicating, advancing until complex language formed, and last not least, a moral code of conduct in homo sapiens.  How many times did that list violate the laws of physics, logic, and information? 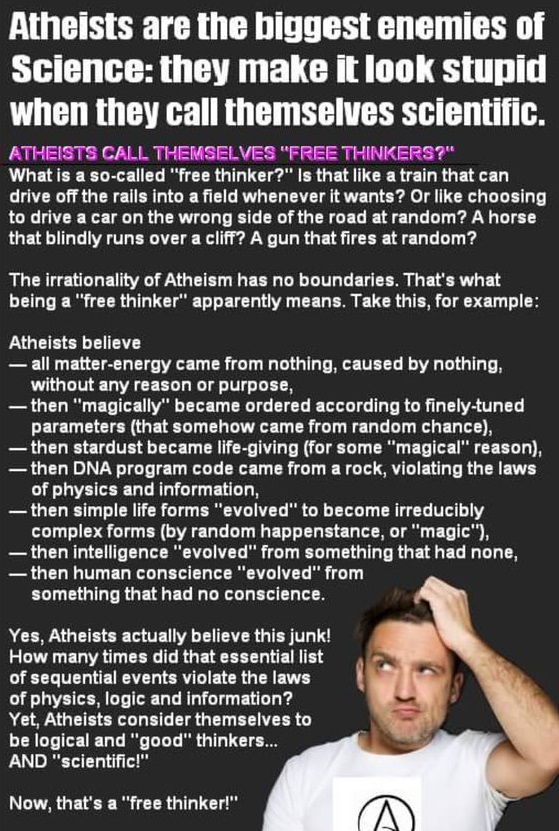 Defending the Christian Worlview, Creationism, and Intelligent Design » Philosophy and God » Incredulity: The Argument from incredulity