Defending the Christian Worldview, Creationism, and Intelligent Design » Molecular biology of the cell » Cell internet: Cells have their own internet communication channels and cargo delivery service, all in one

Cell internet: Cells have their own internet communication channels and cargo delivery service, all in one

Cell internet: Cells have their own internet communication channels and cargo delivery service, all in one Fri 14 Dec 2018 - 12:27

Posts : 6543
Join date : 2009-08-09
Age : 55
Location : Aracaju brazil
Cell internet: Cells have their own internet communication channels and cargo delivery service, all in one

Although cells are considered the most basic characteristic that defines life, it is actually the conversations among cells, and also the conversations that take place inside them, that determine biological activity and produce the essence of life.

1. The setup and implementation of sophisticated, complex and advanced communication networks like the internet depend on the invention of highly intelligent, skilled communication network engineers.
2. Multicellular organisms use several extremely advanced communication systems, like Tunneling nanotubes (TNT's),  Extracellular Vesicles ( VT's) which are, on top of that, also cargo carriers ( there are also cell-cell gap junctions and exosomes ). The size of the communication and cargo delivery network of the human body is 75 thousand times the size of the entire world wide web, if there would be just one communication connection between each cell ( in reality, things are far more complex: each neuron cell computer may be connected to up to 10,000 other neurons )
3. This is amazing evidence that multicellular organisms and their communication systems were definitively created by an unfathomably intelligent designer.

Imagine the internet not only as a world wide web for an interchange of information and communication but also a courier delivery service carrier of goods, like FedEx. That would be pretty convenient, wouldn't it? In 2018, there are an estimate of 4 billion computers connected through the internet, worldwide.  Most recent data estimates the number of human Cells to 3.0·10^13 4  If we put that each cell uses just one communication channel to interact with other cells, then the size of the communication and cargo delivery network of the human body would be 75 thousand times the size of the world wide web !!

When biting into an apple, the body will immediately signal a complex sequence of messages and processes to break down the apple into energy and essential structural nutrients for cellular repair and replacement. That initial signal activates communication throughout the entire body, enabling metabolism to send support to every facet of the organisms function, be it mental, emotional or physical. Health and performance are completely dependent upon how efficient that signalling and communication process works. 5

Cell-Cell interactions are performed in multicellular organisms through a sophisticated intercellular communication machinery. There are many ways like gap junctions and exosomes. But recently, it has been discovered that Cells talk and help each other via tiny tube networks. Cells are known to use intracellular microtubules, veritable nanotubular highways which direct proteins to their correct final destination inside of Cells. But, remarkably they are also used for intercellular communication, from Cells to Cells, and furthermore, for organelle Transport between Cells.

Tunnelling nanotubes (TNT's) and other bridges between cells act as conduits for sharing RNA, proteins or even whole organelles. These cryptic conduits between cells, long tubes in mammalian cells, transport not just molecular signals but much larger cargo, such as viral particles, prions or even mitochondria, the cell's energy-generating structures. They transfer all kinds of cargo, microRNAs, including messenger RNAs, proteins, viruses and even whole organelles, such as lysosomes. Moreover, ions like calcium (Ca2+) and different proteins lipid components of the membrane have all been identified to have the ability to cross TNTs in various cell types. Moreover, the latest findings demonstrate functional roles in physiological and pathological processes, such as signal transduction, micro and nano-particles delivery, immune responses, embryogenesis, cellular reprogramming, and apoptosis.  They are a critical requirement for development, and tissue homeostasis and regeneration. Recent studies have been shown the important role of TNTs in mechanical and signalling processes during embryonic patterning and development. ATP and motor protein kinesin, dynein and myosin are required for the cargo transfer by TNTs.

Interestingly, gap junctions, as an important cell-to-cell communication for electrical conductivity and Ca2+flux, were found to have a role in TNT-mediated Ca2+transfer between cells. TNT's associated with gap junctions were shown to support the bi-directional spread of electrical signals, leading to the activation of low-voltage-gated Ca2+channels in the coupling cell. Electrical synchronization between distant cells through TNTs leads to activation of downstream target signalling. The results of different studies implicate the importance of electrical signalling in control cell behaviour and developmental processes, such as the establishment of left-right pattern in embryos, tail regeneration of Xenopus, and wound healing. Electrical signalling is important in embryogenesis.TNT's associated with gap junctions induce bi-directional spread of electrical signals between cells.

TNT-mediated communication can induce immune responses in target cells. They have as well an essential role in mechanical and signalling processes during embryonic patterning and development and a significant role in vertebrate gastrulation. They mediate the transfer of proteins between distant cells.

(These observations demonstrate an awe-inspiring level of sophisticated connectivity between cells.

These fragile structures are appearing in normal embryonic development. And stressed or ailing cells induce them by sending out signals to call for help. It’s unclear yet, though, how healthy cells sense that their neighbours need help or how they physiologically “know” what specific cargo to send.

To make things even more remarkable, TNT form among several cell types, including neuronal cells, epithelial cells, and almost all immune cells.  There are many different types of cells which are able to communicate using TNTs, and their functions are impressive. In myeloid cells (e.g., macrophages, dendritic cells, and osteoclasts), intercellular communication via TNT contributes to their differentiation and immune functions. Importantly, TNT enables myeloid cells to communicate with a targeted neighbouring or distant cell, as well as with other cell types, therefore creating a complex variety of cellular communication and cargo exchanges. 3 TNT mediate even long-range communication, independent of soluble factors. They are membranous structures displaying a remarkable capacity to communicate with selected neighbour or distant cells.

It has also been reported TNTs can contribute to cellular differentiation and reprogramming by providing a highway to transfer cellular components from one cell to a target cell.

Moreover, if TNTs are akin to skywalks, the enclosed footbridges that connect separate buildings, then gap junctions — gated pores that pass through the membranes of neighbouring cells — are like doorways between adjacent rooms. Exosomes, small vesicles shed by cells, were long thought to be cellular trash bags carrying debris, but scientists now recognize them as vehicles for carrying microRNAs and other signalling molecules between cells, sometimes over long distances.

Cells use different means of biological communication and signal transduction constituting direct physical contact between cells such as receptor-mediated interaction or cellular junctions between neighbouring cells. Receptor-mediated cellular interactions are facilitated by certain transmembrane proteins and cell adhesion molecules such as integrins, tetraspanins, and cadherins. The direct coupling of the cytoplasm of two cells through gap junctions (GJs) and concomitant transport of cytoplasmic material is also considered essential process in cellular cross-talk and is important for maintaining tissue homeostasis, development, and cellular differentiation.

In the absence of direct physical contact, cells may convey biological messages in paracrine fashion through secreted factors such as cytokines, chemokines, and secreted growth factors.

Cell-to-cell communication is a critical requirement to coordinate behaviours of the cells in a community and thereby achieve tissue homeostasis and conservation of the multicellular organisms. Tunnelling nanotubes (TNTs), as a cell-to-cell communication over long distance, allow for bi- or uni-directional transfer of cellular components between cells. During the last decade, research has shown TNTs have different structural and functional properties, varying between and within cell systems.

Direct cell-to-cell communication is a critical requirement for development, tissue regeneration and conservation of normal physiology of multicellular organisms. Plants share their cytoplasmic contents through intercellular channels called plasmodesmata, whereas animal cells possess analogous gap junctions and tunnelling nanotubes (TNTs) In 2004, for the first time, Hans-Hermann Gerdes as a researcher at EMBL Germany reported a novel cell-to-cell communication channels that called tunnelling nanotubes. They are thin tube structures which protruding from one cell and connecting with another to form a nanotubular network with the surrounding cells. These intercellular bridges are not empty membrane tubes but filled with cytoskeletal filaments, like actin, microtubules and motor proteins.

How the Internet of cells has biologists buzzing
Yamashita's tubes joined a growing catalogue of cryptic conduits between cells. Longer tubes, reported in mammalian cells, seem to transport not just molecular signals but much larger cargo, such as viral particles, prions or even mitochondria, the cell's energy-generating structures. These observations suggest an unanticipated level of connectivity between cells, says Amin Rustom, a neurobiologist at the University of Heidelberg in Germany, who first spotted such tubes as a graduate student almost 20 years ago. If correct, he says, “it would change everything in medical applications and biology, because it would change how we see tissues”. 1

Cell-to-cell communication is a crucial prerequisite for the development and maintenance of multicellular organisms. To date, diverse mechanisms of intercellular exchange of information have been documented, including chemical synapses, gap junctions, and plasmodesmata. Furthermore, there are highly sensitive nanotubular structures formed de novo between cells that create complex networks. These structures facilitate the selective transfer of membrane vesicles and organelles. 2

Over the last decade, a large body of evidence has accumulated to show that cells use cytoplasmic extensions comprising open-ended channels called tunneling nanotubes (TNTs) to connect cells at a long distance and facilitate the exchange of cytoplasmic material. TNTs are a different means of communication to classical gap junctions or cell fusions; since they are characterized by long distance bridging that transfers cytoplasmic organelles and intracellular vesicles between cells. 6 Intercellular communication and the exchange of biological information between cells and organs is considered one of the sophisticated means of cellular coordination which modern eukaryotes have to meet the needs of body physiology. 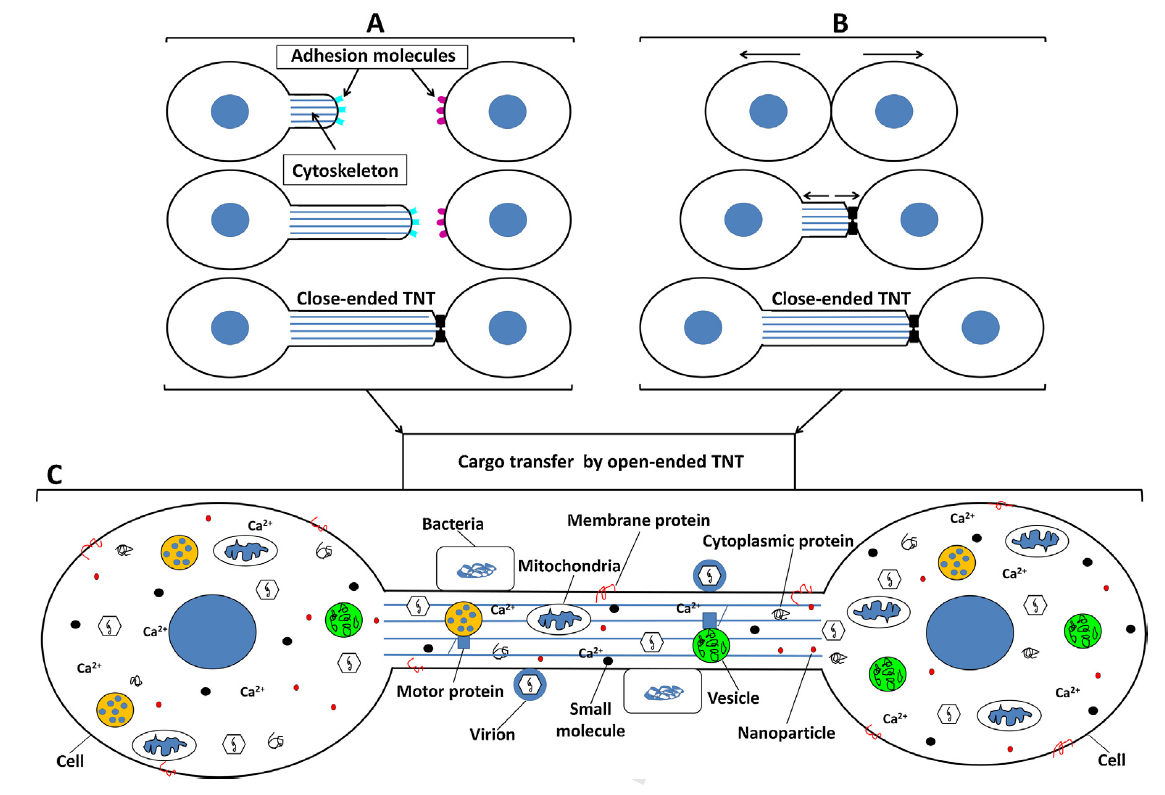 TNT formation between cells
Filopodial interplay mechanism (A) and cell dislodgement mechanism (B); and schematic representation of cargo transported along open-ended TNT (C). 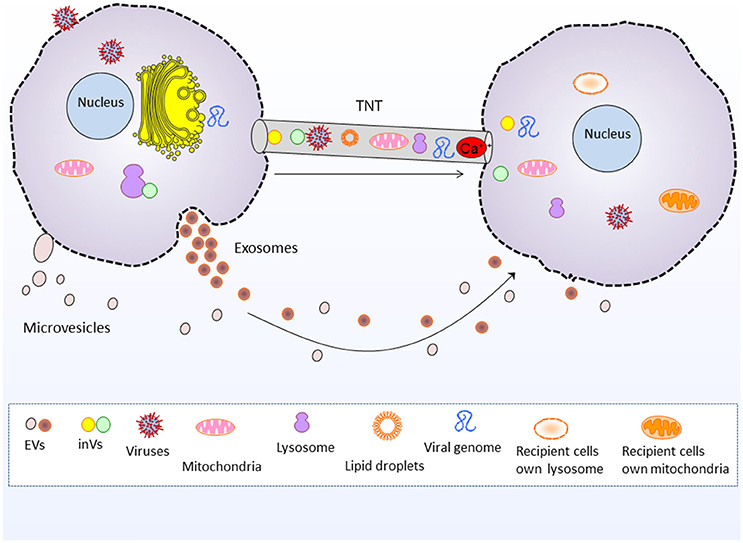 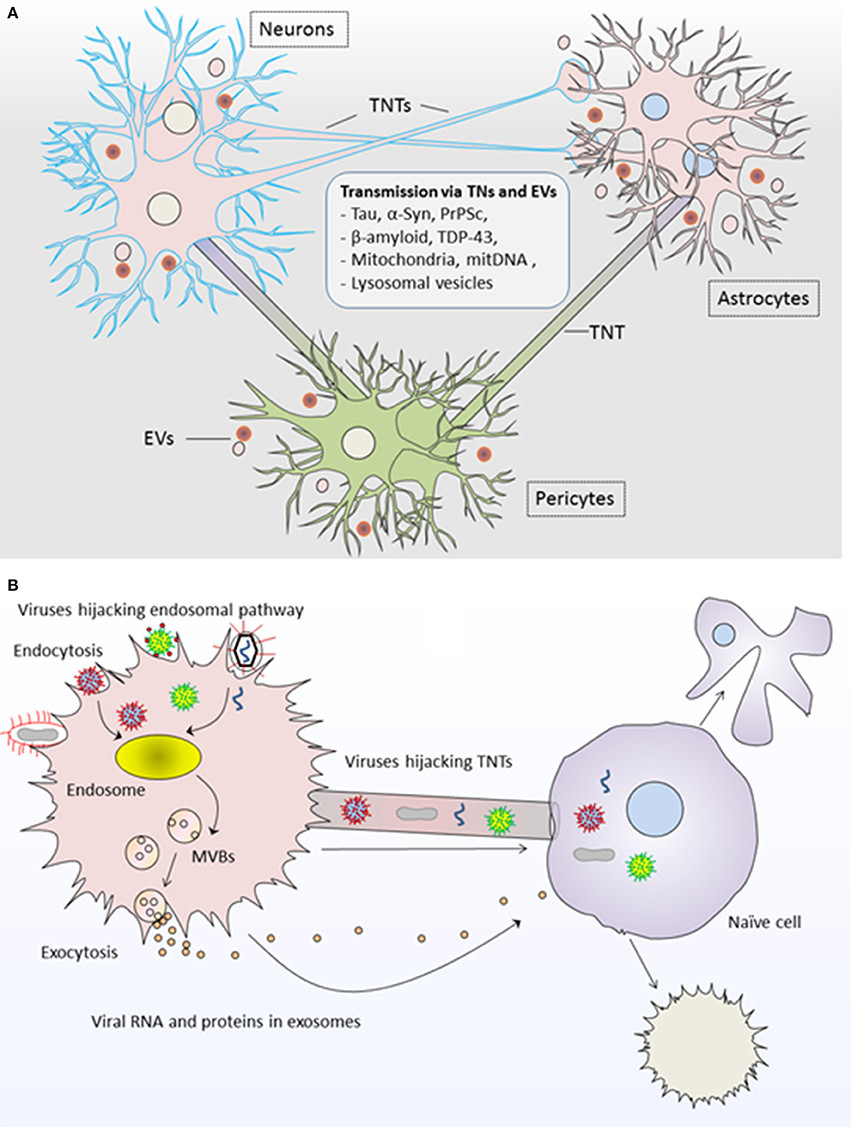 Roles of tunnelling nanotubes and extracellular vesicles in the pathogenesis of diseases.
(A) TNT's and EVs transport neuropathogenic proteins and genetic content between neurons, astrocytes and pericytes and result in neurodegenerative pathology such as tauopathies and synucleinopathies including Alzheimer and Parkinson's disease.
(B) Viruses highjack both TNTs and EVs for the propagation of viral infection. Viral RNA/proteins are incorporated into EVs via an endosomal pathway and are transferred to unaffected naïve cells; whereas viruses may use direct transfer to naïve cells via TNT's. In both modes of propagation, the recipient cell may undergo cell death or transformed into infected cell pathology further spreading the infection to other cells. TNT's, Tunneling nanotubes; EVs, Extracellular Vesicles. 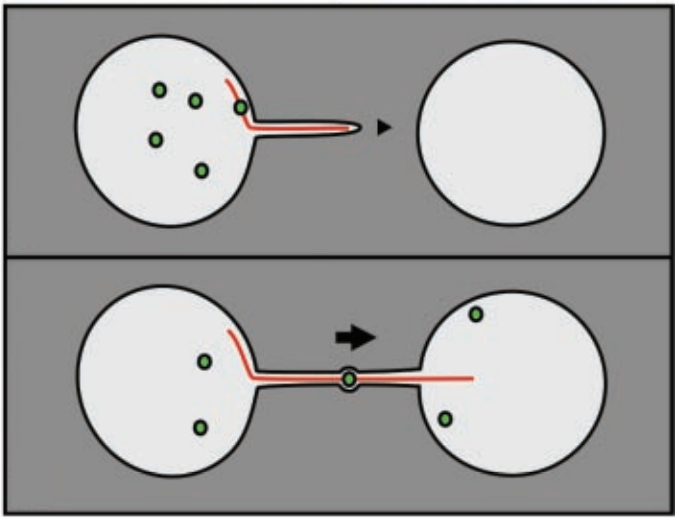 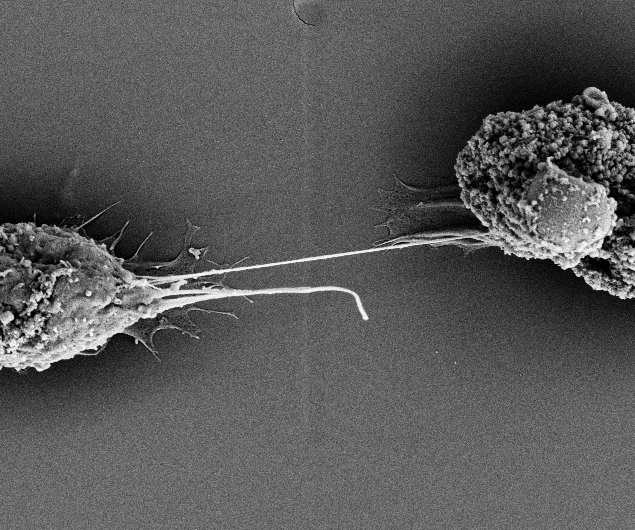 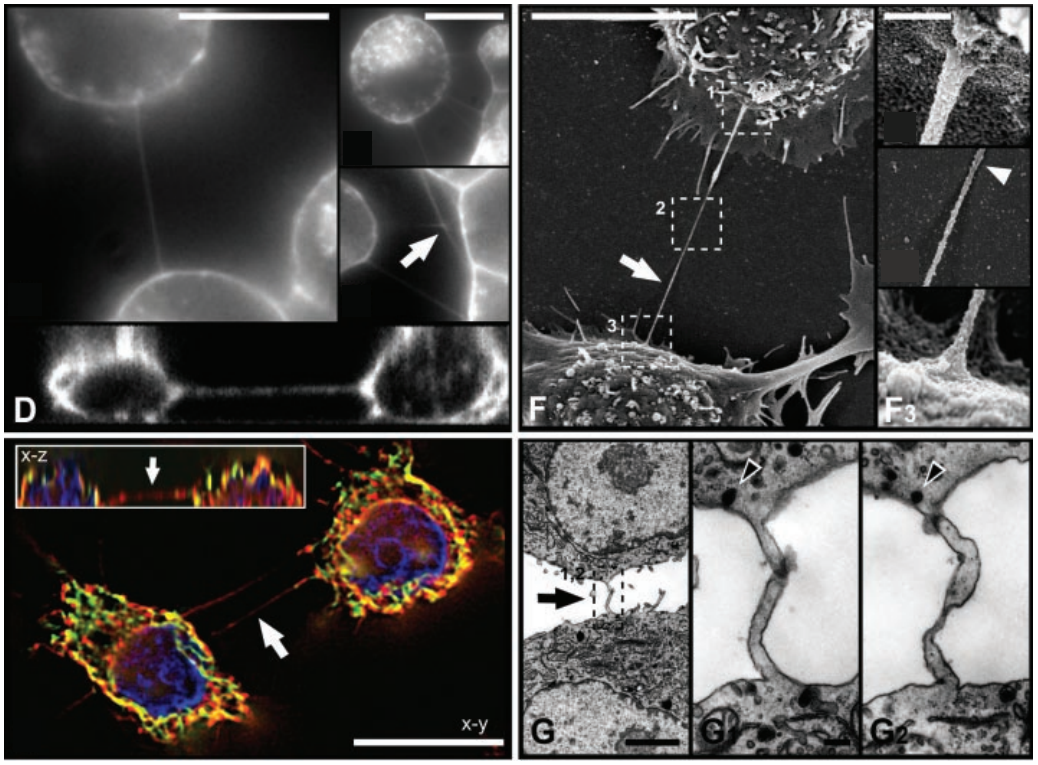 Architecture of TNT's between cells

Defending the Christian Worldview, Creationism, and Intelligent Design » Molecular biology of the cell » Cell internet: Cells have their own internet communication channels and cargo delivery service, all in one

» How does biological multicellular complexity and a spatially organized body plan emerge ?
» Awe-inspiring biophoton cell-cell communication points to design
» Cell-Cell Communication in Bacteria
» Origins - what cause explains best our existence, and why?
»  Kinesin and myosin motor proteins - amazing cargo carriers in the cell