Defending the Christian Worlview, Creationism, and Intelligent Design » Philosophy and God » Atheism » Why the “I Just Believe in One Less God than You” Argument Does not Work

Argument: “I contend we are both atheists, I just believe in one less god than you do. When you understand why you dismiss all the other possible gods, you will understand why I dismiss yours.” Another way to phrase it: “I don’t have to take the time to reject Christ any more than you have to take the time to reject all the millions of gods that are out there. It just happens by default. The justification for my atheism is the same as yours with respect to your rejection of all the other possible gods.” And another: "I don’t believe in Yahweh. I don’t believe in Hercules either."
Response: Christianity believes in only one God (monotheism) out of theological and philosophical necessity. We believe that God created all things out of nothing. We believe that existence necessitates a “first cause” or an “unmoved mover.”

Christians believe as the apostle Paul said in Romans:  all men have knowledge of God, at least of the Creator, through his creation. But man in his fallen state creates false Gods, idols, and they begin to get God wrong; they have distorted views of God. But they do not have NO vision of God. We believe that they believe wrong things about the Creator. That is very different from saying that we are atheists in relation to other people's pre-Christian ideas of the one supreme God.

That wisecrack about how atheists merely believe in one less god than theists do, though it makes a funny line in a Tim Minchin song, is just a category error. Monotheism's God isn't like one of the Greek gods, except that he happens to have no god friends. It's an utterly different kind of concept.

The question isn't a scientific one, about which things exist. It's a philosophical one, about what existence is and on what it depends. 1

1. Contingent or non-necessary beings depend on an external cause that made them come into existence - the physical universe – is also contingent.
2. Since that external cause has to be outside the whole aggregate of contingent things, it cannot itself be contingent. So it is necessary.
3. Hey presto, we’ve demonstrated that there is a necessarily existent, uncreated, non-contingent being which causes all other things! And this, of course, is God.

This first or necessary cause/being is by definition God. Simply put, whoever started it all (the time, space, matter creation) is the only true God.  The God of the Bible cannot be compared to the pantheon of gods of polytheistic religions. It is like comparing apples to bananas. A further consequence of this argument is, that if all Causal agencies of our universe are removed, absolutely nothing remains. One attempt is to replace a cause of the universe by stating that the Universe eventually existed without beginning, eternally.

The scientific objection to that is the 2nd law of thermodynamics or the law of entropy. In a closed universe, the finite amount of energy is winding down, moving towards a time when all energy will be expended. The universe with its limited amount of energy is going to wind down to where there is no energy left.

The philosophical reason is that we can never get to an infinite period of time in the future by adding individual events together. But today, this point of time in the present is a point of time future to all past. We are future to yesterday, and the day before that. It is not possible that the Universe has existed forever. This point in time is the future with reference to all of the past.  You cannot say that any particular point in the future will accomplish an actual infinite as events are added one to another.  Therefore, this present moment in time can't represent an actual infinite number of events added one to another proceeding from the past.  Time has proceeded forward from the past as one event is added onto another to get us to today.  But we know that whenever you pause in the count as we've done today, that you can't have an infinite number of events.  Which means that there is not an infinite number of events that goes backwards from this point in time.  Only a finite number of events.  Which means the universe is not eternal but had a beginning. Since everything that begins to exist has a cause, the Universe had a cause. Only the God of the Bible is described with the following characteristics:

Exists outside of His creation, created the physical universe, is eternal, self-existent, exists outside of time and space,  is Omnipresent - he created space and is not limited by it, is timeless and changeless - he created time, immaterial - because He transcends space, conscious, intelligent, and personal - the impersonal can’t create personality, necessary - as everything else depends on Him, infinite and singular - as you cannot have two infinities, purposeful - as He deliberately created everything, moral - no moral law can exist without a lawgiver, caring - or no moral laws would have been given. 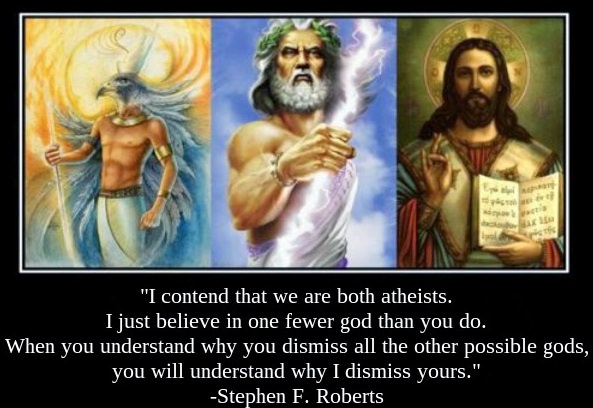 Defending the Christian Worlview, Creationism, and Intelligent Design » Philosophy and God » Atheism » Why the “I Just Believe in One Less God than You” Argument Does not Work