Presupposition - a thing tacitly assumed beforehand, or taken for granted, at the beginning of a line of argument. 1

Greg Bahnsen, one of its primary advocates,  writes:
All men have presuppositional commitments prior to their examination of various hypotheses. In the nature of the case, apologetics requires that we argue with the unbeliever in terms of each other's most basic assumptions. We must challenge each other's final standards. This means that we must contest the grounds on which our opponent stands, showing that only within the context of the theist's worldview could he know anything at all.

Presuppositionalists argue that:
- probability leads the skeptic just to find reasons to reject the newly presented evidence and inference, and that will not lead to a change of mind, faith and worldview.
- insist that our knowledge must begin with and rest upon an absolutely certain foundation: the ontological truth of God’s existence and revelation in nature and direct revelation.
- presumes that every human "knows" that a god exists, and that the Scientific theory of evolution is simply a forgery from sinners made by "shoehorning evidence" in an attempt to pretend said God doesn't exist.
- suggest arguing with atheists from the beginning that all people have clear knowledge of God and His laws through natural revelation and in virtue of having been created in God’s image.
- Human knowledge necessarily presupposes God. We can obtain knowledge that is trustworthy. Therefore, God exists.

I tried that approach, and it flew right in my face from the counterpart, that I was lying, not knowing about the others state of mind and belief.
I am unsure if it makes sense right in the beginning, that we argue with the unbeliever that he suppresses natural revelation in unrighteousness, when we try to establish a common ground, and not a discourse which raises barriers and contempt. While theists traditionally understood God to be absolutely ultimate, how can that be used as an argument, when the atheist does not acknowledge that belief a priori? Presupp's take the Bible as their pre-rational axiomatic concept. How can the atheist be convinced based on arguments from the Bible, if he does not as well, believe the Bible is true, a priori ?
W.L.Craigs critique is that presuppositionalism is begging the question.
" Very few people find presuppositionalism convincing if they are not already believers. But there might be aspects worth of considering."

Everyone uses some degree of circular reasoning when defending its ultimate standard. Yet if used properly, this use of circular reasoning is not arbitrary and, therefore, not fallacious. In fact, the atheist also has to start with the presupposition that he can trust his reasoning and senses. He understands himself to be able to understand and talk intelligibly about the world. Logic, scientific inference, and objective ethics are pressupposed by atheists, even if not justified.

Methodological naturalism uses also the method of presuppositionalism, design is excluded a priori, even IF the evidence leads to that direction. Methodological naturalism does not distinguish between operational, and historical sciences. That forces to interpret the evidence through naturalism since it is presupposed on a naturalistic world-view; if one interprets the evidence without this restriction, one will see that it leads undeniably to the truth of God's existence. A creator better explains the data.  The atheists misuse that wrong philosophical framework upon which science works and try to argue that for that reason,  intelligent design is not science, and not trustworthy.  The evidence of adaptation or micro-evolution is extrapolated to shoehorning macro-evolution and common ancestry in an attempt to pretend said god doesn't exist. Evolution is in fact based purely on religious presumptions.

So, macroevolution is not based on evidence that speaks for itself; rather, it is a deduction based on the atheists own presuppositions—an apriori commitment to materialism and rejection of a designer because they can’t bear and do not want to admit a ‘divine foot in the door’.

If our biological features, and more importantly our cognitive machinery evolved from some random forces of nature, how can we trust our brain and our thinking? If we are just an evolved, ape-like being, the result of random mutations, why should we believe that our thoughts or someone else's arguments, make any sense, and are not rather cognitively limited? Materialism claims that everything has a material cause. That would include human behaviour. That would include the workings of the brain, which is said by atheistic materialists to be equivalent to the mind. Therefore we are the directed, not the directors of our actions. This, in turn, leads to the inescapable conclusion that no human belief, rationalization, or mental process can be relied on with respect to anything. A deterministic view such as this obviously undercuts the ability to direct one's own destiny or thoughts. Without the assumption of a Creator, we would be reduced to inductive skepticism and nihilism, the view that there is no good reason to believe that our mind and rational process and its conclusions are rational and trustworthy.  Thus, atheists who use science in arguing against theism have to presuppose the truth of the very thing they are attempting to refute.

Epistemic dependency is consistent with the view that humans, and therefore human knowledge, require God for their existence. God is the necessary presupposition of all rational logical thought.  It refutes the view that man can obtain trustworthy knowledge if our brain is the result of random naturalistic and evolutionary processes.  We can only trust our thoughts if we acknowledge that God created man to his own image - if we acknowledge God’s existence which created our cognitive faculties.

Unlike presuppositionalists, I hold the view that classical and evidentialist apologetics is as well a powerful toolkit to refute naturalism and point to theism, rejecting the view that non-intelligent causal mechanisms of our origins have sufficient probabilistic reasons to be convincing. and can be used side by side together with presuppositionalism. A valid deductive argument is an argument in which the conclusion is based and inferred by the premises.

That leads to the Transcendental Argument for the Existence of God (TAG). Our rational thinking is only trustworthy if originating from an infallible and omniscient,  rational and intelligent creator. So whatever we have, even the knowledge which we have about the world, has a precondition that it is due to reason given to us from God.

Theism is a necessary precondition for the intelligibility of human knowledge. We depend on the view that God created man in his own image, with the ability to think and come to trustworthy rational conclusions,  for their ability to obtain knowledge in two distinct, but related, ways: first, through the Transcendental Argument for God ‘TAG’, and second, by denying that naturalists can consistently claim to be able to achieve  knowledge that is trustworthy. It maintains that certain things that atheists assume are true can only be true if there is a God. Primarily these atheistic assumptions are the beliefs that logical reasoning is possible, that scientific inference is justified, and that objective moral standards exist. So if an atheist uses logic to refute a theistic argument, uses scientific evidence to undermine some theistic position. TAG maintains that the atheist is implicitly assuming that his reasoning is trustworthy, when, upon his worldview, he cannot be certain of this. Logic and science would be impossible without God, and the argument from evil assumes an objective standard of moral values exists, which is also impossible without God. The principles of logic can only be trusted if God created them with the purpose to be used as instruments for us to make sense of the world.

One part of TAG is that inductive inference--that is a probabilistic inference in which the conclusion is supported by the premises--presumes the existence of a creator that created us with mental faculties are based on a solid foundation, and trustworthy.

Sye ten Bruggencate, among others, has said that the purpose of presuppositionalism is not so much to change minds as to "close mouths".
Some argue that it makes no sense to debate atheists, because they have already pre-established that they want to live autonomous to God, and as such, no rational argument for his existence is relevant.
To that, i counter that we, believers, are called to give atheists good reasons to believe in God, and as Christians, in special, tell them about Gods call of repentance, surrender to his offer and grace and forgiveness, and offer of eternal life. If the unbeliever rejects that call, its upon him and God. He, at least, will not be justified by claiming that he had no opportunity to convert.

I think traditional or classic apologetics and natural theology, creationism, and in special, intelligent design does close mouth, today, better than ever before. And with the advance of biological sciences in special, the inference of design is becoming more and more justified and clear: eliminative inductions based on the fact that natural causes do not suffice to explain the existence of informational codes, and factory-like interdependent and irreducibly complex structures like cells and organisms, justify the inference of intelligent causes  as best explanation of origins. As such, the atheist has no reasons to remain a non-believer but is cornered to admit that he chooses to remain so based on will and bias, not reason.

Atheists take commonly the stance that theism is worth and true only after proofs are provided - and the burden of proof lies on the theist. And, as long as the burden of proof is not met, they see their view granted to remain skeptic. Putting the point aside that both worldviews need to be evaluated against each other, to see which side has the better arguments and interpretation of the evidence:  How can we best answer to someone that takes that stance? I have experienced over the years, that atheists commonly do not consider honestly the rationale that leads to theism, and Christianity in particular. No matter, how eloquent, rational, and convincing the explanations and arguments are.

When I was a new convert, and doing street evangelism, i used a simple analogy, which is true: You can only know how a Ferrari drives, if you do a test drive. I can explain to someone in all details how it drives, but unless a test drive is done, that person will not have real knowledge about the experience. So it is with Christ. A non-believer cannot experience Christ, unless he takes a leap of faith, and says to himself: I want o try it out.
Ultimately, it makes no difference, what method someone uses. If the other side is not open, even the most eloquent arguments will not be convincing.

Conversion is a matter primarily of the heart. And sustained rationally. A believer gives support to his belief with reason. But first, he needs to WILL to come into a relationship with God. And that depends on factors, that are outside of the reach of an evangelist. All we can do is, as servants of the Lord, proclaim the gospel, pray for unbelievers, live a life that unbelievers can see the difference, and the rest is in Gods hands. 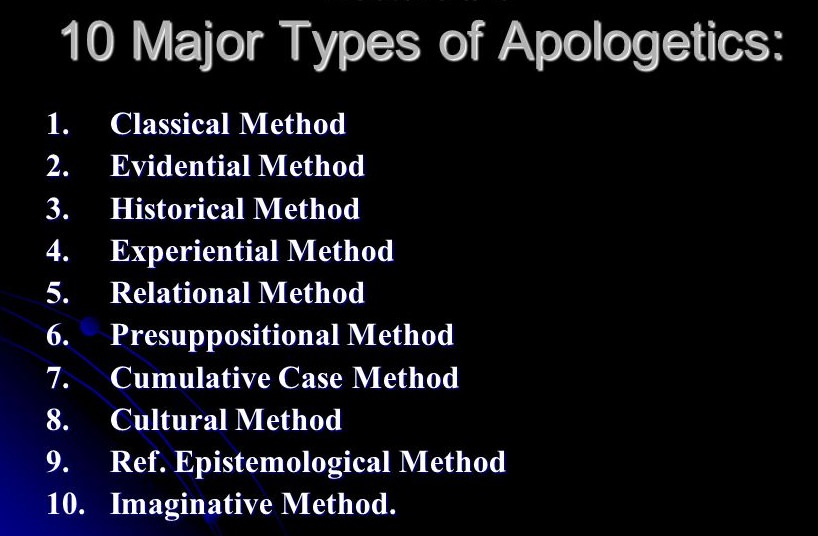