Cell-intrinsic timing, biological clocks, cell division counting, and other mechanisms control the growth and division of cells - evolution, or design ?

Cell-intrinsic timing, biological clocks, cell division counting, and other mechanisms control the growth and division of cells - evolution, or design ? Wed Nov 07, 2018 2:37 am

“A person's right and left legs almost always end up the same length, and the hearts of mice and elephants each fit the proper rib cage. How genes set limits on cell size and number continues to mystify.” 4 One of the remaining fundamental mysteries in biology is how organs and organisms were programmed to stop growing at the right time. This cessation or near cessation of growth does not occur abruptly, but rather is the end result of a progressive decline in growth rate.

It is difficult to examine conception, the division of cells, and the transition from zygote to the fetus and not see a rigorous and meticulous series of patterns begin to emerge. If random occurrence and simple chaotic incidence had been the cause for human life, one could expect a far greater number of genetic mutations, anomalies and aberrations. The symmetry of the human body from conception to birth is overwhelming, and it is extremely unlikely that random occurrence is responsible.

A variety of genes are involved in the control of cell growth and division. The cell cycle is the cell’s way of replicating itself in an organized, step-by-step fashion. This cycle of duplication and division, known as the cell cycle, is the essential mechanism by which all living things reproduce. The duplication of eukaryotic cells is an all fine-tuned biochemical processes that depend on the precise structural arrangement of the cellular components. The only way to make a new cell is to duplicate a cell that already exists. Tight regulation of this process ensures that a dividing cell’s DNA is copied properly, any errors in the DNA are repaired, and each daughter cell receives a full set of chromosomes. The cycle has checkpoints (also called restriction points), which allow certain genes to check for problems and halt the cycle for repairs if something goes wrong. A minimal number of Cell-cycle regulators are required, which makes them irreducibly complex. Why would a prebiotic soup, or, let's suppose, life began with simple cells which divide by fission, produce any of these regulators without the others, if by themselves, without the others, there is no function for them?

If a cell has an error in its DNA that cannot be repaired, it may undergo programmed cell death (apoptosis). Apoptosis is a common process throughout life that helps the body get rid of cells it doesn’t need. Cells that undergo apoptosis break apart. Apoptosis is a tightly regulated process – controlled by the integration of multiple pro-and anti-apoptotic signals. Ultimately the induction of apoptosis occurs through the activation of the caspase proteases that are responsible for coordinating the hallmarks of an apoptotic death:  cell shrinkage, chromatin condensation, membrane blebbing and DNA fragmentation. Bad things happen when apoptotic pathways are disrupted. A shut down of the pathway through mutation allows for growth of cancer and neurological disorders

Apoptosis, or Programmed Cell Death, is key to multicellular life and multicellular computing. Orchestrated apoptosis helps the growing embryo to sculpt many aspects of its final form. It is also a part of normal "maintenance." Every year the average human loses perhaps half of his/her body weight in cells via apoptosis! Apoptosis also protects the organism from "rogue" cells because such cells self-destruct when their internal mechanisms go wrong unless the apoptosis mechanism itself is compromised, as happens in the development of cancer. 1 Because apoptosis is so crucial to the growth and survival of multicellular organisms, it is carefully intertwined with other three multicellular principles. In other words, computing will adopt eventually in the future architectures similar to multicellular
biological organisms.

The four biological principles - specialization, messaging, stigmergy and apoptosis - had to emerge together since they depend upon each other.  Interdependence is a hallmark of intelligent design. 2

Multicellular computing adopts these four major organizing principles of multicellular biological systems because they help tame the spiralling problems of complexity and out-of-control interactions in the Internet.
Human-made computer networks are far behind multicellular biological networks - a computer virus is able to affect millions of computers, an attack a few years ago is an example, where millions of computers were blocked, and the owners had to pay to get their operational system back. In life, when a cell drives havoc, it is isolated and self-destructs. The whole organism is not affected.  Multicellular computing is biomimetics at its best, and the WWW is moving forward to get close to what High-tech computer networks in cells and brain neuronal networks do. Apoptosis-like mechanisms will eventually be developed, to shut down or disconnect computers infected by viruses. Computer science can learn a lot from computing and signalling networks in multicellular organisms. 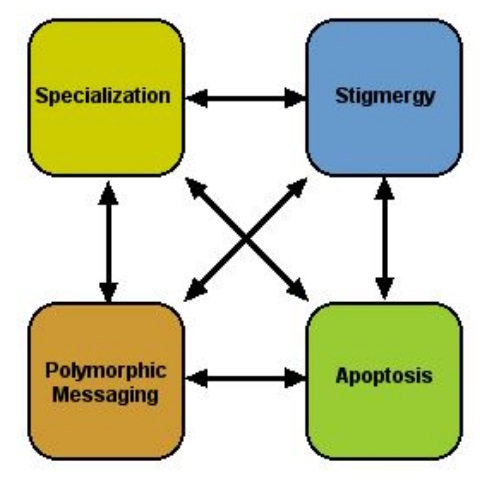 Each cell participates simultaneously in all four principles
Specialization - All healthy Metazoan cells are specialized. Even adult stem cells are somewhat specialized. What is perhaps the most specialized aspect of the cells, other than their unique shape and function, is their unique repertoire of message receptors that determine the set of message molecules to which they can respond. They all share common behaviours too. Included in the common behaviour are participation in the cues and signals of their stigmergy relationship with the rest of the body, and obedience to apoptosis messages. In other words, multicellular organisms are characterized by specialized behaviours,  appropriate messaging, stigmergy and apoptosis behaviours.

Polymorphic Messaging - Complex messenger proteins often act as "bundles" of messages. That is, one messenger protein may have separate domains, each with a different messaging function. And often, the different message domains address each of the other three architectural principles. For example, one domain initiates signal cascades specific to the unique specialized function of that type of cell, another domain on the same complex molecular messenger facilitates or verifies physical attachment to the extracellular matrix (i.e., deals explicitly with the stigmergy structure), and yet another provides signals that either suppress or encourage apoptosis! The existence of these multi-part messages shows how fundamental these principles are. A single multi-part message speaks to the functional relationship of the cell to the whole organism/tissue/organ rather than to just a single cell function.

Question: Does that indicate its origin in a stepwise, evolutionary fashion, or intelligent setup and implementation?

Stigmergy - Virtually all cells other than simple red blood cells that lack a nucleus and most organelles are affected by stigmergy cues and/or signals. Even unattached cells such as other blood and lymph born cells are affected by and affect blood borne stigmergy signals, e.g. hormones. Cells that are attached to the Extracellular Matrix (ECM), i.e., the stigmergy structure, leave long-lasting cues (persistent messages) in those structures that affect other cells. In turn, the cells respond to such cues in ways that may cause them to modify the physical structures; that's how the structures are built in the first place. Cells that are normally attached or in direct contact with the ECM require constant feedback from the ECM. Absent the appropriate attachment cues, they suicide (undergo apoptosis).

Apoptosis - Almost all cells except cancerous cells participate in apoptosis signalling all the time. Even very simple cells such as red blood cells that lack a nucleus can undergo apoptosis.

Body growth in animals is rapid in early life but then progressively slows, thus imposing a limit on adult body size. This growth deceleration in mammals is caused by potent suppression of cell proliferation in multiple tissues and is driven primarily by local, rather than systemic, mechanisms. 4  This progressive decline in proliferation results from a GENETIC PROGRAM that occurs in multiple organs and involves the down-regulation of a large set of growth-promoting genes. The limit on adult body size is imposed by a negative feedback loop. Different organs appear to use different types of information to precisely target their adult size. Organ size appears to be limited by the initial number of progenitor cells, suggesting a mechanism based on cell-cycle counting. Growth disorders result in the unrestrained growth of cancer. Growth of different organs and structures is coordinated temporally and conditionally to maintain proportionality of these body parts. Coordinated growth of different organs is that body growth is orchestrated by a hormonal or other systemic mechanisms. Biological clocks allow the body to grow for a defined period of time before slowing, thus achieving a certain size. Such timing mechanisms may be employed during embryonic development in certain cell types. Time, rather than the number of cell divisions, signals the start of differentiation, indicating the presence of a cell-intrinsic timing mechanism. Furthermore, other, even more complex regulatory mechanisms that consist of multiple components with overlapping functions guarantee that defects in one component do not totally abolish the timing function. In some developmental systems, growth appears to be limited by a cell-division counter. During the early development of Xenopus laevis, a counting mechanism is in place to ensure that the zygote divides exactly 12 times before cell division slows.