Defending the Christian Worlview, Creationism, and Intelligent Design » Origin of life » Synthesis of Coenzyme A

Synthesis of Coenzyme A

The physiology and habitat of the last universal common ancestor
SEPTEMBER 2016
Among 286,514 protein clusters, we identified 355 protein families (∼0.1%) that trace to LUCA by phylogenetic criteria. Because these proteins are not universally distributed, they can shed light on LUCA’s physiology. Their functions, properties and prosthetic groups depict LUCA as anaerobic, CO2-fixing, H2-dependent with a Wood–Ljungdahl pathway, N2-fixing and thermophilic. LUCA’s biochemistry was replete with FeS clusters and radical reaction mechanisms. Its cofactors reveal dependence upon transition metals, flavins, S-adenosyl methionine, coenzyme A, ferredoxin, molybdopterin, corrins and selenium. Its genetic code required nucleoside modifications and S-adenosyl methionine-dependent methylations  3

Coenzyme A is naturally synthesized from pantothenate (vitamin B5), which is found in food such as meat, vegetables, cereal grains, legumes, eggs, and milk. In humans and most living organisms, pantothenate is an essential vitamin that has a variety of functions. In some plants and bacteria, including Escherichia coli, pantothenate can be synthesised de novo and is therefore not considered essential. These bacteria synthesize pantothenate from the amino acid aspartate and a metabolite in valine biosynthesis. 1

In all living organisms, coenzyme A is synthesized in a five-step process that requires four molecules of ATP, pantothenate and cysteine: (see Figure) 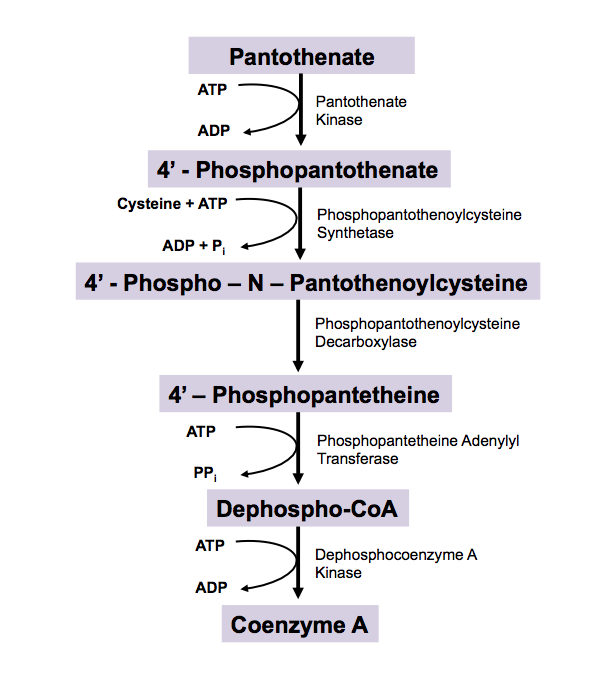 Enzyme nomenclature abbreviations in parentheses represent eukaryotic and prokaryotic enzymes respectively. This pathway is regulated by product inhibition. CoA is a competitive inhibitor for Pantothenate Kinase, which normally binds ATP. Coenzyme A, three ADP, one monophosphate, and one diphosphate are harvested from biosynthesis. New research shows that coenzyme A can be synthesized through alternate routes when intracellular coenzyme A level are reduced and the de novo pathway is impaired. In these pathways, coenzyme A needs to be provided from an external source, such as food, in order to produce 4′-phosphopantetheine. Ectonucleotide pyrophosphates (ENPP) degrade coenzyme A to 4′-phosphopantetheine, a stable molecule in organisms. Acyl carrier proteins (ACP) (such as ACP synthase and ACP degradation) are also used to produce 4′-phosphopantetheine. This pathways allows for 4′-phosphopantetheine to be replenished in the cell and allows for the conversion to coenzyme A through enzymes, PPAT and PPCK.

Type III Pantothenate Kinase: Insight into the Mechanism of an Essential Coenzyme A Biosynthetic Enzyme Universally Distributed in Bacteria 2
22 May 2006
Pantothenate kinase (PanK) catalyzes the first step in the five-step universal pathway of coenzyme A (CoA) biosynthesis, a key transformation that generally also regulates the intracellular concentration of CoA through
feedback inhibition. Type III PanK, or PanK-III, is widely distributed in the bacterial kingdom. Here we report the first crystal structure of a type III PanK, the enzyme from Thermotoga maritima (PanKTm), solved at 2.0-Å resolution. The structure of PanKTm reveals that type III PanKs belong to the acetate and sugar kinase/heat shock protein 70/actin (ASKHA) protein superfamily and that they retain the highly conserved active site motifs common to
all members of this superfamily. Comparative structural analysis of the PanKTm active site configuration and mutagenesis of three highly conserved active site aspartates identify these residues as critical for PanK-III catalysis. Furthermore, the analysis also provides an explanation for the lack of CoA feedback inhibition by the enzyme. Since PanK-III adopts a different structural fold from that of the E. coli PanK—which is a member
of the “P-loop kinase”superfamily—this finding represents yet another example of convergent evolution of the same biological function from a different protein ancestor.

Defending the Christian Worlview, Creationism, and Intelligent Design » Origin of life » Synthesis of Coenzyme A