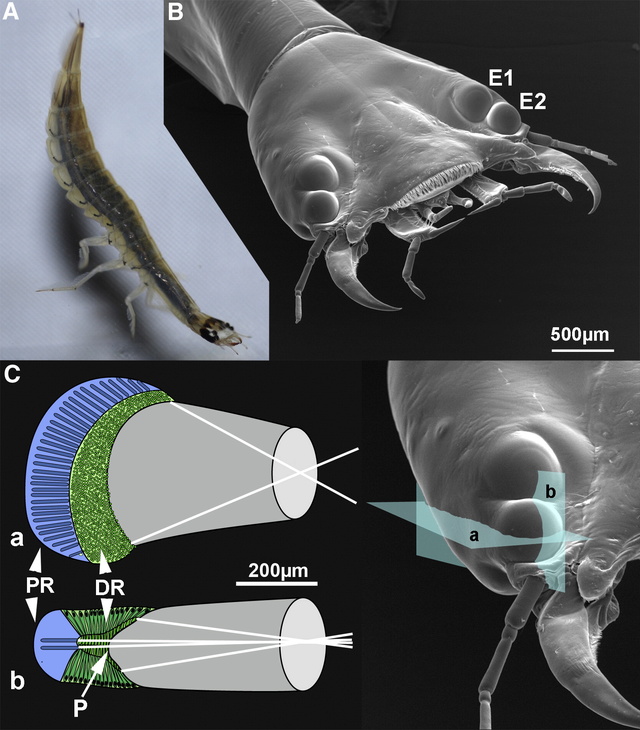 Take a close look at this organism—a very close look. Now answer these questions: Are you an evolutionist? Was this bug created by random mutations? Is it a Lucretian concoction? For evolutionists the answer is yes, all organisms must be such concoctions, and in so saying they are their own accuser—this is not about science.

And the retorts of evolutionists make matters worse. This indictment, they exclaim, is nothing but an argument from incredulity. Evolutionists have so twisted science that in their minds anything goes so long as it adheres to their religious dictates, and skepticism of their bizarre dogma becomes the enemy.

And then there is the complaint that those mutations really aren’t random. So the mutations knew what to design? Of course not, but, but …

But what? Of course the mutations are random with respect to the design. And that is the issue at hand.

Or there is the retort that natural selection remedies all. Those mutations aren’t random at all, they have been selected by a reproductive differential. But of course this after the fact selection does not dictate which mutations should occur. All selection does is kill off the useless mutations. The fact that most mutations don’t work doesn’t help matters as evolutionists imagine, it just reduces the chances of evolution’s miracle stories. The mutations are still random, there are simply fewer (far fewer) of them to work with because most don’t survive.

There’s no magic here that is going to pull amazing designs, such as this insect, out of the Darwinian hat. But to try to convince themselves of their foolish ideas evolutionists tell each other that natural selection creates these biological marvels.

In this case, it is not only a phenomenally complex insect, it is a bug with bifocals:


University of Cincinnati researchers are reporting on the discovery of a bug with bifocals -- such an amazing finding that it initially had the researchers questioning whether they could believe their own eyes.

"To the best of our knowledge, this is the first demonstration of truly bifocal lenses in the extant animal kingdom," the researchers state …

But evolutionary theory was supposed to be the only legitimate way to do science. Didn’t all of biology just happen to arise on its own?


The article explains that using two retinas and two distinct focal planes that are substantially separated, the larvae can more efficiently use these bifocals, compared with the glasses that humans wear, to switch their vision from up-close to distance -- the better to see and catch their prey, with their favorite food being mosquito larvae.

"In addition, we think that within the principle eyes, separate images of the same object could be focused on each of the two retinas, allowing each eye to function as 'two eyes in one,'" the researchers reveal in the article. The tubular-shaped eyes with the bifocals allow them to efficiently focus onto their two retinas, says Annette Stowasser, a UC biology doctoral student and first author on the paper.

Two eyes in one, that is incredible. Natural selection surely must have amazing powers. In fact such a concept could lead to new imaging breakthroughs:


"We're hoping this discovery could hold implications for humans, pending possible future research in biomedical engineering," Buschbeck says. "The discovery could also have uses for any imaging technology," adds Stowasser.

But in fact evolutionary theory contributes little to such findings:


As the researchers zeroed in on how the multiple eyes of this insect worked, they did even more research to try to disprove what they saw. They first used a microscope to look through the lenses of the two eyes detailed in the research article. They saw how the lens could make a second image grow sharper -- something that could only happen with a bifocal. "It was my first research project, and I seriously thought I made a mistake, and then we did additional research to try to kill the hypothesis," says Stowasser. However, their findings were confirmed with more research in addition to observing the operation of the lens and the two focal planes via a microscope. They saw the bifocal again when they used a method to project a narrow light beam through the lens. "Our findings can only be explained by a truly bifocal lens," write the researchers.

Such stories abound in science. The life sciences are full of such design marvels. Yet evolutionary dogma is completely unaffected. Indeed, evolutionists insist that evolution must be true—a fact every bit as much as the fact that the earth is round, that the planets circle the sun, or even gravity. Yes, there must be no question about evolution. Religion drives science, and it matters.

Almost all animal eyes follow a few, relatively well-understood functional plans. Only rarely do researchers discover an eye that diverges fundamentally from known types. The principal eye E2 of sunburst diving beetle (Thermonectus marmoratus) larvae clearly falls into the rarer category. On the basis of two different tests, we here report that it has truly bifocal lenses, something that has been previously suggested only for certain trilobites [1]. Our evidence comes from (1) the relative contrast in images of a square wave grating and (2) the refraction of a narrow laser beam projected through the lens. T. marmoratus larvae have two retinas at different depths behind the lens, and these are situated so that each can receive its own focused image. This is consistent with a novel eye organization that possibly comprises “two eyes in one.” Moreover, we find that in contrast to most commercial bifocal lenses, the lens of E2 exhibits asymmetry, which results in separation of the images both dorsoventrally and rostrocaudally within the layered retina. Visual contrast might thus be improved over conventional bifocal lenses because the unfocused version of one image is shifted away from the focused version of the other, an organization which could potentially be exploited in optical engineering. 2

» Amzing camouflage and mimicry
» Fish with 4 eyes
» Chiton, the mollusk with a thousand ceramic eyes
» amazing eye designs
» The glasshead barreleye fish with FOUR eyes, with 360° vision to spot prey and predators