Defending the Christian Worldview, Creationism, and Intelligent Design » The catalog of life » Chiton, the mollusk with a thousand ceramic eyes

Chiton, the mollusk with a thousand ceramic eyes

The creative power of God seems to be infinite. The biodiversity prior to Noah's flood seems to have been magnitudes larger than what we have today. And there are as well the heavenly creatures, like angels. Some with eyes distributed all over their body.

Ezekiel 10:12 Their entire bodies, including their backs, their hands and their wings, were completely full of eyes, as were their four wheels.

Some argue that these are fantasy stories. Why so?!! We have examples in the animal world, like mollusks full of eyes.

If some spiders have up to eight eyes, The prize for having the most number of eyes might belong to the chiton, a type of marine mollusk that can have up to 1000 eyes! 3 Chitons live mostly on or under rocks. They are found mainly in the shallow water near the coast, but some kinds can be found living in water 5000 feet (1524 meters) deep. The shell of a chiton consists of eight overlapping calcareous plates that are held together by a leathery girdle. They are sometimes colloquially referred to as ‘coat-of-mail’ snails due to the resemblance of their shell to a knight’s armor. When a predator is nearby, a chiton clamps down on a rock to protect its soft underbelly. Should the predator manage to pry it off from the rock it lives on, it can also curl up to defend itself just like an armadillo.

Chitons grow to a variety of sizes ranging from 0.5cm to over 30cm in length. They feed on algae, bryozoans, sponges and diatoms. Now…back to the eyes. A chiton’s eyes are found on its shell, and interestingly, are made up of aragonite, the same calcium-carbonate mineral that the shell is made of. According to experiments conducted by researchers at Harvard, MIT and the University of South Carolina, these eyes (called ocelli) are complete with a cornea, lens and a chamber that contains the photoreceptive cells that feed visual stimuli to the chiton’s nervous system. They studied a specific type of chiton known as the West Indian fuzzy chiton (Acanthopleura granulate)

While a chiton does not have crystal clear vision like humans, it is able to see a blurry and pixelated image of a 20-centimeter-long fish from 6.5 feet away.

Brooks Hays Study details mollusk with eyes built into its shell. The eyes are hard and true, with lenses that focus light on a photoreceptor-covered retina. NOV. 19, 2015 2

A new study describes a unique mollusk species with eyes installed directly in its shell. With ceramic lenses made of the same material as its shell, the Acanthopleura granulate has found a way to sidestep the trade-off that forces most mollusks to sacrifice sight for protection. Acanthopleura granulate is a species of chiton, a class of large armor-plated marine mollusks. In a new paper in the journal Science, an international team of researchers described the species' unique visual system. Unlike almost every other species, whose eyes are made of proteins, this unusual chiton uses aragonite, a mineral -- the same material its shell is made of. "[The eyes] allow the animal to monitor its environment with the protective armor shell," study author Ling Li, MIT graduate and Harvard researcher, told MIT News. "The majority of the shell is opaque, and only the eyes are transparent."

Question: How did evolution "discover" that trick to turn the shell transparent, to permit eyesight? How would a stepwise process with intermediate steps confer any advantage ?

A previous study proved the species' eyes to be true eyes, similar to human eyes, with lenses that focus light on a photoreceptor-covered retina, producing a real image. To measure the eyes' focusing potential, Li and her colleagues popped a few eyes out of the shell and put them under the microscope. The lenses themselves focus a rather crisp image, but the retinas are so small they can host but so many receptors. Each chiton eye produced a tiny pixelated image. Chitons don't need to see all that well, they just need to know if a predator is nearby. If so, they wedge themselves between rocks until the danger has passed. Researchers hope their analysis might lead to material science applications in the military and heavy industry fields, where soldiers and workers operating under hazardous conditions could benefit from heavily protected eyewear.

In adult chiton, eyes on the shell plates are eroded over time, often losing lenses and becoming non-functional. The mantle continually secretes shell at the periphery, adding new aesthetes 4

My comment: Had the regeneration process not have to be fully implemented together with the eyes, otherwise, the eyes would become non-functional very soon ?

Nature provides a multitude of examples of multifunctional structural materials in which trade-offs are imposed by conflicting functional requirements. One such example is the biomineralized armor of the chiton Acanthopleura granulata, which incorporates an integrated sensory system that includes hundreds of eyes with aragonite-based lenses. As the size, complexity, and functionality of the integrated sensory elements increase, the local mechanical performance of the armor decreases. However, A. granulata has several strategies to compensate for its mechanical vulnerabilities to form a multipurpose system with co-optimized optical and structural functions.

My comment: Reading the article, gives the impression that the description comes directly from the engineering department from a major optic lens fabrication company

The design of structural materials with additional integrated functionality, such as energy storage (1), sensing (2), and self-healing (3), is an emergent field that holds great potential for a diversity of engineering applications. Nature provides a multitude of multi-functional structural material systems, such as brittle stars (photosensation) (4), sponges (fiberoptic feature) (5, 6), limpets (photonic coloration) (7), and bivalves (optical transparency) (8, 9). Understanding the materials-level trade-offs imposed by the conflicting functional requirements of these systems is key to extracting design principles for innovative material solutions (10, 11). We investigate the multifunctional design and performance of the biomineralized armor of  chiton Acanthopleura granulata, which contains an integrated visual system. Chitons are the only known group of extant mollusks to have living tissue integrated within the outermost layer of their shells (12). This tissue forms a complex network of channels that open dorsally as sensory organs known as aesthetes.

A variety of functions have been proposed for the aesthetes, although observations of the phototactic behavior of a number of chitons suggest that photoreception may be a predominant role. In certain species, the aesthetes include hundreds of lens eyes that may be able to spatially resolve objects. In stark contrast to the protein-based lenses of most animal eyes, the lenses of chitons, like their shells, are principally composed of aragonite. Unlike the few other eyes known to contain lenses made of calcium carbonate, such as those of trilobites, the eyes of chitons are integrated within and dispersed across their entire dorsal shell surface instead of being localized to a particular region of the body. Although the calcitic lenses of brittle stars are also dispersed across their dorsal arm plates, it is unclear whether they enable spatial vision in a fashion similar to the lenses of chitons. 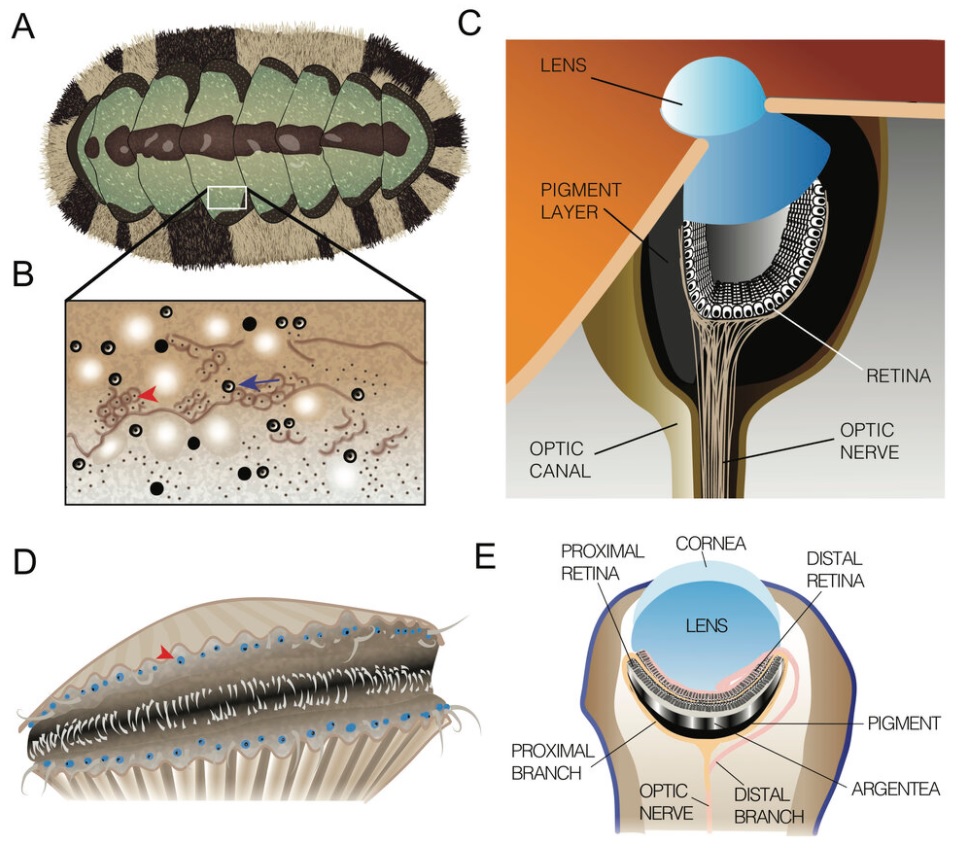 Shell eyes found in the adult chiton and scallop pallial eyes. (A) Cartoon of the polyplacophoran Acanthopleura granulata. These chiton species have hundreds of aragonite lens-containing eyes embedded in their shells. (B) Cartoon rendering of a magnified view of the chiton shell surface. Sensory pores (aesthetes) are evident in the shell surface. The blue arrow shows a lens-containing eye; the red arrowhead shows non-eye aesthetes. (C) High magnification cartoon rendering of the lens-containing eyes found in Acanthopleura. Figure based on Speiser et al. (2011). (D) Cartoon of a bay scallop with dozens of blue pallial eyes. A single eye is highlighted by a red arrowhead. (E) Cross-section of a single pallial eye. Proximal and distal retina, and corresponding axon tracts, cornea, lens, pigment cell layer and argentea (mirror) are shown. Anatomy based on Dakin (1928), Barber et al. (1967) and McReynolds and Gorman (1970). 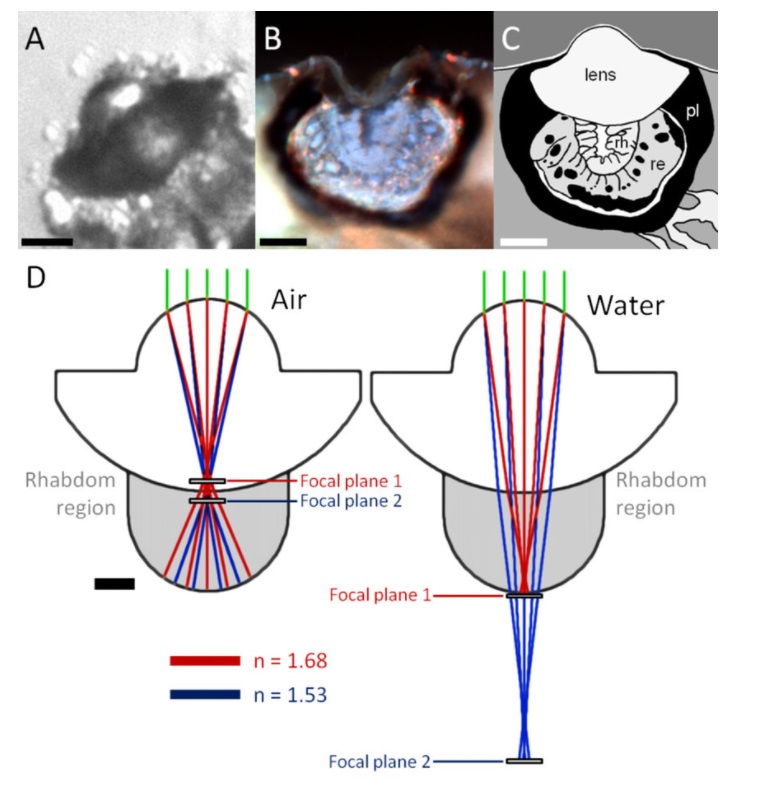 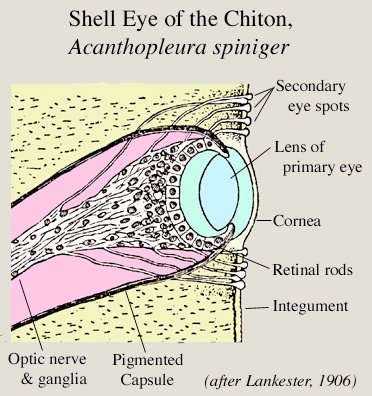 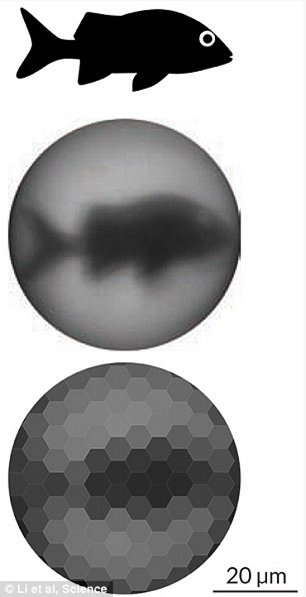 Defending the Christian Worldview, Creationism, and Intelligent Design » The catalog of life » Chiton, the mollusk with a thousand ceramic eyes