Defending the Christian Worldview, Creationism, and Intelligent Design » The catalog of life » Amzing camouflage and mimicry

Can Cuttlefish camouflage in a living room?

The balance of Dazzled and Deceived focuses on the genetics and development of mimetic patterns, as revealed mostly through work with butterflies. The problems here are huge for evolutionary biologists. How does natural selection build a complex organism with all its integrated parts through fixation of random mutations? Butterfly mimicry has been a classic arena in which to tackle this problem precisely because the gambit is so obvious: To be a good mimic of another species requires many pattern elements of bars, lines, colors, and even wing shapes to change at once. Moreover, how can this process produce females that are perfect mimics and males that look nothing of the sort within a single species?

why the female uses camouflage, but the male don't. 2. Who would certain species , like frogs, butterflies, frogs, insects , fish, birds etc. need camouflage for survival, while many of the same species, living in the same environment, don't ? why is it a mechanism found by animals of very distant philogeny ?

In search of nature’s camouflage


The cuttlefish, known as the “chameleon of the sea,” can rapidly alter both the color and pattern of its skin, helping it blend in with its surroundings and avoid predators. It uses sophisticated biomolecular nanophotonic system underlying the cuttlefish’s color-changing ways.

The cuttlefish (Sepia officinalis) is a cephalopod, like squid and octopuses. Neurally controlled, pigmented organs called chromatophores allow it to change its appearance in response to visual cues, but scientists have had an incomplete understanding of the biological, chemical, and optical functions that make this adaptive coloration possible.

To regulate its color, the cuttlefish relies on a vertically arranged assembly of three optical components: the leucophore, a near-perfect light scatterer that reflects it uniformly over the entire visible spectrum; the iridophore, a reflector containing a stack of thin films; and the chromatophore. This layering enables the skin of the animal to selectively absorb or reflect light of different colors, said coauthor Leila F. Deravi, a research associate in bioengineering at SEAS.

“Chromatophores were previously considered to be pigmentary organs that acted simply as selective color filters,” Deravi said. “But our results suggest that they play a more complex role; they contain luminescent protein nanostructures that enable the cuttlefish to make quick and elaborate changes in its skin pigmentation.”

When the cuttlefish actuates its coloration system, each chromatophore expands. The surface area can change as much as 500 percent. The Harvard-MBL team showed that within the chromatophore, tethered pigment granules regulate light through absorbance, reflection, and fluorescence, in effect functioning as nanoscale photonic elements, even as the chromatophore changes in size.

“The cuttlefish uses an ingenious approach to materials composition and structure, one that we have never employed in our engineered displays,” “It is extremely challenging for us to replicate the mechanisms that the cuttlefish uses. For example, we cannot yet engineer materials that have the elasticity to expand 500 percent in surface area.  The cuttlefish may have found a way to compensate for this change in richness of color by being an ‘active’ light emitter (fluorescent), not simply modulating light through passive reflection.”

“Cuttlefish skin is unique for its dynamic patterning and speed of change,” Hanlon said. The cuttlefish uses a tether system that connects the individual pigment granules.”

“Throughout history, people have dreamed of having an ‘invisible suit,’” Parker said. “Nature God ( lets correct that )  solved that problem, and now it’s up to us to replicate this genius, so, like the cuttlefish, we can avoid our predators.”

Admin
Posts : 6546
Join date : 2009-08-09
Age : 55
Location : Aracaju brazil
This is the Macrocilix maia. It’s the only mimic insect I am aware of that paints an entire scene. In this instance, the moth’s wings feature a mural of two flies picking at a pile of bird dropping. The detail of the scene is unmistakeable and extraordinary. 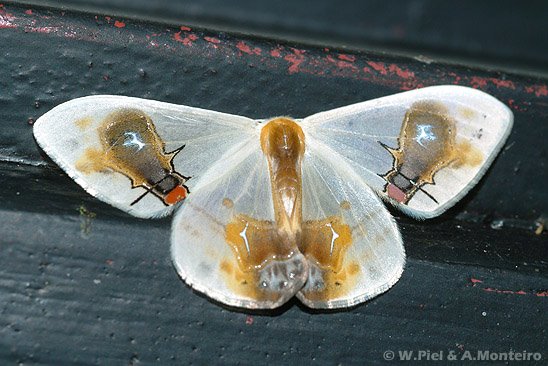 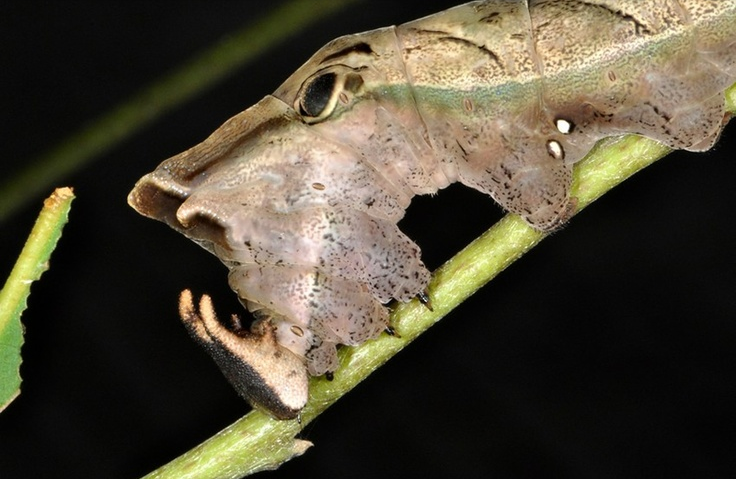 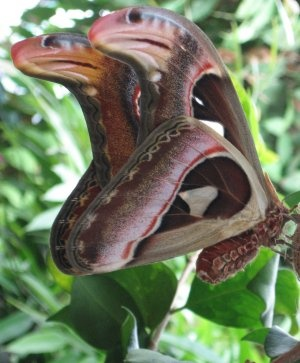 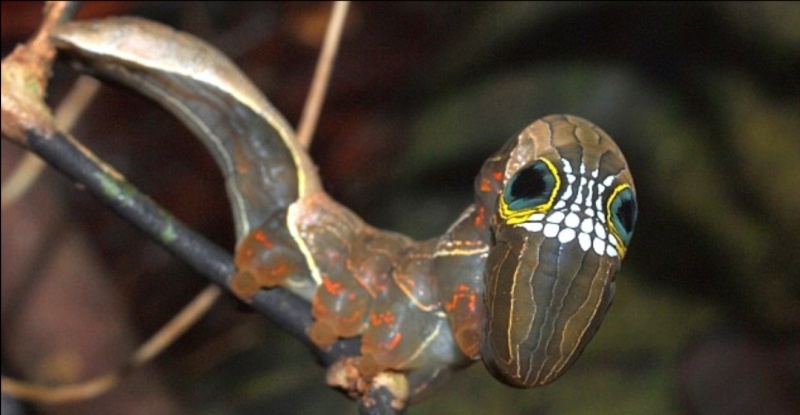 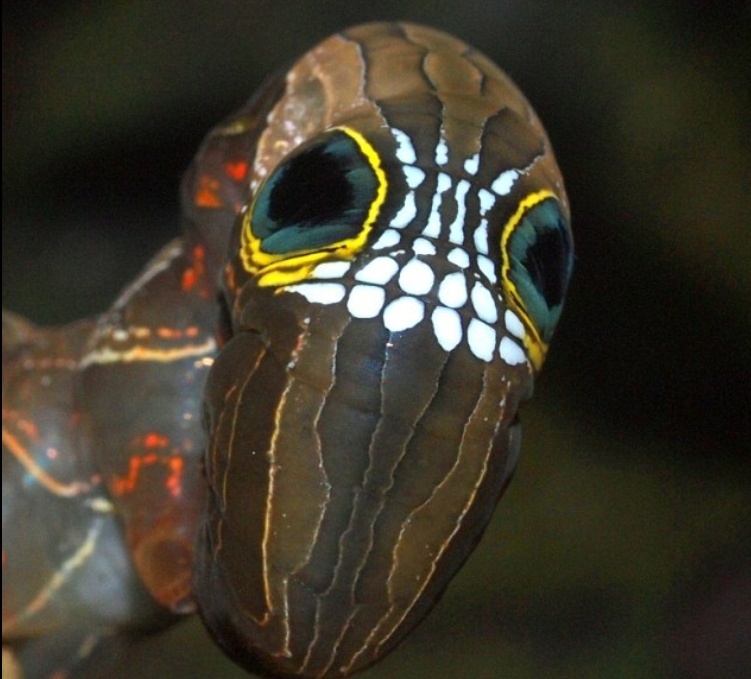 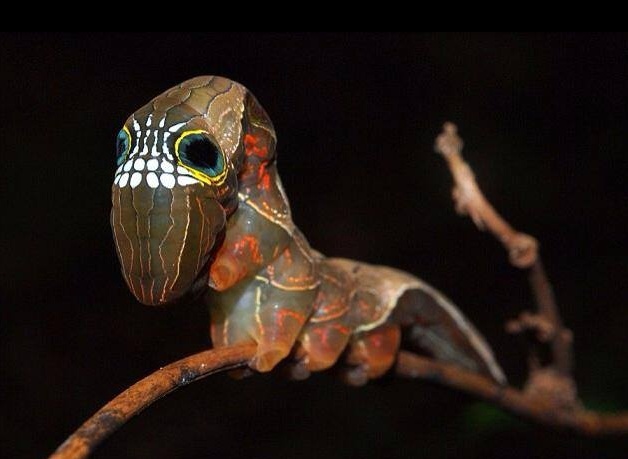 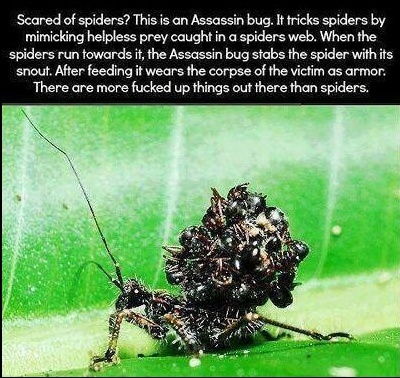 Diane once again found the highlight of the day: this Gorgonian Horned Shrimp (Periclemenes sp.). The only reference we could find of this species was in Macrolife: A Divers Guide to Underwater Malaysia. According to the authors (p.163), this species has only been identified with the gorgonians that they mimick. But at K41, the shrimp was on a whip coral, not a gorgonian.

Dragon Shrimp (Miropandalus hardingi) is also called as Gorgonian Horned Shrimp. The colour is brownish-green with white patches on tip of dorsal processes and legs. Always associated as commensal with black corals, on which it is perfectly camouflaged. 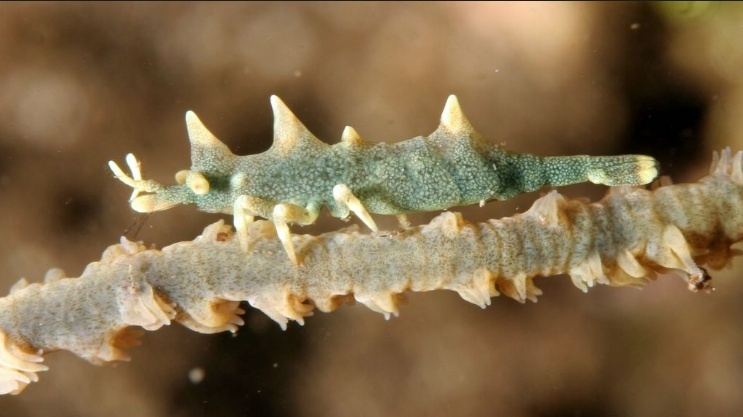 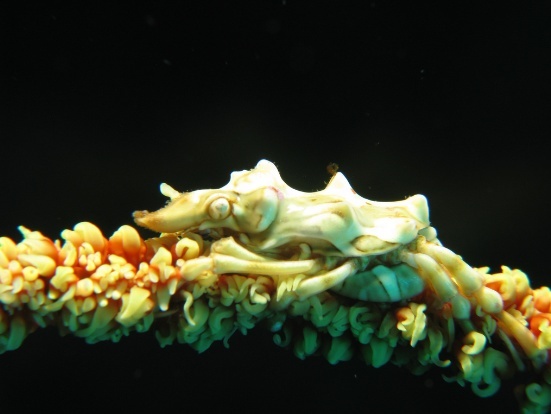 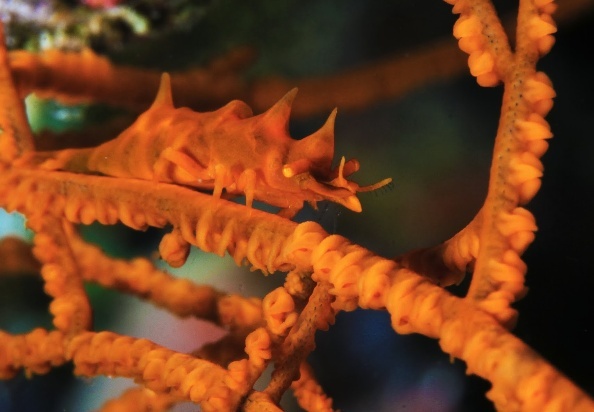 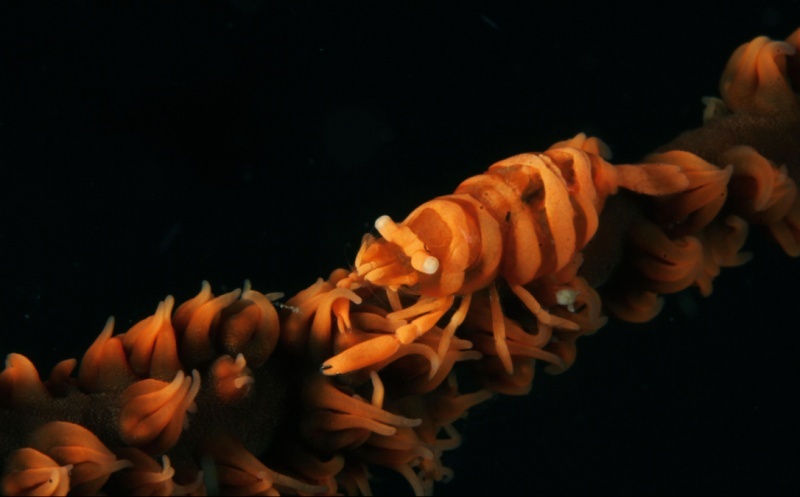 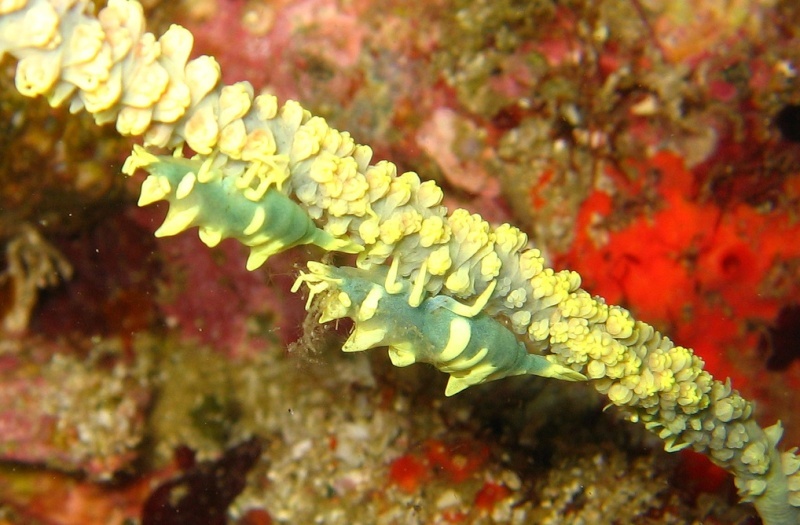 In response to predation pressure, some insects have developed spectacular plant mimicry strategies (homomorphy), involving important changes in their morphology. The fossil record of plant mimicry provides clues to the importance of predation pressure in the deep past. Surprisingly, to date, the oldest confirmed records of insect leaf mimicry are Mesozoic. Here we document a crucial step in the story of adaptive responses to predation by describing a leaf-mimicking katydid from the Middle Permian. Our morphometric analysis demonstrates that leaf-mimicking wings of katydids can be morphologically characterized in a non-arbitrary manner and shows that the new genus and species Permotettigonia gallica developed a mimicking pattern of forewings very similar to those of the modern leaf-like katydids. Our finding suggests that predation pressure was already high enough during the Permian to favour investment in leaf mimicry.

This is one more just so story that bears any scientific evidence. Evolution is simply assumed to be the mechanism to explain mimicry.


Make like a leaf:  A fossil leaf-mimicking insect said to be 47 million years old is virtually identical to modern ones, reported Mongabay.com.  What this means, according to the article, is that this insect found a “time-tested strategy” to avoid predators.  The article calls this “an outstanding example of morphological and, probably, behavioral stasis.” It means that “leaf mimicry had already evolved early in the Eocene period when insect predators would have included birds, early primates, bats, and other insects.”  See also the story on Live Science.
Update 12/29/2006: the paper in PNAS appeared online Dec. 29.2  Portions of the abstract demonstrate the degree of stasis of this fossil:


.... Here we report the first fossil leaf insect, Eophyllium messelensis gen.  et sp.  nov., from 47-million-year-old deposits at Messel in Germany.  The new specimen, a male, is exquisitely preserved and displays the same foliaceous appearance as extant male leaf insects.  Clearly, an advanced form of extant angiosperm leaf mimicry had already evolved early in the Eocene.  We infer that this trait was combined with a special behavior, catalepsy or “adaptive stillness,” enabling Eophyllium to deceive visually oriented predators.  Potential predators reported from the Eocene are birds, early primates, and bats.  The combination of primitive and derived characters revealed by Eophyllium allows the determination of its exact phylogenetic position and illuminates the evolution of leaf mimicry for this insect group.  It provides direct evidence that Phylliinae originated at least 47 Mya.... This fossil leaf insect bears considerable resemblance to extant individuals in size and cryptic morphology, indicating minimal change in 47 million years.  This absence of evolutionary change is an outstanding example of morphological and, probably, behavioral stasis.

This fossil was found in Europe, while most leaf-mimic insects live today in southeast Asia.  This indicates that leaf insects were much more widespread in the past.  It’s possible that fossil hunters missed finding them before now because the mimics were so good, people mistook them for leaves.
What traits did the authors feel were primitive?  Their paper tries to place the new fossil between the stick insects and modern leaf mimics, but admits that their origin is “poorly understood” and that “exact phylogenetic position of the Phylliinae within the phasmid phylogeny is unknown”.  It seems arbitrary, therefore, that their chart places the new insect halfway between the stick insects and the leaf insects, considering that the fossil shares many characteristics with extant leaf insects.  They only pointed to “straight fore femora and the absence of tergal thorn pads” as “primitive” traits resembling those of the stick insects; yet, clearly, this fossil was not primitive.  They restated at the end of the paper that this fossil is an example of “exceptional evolutionary stasis of a highly derived morphology, most likely coupled with very specialized cryptic behavior that lasted for [greater than or equal to] 47 million years.”
As to how exactly this morphology and behavior evolved, they suggested that necessity was the mother of invention: “In all probability,” they speculated, “this advanced type of crypsis evolved in concert with angiosperm leaves on which the insects feed.  It must have been caused by vigorous selection pressure by visually oriented predators” such as birds, lizards, bats and primates.

Do you see how the evolutionary mindset works?  The thought never enters any evolutionist’s brain that evolutionary theory could be at fault.  No matter how bizarre, conflicting and falsifying the evidence, Darwin’s image must be worshipped and the sacrifices* must continue.  It doesn’t matter that no evolution happens in some lineages for tens or hundreds of millions of years (think about that!) for them to keep the pieces of their story straight, while evolution is extremely, fantastically rapid in other quarters.  In the time tree-swinging monkeys supposedly became philosophers, and all kinds of dramatic other changes took place, leaf-mimicking insects changed nada.  Are we to believe that the predators were all so stupid in this time never to catch on to the trick?  “Don’t eat me; I’m a leaf!”  Right.
Even more astonishing is the conservation of noncoding elements between sharks and humans.  Evolutionary theory is so plastic and malleable, like silly putty, (12/14/2004), it makes evolutionists downright silly, buddy.  We are asked to believe that all the radiations of fish into seahorses and angler fish and tunas showed more evolution of these elements from their cartilaginous swimming mates than 530 million years of evolution of all the other vertebrates—reptiles, birds, and every mammal from shrews to giraffes to elephants and man.  We are expected to trust the evolutionists because they are priests of Science and know the Truth of Almighty Darwin (t.o.a.d.).  Don’t be a toady.

Re: Amzing camouflage and mimicry

Defending the Christian Worldview, Creationism, and Intelligent Design » The catalog of life » Amzing camouflage and mimicry