Origin of the blood vascular system

When and why did the cardiovascular system evolve in the first place? Why are certain blood circulatory systems open, while others are closed? Why are some systems lined by endothelium, whereas others have no cell lining? These are important questions because they provide insights into the design constraints, path dependence, trade-offs, and selective pressures that underlie human physiology and vulnerability to disease.

The number of identifiable themes or body plans (including the structural design of cardiovascular systems) is limited by developmental/genetic constraints and the laws of chemistry and physics.The first classification employs
molecular and/or morphological data to describe the evolutionary relationships among major metazoan lineages. The results, which may be represented in the form of phylogenetic trees (an example is shown in Fig. 1), can be
used to infer evolutionary histories. The deep branches on the animal tree of life remain controversial.

All unicellular and multicellular animals depend on diffusion to supply oxygen and nutrients, and to remove carbon dioxide. Diffusion, while energetically inexpensive, is a very slow process and works only over small distances. Simple multicellular organisms (diploblastic animals and some of the early triploblastic animals, such as flatworms) obtain oxygen by diffusion alone. They do so by minimizing metabolic demands, by assuming a body geometry that maximizes the surface area, by localizing most of their cells at the environment/body interface and/or by pumping external environmental water to their internal surfaces. However, these strategies have inherent design constraints that place an upper limit on body size. To achieve further 3-dimensional increases in size, it is necessary to employ internal transport and exchange systems (i.e. circulatory systems) to provide bulk flow delivery of substances (e.g. gases, nutrients, wastes) to and from each cell in the body.

When approaching the evolutionary origins of the blood vascular system and the endothelium, we must consider three important questions. First, when did these systems evolve? Second, why did they evolve? In other words,
what survival advantage do these structures confer at the level of species? Finally, how did the blood vessels and their endothelial linings develop ontogenetically (as evolutionary novelties) in the first place? In this section, we will consider each question in turn. 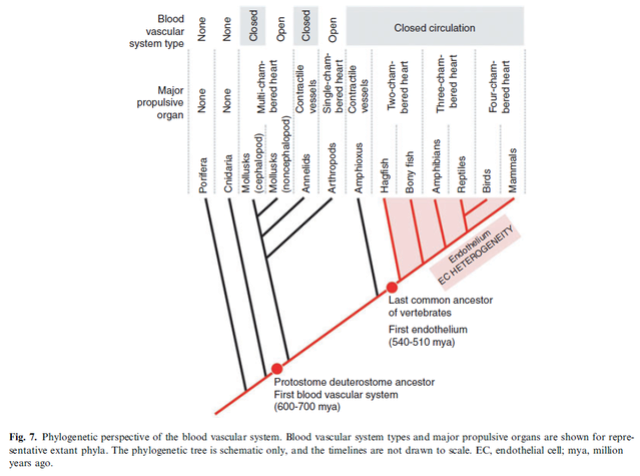 Some are closed, others are open. Some use hearts to propel blood, whereas others employ pulsatile blood vessels. Only a minority are lined by endothelium. When and how did all of these diverse structures evolve? The answer is likely through a combination of homology and convergence. The last common ancestor of vertebrates and annelids, or of vertebrates and mollusks was the ancestor of the protostome–deuterostome ancestor, which lived between 600 and 700 million years ago.

The Ediacaran emergence of bilaterians: congruence between the genetic and the geological fossil records 2

Unravelling the timing of the metazoan radiation is crucial for elucidating the macroevolutionary processes associated with the Cambrian explosion. Because estimates of metazoan divergence times derived from molecular clocks range from quite shallow (Ediacaran) to very deep (Mesoproterozoic), it has been difficult to ascertain whether there is concordance or quite dramatic discordance between the genetic and geological fossil records.

So basically, the dating is guesswork !

Here, we show using a range of molecular clock methods that the major pulse of metazoan divergence times was during the Ediacaran, which is consistent with a synoptic reading of the Ediacaran macrobiota. Therefore, the two historical records of life both suggest that although the cradle of Metazoa lies in the Cryogenian, and despite the explosion of ecology that occurs in the Cambrian, it is the emergence of bilaterian taxa in the Ediacaran that sets the tempo and mode of macroevolution for the remainder of geological time.  The genetic fossil record strongly supports the notion that the diversification of metazoans in general, and bilaterian metazoans in particular, occurred during the Ediacaran Period, 635–542 Myr ago (Knoll et al. 2004, 2006). 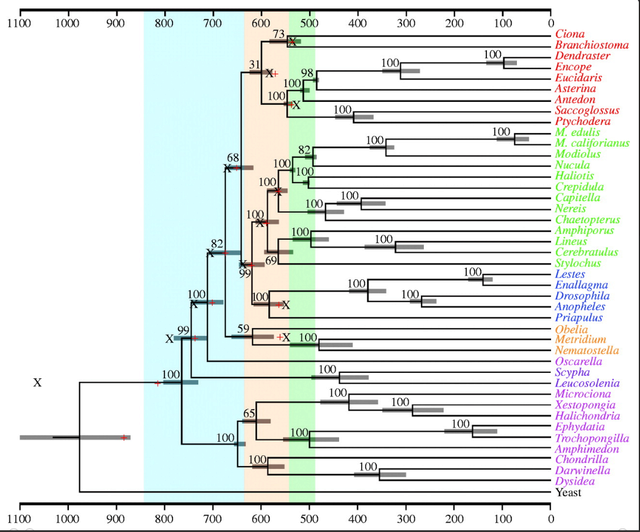 The timing of the metazoan radiation according to the molecular clock.
The phylogenetic tree for 41 metazoan taxa rooted on the yeast Saccharomyces cerevisiae as determined by Bayesian phylogenetic analysis (see text) is shown. The deuterostomes are shown in red, spiralian protostomes in green, ecdysozoan protostomes in blue, cnidarians in orange, the homoscleromorph Oscarella in salmon pink, calcisponges in purple and demosponges in magenta. The nodes of the tree are positioned according to the optimum as determined from the Bayesian autocorrelated method of Thorne et al. (1998), as implemented in the software package ‘Multidivtime’ (Thorne & Kishino 2002) using a root prior of 1000 Myr ago (s.d.=500 Myr ago). The 95% HPD credibility intervals are shown in brackets. The red crosses are the estimates for clades with internal calibration points as determined by Bayesian algorithm Beast (Drummond et al. 2006) using uniform priors and an exponential rate distribution; black Xs are the estimates using exponential priors and the same rate distribution. Note that much of the metazoan diversification occurs during the Ediacaran (brown), which lies between the Cryogenian (ice blue) and the Cambrian (green).

Although the fossil record is scarce, it is widely believed that this precursor animal was a segmented bilaterian (triploblastic coelomate). If we are to accept that the blood vascular system evolved as a means to bypass the bulkheads of a segmented animal (see next section), then the first such system likely arose during this time. Flow would have been mediated by peristaltic vessels, perhaps like those described in the annelid. Blood probably percolated through spaces in the extracellular matrix, and thus, the system was by definition closed, albeit primitive. This scenario supports homology of all blood vascular systems. Over the past 600–700 million years of evolution, the blood vascular system has undergone significant modifications, in response to selective pressures experienced by individual phyla.

Why did the blood vascular system and endothelium evolve?
Circulatory systems most certainly evolved to overcome the time and distance constraints of diffusion, thus permitting increased body size and metabolic rates, as well as increased levels of integration and organization in Metazoa. 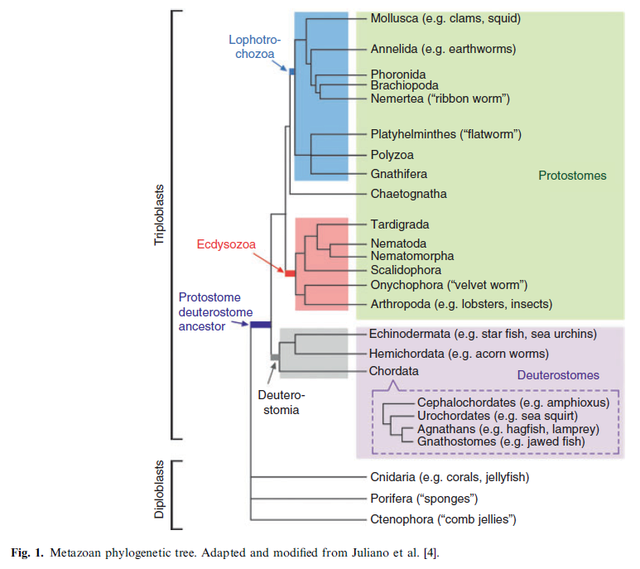 How did the blood vascular system and endothelium evolve?
The coelomic and blood vascular systems (as well as excretory systems) arose within the mesoderm of triploblastic animals. Indeed, the appearance of the mesoderm provided new building material for animal construction and allowed for the evolution of increasingly complex and large animals. At some early evolutionary stage, perhaps in the ancestral triploblastic bilaterian condition, a subpopulation of mesodermal cells differentiated into a
mesothelium whose apical side faced the coelom and whose basal side faced clefts (i.e. blood vessels) between the mesothelial walls.

The problem of all these explanations is that they are pure speculation, without any hard evidence whatsoever to back up the claims.