Defending the Christian Worlview, Creationism, and Intelligent Design » Philosophy and God » Atheism » Why do atheists try to justify their unbelief in God ?

Why do atheists try to justify their unbelief in God ? 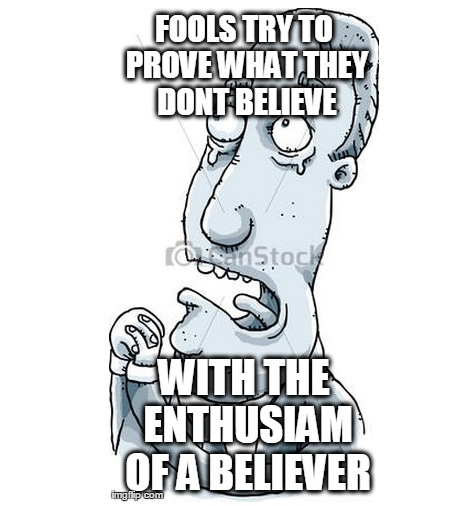 Why do atheists all the time ask for empirical proofs for Gods existence ? If you lack belief in a deity, yet spend tons of time debating people who DO believe in God and seeking to shoot holes in their  beliefs, does this mean they  are seeking to find God in a roundabout way (desiring to be persuaded)? Or does it mean that they think they are justifying in their non-belief  and making themself feel better and more warranted / justified to disbelieve in God by shooting down the believers in a creator ? 1

A common argument is that there is no evidence or proof for Gods existence, and what cannot be backed up with evidence, can be dismissed without evidence.
Whatever couldn’t be proven or disproven was in the  “realm of fiction or hallucinations.... . But why the demand that proponents of intelligent design / creationism must produce empirical conclusive proofs for Gods existence, as if that is the be-all and end-all of all epistemological inquiry? Often, when i ask atheists, what evidence would convince them that design explains best the origin of what is observed in the natural world, they give no answer. Truth said, most of them never thought about the question. What would they consider good or compelling evidence and how would they define what is evidence of design in nature ? The question they must answer is : “what evidence would you find compelling?”

There is a huge body of work from many serious thinkers arguing the theistic God; there is no such body of work painstakingly arguing in favor of Santa Claus (i.e., the mythical figure), the tooth fairy, leprechauns, unicorns, mermaids. That’s why the theistic claim is a lot more credible.

It is much more plausible that the universe came about by the causal agency of God than by self-causation or random chance. We should accept the claims by virtue of the demands of rationality and plausibility, by which we also determine whether anything else is true.

Its pointless to ask for proofs. Thats on the lowest level of a atheism - theism debate, reserved to the ones that have no education in philosophy and science.

Defending the Christian Worlview, Creationism, and Intelligent Design » Philosophy and God » Atheism » Why do atheists try to justify their unbelief in God ?