Defending the Christian Worlview, Creationism, and Intelligent Design » Photosynthesis, Protozoans,Plants and Bacterias » Bacteria Use Sophisticated Language, and work in teams

Bacteria Use Sophisticated Language, and work in teams 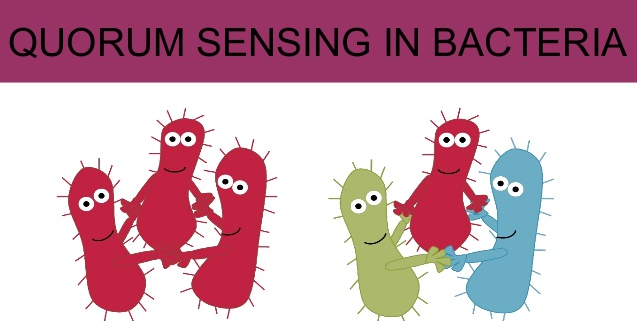 Bacteria are the most abundant kind of cells. Most things bacteria do, other kinds of cells do, too. Our knowledge of bacteria forms the foundation for understanding all forms of life. Across the vast kingdoms of life on Earth, bacteria’s linguistic skills are second only to humans’—and in some ways they’re superior. In her TED talk, Dr. Bassler goes on to describe how bacteria send out very small molecules, which form “words” for communication. Each molecule in the chain acts as a letter in the word. Different words form commands or requests, which are understood by their neighbors. Each molecule in the chain acts as a letter in the word (400, 604). Günther Witzany, a German philosopher of biology (407), also explains that bacteria interpret signals based not just on the chemistry but on the context of the situation. Bonnie Bassler also described bacterial communication as linguistic (401). Moreover, bacteria have molecular words for “me,” “you,” “us,” and “them.” They know and describe the difference between themselves and others. They sense how many of their own species and how many of another exist in any population. And they speak multiple languages—a native language for their own species, and foreign languages for other species.

To conduct intraspecies conversations, a bacterium has a special receptor that only accepts molecules from the bacterium they’re conversing with. Dr. Bassler reports that “each molecule fits into its partner receptor and no other. So these are private, secret conversations” (604).* But alongside this, bacteria have a second, generic receptor that emits a different molecule and allows them to communicate with members of different species of bacteria. Dr. Bassler describes this as “bacterial Esperanto,” a language constructed for universal communication. She says bacteria will make decisions based on which species is in the majority and minority of any given population (604). As the paper “Bacterial Linguistic Communication and Social Intelligence” (401) points out, “Bacterial chemical conversations also include assignment of contextual meaning to words and sentences (semantic) and conduction of dialogue (pragmatic)—the fundamental aspects of linguistic communication.”

This capacity for communication makes bacteria social creatures (513), and, as it turns out, democratic ones as well. Dr. Bassler says, “They make chemical words, they recognize those words, and they turn on group behaviors that are only successful when all of the cells participate in unison. We have a fancy name for this; we call it ‘Quorum Sensing.’ They vote with these chemical votes, the vote gets counted, and then everybody responds to the vote” (604). Apparently, the practice of casting votes wasn’t invented by Benjamin Franklin or the Greeks. It was invented by bacteria! I used to think of bacteria as “lone rangers.” But seldom do bacteria float around all by themselves groping for something to eat. They live together in colonies with assigned roles and allegiance to the group. They behave much like ants or bees (502, 513). They greet each other when they meet, they hunt for food together, and they pool their digestive enzymes (522). They prey on other bacterial colonies by surrounding them, digesting them, and splitting the booty (much as human armies do). Martin Dworkin, a preeminent scholar in microbiology at the University of Minnesota (524), said, “In the presence of clumps of prey bacteria, swarms of M. xanthus would frequently turn sharply, head directly for that clump, and then linger there as if at a banquet.” He called it “the microbial wolf-pack effect.” He also showed how bacteria can detect and migrate toward glass beads, but won’t stay and eat as they do after locating a clump of prey bacteria (504). Certain kinds of cyanobacteria called Anabaena divide labor by forming cells called heterocysts. When deprived of nitrogen, they genetically reengineer their genomes to form an enzyme that extracts single nitrogen atoms from the air (507). In other words, division of labor wasn’t invented by Henry Ford or Adam Smith or ancient tribesmen—it was invented by bacteria. When bacteria want to attack you and make you sick, they don’t just hack their way into your system and try to take over. Any one bacterium is far too small and helpless to pull this off.

Rather, they wait until they have built up to a sizable population. They begin signaling each other and when they estimate they’ve reached a critical mass, they launch an organized attack (516). A paper in Nature (514) by Iñigo Martincorena, a fellow at the Sanger Institute, and colleagues reports that mutation rates vary widely from one place in the genome to another. Factors we don’t yet understand influence mutation rate of cells, and mutations maximize the chances of survival. These findings contradict the current popular belief that mutations occur regardless of their ability to help the organism survive. So cells direct their own evolution. They also monitor their genomes to find and fix mistakes. Which brings us to the next surprise.


The Remarkable Language of Cells

I was recently directed to a video lecture on the phenomenon of quorum sensing, the mechanism by which bacteria communicate with one another to establish the population density of micro-organisms of their own kind within their proximal environment. Bonnie Bassler, the lecturer in this video, does a masterful job of portraying fairly technical concepts and ideas to a lay-audience.

The purpose of quorum sensing is essentially to ensure that sufficient cell numbers of a given species are present before initiating a response that requires the population density to be above a certain threshold. A single bacterial cell secreting a toxin into a eukaryotic organism is not likely to do the host any harm and would waste resources. If, however, all of the bacterial cells in a large population co-ordinate the expression of the toxin, the toxin is more likely to have the desired effect.

Each species that employs quorum sensing -- which includes most gram negative bacteria, and also some gram positive bacteria -- synthesises a tiny signalling molecule (technically called an "autoinducer"), which diffuses freely across the cell's membrane. Autoinducers are species-specific, which means that each cell of the same species makes the same molecule. This means that the autoinducer is only present in high concentrations inside the cell when there are many cells of the same species nearby. Inside the cell, the autoinducer binds to an activator protein which is specific for that particular molecule and thus signals the bacteria to begin transcription of specific genes. As noted in the video, there is also evidence of a common autoinducer which is shared between many species of bacteria as a "conventional language."

The embedded video discusses the elucidation of this process and its application in regulating light emission in bioluminescent bacteria (in this case, the marine bacterium Aliivibro fischeri). The light results from the action of the enzyme, luciferase (so aptly named!). An activator protein, called LuxR, is responsible for controlling the lux operons, which are in turn responsible for the transcription of the proteins required for luminescence. These operons are induced when the concentration of the autoinducer specific to Aliivibro fischeri reaches a high enough concentration. This autoinducer is itself synthesised by the enzyme which is encoded by the luxI gene.

Quorum sensing is very wide spread, particularly in gram negative bacteria. Pseudomonas aeruginosa, for example, uses such "population sampling" processes to trigger the expression of a significant number of unrelated genes when the population density reaches a certain threshold. These genes subsequently allow the cells to form a biofilm (which increases the pathogenicity of the organism and prevents the penetration of antibiotics).

What is especially striking about quorum sensing is the species-specificity of the autoinducer, as well as the more common language convention. And one wonders -- naturally -- what kind of Darwinian process may have led to its arisal. We are only beginning to scale the foothills of multicellular developmental biology. But there is also evidence that similar processes of cell-cell signalling are at work in higher taxa in influencing how cells work together and co-operate as part of an interconnected unit.

Is it an over-statement to say that information runs the show in Biology?

Bacteria demonstrate intra-species communication that is species specific using a partner with a communication molecule. Bacteria are also “multilingual” with a generic trade language for interspecies communication. Bacteria control tasks by signal producing and receiving receptors with a signal carrier. The tasks bacteria conduct depend on the concentration they sense of self bacteria versus generic species concentration. e.g. Bacteria control pathogenicity with quorum sensing. The detailed (small) sRNA required for these control mechanisms is now beginning to be desciphered. See below. Question:

Did bacteria “invent” their communication and control methods via evolutionary stochastic processes?
Or do these constitute Complex Specified Information and thus evidence design?

Quorum sensing is a chemical communication process that bacteria use to control collective behaviours including bioluminescence, biofilm formation, and virulence factor production. In Vibrio harveyi, five homologous small RNAs (sRNAs) called Qrr1–5, control quorum-sensing transitions. Here, we identify 16 new targets of the Qrr sRNAs. Mutagenesis reveals that particular sequence differences among the Qrr sRNAs determine their target specificities. Modelling coupled with biochemical and genetic analyses show that all five of the Qrr sRNAs possess four stem-loops: the first stem-loop is crucial for base pairing with a subset of targets. This stem-loop also protects the Qrr sRNAs from RNase E-mediated degradation. The second stem-loop contains conserved sequences required for base pairing with the majority of the target mRNAs. The third stem-loop plays an accessory role in base pairing and stability. The fourth stem-loop functions as a rho-independent terminator. In the quorum-sensing regulon, Qrr sRNAs-controlled genes are the most rapid to respond to quorum-sensing autoinducers. The Qrr sRNAs are conserved throughout vibrios, thus insights from this work could apply generally to Vibrio quorum sensing.

For a popular discussion see the TED presentation: How bacteria talk

Bonnie Bassler discovered that bacteria “talk” to each other, using a chemical language that lets them coordinate defence and mount attacks. The find has stunning implications for medicine, industry – and our understanding of ourselves.
Bonnie Bassler studies how bacteria can communicate with one another, through chemical signals, to act as a unit. Her work could pave the way for new, more potent medicine. In 2002, bearing her microscope on a microbe that lives in the gut of fish, Bonnie Bassler isolated an elusive molecule called AI-2, and uncovered the mechanism behind mysterious behavior called quorum sensing — or bacterial communication. She showed that bacterial chatter is hardly exceptional or anomolous behavior, as was once thought — and in fact, most bacteria do it, and most do it all the time. (She calls the signaling molecules “bacterial Esperanto.”)

Many types of bacteria communicate via the release and detection of diffusible chemical signals. These chemicals, which can be thought of as bacterial pheromones, stimulate
diverse behaviors, including bioluminescence; the horizontal transfer of DNA; the formation of biofilms; and the production of pathogenetic factors, antibiotics, and other secondary metabolites (2). Gram-positive bacteria typically communicate by using oligopeptide signals that are detected by two-component phosphorelay proteins (3), whereas proteobacteria generally signal via acyl-homoserine lactones (AHLs).

Re: Bacteria Use Sophisticated Language, and work in teams

Defending the Christian Worlview, Creationism, and Intelligent Design » Photosynthesis, Protozoans,Plants and Bacterias » Bacteria Use Sophisticated Language, and work in teams