Choi and Park directly visualised the air currents passing around the flying fish's wings and body. Blowing streams of smoke over the fish, the duo saw jets of air accelerating back along the fish's body. Park explains that the tandem arrangement of the large pectoral fin at the front and smaller pelvic fin at the back of the fish's body accelerates the air flow towards the tail like a jet, increasing the fish's lift-to-drag ratio further and improving its flying performance even more.

Sometimes engineers investigate things biologists take for granted.  Flying fish have been observed by countless sailors and cruise passengers, and have been described by life scientists.  It took an engineer, however, to investigate these “unexpected fliers” in a wind tunnel.  Surprisingly, though many have speculated about these creatures, “detailed measurement of wing performance associated with its morphometry for identifying the characteristics of flight in flying fish has not been performed” till some engineers caught the inspiration.
Haecheon Choi, a Korean mechanical engineer, took an interest in flying fish while reading about them to his children.  According to Science Daily, a scientific paper in the Journal of Experimental Biology resulted (see the JEB press release; the paper is available for free).1
Choi and a colleague Hyungmin Park designed experiments using a wind tunnel to measure the gliding efficiency of flying fish.  It was difficult obtaining specimens, the article told; they couldn’t find them in Japanese fish markets, so they got a permit to fish for them in the open sea.  Out of 40 fish caught, five were dried and stuffed (they would have died anyway in the wind tunnel, you know) and outfitted with sensors to measure their aerodynamics.  Some had their pectoral and pelvic fins outstretched in gliding position, or just the front pectoral fins outstretched, while one, as a control, was measured with all its fins in swimming position.  “For the first time, we have performed a direct wind-tunnel experiment to investigate the aerodynamic properties of flying-fish flight and provided qualitative and quantitative data for the flying fish flight,” they were able to boast.
The pair was impressed by their gliders.  “Choi and Park found that the flying fish performed remarkably well: the gliding performance of flying fish is comparable to those of bird wings such as the hawk, petrel and wood duck,” they said in the JEB paper.  The fish performed best in their natural horizontal position close to the water, avoiding the wing-tip vortices that otherwise would cause the most frictional drag.  When gliding above water, their lift-to-drag ratio actually increased, measurements of flow patterns in the wind tunnel showed.  “Park explains that the tandem arrangement of the large pectoral fin at the front and smaller pelvic fin at the back of the fish’s body accelerates the air flow towards the tail like a jet, increasing the fish’s lift-to-drag ratio further and improving its flying performance even more.”  The fish have other morphologic adaptations to improve lift, such as a torpedo-shaped body, a flattened bottom, and the ability to rapidly wag the tail fin on take-off to get airborne, a behavior called taxiing.
Not only are their wing-fins well-adapted for gliding in the air, they are also ideal for swimming in the swept-back position.  “So flying fish are superbly adapted for life in both environments,” the article said.  The intro also contained these fast facts: “Flying fish can remain airborne for over 40s, covering distances of up to 400m at speeds of 70km/h” (that’s about a quarter mile in 30 seconds aloft, gliding at over 40 miles per hour).  The authors said, “The aerodynamic performance of flying fish is comparable to those of various bird wings, and the flying fish has some morphological characteristics in common with the aerodynamically designed modern aircrafts.”
It can reasonably be assumed that live fish perform even better in their natural habitat, with wet skin, the ability to adjust wing camber and attack angle using their muscles, and with additional taxiing movements to stay aloft.  With results in hand showing high performance in the flying fish due to good design, the researchers’ thoughts turned to biomimetics: “Having shown that flying fish are exceptional fliers, Choi and Park are keen to build an aeroplane that exploits ground effect aerodynamics inspired by flying fish technology,” the article ended, stating nothing about evolution or how this flight technology might have evolved.

Having shown that flying fish are exceptional fliers, Choi and Park are keen to build an aeroplane that exploits ground effect aerodynamics inspired by flying fish technology. 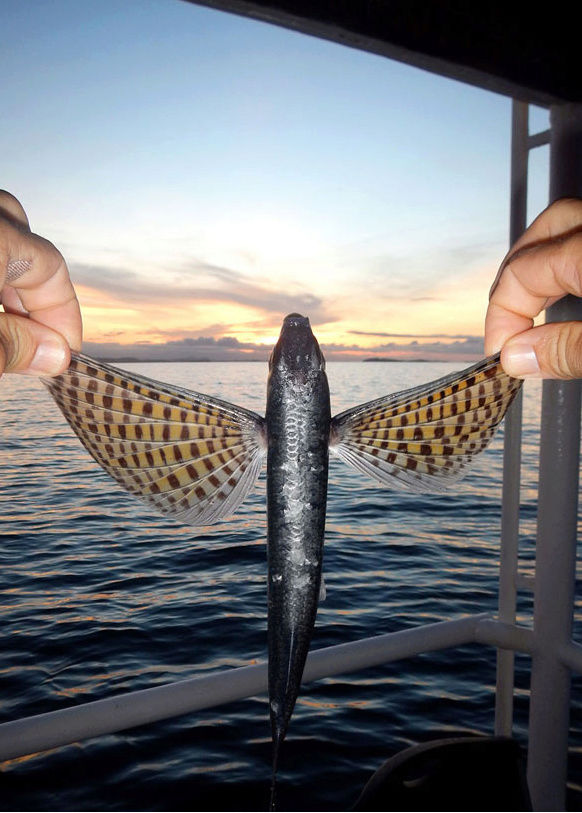 First there was one; now, like magic, there are two independent flying fish families that "evolved." They just evolved.
Saying something doesn't make it so. Darwinists have a bad habit of saying this or that wonder "evolved" with no sense of obligation to say how it evolved. Tracking down the individual lucky accidents that led to a complex adaptation (behavior included) is too hard, so here's what they do: assume evolution, then just assert that the trait evolved, because evolution is already assumed to be a fact.
Worse, they say that it "evolved so that" the animal could do something, like fly. This is a technical foul in evolutionary theory. Evolution cannot plan to arrange mutations toward a goal. If it were a law of nature that one animal "evolved to" fly, then science would predict every animal would fly, including pigs. In the following case, we see how evolutionists commit these fouls. Most fish evolve to swim, we have been taught, but two families independently "evolved so that" they could fly as well.
The BBC News reports the discovery of an "exceptionally preserved" fossil of a flying fish in Middle Triassic strata from China, dated 235-242 million years ago. Nothing in the data or pictures would lead an impartial observer to conclude unguided Darwinian evolution produced this fish. The artist reconstruction shows a beautifully adapted fish with fins outstretched to glide over the water, as modern flying fish do.
The observations, please:

The study shows that the new flying fish, named Potanichthys xingyiensis, was 153mm long and had the "unusual combination of morphological features" associated with gliding strategy in fishes.

This is the earliest known fossil of a flying fish, and it is already well adapted for flying. Moreover, it was found on the opposite side of the world (China) from previously known fossils of its family, found in Austria and Italy.


Weaved around these sentences are statements about geographical distribution, species count and other empirical matters. The magic act begins when we are told that these fish are among the survivors of a mass extinction that destroyed most of earth's species:

The Triassic period saw the re-establishment of ecosystems after the Permian mass extinction.

In evolutionary parlance, "re-established" does not mean simply that the numbers of survivors increased. It means that Evolution told life to be fruitful and multiply, to once again fill the earth and the seas. The agent of this creation is natural selection, producing endless forms most beautiful after destroying 90% of them.


At the end of this Darwinian trick, the magician announces the evolutionary climax:

Gliding has evolved many times in animals, such as in frogs, lizards and mammals but has "evolved only twice among fishes", according to the study: once in the Triassic Thoracopteridae fishes and again in the modern-day Exocoetidae family.

Scientists suggest both families of flying fishes evolved so that they could escape marine predators by "gliding" over-water to safety. (Emphasis added.)

You may applaud now, please.

It may well be that flying fish gained their adaptations from fish that did not have them. It would seem improbable, but not impossible, to imagine the fins growing longer as certain fish leaped above the water to avoid predators. Perhaps this kind of adaptability is itself a product of design. But with no fossil record of the transition, we need a lot more than a Darwinian evolutionist's word for it that a blind, purposeless process produced a functional adaptation.
Instead, we are told that these fish "evolved so that they could escape predators by 'gliding' over-water to safety." No transitional forms are needed; no accounting of mutations is required. The magic occurs in a black box the audience can't see, and presto! -- a fully functioning flying fish leaps above the water, complete with brain software to know how to use its new equipment.
If we demanded that evolutionists drop all teleological language to be consistent with their anti-teleological worldview, evolution would be a very boring act. If we insisted on looking into the black box to see how the trick was done, there would be a loud hissing sound as the hot air escapes. What would be left, if anything, would undoubtedly be a finely tuned, designed mechanism for producing adaptive change. That's not natural selection; that's intelligent design.

Flying fishes are extraordinary aquatic vertebrates capable of gliding great distances over water by exploiting their enlarged pectoral fins and asymmetrical caudal fin. Some 50 species of extant flying fishes are classified in the Exocoetidae (Neopterygii: Teleostei), which have a fossil record no older than the Eocene. The Thoracopteridae is the only pre-Cenozoic group of non-teleosts that shows an array of features associated with the capability of over-water gliding. Until recently, however, the fossil record of the Thoracopteridae has been limited to the Upper Triassic of Austria and Italy. Here, we report the discovery of exceptionally well-preserved fossils of a new thoracopterid flying fish from the Middle Triassic of China, which represents the earliest evidence of an over-water gliding strategy in vertebrates. The results of a phylogenetic analysis resolve the Thoracopteridae as a stem-group of the Neopterygii that is more crown-ward than the Peltopleuriformes, yet more basal than the Luganoiiformes. As the first record of the Thoracopteride in Asia, this new discovery extends the geographical distribution of this group from the western to eastern rim of the Palaeotethys Ocean, providing new evidence to support the Triassic biological exchanges between Europe and southern China. Additionally, the Middle Triassic date of the new thoracopterid supports the hypothesis that the re-establishment of marine ecosystems after end-Permian mass extinction is more rapid than previously thought. 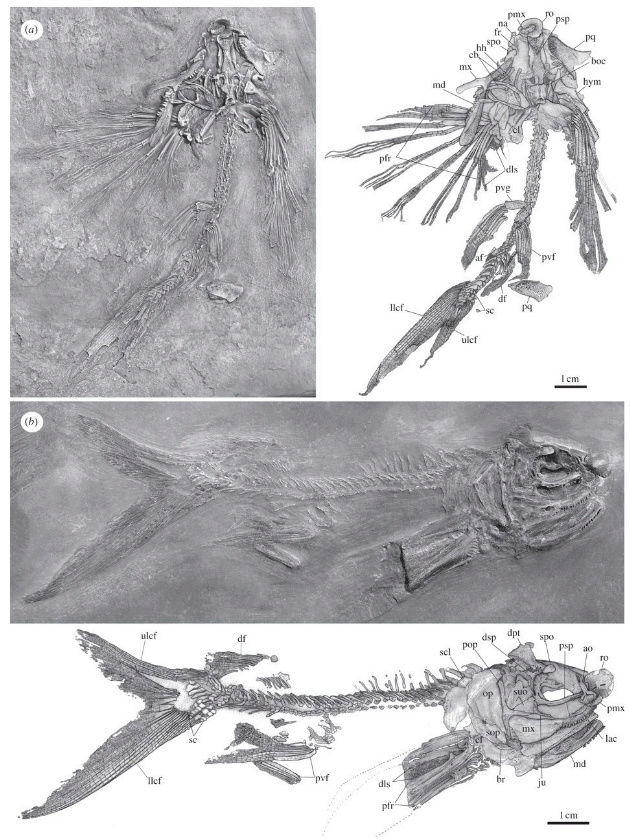