How signaling between cells can orient a mitotic spindle

How signaling between cells can orient a mitotic spindle 4

In multicellular animals, cell communication sometimes serves to orient the direction in which cells divide. Control of division orientation has been proposed to be critical for partitioning developmental determinants and for maintaining epithelial architecture. Surprisingly, there are few cases where we understand the mechanisms by which external cues, transmitted by intercellular signaling, specify the division orientation of animal cells. One would predict that cytosolic molecules or complexes exist that are capable of interpreting extrinsic cues, translating the positions of these cues into forces on microtubules of the mitotic spindle. In recent years, a key intracellular complex has been identified that is required for pulling forces on mitotic spindles in Drosophila, C. elegans and vertebrate systems. One member of this complex, a protein with tetratricopeptide repeat (TPR) and GoLoco (Gα-binding) domains, has been found localized in positions that coincide with the positions of spindle-orienting extracellular cues. Do TPR-GoLoco proteins function as conserved, spatially-regulated mediators of spindle orientation by intercellular signaling? Here, we review the relevant evidence among cases from diverse animal systems where this protein complex has been found to localize to specific cell-cell contacts and to be involved in orienting mitotic spindles.

The mitotic spindle has a crucial role in ensuring the accurate segregation of chromosomes into the two daughter cells during cell division, which is paramount for maintaining genome integrity.  It is a self-organized and dynamic macromolecular structure that is constructed from microtubules, microtubule-associated proteins and motor proteins. Thirty years of research have led to the identification of centrosome-, chromatin- and microtubule-mediated microtubule nucleation pathways that each contribute to mitotic spindle assembly. Far from being redundant pathways, data are now emerging regarding how they function together to ensure the timely completion of mitosis. We are also beginning to comprehend the multiple mechanisms by which cells regulate spindle scaling. Together, this research has increased our understanding of how cells coordinate hundreds of proteins to assemble the dynamic, precise and robust structure that is the mitotic spindle.

The assembly of a bipolar spindle is essential for the accurate segregation of chromosomes during both meiosis and mitosis. The mechanisms of meiotic and mitotic spindle assembly differ to some extent; Mitotic spindle assembly is dependent on the tightly regulated nucleation of microtubules, which form the major structural component of the mitotic spindle. Microtubules are assembled from dimers of α- and β-tubulin, a process that is initiated from γ-tubulin ring complexes (γTuRCs). These complexes have a 13-fold symmetry that functions as a template for the assembly of the ring of 13 protofilaments that make up a growing microtubule. The γTuRC also serves as a cap for the microtubule minus end, whereas tubulin dimers are mostly added to the microtubule plus end. Microtubules continuously polymerize and depolymerize, undergoing rapid cycles of growth and shrinkage before ultimately disassembling. This process, termed dynamic instability, is important for the rapid remodelling of the interphase cytoskeleton as cells enter mitosis and for spindle assembly. Mitotic spindle assembly results in an antiparallel, bipolar microtubule array that consists of three broad categories of microtubules . 6 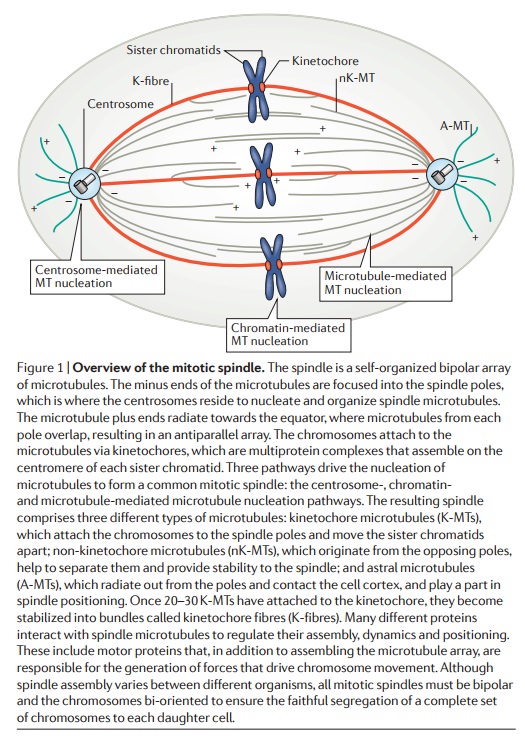 " timely completion, regulation, and coordination " are strong indicators of design.

Cell division orientation is an important part of development and tissue maintenance. Abnormal placement of the division plane has been recognized to disrupt cell fate specification for over 30 years [7] and has more recently been proposed to contribute to defective morphogenesis and cancer.

While cell shape has been shown to be one contributor to placement of cell division planes, recent discoveries have highlighted a role of cell signaling in spindle orientation. Since the 1990s, it has become clear that extrinsic signals can determine the orientation in which certain cells divide. Manipulating the positions of cells and signals has revealed that the position from which an extrinsic signal is presented to a cell can determine the orientation of the cell division machinery. These experiments make clear that extrinsic signals can function not just as simple switches that allow cells to respond to internal polarity (permissive cues), but instead can serve as important positional landmarks that determine the specific orientations of mitotic spindles (instructive cues) (Figure 1): Cells are telling their neighbours in which direction to divide.

In principle, for a cell to divide in an orientation determined by extrinsic signals, several events need to occur:

An example of the importance of intercellular communication for cell division orientation: the role of cadherin in the Drosophila germline
Cell-cell signaling regulates division orientation and cell fate in the male and female germline stem cells (GSCs) in Drosophila. GSCs in the Drosophila germline receive signals from cells within the stem cell niche, aligning the mitotic spindle of the stem cell perpendicular to the area of contact with the niche. These signals come in the form of bone morphogenetic protein (BMP) from cap cells and signals for Janus kinase-signal transducers and activators of transcription (JAK-STAT) signaling from the hub cells in the female and male germline respectively.

E-cadherin-mediated polarity is one key way in which cells communicate to regulate division orientation.

From Morphogenes to Morphogenesis
Morphogenesis cannot be orchestrated by the genome, but makes manifest a higher level of order, corresponding to the cellular scale of size and organization. If a single phrase can stand for the whole riddle, it may be ‘ cell polarity ’, The term refers to the visible directionality. The form taken by tip-growing organisms is surely not a freestanding character, but emerges as another expression of the polarized organization of the entire economy. And when we understand how this large-scale global order is generated, maintained and modulated, the riddle of morphogenesis will be seen in an altogether friendlier light.

What Genes Can't-Do. Of course, many proteins bind chemically with each other to form complexes and structures within cells. Nevertheless, these “self-organizational” properties do not fully account for higher levels of organization in cells, organs, or body plans. Or, as Moss has explained “Neither DNA nor any other aperiodic crystal constitutes a unique repository of heritable stability in the cell; in addition, the chemistry of the solid state does not constitute either a unique or even an ontologically or causally privileged basis for explaining the existence and continuity of order in the living world . . .” Moss, What Genes Can’t Do, 76.

Other features are patterned in relation to the cell as a whole, such as the placement of oral apparatus and contractile vacuole pores, or the cell’s overall handedness. These appear to be established by reference to a global cellular grid that specifies the placement of organelles independent of their molecular architecture. The physical nature of this field remains quite unclear, but its existence is not in doubt.

Proper spindle positioning is critical for ensuring that cell fate determinants are correctly segregated to daughter cells during asymmetric division.

Ultimately, in neurons polarity governs the subcellular organization of components that give rise to either an axonal or a dendritic domain. Specific membranes, organelles, receptors and cytoskeletal components characterize these specialized domains, ensuring the correct directional flow of electrochemical information within neurons.

The presence of at least 3 polarity events occurring in an intermingled manner in situ complicates the interpretation of pharmacological and genetic results aimed at defining the basic determinants of polarity.

Furthermore, polarity studies in vivo are complicated by the fact that neurons in the developing brain are embedded in an intricate 3-dimensional environment composed by cells and extracellular matrix components that contain several directional cues, functioning as extracellular variables that compete with the intrinsic cell polarity pathways.

Extrinsic cues orient the cell division axis in Drosophila embryonic neuroblasts 2
( A neuroblast is a dividing cell that will develop into a neuron often after a migration phase.[1] Neuroblasts differentiate from neural stem cells and are committed to the neuronal fate )

Our work suggests that extrinsic cues are important for CNS tissue polarity through regulating spindle position and apical protein localization.
A neuroblast must be in contact with at least two epithelial cells in order to orient the division axis. We conclude that epithelial cells provide a contact-mediated extrinsic cue that can maintain reproducible neuroblast spindle orientation over multiple cell divisions.

We conclude that in the presence of epithelial cell contact, centrosome position is stably maintained at the apical cortex where it accurately predicts orientation of the division axis and position of newly born GMCs.
We conclude that extrinsic cues are required to maintain centrosome/spindle pole position within the neuroblast.
We conclude that extrinsic cues are required for establishing Par protein asymmetry at prophase, and suggest that this contributes to maintaining the axis of spindle orientation over multiple cell divisions.

Isolated neuroblasts lack a mechanism for maintaining centrosome/spindle pole position from telophase of one division to prophase of the next division, but that a neuroblast-intrinsic mechanism functions from metaphase to telophase to maintain an invariant association between spindle orientation and cortical polarity. We conclude that extrinsic cues influence the timing and position of apical cortical crescent formation, but not the maintenance or function of cortical polarity from metaphase through telophase.

We have shown that embryonic neuroblasts require an extrinsic signal from the overlying epithelium to anchor their centrosome(s) at the apical side of the cell, induce Par cortical polarity at prophase, and position Par cortical crescents at the apical cortex. How does the extrinsic cue stabilize centrosome position throughout multiple rounds of cell division? It is likely to stabilize centrosome-cortex interactions, perhaps by regulating association of microtubule plus-ends with the apical neuroblast cortex. During mitosis, the apical cortex is enriched with several proteins with the potential to interact with microtubules directly and indirectly, such as Pins, Gi, Dlg and Insc  but it remains unknown
whether one or more of these are involved in transducing the extrinsic cue that promotes centrosome anchoring.

Subunit organization in the Dam1 kinetochore complex and its ring around microtubules
https://reasonandscience.catsboard.com/t2107-subunit-organization-in-the-dam1-kinetochore-complex-and-its-ring-around-microtubules