The development of the nervous system poses problems that have little parallel in other tissues. A typical nerve cell, or neuron, has a structure unlike that of any other class of cells, with a long axon and branching dendrites, both of which make many synaptic connections to other cells (Figure 21–66). The central challenge of neural development is to explain how the axons and dendrites grow out, find their right partners, and synapse with them selectively to create a neural network—an electrical signaling system—that functions correctly to guide behavior (Figure 21–67). 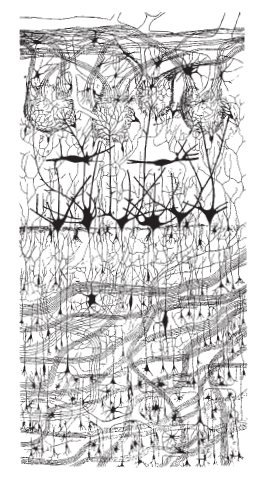 Figure 21–67 The complex organization of nerve cell connections. This drawing depicts a section through a small part of a mammalian brain—the olfactory bulb of a dog—stained by the Golgi technique. The black objects are neurons; the thin lines are axons and dendrites, through which the various sets of neurons are interconnected according to precise rules. (From C. Golgi, Riv. sper. freniat. Reggio-Emilia 1:405–425, 1875.)


The problem is formidable: the human brain contains more than 10^11 neurons, each of which, on average, has to make connections with a thousand others, according to a regular and predictable wiring plan. The precision required is not so great as in a man-made computer, because the brain performs its computations in a different way and is more tolerant of vagaries in individual components. But the human brain nevertheless outstrips all other biological structures in its organized complexity. The components of a typical nervous system—the various classes of neurons, glial cells, sensory cells, and muscles—originate in a number of widely separate locations in the embryo. Thus, in the first phase of neural development, the different parts of the nervous system develop according to their own local programs: neurons are born and assigned specific characters according to the place and time of their birth, under the control of inductive signals and transcription regulators, by mechanisms of the types we have already discussed. In the next phase, newborn neurons extend axons and dendrites along specific routes toward their target cells, guided by extracellular signals that attract or repel them. In the third phase, neurons form synapses with other neurons or muscle cells, setting up a provisional but orderly network of connections. In the final phase, which continues into adult life, the synaptic connections are adjusted and refined through mechanisms that usually depend on synaptic signaling between the cells involved (Figure 21–68). At all stages, neurons are in intimate contact with various types of non-neuronal supporting cells—the glial cells.

We start our account here with the first phase of neural development: the generation of neural progenitors and their differentiation into hundreds of different neuronal subtypes, along with a much smaller number of glial types. Although the nervous system is exceptional in the extent of cell diversity, the process depends on the same principles that generate different cell types in other organs.  We turn now to vertebrates. The vertebrate spinal cord, the brain, and the retina of the eye together constitute the central nervous system (CNS). They all originate as parts of the neural tube. The brain and eyes develop from the anterior neural tube and the spinal cord from the posterior. The developmental anatomy is seen at its simplest in the spinal cord. As it develops, the epithelium forming the walls of the posterior neural tube becomes enormously thickened as the cells proliferate and differentiate, creating a highly organized structure of neurons and glial cells, surrounding a small central channel. Bands of neurons with different future functions—and expressing different genes—are laid out along the dorsoventral axis of the tube. Motor neurons (those that control the muscles) are located ventrally, whereas neurons that process sensory information are found dorsally. This pattern is established by opposing gradients of morphogens. These are secreted by specialized groups of cells that run the length of the ventral and dorsal midlines of the neural tube (Figure 21–69). 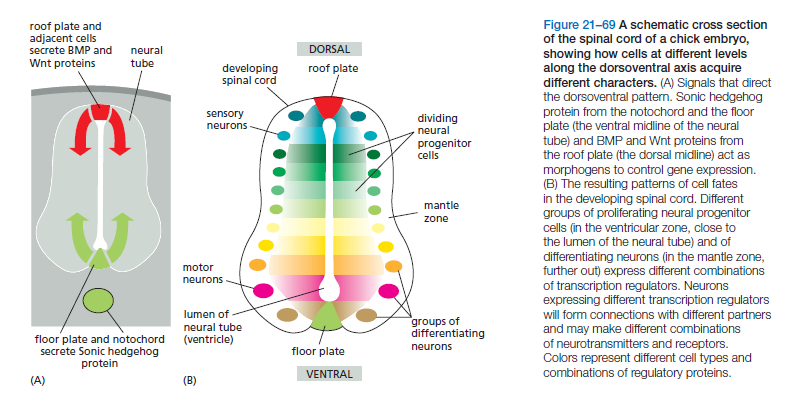 The two morphogen gradients—consisting of Sonic hedgehog protein from the ventral source and BMP and Wnt from the dorsal source—help induce different groups of proliferating neural progenitor cells and differentiating neurons to express different combinations of transcription regulators. These regulators in turn drive the production of different combinations of neurotransmitters, receptors, cell–cell adhesion proteins, and other molecules, creating terminally differentiated neurons that will form synaptic connections selectively with the right partners and exchange appropriate signals with them.

Extracellular morphogen gradients, however, are not the only way to generate cell diversity. As we saw earlier in our discussion of Drosophila neuroblasts (see Figure 21–36), different cell types can also be generated by temporal patterning, in which an intracellular program changes the character of a progenitor cell over time, giving rise to different cell types as development progresses. This mechanism also seems to operate in vertebrate neurogenesis. The most striking illustration comes from study of another part of the CNS—the mammalian cerebral cortex.
Although the cerebral cortex is the most complex structure in the human body, it has a simple beginning—from the anterior neural tube. As in the spinal cord, the cells that form the walls of the tube proliferate, and the neuroepithelium thickens and expands as they divide. On a predictable schedule, the divisions of the neuroepithelial cells begin to produce a succession of cells committed to terminal differentiation as neurons. These future neurons are born close to the lumen (the central cavity) of the tube. From here, they migrate outward, losing attachment to the lumenal surface and crawling outward along neighboring cells that continue to span the full thickness of the neuroepithelium. These latter neuroepithelial cells do double duty, functioning as progenitors of neurons and glia, and as supporters of the epithelial architecture. They become stretched out as radial glial cells, forming a scaffold that continues to span the neuroepithelium even as this grows to an enormous thickness (Figure 21–70). At the same time, the radial glial cells continue to divide as neural precursors, giving rise to both
neurons and glial cells—new radial glial cells as well as glial cells of other types. The newborn neurons, migrating along the radial glial cells, find their appropriate resting places in the developing cortex, where they mature, and from these sites they send out their axons and dendrites. The first-born neurons settle closest to their birthplace near the lumen, while neurons born later crawl past them to settle farther out (Figure 21–71). The successive generations of neurons thus build up as a series of cortical layers, ordered by birthdate and endowed with different intrinsic characters.

The Wnt signaling pathways are a group of signal transduction pathways made of proteins that pass signals into a cell through cell surface receptors. Three Wnt signaling pathways have been characterized: the canonical Wnt pathway, the noncanonical planar cell polarity pathway, and the noncanonical Wnt/calcium pathway. All three pathways are activated by binding a Wnt-protein ligand to a Frizzled family receptor, which passes the biological signal to the protein dishevelled inside the cell. The canonical Wnt pathway leads to regulation of gene transcription. The noncanonical planar cell polarity pathway regulates the cytoskeleton that is responsible for the shape of the cell. The noncanonical Wnt/calcium pathway regulates calcium inside the cell. Wnt signaling pathways use either nearby cell-cell communication (paracrine) or same-cell communication (autocrine). They are highly evolutionarily conserved in animals, which means they are similar across animal species from fruit flies to humans.[1][2]