The pentose phosphate pathway consists of three stages, in which NADPH is produced, pentoses undergo isomerization a , and glycolytic intermediates are recovered. The pathway provides NADPH for reductive biosynthesis and ribose-5-phosphate b for nucleotide biosynthesis in the quantities that the cell requires. One role of the pentose phosphate pathway is production of pentoses, which are constituents of nucleotides. The second role of the pentose phosphate pathway is the production of metabolic (active) hydrogen, [H] in the form of NAD(P)H. This metabolic hydrogen is needed for many kinds of reductive syntheses. Each of the two major pathways of carbohydrate metabolism has a role in providing specific building blocks for cell synthesis . . . The Embden-Meyerhof pathway and the citric acid cycle not only furnish energy as ATP and reduced diphosphopyridine nucleotide (NADH), but also provide precursors of alanine, glutamic acid and the amino acids derived from it, and aspartic acid and its many metabolic products, including the purines and pyrimidines. The pentose phosphate pathway provides energy as reduced triphosphopyridine nucleotide (NADPH) as well as precursors for a number of aminoacids such as histidine, and aromatic amino acids. It also provides ribose and deoxyribose. Some of the reactions, in the reverse direction, are part of the Calvin cycle for- the assimilation of C02 by photosynthetic cells. 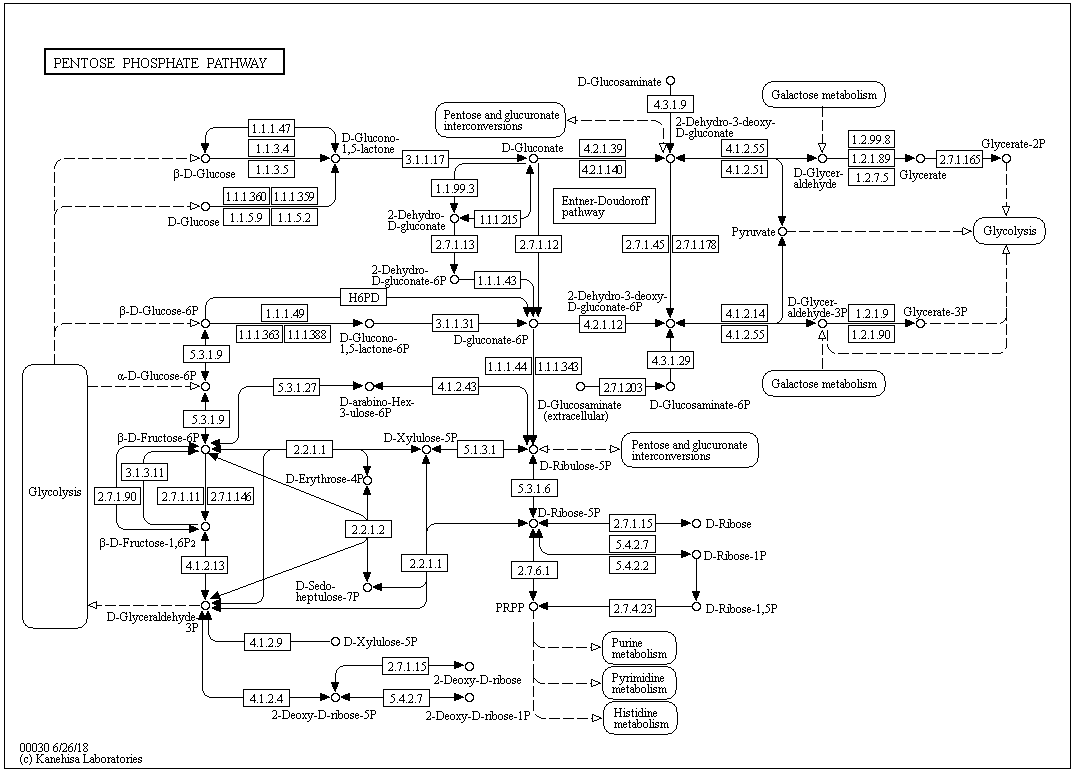 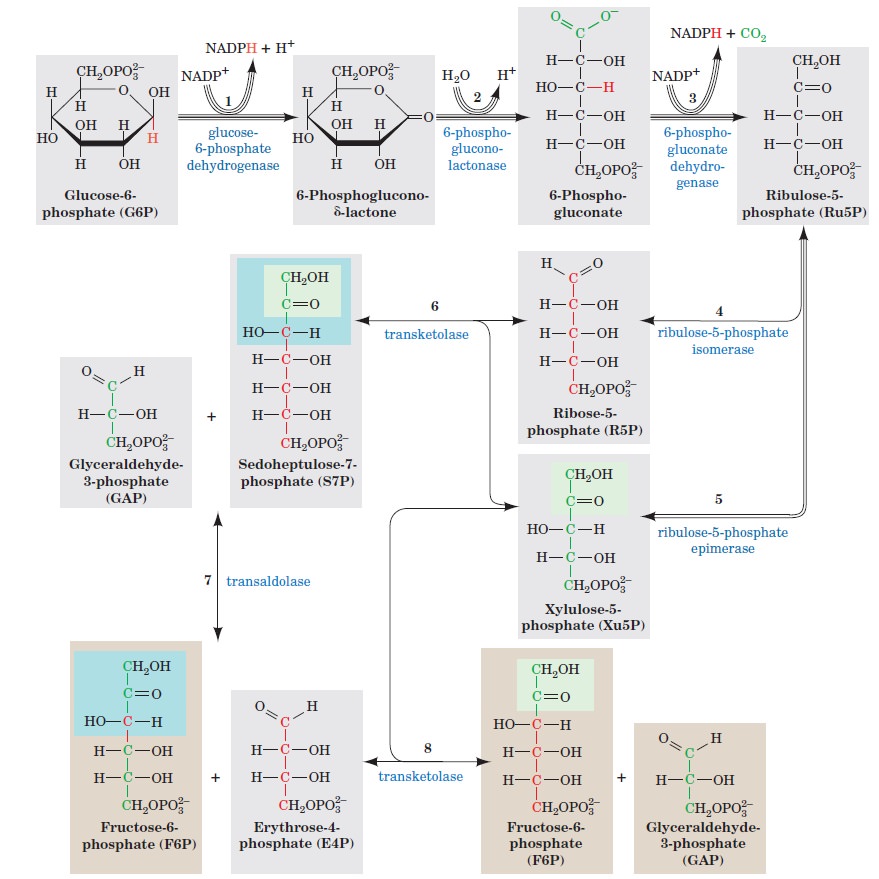 The pentose phosphate pathway.
The number of lines in an arrow represents the number of molecules reacting in one turn of the pathway so as to convert 3 G6P to 3 CO2, 2 F6P, and 1 GAP. For the sake of clarity, sugars from Reaction 3 onward are
shown in their linear forms. The carbon skeleton of R5P and the atoms derived from it are drawn in red, and those from Xu5P are drawn in green. The C2 units transferred by transketolase are shaded in green, and the C3 units transferred by transaldolase are shaded in blue. Double-headed arrows indicate reversible reactions. 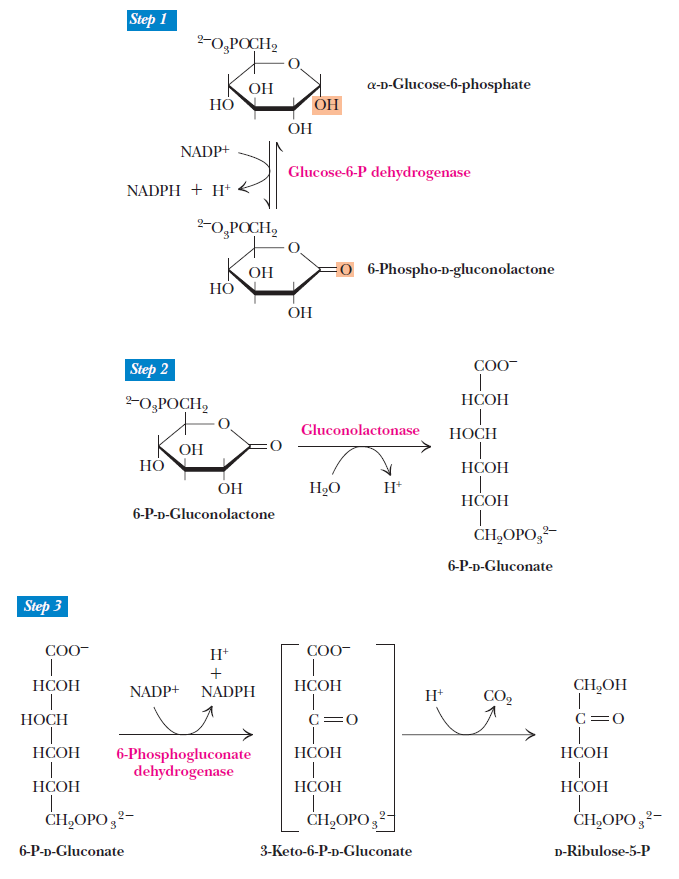 1. Glucose-6-Phosphate Dehydrogenase
The pentose phosphate pathway begins with the oxidation of glucose-6-phosphate. The products of the reaction are a cyclic ester (the lactone of phosphogluconic acid) and NADPH (Figure above). Glucose-6- phosphate dehydrogenase (G6PDH), which catalyzes this reaction, is highly specific for NADP1. As the first step of a major pathway, the reaction is irreversible and highly regulated. Glucose-6-phosphate dehydrogenase is strongly inhibited by the product coenzyme, NADPH, and also by fatty acid esters of coenzyme A (which are intermediates of fatty acid biosynthesis).

2. Gluconolactonase
The gluconolactone produced in step 1 is hydrolytically unstable and readily undergoes a spontaneous ring-opening hydrolysis, although an enzyme, gluconolactonase, accelerates this reaction ( Step two, figure above ). The linear product, the sugar acid 6-phospho-d-gluconate, is further oxidized in step 3.

There Are Four Nonoxidative Reactions in the Pentose Phosphate Pathway
This portion of the pathway begins with an isomerization and an epimerization c , and it leads to the formation of either d-ribose-5-phosphate or d-xylulose-5-phosphate. These intermediates can then be converted into glycolytic intermediates or directed to biosynthetic processes.

4. Phosphopentose Isomerase
Phosphopentose Isomerase interconverts ribulose-5-P and ribose- 5-P via an enediol intermediate (Figure below). The reaction (and mechanism) is quite similar to the phosphoglucoisomerase reaction of glycolysis, which interconverts glucose-6-P and fructose-6-P. The ribose-5-P produced in this reaction is utilized in the biosynthesis of coenzymes (including NADH, NADPH, FAD, and B12) nucleotides, and nucleic acids (DNA and RNA).

5. Phosphopentose Epimerase
This reaction converts ribulose-5-P to another ketose, namely, xylulose-5-P. This reaction also proceeds by an enediol intermediate but involves an inversion at C-3 (Figure below).

In the reaction, an acidic proton located a- to a carbonyl carbon is removed to generate the enediolate, but the proton is added back to the same carbon from the opposite side. Note the distinction in nomenclature here. Interchange of groups on a single carbon is an epimerization, and interchange of groups between carbons is an isomerization. To this point, the pathway has generated a pool of pentose phosphates. The three pentose-5-phosphates coexist at equilibrium. The pathway has also produced two molecules of NADPH for each glucose- 6-P converted to pentose-5-phosphate. The next three steps rearrange the five-carbon skeletons of the pentoses to produce three-, four-, six-, and seven-carbon units, which can be used for various metabolic purposes. Why should the cell do this? Very often, the cellular need for NADPH is considerably greater than the need for ribose-5-phosphate. The next three steps thus return some of the five-carbon units to glyceraldehyde-3-phosphate and fructose-6-phosphate, which can enter the glycolytic pathway. The advantage of this is that the cell has met its needs for NADPH and ribose-5-phosphate in a single pathway, yet at the same time it can return the excess carbon metabolites to glycolysis.

This is remarkable and raises the question: How did this arrangement emerge? We can observe, that a single pathway is less complex, and the metabolic pathways choice follows a logic and attends a specific distant demand, to produce the various metabolites in the right amount.

Introduction
The main molecule in the body that makes anabolic processes possible is NADPH.  Because of the structure of this molecule it readily donates hydrogen ions to metabolites thus reducing them and making them available for energy harvest at a later time. The PPP is the main source of synthesis for NADPH.  The pentose phosphate pathway (PPP) is also responsible for the production of Ribose-5-phosphate which is an important part of nucleic acids. Finally the PPP can also be used to produce glyceraldehyde-3-phosphate which can then be fed into the TCA and ETC cycles allowing for the harvest of energy. Depending on the needs of the cell certain enzymes can be regulated and thus increasing or decreasing the production of desired metabolites. The enzymes reasonable for catalyzing the steps of the PPP are found most abundantly in the liver (the major site of gluconeogenesis) more specifically in the cytosol. The cytosol is where fatty acid synthesis takes place which is a NADPH dependent process.

Oxidation Phase
The beginning molecule for the PPP is glucose-6-P which is the second intermediate metabolite in glycolysis.

The PPP and glycolysis are therefore interdependent.

Glucose-6-P is oxidized in the presence of glucose-6-P dehydrogenase and NADP+.  This step is irreversible and is highly regulated.  NADPH and fatty acyl-CoA are strong negative inhibitors to this enzyme.  The purpose of this is to decrease production of NADPH when concentrations are high or the synthesis of fatty acids is no longer necessary.
The metabolic product of this step is gluconolactone which is hydrolytrically unstable.  Gluconolactonase causes gluconolactone to undergo a ring opening hydrolysis.  The product of this reaction is the more stable sugar acid, 6-phospho-D-gluconate.
6-phospho-D-gluconate is oxidized by NADP+ in the presence of 6-phosphogluconate dehydrogenase which yields ribulose-5-phosphate.
The oxidation phase of the PPP is solely responsible for the production of the NADPH to be used in anabolic processes. 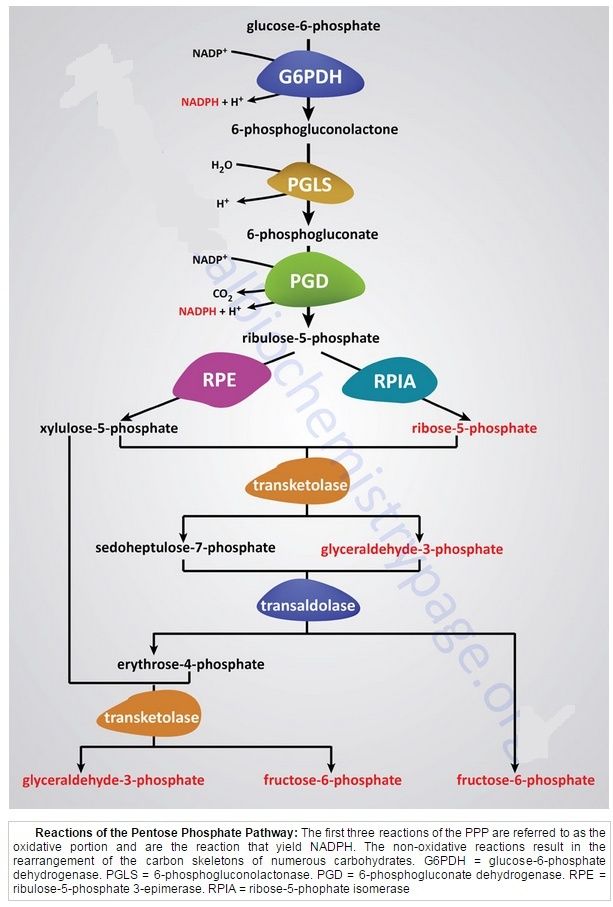 In this oxidative pathway, NADP is the electron acceptor, yielding NADPH. Rapidly dividing cells, such as those of bone marrow, skin, and intestinal mucosa, and those of tumors, use the pentose ribose 5-phosphate to make RNA, DNA, and such coenzymes as ATP, NADH, FADH2, and coenzyme A. In other tissues, the essential product of the pentose phosphate pathway is not the pentoses but the electron donor NADPH, needed for reductive biosynthesis or to counter the damaging effects of oxygen radicals. Tissues that carry out extensive fatty acid synthesis (liver, adipose, lactating mammary gland) or very active synthesis of cholesterol and steroid hormones (liver, adrenal glands, gonads) require the NADPH provided by this pathway. Erythrocytes and the cells of the lens and cornea are directly exposed to oxygen and thus to the damaging free radicals generated by oxygen. By maintaining a reducing atmosphere (a high ratio of NADPH to NADP and a high ratio of reduced to oxidized glutathione), such cells can prevent or undo oxidative damage
to proteins, lipids, and other sensitive molecules.

a In chemistry isomerization (also isomerisation) is the process by which one molecule is transformed into another molecule which has exactly the same atoms, but the atoms have a different arrangement e.g. A-B-C → B-A-C (these related molecules are known as isomers ). 4

c The process of forming an epimer by changing one asymmetric centre in a compound that has more than one.  Epimerization is a chemical process where an epimer is made to transform into its chiral counterpart. It can happen in condensed tannins depolymerisation reactions. Epimerisation can be spontaneous (generally a slow process), or catalyzed by enzymes, e.g. the epimerization between the sugars N-acetylglucosamine and N-acetylmannosamine, which is catalyzed by renin-binding protein. 7 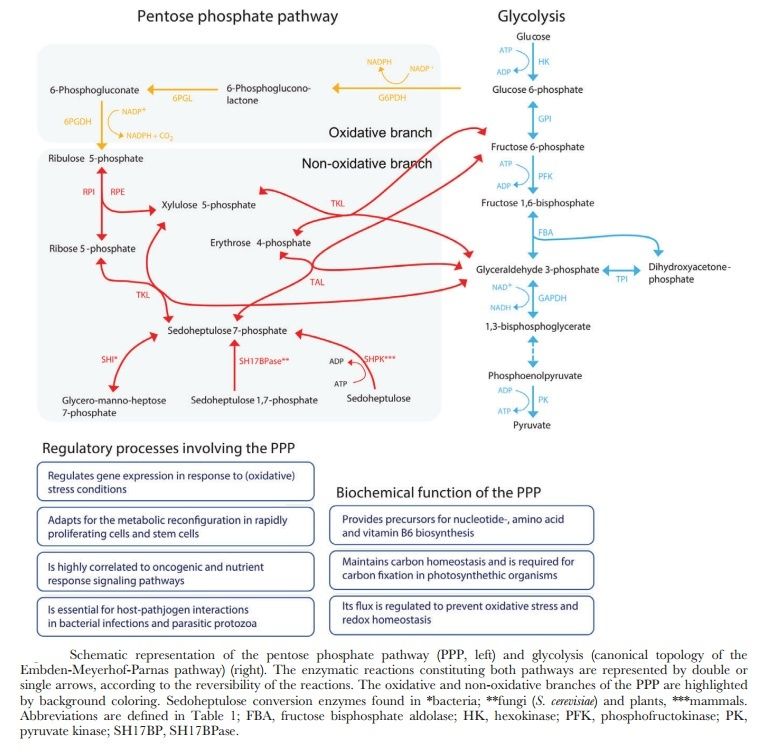 The reaction sequences of central metabolism, glycolysis and the pentose phosphate pathway provide essential precursors for nucleic acids, amino acids and lipids. However, their evolutionary origins are not yet understood. 1

Here, we provide evidence that their structure could have been fundamentally shaped by the general chemical environments in earth's earliest oceans.  The 29 observed reactions include the formation and/or interconversion of glucose, pyruvate, the nucleic acid precursor ribose‐5‐phosphate and the amino acid precursor erythrose‐4‐phosphate, antedating reactions sequences similar to that used by the metabolic pathways.

Despite cellular organisms possess sophisticated metabolic capacities, the origin of the underlying metabolic network is only barely understood

Due to the complexity of the metabolic pathways, it has been argued that metabolism‐like chemical reaction sequences are unlikely to be catalysed by simple environmental catalysts