Phosphorus is a key biologic element, and a prebiotic pathway leading to its incorporation into biomolecules has been difficult to ascertain. 1 Phosphorus (P) is a key biologic element and is the limiting reagent in many ecosystems. Phosphorus is ubiquitous in biochemistry because phosphorylated biomolecules play major roles in replication and information (as RNA and DNA), metabolism (as ATP, NADPH, and other coenzymes), and structure (as phospholipids). Several key properties of P as phosphate make it advantageous to biologic systems, including thermodynamic instability coupled with kinetic stability, charge and coordination state, and a constant oxidation state under typical redox conditions. These features are especially critical to the formation of large informational polymers, and hence highly relevant to the origin and development of early life. The geochemical pathways that led to the abiotic production of condensed phosphates in high yield on the early Earth are not understood.

Hugh Ross: The short supply of phosphorus poses a significant problem for a naturalistic origin of life because so much of this ingredient is required to make replicator molecules. Phosphates are part of the backbone of both DNA and RNA. A phosphate molecule must accompany every nucleoside in them. Possible precursors to DNA and RNA molecules would seem to require similar phosphate richness. Without life molecules (already assembled and operating), no known natural process can harvest the amounts of phosphorus necessary for life from the environment. All the phosphate-rich deposits on Earth are produced by life.

Phosphorus is a key biogenic molecule which comprises of about 1% of the dry weight of cells. It serves in all life properties such as cellular metabolism (cellular respiration, involving sugar phosphates, P containing enzymes etc.), structure (phospholipids) and a necessary part of information storing molecules (RNA and DNA). Replication and metabolism are the two main biochemical processes that mainly rely on P as it constitutes 3% of the atomic composition of RNA and about 1% of the atomic composition of the metabolomics. Most interestingly, about 44% of all metabolic compounds are biological P compounds. The phosphorylated biomolecules occurring in living organisms are classified into the following categories;

The chart above shows a generic scheme to show various routes that have been described so far in the prebiotic phosphorylation reactions where; OP stands for orthophosphate and TMP stands for trimetaphosphate. 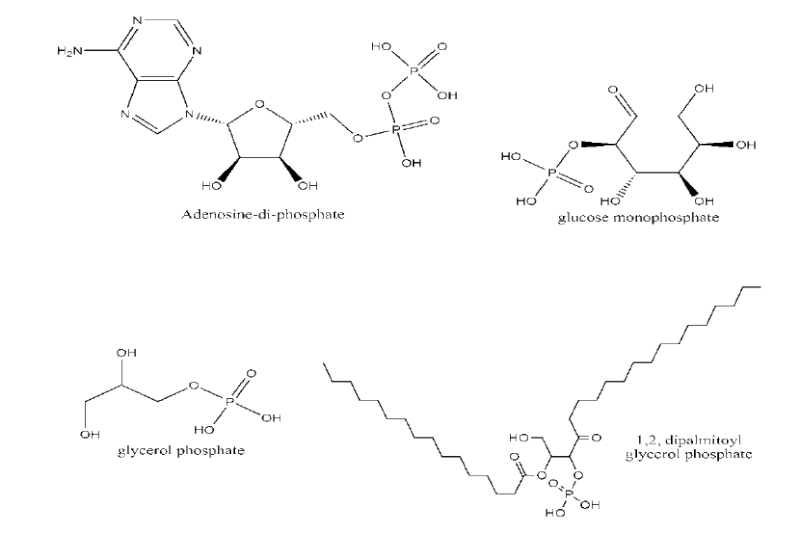 Some biological phosphates that are vital for cellular activities and hence for life. These include simple sugar phosphates such as glycerol phosphate (for respiration and cell structure) and highly complex molecules such as nucleotides (for storing information), and phospholipids (for structure).

The reaction given above is thermodynamically unfavorable. This is because this process is trying to ―pull out water into the aqueous environment, thus making phosphorylation extremely challenging and with low efficiency. This is a major reason why the phosphorylation process has been a challenge in prebiotic chemistry. The major challenging aspects include a common route to synthesize significant biological P compounds with good yields and with conditions relevant to the Hadean Earth and in the presence of water.

A variety of pathways now are available as possible solutions for what this author used to refer to as the ‘phosphate problem’. The ‘problem’ seems to have evolved gradually into the less perplexing one of having to decide which of several possible mechanisms are most likely to have operated on the primitive Earth.

Phosphorus and sulfur for energetic bonds Phosphorus and sulfur create the principal energy-carrying bonds of organic chemistry 4 The principle phosphoryl-transfer cofactors are the nucleoside triphosphates (NTPs), with ATP serving as the major energy carrier and other NTPs performing special functions that include a signaling role because of their restricted uses. The central role and high concentration of phosphorus in biochemistry is disproportionate to its availability in most geochemical settings on Earth today. There are good reasons that no other chemical group may be able to do what phosphorus does in biochemistry, but its inevitability alone does not address the problem of either obtaining it or using it as a vehicle of disequilibrium. 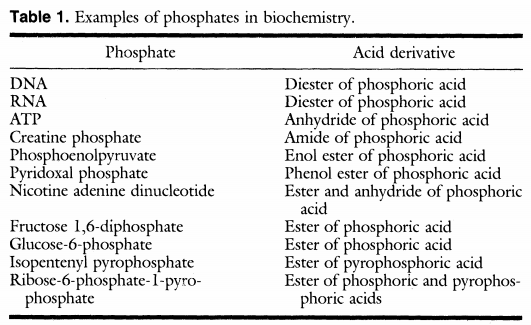 Phosphate is essential for all living systems, serving as a building block of genetic and metabolic machinery. However, it is unclear how phosphate could have assumed these central roles on primordial Earth, given its poor geochemical accessibility. While most research on the evolution of living systems has been focused on sequences and genomes, some answers to fundamental questions about the emergence of life may be hidden in the architecture of the complex biochemical reaction networks that sustain the cell.  Among the many unanswered questions on life’s origin, the enigma of how phosphate ended up playing a prominent role in cellular biochemistry has been puzzling scientists for decades.