Cytochrome c reductase is a large assembly of membrane protein subunits. Three subunits form a catalytic core that passes electrons from ubiquinol to cytochrome c, with a structure that has been highly conserved from bacterial ancestors 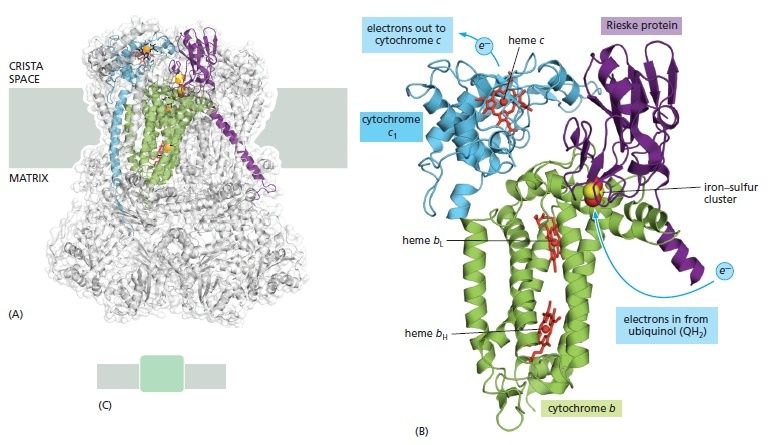 It pumps protons by a vectorial transfer of protons that involves a binding site for a second molecule of ubiquinone; the elaborate redox loop mechanism used is called the Q cycle because while one of the electrons received from each QH2 molecule is transferred from ubiquinone through the complex to the carrier protein cytochrome c, the other electron is recycled back into the quinone pool. Through the mechanism illustrated below the Q cycle increases the total amount of redox energy that can be stored in the electrochemical proton gradient. As a result, two protons are pumped across the crista membrane for every electron that is transferred from NADH dehydrogenase to cytochrome c.

The two-step mechanism of the cytochrome c reductase Q-cycle. (A) In step 1, ubiquinol reduced by NADH dehydrogenase docks to the cytochrome c reductase complex. Oxidation of the quinol produces two protons and two electrons. The protons are released into the cristae space. One electron passes via an iron-sulfur cluster to heme c1, and then to the soluble electron carrier protein cytochrome c on the membrane surface. The second electron passes via hemes bL and bH to a ubiquinone (red Q) bound at a separate site near the matrix side of the protein. Uptake of a proton from the matrix produces an ubisemiquinone radical, which remains bound to this site (red QH• in B). (B) In step 2, a second ubiquinol (blue QH2) docks and releases two protons and two electrons, as described for step 1. One electron is passed to a second cytochrome c, whereas the other electron is accepted by the ubisemiquinone. The ubisemiquinone takes up a proton from the matrix and is released into the lipid bilayer as fully reduced ubiquinol (red QH2).
On balance, the oxidation of one ubiquinol in the Q cycle pumps two protons through the membrane by a directional release and uptake of protons, while releasing another two into the cristae space. In addition, in each of the two steps (A) and (B), one electron is transferred to a cytochrome c carrier 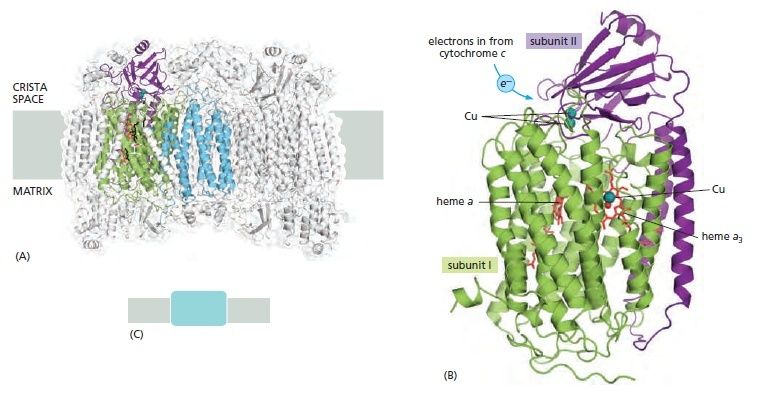 The structure of cytochrome c oxidase. The final complex in the mitochondrial electron-transfer chain consists of 13 different protein subunits. (A) The entire dimeric complex is shown, positioned in the crista membrane. The highly conserved subunits I (green), II (purple), and III (blue) are encoded by the mitochondrial genome, and they form the functional core of the enzyme. (B) The functional core of the complex. Electrons pass through this structure from cytochrome c via bound copper ions (blue spheres) and hemes
(red) to an O2 molecule bound between heme a3 and a copper ion. The four protons needed to reduce O2 to water are taken up from the matrix. (C) This shows the symbol for cytochrome c oxidase used throughout this chapter.

The atomic-resolution structures, combined with studies of the effect of mutations introduced into the enzyme by genetic engineering of the yeast and bacterial proteins, have revealed the detailed mechanisms of this electron-driven proton pump. Because oxygen has a high affinity for electrons, it can release a large amount of free energy when it is reduced to form water. Thus, the emergence of cellular respiration, in which O2 is converted to water, enabled organisms to harness much more energy than can be derived from anaerobic metabolism.  The availability of the large amount of energy released by the reduction of molecular oxygen to form water is thought to have been essential to the emergence of multicellular life: this would explain why all large organisms respire. The ability of biological systems to use O2 in this way, however, requires sophisticated chemistry. Once a molecule of O2 has picked up one electron, it forms a superoxide radical anion (O2•–) that is dangerously reactive and rapidly takes up an additional three electrons wherever it can get them, with destructive effects on its immediate environment. We can tolerate oxygen in the air we breathe only because the uptake of the first electron by the O2 molecule is slow, allowing cells to use enzymes to control electron uptake by oxygen. Thus, cytochrome c oxidase holds on to oxygen at a special bimetallic center, where it remains clamped between a heme-linked iron atom and a copper ion until it has picked up a total of four electrons. Only then are the two oxygen atoms of the oxygen molecule safely released as two molecules of water 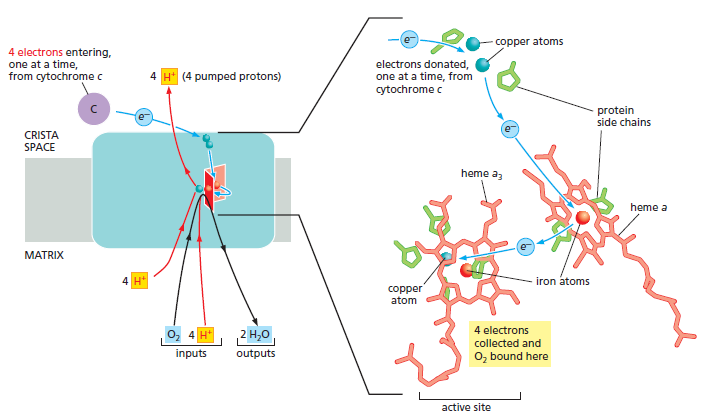 The reaction of O2 with electrons in cytochrome c oxidase. Electrons from cytochrome c pass through the complex via bound copper ions (blue spheres) and hemes (red) to an O2 molecule bound between heme a3 and a copper ion. Iron ions are shown as red spheres. The iron atom in heme a serves as an electron queuing point where electrons are held so that they can be released to an O2 molecule (not shown) that is held at the bimetallic center active site, which is formed by the central iron of the other heme (heme a3) and a closely apposed copper atom. The four protons needed to reduce O2 to water are removed from the matrix. For each O2 molecule that undergoes the reaction 4e– + 4H+ + O2 → 2H2O, another four protons are pumped out of the matrix by mechanisms that are driven by allosteric changes in protein conformation

The cytochrome c oxidase reaction accounts for about 90% of the total oxygen uptake in most cells. This protein complex is therefore crucial for all aerobic life. Cyanide and azide are extremely toxic because they bind to the heme iron atoms in cytochrome c oxidase much more tightly than does oxygen, thereby greatly reducing ATP production.