Defending the Christian Worlview, Creationism, and Intelligent Design » Molecular biology of the cell » Metabolism » HOW CELLS OBTAIN ENERGY FROM FOOD

HOW CELLS OBTAIN ENERGY FROM FOOD

The constant supply of energy that cells need to generate and maintain the biological order that keeps them alive comes from the chemical-bond energy in food molecules. The proteins, lipids, and polysaccharides that make up most of the food we eat must be broken down into smaller molecules before our cells can use them—either as a source of energy or as building blocks for other molecules. Enzymatic digestion breaks down the large polymeric molecules in food into their monomer subunits— proteins into amino acids, polysaccharides into sugars, and fats into fatty acids and glycerol. After digestion, the small organic molecules derived from food enter the cytosol of cells, where their gradual oxidation begins. Sugars are particularly important fuel molecules, and they are oxidized in small controlled steps to carbon dioxide (CO2) and water

Schematic representation of the controlled stepwise oxidation of sugar in a cell, compared with ordinary burning. (A) If the sugar were oxidized to CO2 and H2O in a single step, it would release an amount of energy much larger than could be captured for useful purposes. (B) In the cell, enzymes catalyze oxidation via a series of small steps in which free energy is transferred in conveniently sized packets to carrier molecules—most often ATP and NADH. At each step, an enzyme controls the reaction by reducing the activation-energy barrier that has to be surmounted before the specific reaction can occur. The total free energy released is exactly the same in (A) and (B).

In this section, we trace the major steps in the breakdown, or catabolism, of sugars and show how they produce ATP, NADH, and other activated carrier molecules in animal cells. A very similar pathway also operates in plants, fungi, and many bacteria. As we shall see, the oxidation of fatty acids is equally important for cells. Other molecules, such as proteins, can also serve as energy sources when they are funneled through appropriate enzymatic pathways.

Glycolysis Is a Central ATP-Producing Pathway 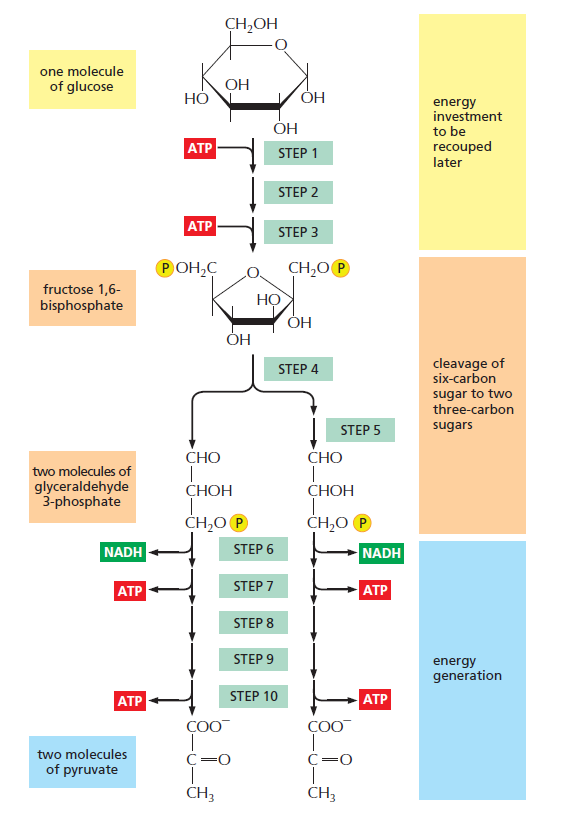 An outline of glycolysis. Each of the 10 steps shown is catalyzed by a different enzyme. Note that step 4 cleaves a six-carbon sugar into two threecarbon sugars, so that the number of molecules at every stage after this doubles. As indicated, step 6 begins the energy generation phase of glycolysis. Because two molecules of ATP are hydrolyzed in the early, energy-investment phase, glycolysis results in the net synthesis of 2 ATP and 2 NADH molecules per molecule of glucose 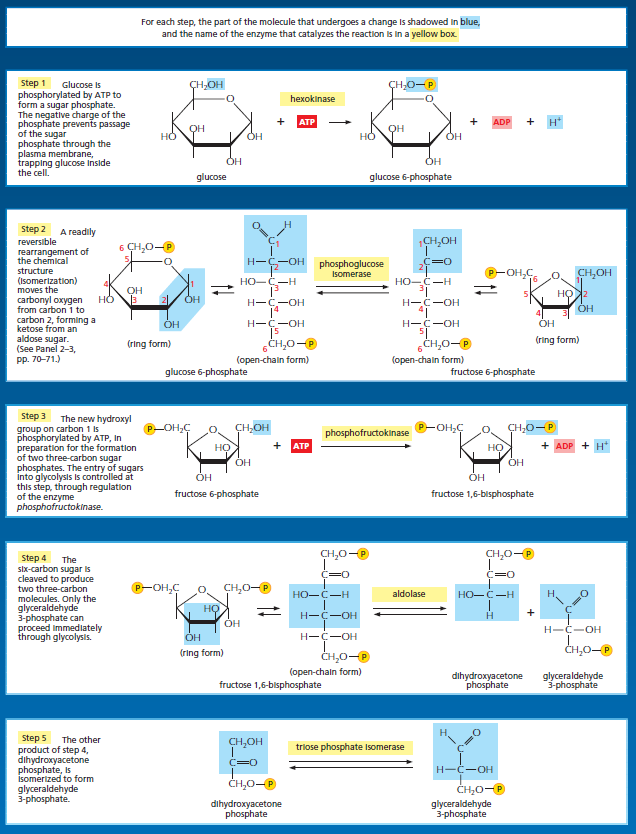 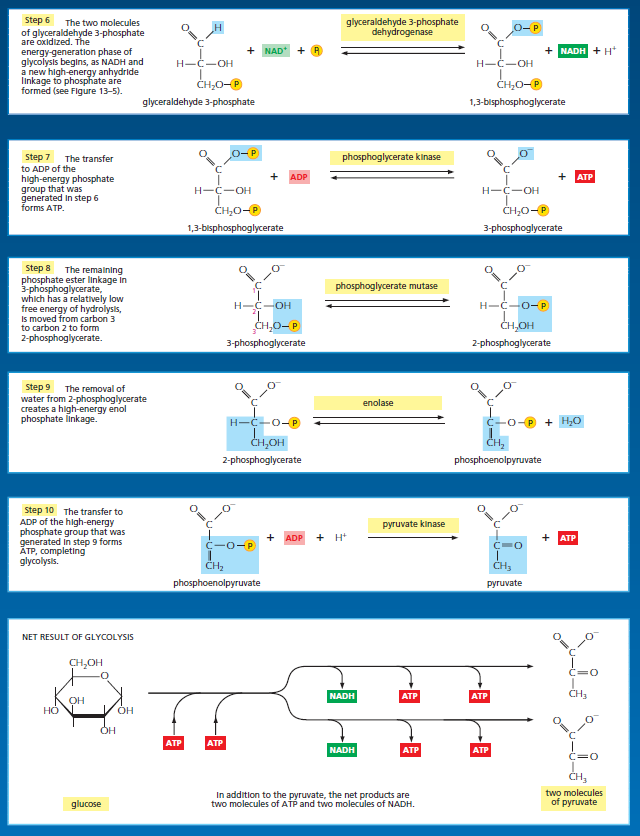 Glycolysis involves a sequence of 10 separate reactions, each producing a different sugar intermediate and each catalyzed by a different enzyme. Like most enzymes, these have names ending in ase—such as isomerase and dehydrogenase—to indicate the type of reaction they catalyze.Although no molecular oxygen is used in glycolysis, oxidation occurs, in that electrons are removed by NAD+ (producing NADH) from some of the carbons derived from the glucose molecule. The stepwise nature of the process releases the energy of oxidation in small packets, so that much of it can be stored in activated carrier molecules rather than all of it being released as heat. Thus, some of the energy released by oxidation drives the direct synthesis of ATP molecules from ADP and Pi, and some remains with the electrons in the electron carrier NADH. Two molecules of NADH are formed per molecule of glucose in the course of glycolysis. In aerobic organisms, these NADH molecules donate their electrons to the electron-transport chain, and the NAD+ formed from the NADH is used again for glycolysis.

Fermentations Produce ATP in the Absence of Oxygen

For most animal and plant cells, glycolysis is only a prelude to the final stage of the breakdown of food molecules. In these cells, the pyruvate formed by glycolysis is rapidly transported into the mitochondria, where it is converted into CO2 plus acetyl CoA, whose acetyl group is then completely oxidized to CO2 and H2O. In contrast, for many anaerobic organisms—which do not utilize molecular oxygen and can grow and divide without it—glycolysis is the principal source of the cell’s ATP. Certain animal tissues, such as skeletal muscle, can also continue to function when molecular oxygen is limited. In these anaerobic conditions, the pyruvate and the NADH electrons stay in the cytosol. The pyruvate is converted into products excreted from the cell—for example, into ethanol and CO2 in the yeasts used in brewing and breadmaking, or into lactate in muscle. In this process, the NADH gives up its electrons and is converted back into NAD+. This regeneration of NAD+ is required to maintain the reactions of glycolysis.  Energy-yielding pathways like these, in which organic molecules both donate and accept electrons (and which are often, as in these cases, anaerobic), are called fermentations. 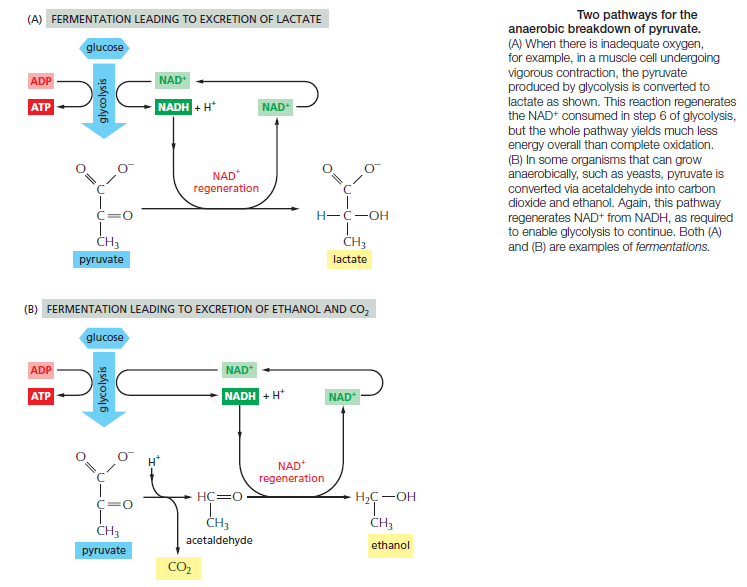 Studies of the commercially important fermentations carried out by yeasts inspired much of early biochemistry. Work in the nineteenth century led in 1896 to the then startling recognition that these processes could be studied outside living organisms, in cell extracts. This revolutionary discovery eventually made it possible to dissect out and study each of the individual reactions in the fermentation process. The piecing together of the complete glycolytic pathway in the 1930s was a major triumph of biochemistry, and it was quickly followed by the recognition of the central role of ATP in cell processes.

The formation of ATP during glycolysis provides a particularly clear demonstration of how enzymes couple energetically unfavorable reactions with favorable ones, thereby driving the many chemical reactions that make life possible. Two central reactions in glycolysis (steps 6 and 7) convert the three-carbon sugar intermediate glyceraldehyde 3-phosphate (an aldehyde) into 3-phosphoglycerate (a carboxylic acid), thus oxidizing an aldehyde group to a carboxylic acid group. The overall reaction releases enough free energy to convert a molecule of ADP to ATP and to transfer two electrons (and a proton) from the aldehyde to NAD+ to form NADH, while still liberating enough heat to the environment to make the overall reaction energetically favorable . 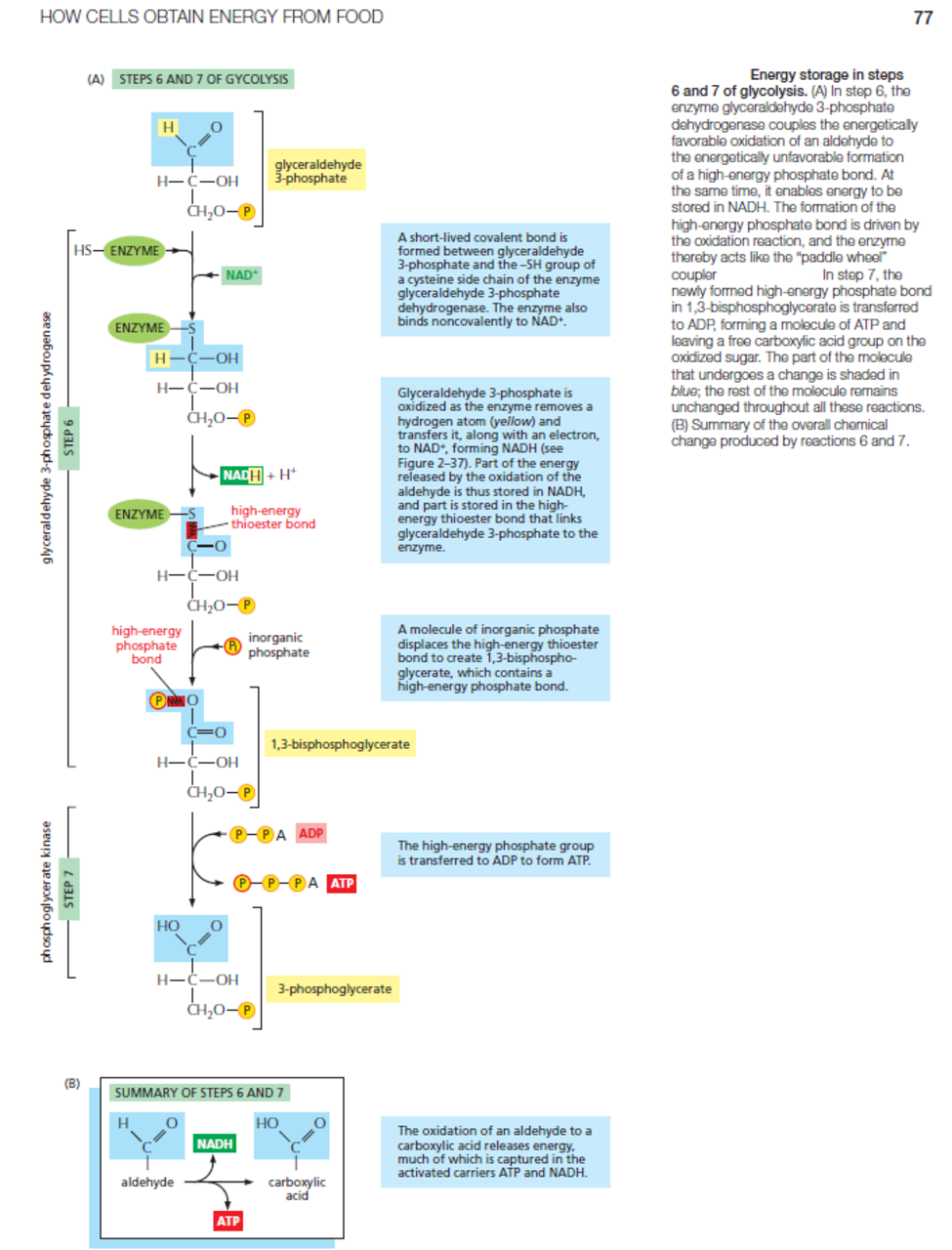 Energy storage in steps 6 and 7 of glycolysis. (A) In step 6, the enzyme glyceraldehyde 3-phosphate dehydrogenase couples the energetically favorable oxidation of an aldehyde to the energetically unfavorable formation of a high-energy phosphate bond. At the same time, it enables energy to be stored in NADH. The formation of the high-energy phosphate bond is driven by the oxidation reaction, and the enzyme thereby acts like the “paddle wheel” coupler, see below : 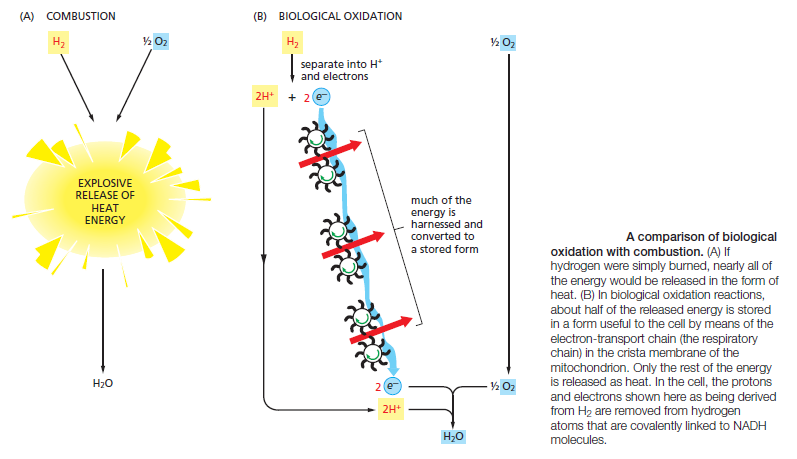 In step 7, the newly formed high-energy phosphate bond in 1,3-bisphosphoglycerate is transferred to ADP, forming a molecule of ATP and leaving a free carboxylic acid group on the oxidized sugar. The part of the molecule that undergoes a change is shaded in blue; the rest of the molecule remains unchanged throughout all these reactions. (B) Summary of the overall chemical change produced by reactions 6 and 7.

The figure above outlines this remarkable feat of energy harvesting. The chemical reactions are precisely guided by two enzymes to which the sugar intermediates are tightly bound. The first enzyme (glyceraldehyde 3-phosphate dehydrogenase) forms a short-lived covalent bond to the aldehyde through a reactive –SH group on the enzyme, and catalyzes its oxidation by NAD+ in this attached state. The reactive enzyme–substrate bond is then displaced by an inorganic phosphate ion to produce a high-energy phosphate intermediate, which is released from the enzyme. This intermediate binds to the second enzyme (phosphoglycerate kinase), which catalyzes the energetically favorable transfer of the high-energy phosphate just created to ADP, forming ATP and completing the process of oxidizing an aldehyde to a carboxylic acid. Note that the C–H bond oxidation energy in step 6 drives the formation of both NADH and a high-energy phosphate bond. The breakage of the high-energy bond then drives ATP formation. We have shown this particular oxidation process in some detail because it provides a clear example of enzyme-mediated energy storage through coupled reactions


We are interested in oxidation because it is the means by which chemotrophs such as humans meet their energy needs. Many different kinds of substances serve as substrates for biological oxidation. For example, a wide variety of microorganisms can use inorganic compounds such as hydrogen gas or reduced forms of iron, sulfur, or nitrogen as their energy sources. These organisms, which utilize rather specialized oxidative pathways, play important roles in the geochemical cycling of nutrients in the biosphere. They also produce a significant amount of biomass—by some estimates, 50% as much as global plant production—and they are important food sources for numerous other organisms in the food chain. However, we and most other chemotrophs depend on organic food molecules as oxidizable substrates, namely, carbohydrates, fats, and proteins. Keep in mind that oxidation of these organic food molecules produces energy for the cell as both ATP and reduced coenzymes.

To simplify our discussion initially and to provide a unifying metabolic theme, we will concentrate on the biological oxidation of the six-carbon sugar glucose . Glucose is a good choice for several reasons. In many vertebrates, including humans, glucose is the main sugar in the blood and hence the main energy source for most of the cells in the body. Blood glucose comes primarily from dietary carbohydrates such as sucrose or starch and from the breakdown of stored glycogen . Current guidelines recommend a diet of approximately 50% carbohydrate, 30% lipid, and 20% protein. Glucose is therefore an especially important molecule for you personally. Glucose is also important to plants because it is the monosaccharide released upon starch breakdown. In addition, glucose makes up one-half of the disaccharide sucrose (glucose + fructose), the major sugar in the vascular system of most plants. Moreover, the catabolism of most other energy-rich substances in plants, animals, and microorganisms alike begins with their conversion into
one of the intermediates in the pathway for glucose catabolism. Rather than looking at the fate of a single compound, then, we are considering a metabolic pathway that is at the
very heart of chemotrophic energy metabolism.

The Oxidation of Glucose Is Highly Exergonic

Glucose is a good potential source of energy because
its oxidation is a highly exergonic process, with a ΔG°¿ of
for the complete conversion of glucose to
carbon dioxide and water using oxygen as the final electron
acceptor:
C6H12O6 6O2 6CO2 6H2O (9-12)
As a thermodynamic parameter, ΔG°¿ is unaffected by the
route from substrates to products. Therefore, it will have
the same value whether the oxidation is by direct combustion,
with all of the energy released as heat, or by
biological oxidation, with some of the energy conserved as
ATP. Thus, oxidation of the sugar molecules in a marshmallow
will release the same amount of free energy
whether you burn the marshmallow over a campfire or eat
it and catabolize the sugar molecules in your body. Biologically,
however, the distinction is critical: Uncontrolled
combustion occurs at temperatures that are incompatible
with life, and most of the free energy is lost as heat. Biological
oxidations involve enzyme-catalyzed reactions that occur
without significant temperature changes, and much of the
free energy is conserved in chemical form as ATP.

Defending the Christian Worlview, Creationism, and Intelligent Design » Molecular biology of the cell » Metabolism » HOW CELLS OBTAIN ENERGY FROM FOOD