Defending the Christian Worldview, Creationism, and Intelligent Design » Molecular biology of the cell » Metabolism » Energy cycles, how did they "take off" ?

Energy cycles, how did they "take off" ?

Following biogeochemical Cycles are essential for advanced life on earth:

That creates a huge problem for origin of life scenarios. How did these cycle get "off the hook"?
https://courses.lumenlearning.com/suny-osbiology2e/chapter/biogeochemical-cycles/

My comment: This is a gigantic interdependent system, which, if one part of the cycle is missing, nothing goes.

That's why the origin of glucose is a huge problem, and one of the unanswered questions in origin of life research.

Ecology/Biogeochemical cycles
The most important biogeochemical cycles are the carbon cycle, nitrogen cycle, oxygen cycle, phosphorus cycle, and the water cycle. The biogeochemical cycles always have a state of equilibrium. The state of equilibrium occurs when there is a balance in the cycling of the elements between compartments. Ecologists may also be interested in the sulfur cycle, the nutrient cycle, and the hydrogen cycle; however, ecologists are more interested in studying the carbon, nitrogen, oxygen, phosphorus, and water cycles. 3 Odum (1959) describes what are called more or less "perfect" cycles: biogeochemical cycles that involve equilibrium states. That is, there exists in nature a balance in the cycling of the element between various compartments, with the element or material moving into abiotic compartments about as fast as it moves into biotic compartments. Certain ecosystems may experience "shortages", but overall a balance exists on a global scale.

Terrestrial nitrogen–carbon cycle interactions at the global scale
2013 Jul 5
The productivity of plants and soil organisms strongly depends on nitrogen. This fact leads to a tight coupling of the terrestrial nitrogen and carbon cycles.  Nitrogen availability plays an important role in controlling the productivity, structure and spatiotemporal dynamics of terrestrial ecosystems: perturbations in the nitrogen cycle will have repercussions in the carbon cycle, and vice versa. 2

The oxygen of Earth‟s atmosphere and oceans play a major role in the global biogeochemical nitrogen cycle.

P.A. Trudinger Biogeochemical Cycling of Mineral-Forming Elements 1979 page 25:
INTERDEPENDENCE OF BIOGEOCHEMICAL CYCLES
Since a large number of elements are essential for all, or at least some, of the components of the biosphere, it is obvious that the biogeochemical, cycles of these elements will be interdependent. Photosynthesis results in the evolution of 0xygen, and the incorporation of Carbon dioxide into the organic matter of living cells which, at the same time, incorporate nitrogen, sulfur, and phosphorus.Organic matter and O2 are used to drive independent cycles of sulfur, nitrogen, and carbon each of which requires the participation of phosphorus. The latter three cycles also regenerate carbon, sulfur, and nitrogen in the form required for the initial photosynthetic cell production. The five-element cycles are thus clearly interdependent and any change in one cycle will in the long term have a profound influence on the operation of the other four.
https://3lib.net/book/813057/eee886

Electrons, life and the evolution of Earth's oxygen cycle
2008 May 16
Fundamentally, life on Earth comprises six major elements, namely H, C, N, O, S and P.  The biogeochemical cycles of H, C, N, O, and S are coupled via biologically catalyzed electron transfer (redox) reactions. The early coevolution of the C, N and O cycles and the resulting non-equilibrium gaseous by-products can be used as a guide to search for the presence of life on terrestrial planets outside of our Solar System. These elements are the building blocks of all the major biological macromolecules including proteins, nucleic acids, lipids, and carbohydrates. The production of macromolecules requires an input of energy. The hallmark of biological energy transduction is non-equilibrium redox chemistry. Indeed, the evolution of life during the first half of Earth's history led to a network of electron transfer reactions that have driven fluxes of the first five of the ‘big six’ elements

Because all redox reactions are paired, the resulting network is a linked system of elemental cycles in which a forward reaction in one biogeochemical guild is complemented by a reverse reaction, usually, but not always, in another biogeochemical guild. The input of energy is almost exclusively derived from the Sun. For example, the reduction of inorganic carbon to organic molecules requires the addition of hydrogen and is endergonic. This reaction is catalyzed solely by chemoautotrophs and photoautotrophs, which use either the energy of preformed chemical bonds or light (the Sun) to drive the reduction reaction. The oxidation of organic molecules to inorganic carbon is catalyzed by heterotrophs, with the resulting liberation of energy. In some cases, the forward and reverse reactions can be catalyzed within the same biogeochemical guilds by altering either the mass balance or conditions of the reaction pathway. 1

The three main cycles of an ecosystem are the water cycle, the carbon cycle and the nitrogen cycle. These three cycles, working in balance, are responsible for carrying away waste materials and replenishing the ecosystem with the nutrients necessary to sustain life. If any of these three cycles should become unbalanced, the effects on the ecosystem can be catastrophic. 4 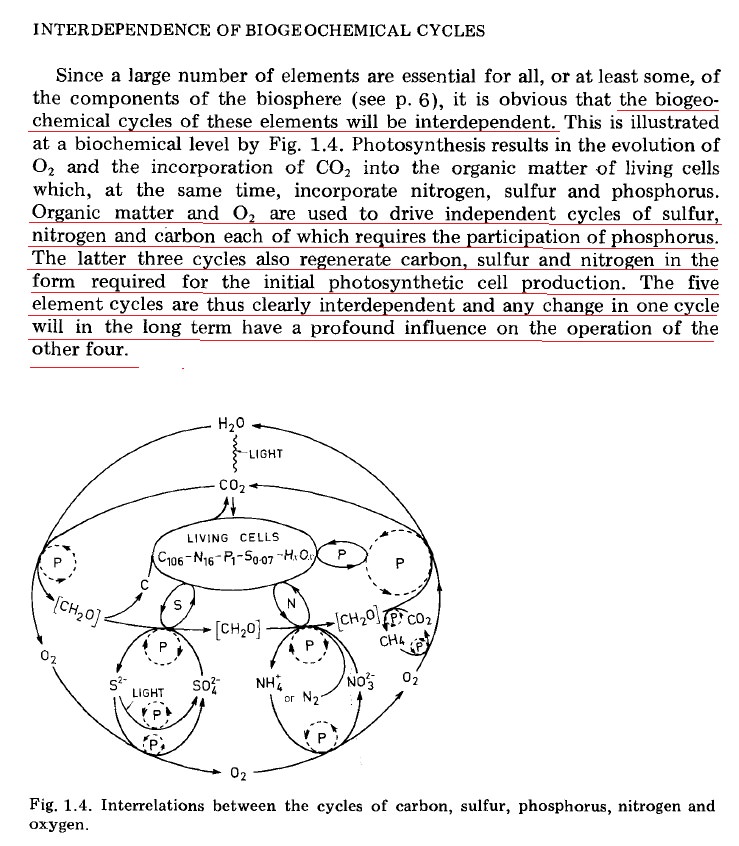 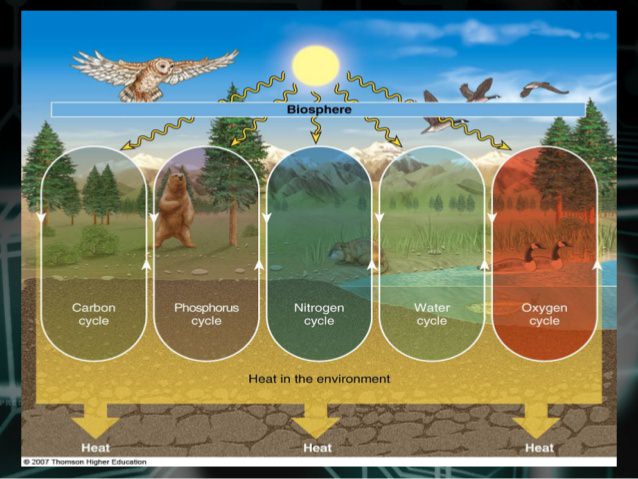 The nitrogen cycle, irreducible interdependence, and the origin of life
https://reasonandscience.catsboard.com/t1562-the-nitrogen-cicle-irreducible-interdependence-and-the-origin-of-life

Sulfur and the Sulfur cycle, essential for life
https://reasonandscience.catsboard.com/t2433-sulfur-essential-for-life

Glucose and its importance for life
https://reasonandscience.catsboard.com/t2158-glucose-and-its-importance-for-life

Where did Glucose come from in a prebiotic world ?
https://reasonandscience.catsboard.com/t2419-where-did-glucose-come-from-in-a-prebiotic-world

More:
Feedbacks Between the Nitrogen, Carbon and Oxygen Cycles
http://ocean.mit.edu/~mick/Papers/BermanFrank-etal-NitrogenBook-2008.pdf

Admin
Posts : 5997
Join date : 2009-08-09
Age : 54
Location : Aracaju brazil
Although the subsurface biosphere is devoid of light and is often extremely carbon and energy-limited, it is home to the vast majority of Earth’s microbes, as much as 90% by the most recent estimates.

Microbial metabolism is critical to the fixation, maintenance and turnover of carbon, nitrogen, and sulfur reservoirs in the subsurface biosphere.
Recent studies have shown that a high proportion of the organisms in the subsurface have yet to be cultured, known only by culture-independent genetic evidence such as metagenomic shotgun sequencing of whole genomic DNA.

In addition, newly identified microbial lineages are now commonly implicated in major geochemical cycles
It follows that there is substantial metabolic diversity yet to be discovered within the marine and terrestrial subsurface ecosystems.

To better describe and model the microbial networks that catalyze carbon, nitrogen, and sulfur cycling in the subsurface, we need to incorporate newly identified microbial lineages along with their metabolic capabilities.

Defending the Christian Worldview, Creationism, and Intelligent Design » Molecular biology of the cell » Metabolism » Energy cycles, how did they "take off" ?