In biology, histones are highly alkaline proteins found in eukaryotic cell nuclei that package and order the DNA into structural units called nucleosomes.They are the chief protein components of chromatin, acting as spools around which DNA winds, and play a role in gene regulation. Without histones, the unwound DNA in chromosomes would be very long (a length to width ratio of more than 10 million to 1 in human DNA). For example, each human cell has about 1.8 meters of DNA, (~6 ft) but wound on the histones it has about 90 micrometers (0.09 mm) of chromatin, which, when duplicated and condensed during mitosis, result in about 120 micrometers of chromosomes

Question: How did natural processes "figure out" to condense DNA into such an enormously tiny, highly regulated and functional structure? Why at all should they do that? 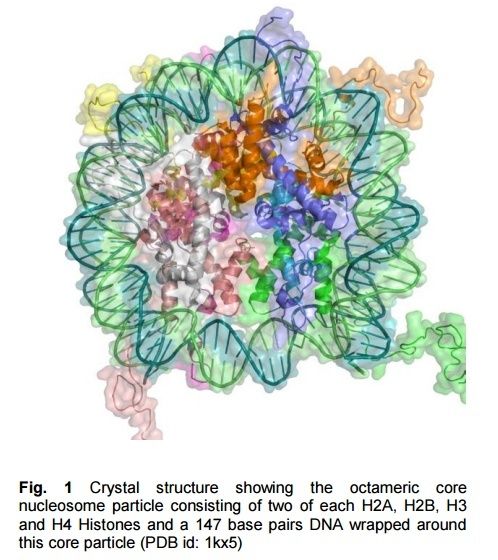 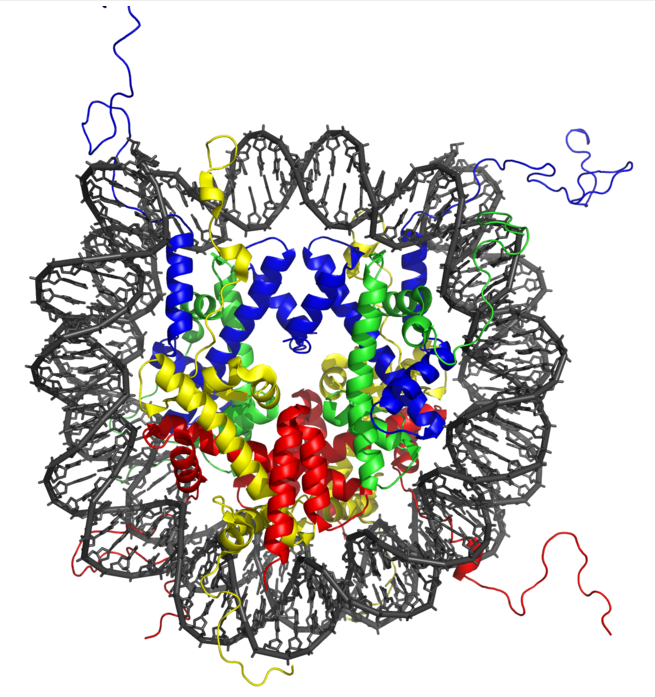 Histones are the major structural proteins of chromosomes. The DNA molecule is wrapped twice around a Histone Octamer to make a Nucleosome. Six Nucleosomes are assembled into a Solenoid in association with H1 histones. The solenoids are in turn coiled onto a Scaffold, which is futher coiled to make the chromosomal matrix. 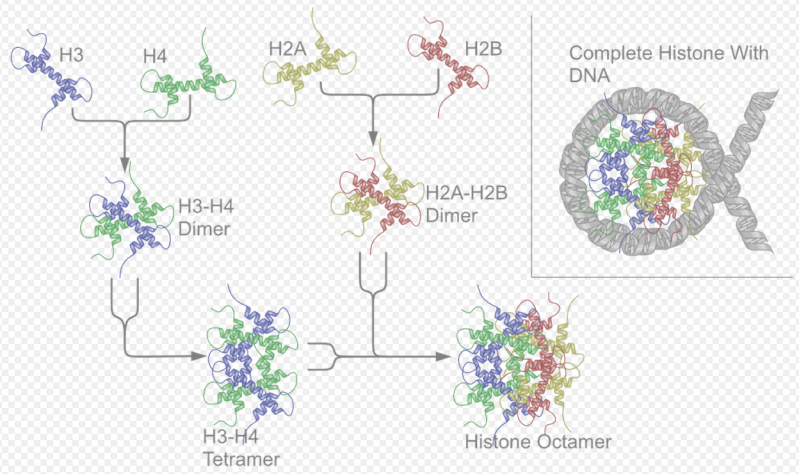 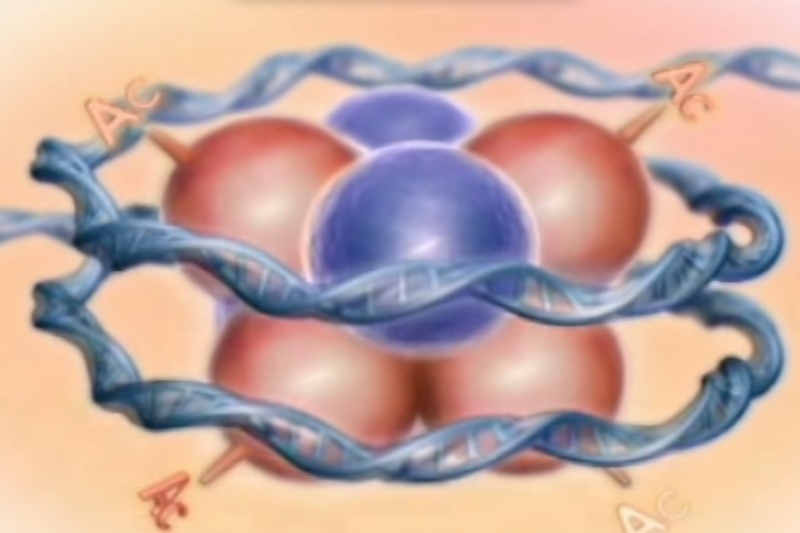 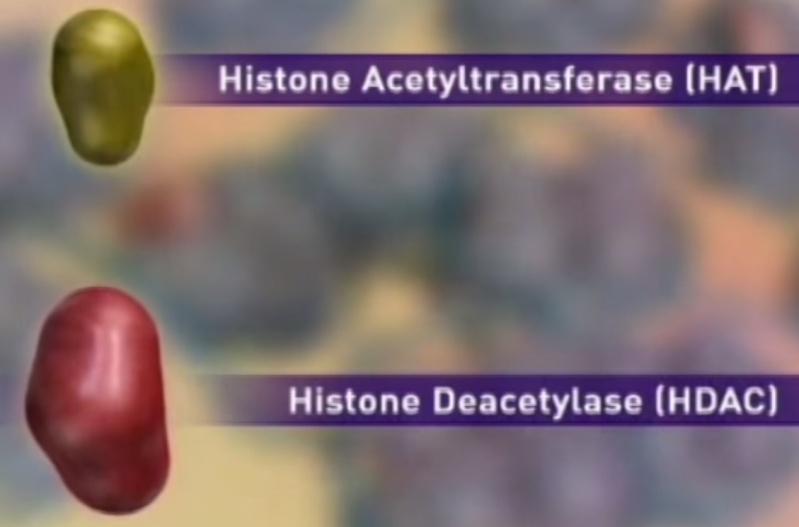 Histone acetyltransferases (HATs)
Histone acetyltransferases (HATs) are enzymes that acetylate conserved lysine amino acids on histone proteins by transferring an acetyl group from acetyl CoA to form ε-N-acetyllysine. DNA is wrapped around histones, and, by transferring an acetyl group to the histones, genes can be turned on and off. In general, histone acetylation increases gene expression.
In general, histone acetylation is linked to transcriptional activation and associated with euchromatin. When it was first discovered, it was thought that acetylation of lysine neutralizes the positive charge normally present, thus reducing affinity between histone and (negatively charged) DNA, which renders DNA more accessible to transcription factors. Research has emerged, since, to show that lysine acetylation and other posttranslational modifications of histones generate binding sites for specific protein–protein interaction domains, such as the acetyllysine-binding bromodomain.[citation needed] Histone acetyltransferases can also acetylate non-histone proteins, such as nuclear receptors and other transcription factors to facilitate gene expression.

Histone deacetylase ( HDAC )
Histone deacetylases  are a class of enzymes that remove acetyl groups (O=C-CH3) from an ε-N-acetyl lysine amino acid on a histone, allowing the histones to wrap the DNA more tightly. This is important because DNA is wrapped around histones, and DNA expression is regulated by acetylation and de-acetylation. Its action is opposite to that of histone acetyltransferase. HDAC proteins are now also called lysine deacetylases (KDAC), to describe their function rather than their target, which also includes non-histone proteins.

NucleosomeHistones are proteins that form a protective structure for the long DNA strand. Eight different histones form a nucleosome that looks like a yoyo with two different sides and a string wound around it. Nucleosomes are connected by a linker piece of DNA and many of these are built into other larger structures. 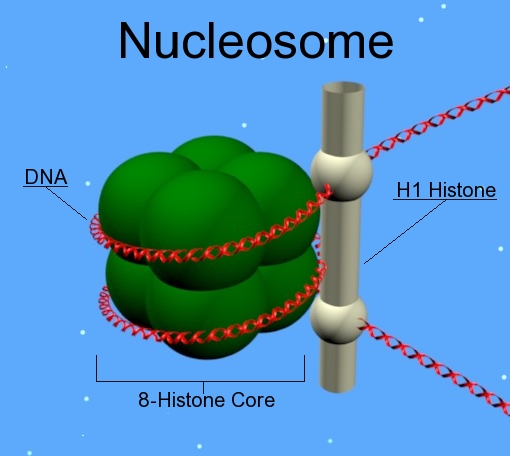 There are five families of histones. H1 and H5 are the linker types. H2A, H2B, H3 and H4 are the core types that make yoyo sides. Eight histones (two of each type) form a nucleosome. 147 base pairs of DNA are wrapped around each nucleosome. 50 base pairs connect one nucleosome with another using linker histones binding at the entry and exit. Linked together, the string of nucleosomes forms the larger structures. 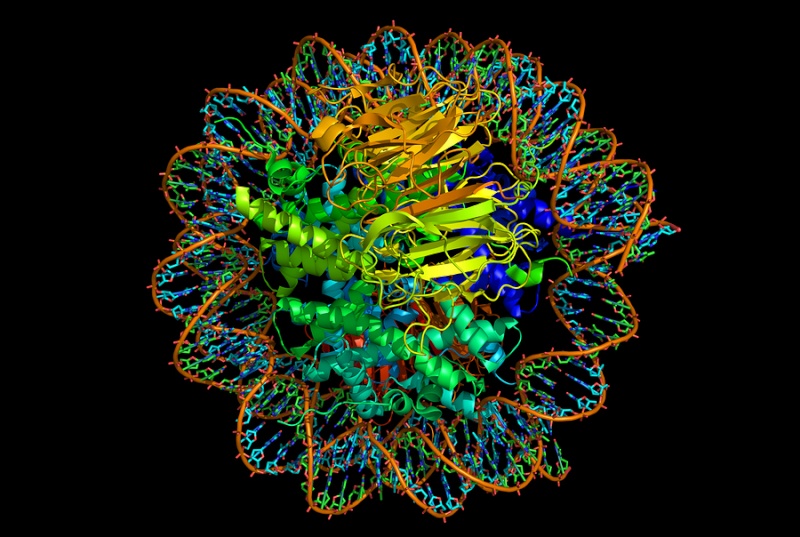 H3 and H4 histones have long tales that are places for epigenetic markings at several different sites. These markings use modification by acetylation, methylation, phosphorylation, ubiquitination, SUMOylation, citrullination and ribosylation. Even the core subunits can be modified in different ways. Each modification or marking alters the function of genes directly near them. All of the markings form a vast “histone code.” Modifications are critical for DNA repair mechanisms, regulation of gene networks and the shapes of chromosomes. Many of these markings are, also, inherited by the next generation. Very recent research shows that methylation during development forms the female brain.

Biochemists have recently discovered another code associated with DNA  that overlaps the genetic code and plays a key role in gene expression. The rules that define this overlying code are manifested through interactions between DNA and the DNA-binding proteins known as histones. These globular-shaped proteins organize DNA into chromosomes. In eukaryotes, the DNA molecules found inside the cell's nucleus exist in the form of chromosomes. Each of these highly condensed structures consists of one molecule of DNA associated with a larger number of histone proteins. Histones bind to the DNA at regular intervals along the length of the double helix. Biochemists have identified five different histone proteins—referred to as H1, H2A, H2B, H3, and H4. Two copies each of the histones H2A, H2B, H3, and H4 interact to form a disk-shaped complex composed of eight protein subunits (an octamer). This octamer complex is also known as the histone core. 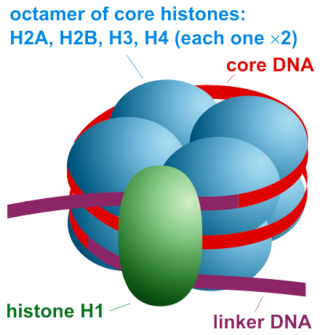 The Histone Octamer  Histones bind to the DNA at regular intervals along the length of the double helix. Biochemists have identified five different histone proteins, referred to as H1, H2A. H2B, H3, and H4. Two copies each of the histones H2A, H2B, H3. and H4 interact to form a disk-shaped complex  composed of eight protein subunits called the  histone core. Histone H1 binds in the linker region between the histone octamers.

At each histone-binding site, the DNA double helix winds around the histone core, sort of like a thread around a spool. Unlike that thread, however, that seems to wind around the spool an endless number of times, the DNA strand wraps around the core only about two-and-one-half full turns. These turns consist of a sequence of about 150 nucleotides. The complex between the DNA double helix and the histone octamer is a nucleosome . Nucleosomes form the fundamental organizing structure of chromosomes. For each chromosome, nucleosomes occur repeatedly along the length of the DNA molecule to form a supra-molecular structure that resembles a string of beads when viewed with an elec- tron microscope. A piece of linker DNA, which varies between about fifteen and fifty-five nucleotides in length, connects the nucleosomes to each other. In turn, the nucleosomes interact with one another by coiling the "beaded necklace" to form a solenoid. Histone H1 mediates the interactions between the nucleosomes to assemble the solenoid, which further condenses to form higher order structures that comprise the chromosome proper.

The association of DNA with histones plays an important role in regulating gene activity and other important processes like DNA repair. When the DNA double helix wraps around the histone core, the cell's biochemical machinery can't physically get to the genes, blocking transcription, for example. It's critical that the initiation sites for transcription (promoter sites) reside in the linker regions away from the nucleosomes, so that proteins like RNA polymerase can bind to these DNA regions . Recent studies on the yeast genome indicate that this organization is often the case with nucleosomes positioned to render promoter DNA sequences readily accessible in linker DNA regions. The careful positioning of nucleosomes along the DNA molecule typifies the elegant structural and functional logic that pervades many of the cell's biochemical systems. And this elegance points to the intentional handiwork of a Creator. So, too, does another study. Researchers from The Weizmann Institute of Science (Israel) demonstrated that histones prefer to bind to specific nucleotide sequences. These sequences impart the DNA double helix with the propensity to bend. This useful property allows the DNA molecule to wrap around the histone core.  Most importantly, the research team demonstrated that the sequence specificity of histone binding to DNA constitutes a code within the genome that dictates the precise positioning of nucleosomes along the DNA molecule. The nucleosome-positioning codes repeat every ten nucleotides along the DNA double helix at the binding site for the histone core. Using this newly discovered code, the scientists from The Weizmann Institute could successfully predict the location of nucleosomes along the length of a DNA molecule. As with the genetic code, the histone-positioning code suggests the work of an Intelligent Programmer. A code must be deliberately designed. Even more remarkable is the requirement for the genetic and the histone-positioning codes to work in concert with one another. The histone-positioning code overlays the genetic code. These two codes must establish the relationship between the nucleotide sequences of DNA and the amino acid sequences of proteins. At the same time they must precisely position nucleosomes to ensure the proper expression of the information defined by the genetic code. Foresight and careful planning (the work of an Intelligent Agent) are necessary to get these two codes to work together. If haphazardly constructed, they could easily conflict, disrupting key processes within the cell. Remarkably, the universal genetic code is constructed to harbor overlapping or parallel codes better than the vast majority of other possible genetic codes.

The researchers, in a study published in Science, used biochemical experiments and cryo-electron microscopy (cryo-EM) to determine the atomic structure of a complex assembly of molecules known as the histone mRNA three-prime (3') end-processing machine. This machine plays a fundamental role in proper activity and duplication of the cell genome and when defective, it may lead to human diseases, including cancers. 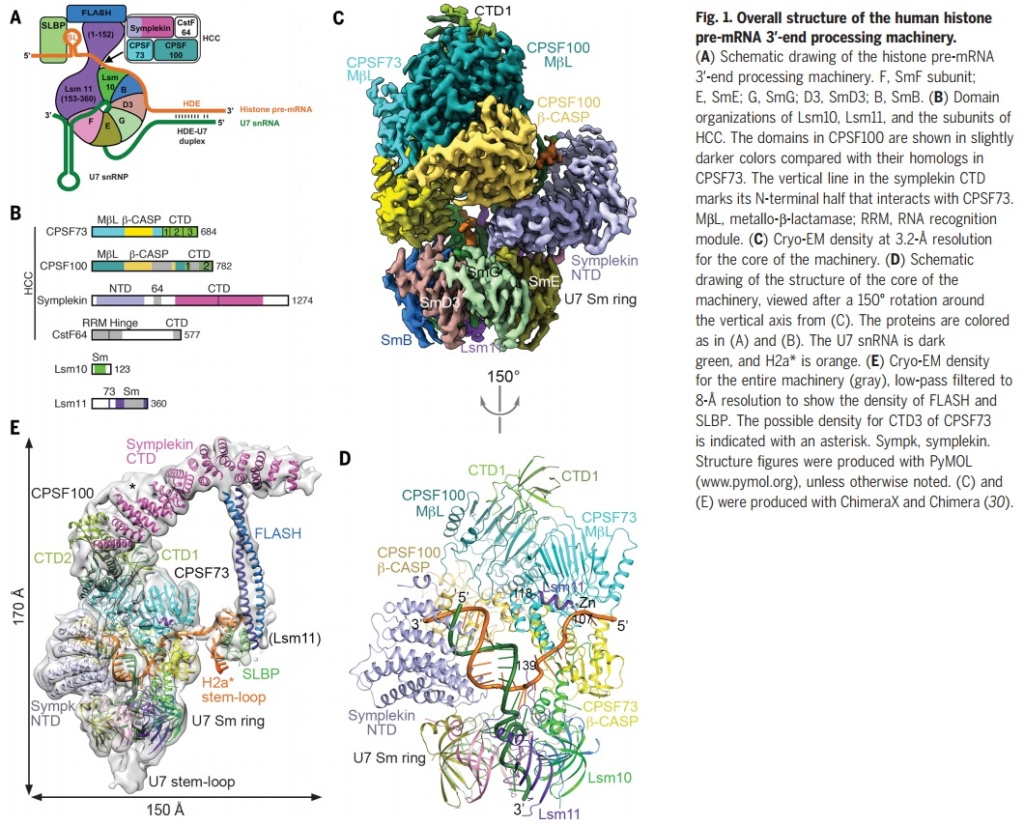 Re: Histones function and design