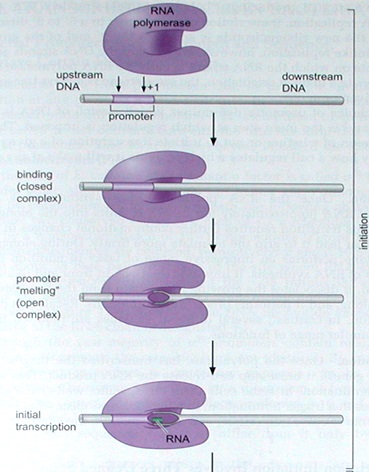 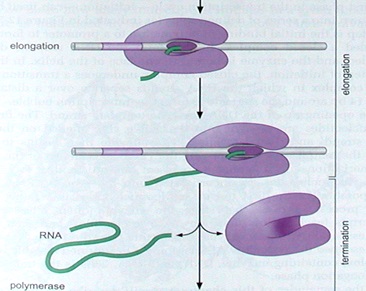 Appreciable advances into the process of transcript elongation by RNA polymerase II (RNAP II) have identified this stage as a dynamic and highly regulated step of the transcription cycle. Elongation is highlighted as a central process that coordinates multiple stages in mRNA biogenesis and maturation. 1

The regulation of gene expression is one of the most intensely studied areas in all of science.

In this review, we focus mainly on the regulation of transcript elongation and how this stage of the transcription cycle is central to the integration and coordination of multiple events during transcription.

The generation of a mature mRNA molecule by RNAP II involves multiple processes, some of which occur sequentially and others in parallel.

The primary phases of transcript generation form a so-called transcription cycle and include preinitiation, initiation, promoter clearance, elongation, and termination.

The transcription cycle starts with preinitiation complex (PIC) assembly at the promoter. The PIC includes the general transcription factors (GTFs) IID, IIB, IIE, IIF, and IIH and RNAP II, as well as several additional cofactors . Formation of an open complex between RNAP II and the DNA template is a prerequisite for transcription initiation. Melting of the double-stranded DNA into a single-stranded bubble is an ATP-dependent process and requires the action of two GTFs, IIE and IIH. Once the open complex is established, transcription initiation occurs upon addition of the two initiating nucleoside triphosphates (NTPs) dictated by the DNA sequence and formation of the first phosphodiester bond. The presence of all NTPs allows RNAP II to clear the promoter, although ATP appears to be particularly important for the transition from initiation to elongation. Before RNAP II becomes engaged into productive transcript elongation, it must pass through a stage known as promoter clearance

Picture below: The phosphorylation cycle of the CTD ( C-terminal domain ) of the large subunit of RNAP II. Initially, the unphosphorylated RNAP II CTD is targeted on Ser 5 by the kinase activity of the Kin28 subunit of TFIIH. Early after transcription initiation, the TEC is arrested at a “checkpoint” (see Fig. 3), to ensure proper pre-mRNA capping. Release from this checkpoint involves the kinase action of P-TEFb (Bur1/2 or Ctk1 in yeast), which targets Ser 2 on the CTD. Subsequently during elongation, protein phosphatases dephosphorylate Ser 5 residues (presumably, see text) within the CTD. The precise details surrounding the identity of the phosphatases and the specific residues that are targeted are not clear. However, the Ser 5-specific phosphatase Ssu72 is involved in allowing the correct transcript cleavage necessary for efficient termination. Both Ssu72 and the FCP1 phosphatase, which also targets Ser 5, are involved in recycling the RNAP II for reinitiation and subsequent rounds of transcription, although the specifics of recycling are currently unknown.

CTD ( C-terminal domain )
RNA Pol II in action, showing the CTD extension to the C-terminal of POLR2A. 2
The carboxy-terminal domain (CTD) of RNA polymerase II is that portion of the polymerase that is involved in the initiation of DNA transcription, the capping of the RNA transcript, and attachment to the spliceosome for RNA splicing.[13] The CTD typically consists of up to 52 repeats of the sequence Tyr-Ser-Pro-Thr-Ser-Pro-Ser.[14] The carboxy-terminal repeat domain (CTD) is essential for life. Cells containing only RNAPII with none or only up to one-third of its repeats are inviable.[15]
The CTD is an extension appended to the C terminus of RPB1, the largest subunit of RNA polymerase II. It serves as a flexible binding scaffold for numerous nuclear factors, determined by the phosphorylation patterns on the CTD repeats. Each repeat contains an evolutionary conserved and repeated heptapeptide, Tyr1-Ser2-Pro3-Thr4-Ser5-Pro6-Ser7, which is subjected to reversible phosphorylations during each transcription cycle.[16] This domain is inherently unstructured yet evolutionarily conserved, and in eukaryotes it comprises from 25 to 52 tandem copies of the consensus repeat heptad.[15] As the CTD is frequently not required for general transcription factor (GTF)-mediated initiation and RNA synthesis, it does not form a part of the catalytic essence of RNAPII, but performs other functions