Defending the Christian Worlview, Creationism, and Intelligent Design » Theory of evolution » The transition of fish from Water to Land Dilemma

The transition of fish from Water to Land Dilemma

If neo-Darwinians believe the story gets easier outside the cell, they have deluded themselves. Evolving from gills to lungs is only easy in the pages of biology textbooks. For instance, air-breathing would require fish to be closer to the surface of the water, making them a great deal more vulnerable for predation. It has been documented that deep water species have fewer injuries and lower rates of disappearance than fish in shallow water . So would adapting to air-breathing be considered “survival of the fittest”? Additionally, it has not been documented that fish can evolve a new means of respiration if placed into an environment that has too little oxygen—for instance, a stagnant pond or drying lake. Consider the critical necessity of a fish in that situation. It would be required not only to evolve the new respiratory structure within its lifetime, but it must also be able to pass this new structure on to its offspring before dying of asphyxia. If true, this evolutionary survival tactic should be easily documented in a laboratory setting, where oxygen levels in the water can be manipulated at will. And yet, decades have passed without even a hint of evidence to support this theory. 3

The Kidney Barrier
Fish release harmful byproducts in their bodies directly into the water. Terrestrial animals, however, need kidneys. Therefore, any animal that makes the transition from water to land requires kidneys before making the change. However, kidneys have a highly complex structure. Moreover, a kidney has to be fully formed and flawless if it is to function. Only 50%, or 70% or even 90% of a kidney will serve no purpose. Since the theory of evolution is predicated on the idea that organs that are not used disappear over time, a kidney that is 50% lacking will be eliminated from the body at the first stages of evolution. 1

According to the theory of evolution, life began in the seas, and the first advanced vertebrate animals were fish. Again according to the theory, these fish began to move toward dry land and in some way, came to use feet instead of fins and lungs instead of gills!
Many books on evolution never consider the how of this major claim, whose baselessness is glossed over in most scientific textbooks in some summary like ". . . and living things moved from the water to dry land."
If one fish that moved out of the water onto dry land couldn't survive for longer than a minute or two, then any of the other fish that did so would also die within a few minutes. Even if fish kept making the same attempts for millions of years, the end result would always be the same: All the fish would die. No organ as complex as the lung can emerge suddenly, by way of mutation. Yet a half-lung would serve no purpose at all.
Both fossil findings and physiological studies totally disprove the claim that fish are the ancestors of terrestrial animals. The huge anatomical and physiological differences between marine and terrestrial animals cannot possibly be bridged by gradual evolution based on chance. Among the most evident of these differences:

1) Weight bearing: Marine creatures do not face the problem of having to support their own weight, so their bodily structures are not directed towards such a function. Those living on land, however, expend 40% of their energy just in moving around. Any water dweller about to pass onto dry land needs to develop new muscles and a new skeletal structure to meet that need-but it is impossible for such complex structures to form through random mutations.

Evolutionists imagine the coelacanth and other similar fish to be the ancestors of terrestrial animals because of the bony nature of their fins. They assume that these bones gradually developed into weight-bearing feet. Yet unlike the feet of land dwellers, the bones in a fish's fins are not connected directly to their backbone. This means they cannot perform a weight- bearing function, as do the leg bones in terrestrial animals. Therefore, the claim that these fins slowly evolved into feet is groundless.

2) Heat protection: On land, temperatures can change very fast and within a wide range. A terrestrial animal's metabolism allows it to adapt to these temperature changes in. In the sea, however, temperatures change very slowly, and do not range as widely as on land. A creature accustomed to the sea's even temperatures therefore needs to acquire a protective system appropriate to the temperature swings on land. It would be ridiculous to claim that fish acquired such a system through random mutations as soon as they emerged onto dry land.

3) Use of water: Water is an essential requirement for living things, and on land, its availability is limited. For that reason water, and even moisture, must be used economically. For example, skin must prevent water loss and evaporation, and land dwellers must be able to feel thirst when they need water. Yet underwater creatures have no sense of thirst and their skins are not suited to a dry environment.
4) Kidneys: Due to the abundant water in their environment, marine creatures can immediately filter and expel their bodies' waste products, particularly ammonia. On land, however, water must be used at minimum levels. For that reason these living things have kidneys, thanks to which ammonia is filtered out as urea and stored in the bladder, and the minimum amount of water is used when it is expelled. In addition, there is a need for new systems that enable the kidneys to function. In order for a transition from water to land, creatures without kidneys will need to develop them immediately.

5) Respiratory system: Fish breathe the oxygen dissolved in water through their gills. Out of the water, however, they are unable to survive for more than a few minutes. In order to live on dry land, they need to acquire a pulmonary system.
It is of course impossible for all these physiological changes to take place by chance and all at the same time.
According to the evolutionist scenario, fish first evolved into amphibians. Yet there is no evidence for that scenario: Not a single fossil has been found to show that half-fish, half-amphibian creatures ever existed.

an animal with half lungs or kidneys, can be thought as a transitional link between sea and land animals. However, the salamander fish which is an amphibian or the frog that spends half of its life in sea and other half on land, are never named as transitional links. The systems and living habits of these creatures reflect an original and fixed form, not a "transitional" one. 2

William K. Gregory (1876–1970)
Our Face from Fish to Man: A Portrait Gallery of our Ancient Ancestors and Kinsfolk Together with a Consise History of our Best Features
New York, London: G. P. Putnam’s Sons, 1929

Written in the aftermath of legislation outlawing the teaching of evolution in some American states, this book exploits the fascination of transatlantic readers with their own faces to draw them into a sophisticated account of the development of the vertebrate head. The author, a leading naturalist at the American Museum of Natural History in New York, ends by speculating on what the face of the white race will look like in a million years if attempts at eugenic purification are successful. 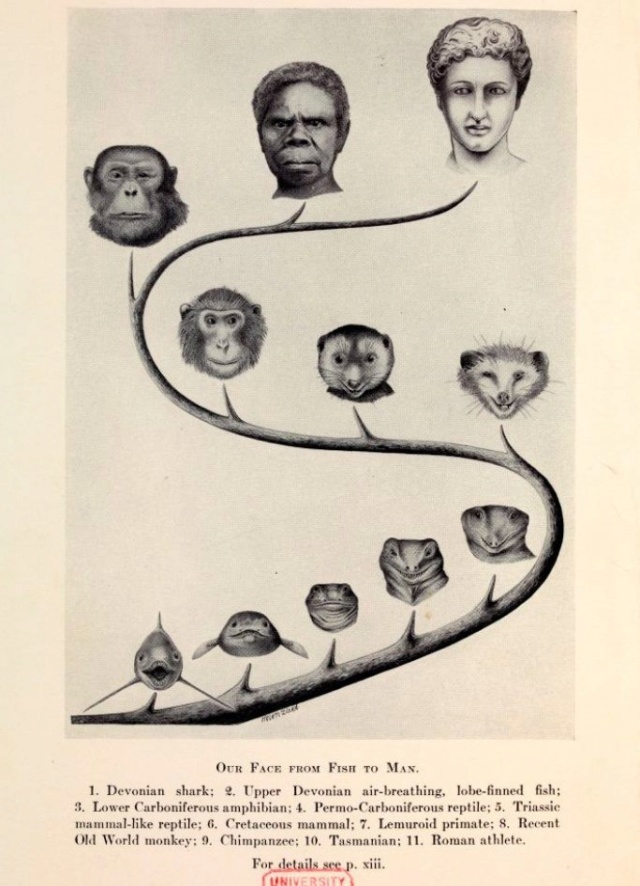 Defending the Christian Worlview, Creationism, and Intelligent Design » Theory of evolution » The transition of fish from Water to Land Dilemma