Intelligent Design, the best explanation of Origins » Molecular biology of the cell » The telomerase enzyme

The Ends of Eukaryotic Chromosomes Are Replicated by Telomerase

Linear eukaryotic chromosomes contain telomeres at both ends. The term telomere refers to the complex of telomeric sequences within the DNA and the special proteins that are bound to these sequences. Telomeric sequences consist of a moderately repetitive tandem array and a 3ʹ overhang region that is 12 to 16 nucleotides in length (Figure below ).

General structure of telomeric sequences. The telomere DNA consists of a tandemly repeated sequence and a 12- to 16-nucleotide overhang.

The tandem array that occurs within the telomere has been studied in a wide variety of eukaryotic organisms. A common feature is that the telomeric sequence contains several guanine nucleotides and often many thymine nucleotides 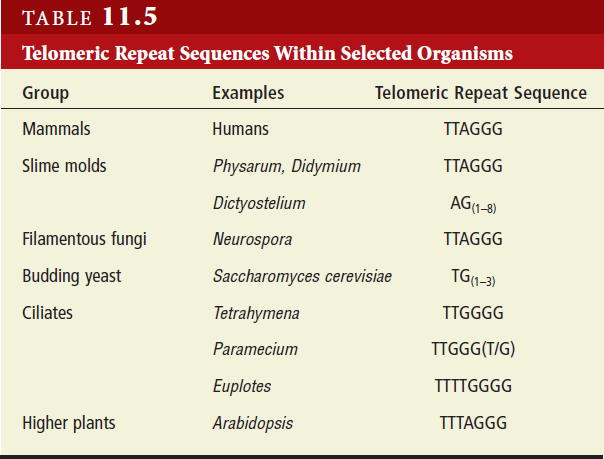 Depending on the species and the cell type, this sequence can be tandemly repeated up to several hundred times in the telomere region. One reason why telomeric repeat sequences are needed is because DNA polymerase is unable to replicate the 3ʹ ends of DNA strands. Why is DNA polymerase unable to replicate this region? The answer lies in the two unusual enzymatic features of this enzyme.  DNA polymerase synthesizes DNA only in a 5ʹ to 3ʹ direction, and it cannot link together the first two individual nucleotides; it can elongate only preexisting strands. These two features of DNA polymerase function pose a problem at the 3ʹ ends of linear chromosomes. As shown in Figure below , the 3ʹ end of a DNA strand cannot be replicated by DNA polymerase because a primer cannot be made upstream from this point. Therefore, if this problem were not solved, the chromosome would become progressively shorter with each round of DNA replication. 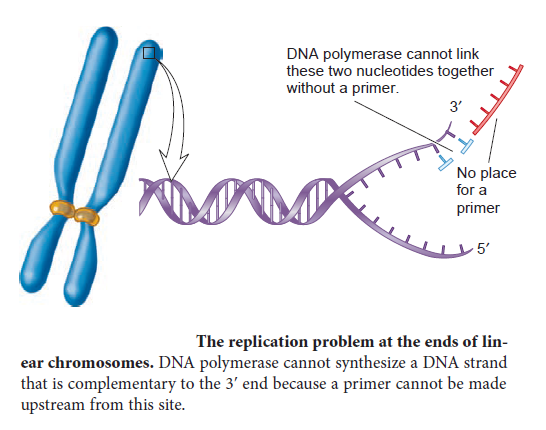 To prevent the loss of genetic information due to chromosome shortening, additional DNA sequences are attached to the ends of telomeres. In 1984, Carol Greider and Elizabeth Blackburn discovered an enzyme called telomerase that prevents chromosome shortening. It recognizes the sequences at the ends of eukaryotic chromosomes and synthesizes additional repeats of telomeric sequences. They received the 2009 Nobel Prize in physiology or medicine for their discovery. Figure below shows the interesting
mechanism by which telomerase works.

Question : If there was endosymbiosis, or the transition from prokaryotic to eukaryotic cells, then there must have been also a transition from prokaryotic to eukarytic dna replication.  In order to prevent chromosome shortening, telomerase had to arise together with linear DNA. How could that have been coordinated ? If telomerase emerged before linear DNA, there was no job for the enzyme. If it emerged afterwards, chromosomes would shorten without prevention, and the cell would die. 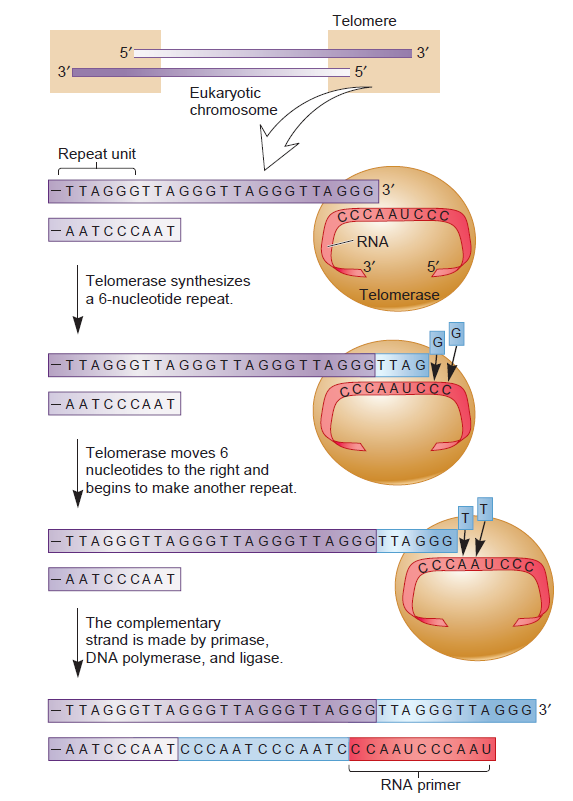 The enzymatic action of telomerase. A short, three-nucleotide segment of RNA within telomerase causes it to bind to the 3ʹ overhang. The adjacent part of the RNA is used as a template to make a short, six-nucleotide repeat of DNA. After the repeat is made, telomerase moves six nucleotides to the right and then synthesizes another repeat. This process is repeated many times to lengthen the top strand shown in this figure. The bottom strand is made by DNA polymerase, using an RNA primer at the end of the chromosome that is complementary to the telomeric repeat sequence in the top strand. DNA polymerase fills in the region, which is sealed by ligase.

This is a highly coordinated complex process, which requires several sequential steps. How did unguided evolutionary mechanisms produce this enzyme, which would have only function if fully operational ?

The telomerase enzyme contains both protein subunits and RNA. The RNA part of telomerase contains a sequence complementary to the DNA sequence found in the telomeric repeat. This allows telomerase to bind to the 3ʹ overhang region of the telomere. Following binding, the RNA sequence beyond the binding site functions as a template allowing the synthesis of a six-nucleotide sequence at the end of the DNA strand. This is called polymerization, because it is analogous to the function of DNA polymerase. It is catalyzed by two identical protein subunits called telomerase reverse transcriptase (TERT) . TERT’s name indicates that it uses an RNA template to synthesize DNA. Following polymerization, the telo merase can then move—a process called translocation—to the new end of this DNA strand and attach another six nucleotides to the end. This binding-polymerization-translocation cycle occurs many times in a row, thereby greatly lengthening the 3ʹ end of the DNA strand in the telomeric region. The complementary strand is then synthesized by primase, DNA polymerase, and DNA ligase, as described earlier in this chapter.

Intelligent Design, the best explanation of Origins » Molecular biology of the cell » The telomerase enzyme