Cell signaling & the origin of life

Arathi Nair (2019): Life started with unicellular forms having a limited number of genes and proteins. As a result, cell signaling was less complex. 1 Yves Combarnous (2020): Cellular communications play pivotal roles in uni-cellular species. Moreover, cells communicate within the same individual, but also with cells in other individuals belonging to the same or other species. The molecular mechanisms involved exhibit diversity and specificity, but they share common basic features, which allow common pathways of communication between different species, often phylogenetically very distant. These interactions are possible by the high degree of conservation of the basic molecular mechanisms of interaction of many ligand–receptor pairs in evolutionary remote species.  It is likely that communications between cells did not arise after their emergence, but were part of the very nature of the first cells. Synchronization of populations of non-living protocells through chemical communications may have been a mandatory step towards their emergence as populations of living cells and explain the large commonality of cell communication mechanisms among microorganisms, plants, and animals. Unicellular species have been prosperous for approximately 3.5 billion years and still represent the vast majority of living species. They can communicate indirectly through soluble mediators to regulate their growth and/or phenotype according to the available food resources. All intercellular communications rely on intercellular messengers (mediators) and their cognate receptors in their target cells. The receptors play pivotal roles as they connect intercellular communications to downstream intracellular signaling. Despite the considerable diversity of communications among living species, the number of receptor types and transduction mechanisms is somewhat limited, suggesting their conservation during the Evolution. Cell communications occur not only inside multicellular species, but also in unicellular species, as well as between different species, whether unicellular and/or multicellular.2

Kirsten Jung: (2018):  Every living cell possesses numerous transmembrane signalling systems that receive chemical and physical stimuli from the environment and transduce this information into an intracellular signal that triggers some form of cellular response. As unicellular organisms, bacteria require these systems for survival in rapidly changing environments. The receptors themselves act as ‘sensory organs’, while subsequent signalling circuits can be regarded as forming a ‘neural network’ that is involved in decision making, adaptation and ultimately in ensuring survival. Bacteria constantly interact with their surroundings. They identify and actively acquire nutrient resources, sense and respond to environmental stresses and exchange information with other cells, while commensals and pathogens adapt their lifestyles for survival in their hosts. The cytoplasmic (inner) membrane of bacterial cells separates the cytoplasm from the outer world. Therefore, all information from the outside must be transferred across this interface, which contains various sensors that carry out this function. 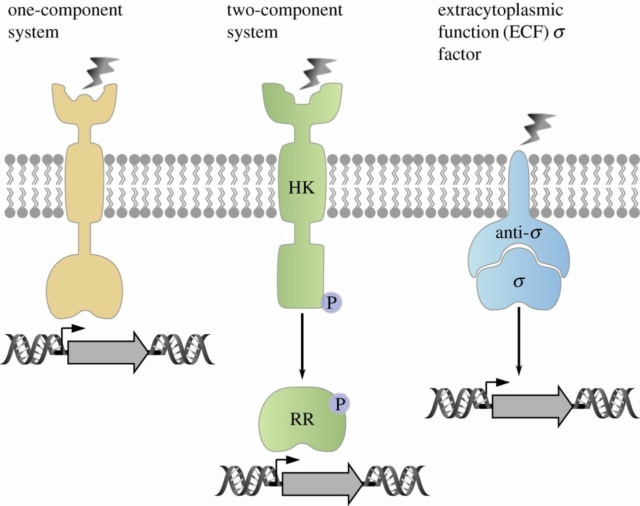 » Panspermia, not a viable explanation for the OOL
» The cell membrane , and origin of life scenarios
» What are the critical questions that any origin of life science must answer to explain the origin of life?
» The complexity of transcription through RNA polymerase enzymes and general transcription factors in eukaryotes
» Wanna Build a Cell? A DVD Player Might Be Easier