1. The cell has a sophisticated information-processing system. It is not only analogous to a man-made computer but operates literally as a computer.
2. Computer programs require programmers, conscious agents with knowledge and foresight who can code the needed instructions, in the right sequence, to generate a functioning and information-rich program.
3. Since cells contain an information storage system (DNA), a code language (the genetic code), and instructions encoded through the genetic code stored in DNA, and an information transmission system, that is 1. Encoding ( transcription into messenger RNA (mRNA) through RNA polymerase enzyme catalysts (transcription), 2.  Sending (mRNA), and 3. Translation (mRNA to amino acids through the Ribosome), all this requires a programmer. The programmer is with high probability an intelligent designer (God).

DNA in the living cell is a computing environment that can usefully be described, understood, and studied using computer terminology.  It has all the elements we use in programming to do things. DNA really is digital, 2 bits per nucleotide, 100 megabytes of DNA for the puffer fish, 750MB for a human being, 5 kilobytes for a virus 2

How the DNA Computer Program Makes You and Me 1
Embryogenesis most resembles a genetic computer program that produces a three-dimensional living organism. Every gene is like a single line of code. All the genes together form the master DNA program, which is copied and run simultaneously in trillions of cells to achieve this miracle of physicochemical engineering. Genes, along with their promoters, regulators and inhibitors, perform all the control operations that software programs do. Just as a single line of software code may initiate sweeping changes or be merely incremental, a single top-level gene may initiate the building of an entire body or organ (analogous to a top-level line that invokes a subroutine “MakeEye”) or may merely add a small building block molecule in a tissue (like the line n = n + 1). Our genetic program does amazing things like generating its own building materials programmatically. The genetic program uses parallel coordination techniques that have only recently been explored in software, such as “swarm programming.”  Swarm programming is a paradigm in which a group of cells or robots that contain identical copies of a master program nevertheless behave differently based on their location within the group and on how their neighbors are distributed.
https://www.quantamagazine.org/how-the-dna-computer-program-makes-you-and-me-20180405/

These alterations in the genome size occurred right at the first generation of amphidiploids, revealing the rapidity of the event. They suggest that these alterations, observed after allopolyploidization and without additive effect on the genome size, represent a pre-programmed adaptive response to the genomic stress caused by hybridization, which might have the function of stabilizing the genome of the new cell.
https://www.scielo.br/scielo.php?pid=S1413-70542003000100003&script=sci_arttext

The evolution of the temporal program of genome replication
In yeast, active origins are distributed throughout the genome at non-transcribed and nucleosome-depleted sequences and comprise a specific DNA motif called ARS consensus sequence which is bound by the Origin Recognition Complex throughout the cell cycle 4–6. Despite of this partially pre-programmed replication activity, different cells in a population may use different subsets of active origins.
https://www.biorxiv.org/content/10.1101/210252v1.full

Learn about behaviors that are pre-programmed into an animal's genes, including reflexes and fixed action patterns.
https://www.khanacademy.org/science/ap-biology/ecology-ap/responses-to-the-environment/a/innate-behaviors

A number of theories have been generated to account for this spatial heterogeneity, including a zonated response to spatial gradients, or an internal clock where epithelial cells are pre-programmed to express different functional genes.
https://www.epistem.co.uk/spotlight/Lgr5-telocytes-signalling-source

The cells of the human body are governed by a set of pre-programmed processes, known as the cell cycle, which determines how cells progress and divide.
https://www.news-medical.net/life-sciences/The-Role-of-Cell-Division-in-Tumor-Formation.aspx

CRISPR (again, shorthand for CRISPR-Cas9), utilizes the Cas9 enzyme, a naturally produced protein in cell types built for DNA splicing, to “unzip” these chained nucleotides at a specific spot and then replace the nucleotide chain with the one attached. The location is based on pre-programmed information in the enzyme—essentially it floats around inside the nucleus until it finds the correct spot, then gets to work.
https://nanocellect.com/blog/using-crispr-technology-to-engineer-genetically-modified-cell-lines/

What are telomeres?
Are our cells just following a pre-programmed biological timetable regardless of any other factors? Most likely it’s a combination of all of these, plus some other causes we haven’t yet discovered.
https://www.science.org.au/curious/people-medicine/what-are-telomeres 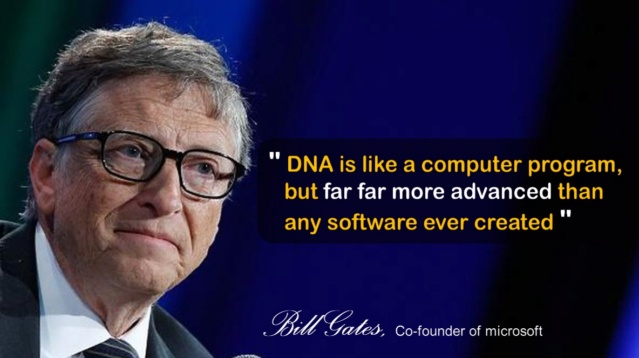 » Unicellular and multicellular Organisms are best explained through design
» Proof of an afterlife and God + double slit shot test is consciousness program that Scientist are lying about.
» " Tetrapods evolved " . Really ?
» How does biological multicellular complexity and a spatially organized body plan emerge ?