THE HISTORY OF HUMANITY IS IN OUR GENOME. WHAT WE KNOW ABOUT mtDNA OF HUMANS FITS THE 6000-YEAR TIMESCALE, EXPLAINS THE THREE HAPLOGROUPS, AND THE RELATIVE DIFFERENCES BETWEEN PRE AND POST FLOOD HUMANITY. One Eve in the beginning, population shrinks to 8 people (Noah, Noahs wife, 3 sons, 3 wives of Noahs sons). 3 boys get MTDNA from mom and then it ends. Genesis 9 says from these 3 the entire world was repopulated. We get our MTDNA from their 3 wives. Population would then grow and shrink to 8 at the time of the flood and then grow again momentarily ending with the splitting of people groups at the Tower of Babel.

The widely presumed “pre-humans” such as Homo erectus, Homo floresiensis, and Homo naledi were neither pre-human nor less-than-human. They were members of our own species who were undergoing accelerated genetic degeneration due to severe and extended inbreeding

The population of the human race at the time of the flood and immediately afterward certainly qualifies as a population size that would enable mutated alleles to become common as the population grew. With a starting population of only eight people, alleles, such as the O allele, could easily have increased in frequency through random genetic drift in the post-flood population, reflecting the present levels that are observed today and consistent with computer simulations modeling fixation.

" Dr. Robert Carter has spent considerable time analyzing the HapMaP data and has come to some intriguing conclusions. In his article “Does Genetics Point to a Single Primal Couple?
“The HapMap Project3 was designed to catalog a significant fraction of human genetic diversity. They analyzed millions of variants in thousands of people from around the world and made the data freely available.  What have we learned?
The human genome is young: shared blocks of DNA are large and there has not been enough time to scramble them to randomness.
The human population came from a single source: most blocks are shared among all world populations.
The human genome is falling apart: deletions tend to NOT be shared among populations, but are unique to subpopulations (this is further evidence for the youth of the genome and that we came from a single source population in the recent past).”

Critics have put forth the argument that the highly variable positions found within the genome is a contradiction to the created heterozygosity hypothesis. Dr. Robert Carter addresses this objection in his article titled “Adam, Eve, and Noah vs Modern Genetics” :

“ Most variable places in the genome come in two versions and these versions are spread out across the world. There are some highly variable places that seem to contradict this, but most of these are due to mutations that occurred in the different subpopulations after Babel.

There are indications, however, that Eve may not have been a clone. The ABO blood group is a textbook example of a gene with more than two versions. 3 There are three main versions of the blood type gene (A, B, and O). However, many, but not all, people with type O blood carry something that looks very much like a mutant A (the mutation prevents the manufacturing of the type A trait on the outside of cells). So here is a gene with more than two versions, but one of the main versions is clearly a mutation. This is true for many other genes, although, as usual, there are exceptions. The important take home point is that essentially all of the genetic variation among people today could have been carried within two people, if you discount mutations that occurred after our dispersion across the globe. This is a surprise to many.”
Source: Robert W. Carter , “Adam, Eve and Noah vs Modern Genetics,” Creation Ministries (May 11, 2010)

Mutations can clearly occur after the flood and after Babel. These mutations would create additional versions of the original created alleles. There is no contradiction to the hypothesis that suggests God would have encoded Adam and Eve with front-loaded DNA diversity."

Genetics vs. Genomics Fact Sheet September 7, 2018 1
All human beings are 99.9 percent identical in their genetic makeup. Differences in the remaining 0.1 percent hold important clues about the causes of diseases.

Harmful protein-coding mutations in people arose largely in the past 5,000 to 10,000 years November 28, 2012
A study dating the age of more than 1 million single-letter variations in the human DNA code reveals that most of these mutations are of recent origin, evolutionarily speaking. These kinds of mutations change one nucleotide – an A, C, T or G – in the DNA sequence.  Over 86 percent of the harmful protein-coding mutations of this type arose in humans just during the past 5,000 to 10,000 years.

The "Eve" Mitochondrial Consensus Sequence 2
We have calculated the consensus sequence for human mitochondrial DNA using over 800 available sequences. Analysis of this consensus reveals an unexpected lack of diversity within human mtDNA worldwide. Not only is more than 83% of the mitochondrial genome invariant, but in over 99% of the variable positions, the majority allele was found in at least 90% of the individuals.

Calibrating the Mitochondrial Clock
Mitochondrial DNA appears to mutate much faster than expected, prompting new DNA forensics. Regardless of the cause, evolutionists are most concerned about a faster mutation rate. For example, researchers have calculated that "mitochondria1 Eve, the woman which mDNA  was ancestral to that in all living people-lived 100,000 to 200,000 years ago in Africa. Using the new clock, she would be a mere 6000 years old. 4 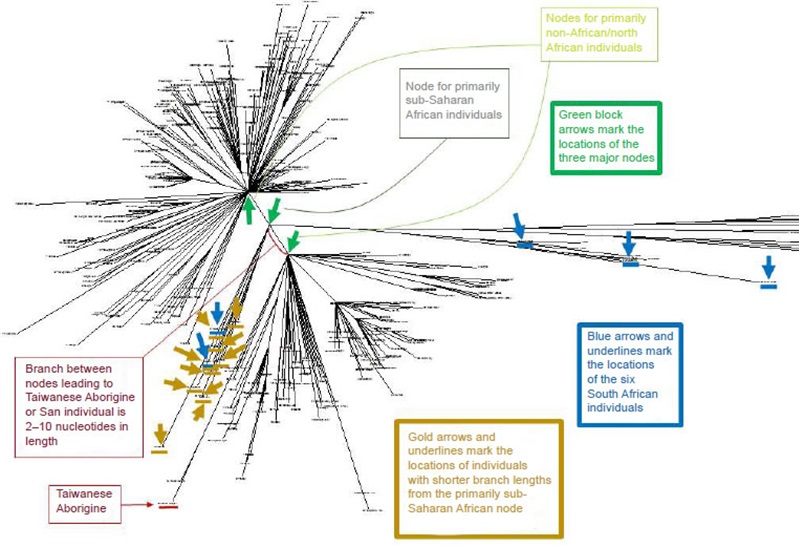 The Bible tells us God created Adam and Eve as the first people to live on Earth and that all human life that followed is descended from this single pair of original ancestors.
Now, research from the University of Basel in Switzerland suggests the word of the Holy Book may be based on more scientific fact than sceptics previously thought.

Here in lies the scientific evidence for mitochondrial Eve.
Let’s take a closer look at mitochondrial DNA, which serves as a genetic barcode, to reach these findings.

When somebody talks about human DNA, what do you visualize? If you understand a little about the subject, maybe you think about the 46 chromosomes that populate the nucleus of practically every cell that comprises your body. These chromosomes hold the substantial bulk of genetic data that you’ve inherited from your moms and dads.

Outside the nucleus, yet still within the cell, lie mitochondria. Mitochondria are microscopic structures that assist cells in a variety of ways, including things like producing the energy that cells require. Each mitochondrion– there are about 1,700 in every human cell– consists of an exact same loop of DNA about 16,000 base pairs long holding 37 genes. On the other hand, nuclear DNA contains 3 billion base pairs and an approximated 70,000 genes. 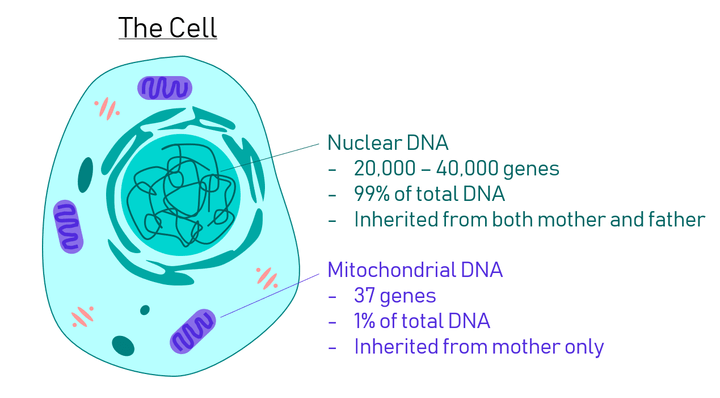 Inheriting mtDNA
Whenever an egg cell is fertilized, nuclear chromosomes from a sperm cell enter into the egg and merge with the egg’s nuclear DNA, producing a combination of both mom’s and dad’s genetic code. The mtDNA from the sperm cell, nevertheless, is abandoned, outside of the egg cell.

No matter how far back you go, mtDNA is constantly inherited solely from the mom. 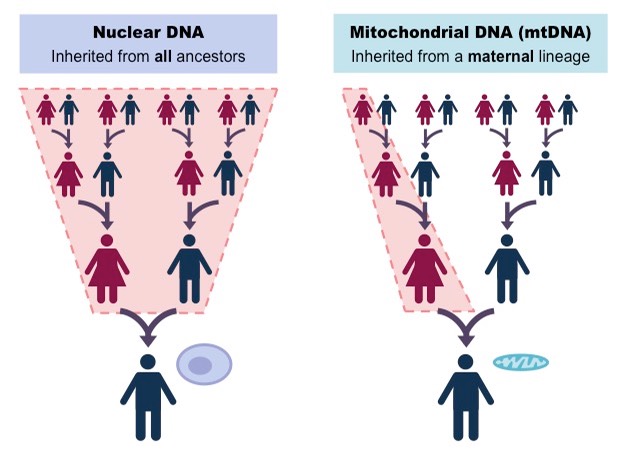 If you went back 6 generations in your own ancestral tree, you would see that your nuclear DNA is inherited from 32 men and 32 women. Your mtDNA, on the other hand, would have originated from only one of those 32 women!

Therefore, despite what the secular world tries to deny, we know the truth that is given to us by the Word of God.

Scientific evidence for Mitochondrial Eve points absolutely to the Biblical Eve of the Paradise that is now lost.

Re: Human origins: Created, or evolved?