Posts : 6559
Join date : 2009-08-09
Age : 55
Location : Aracaju brazil
I accepted  Tony's suggestion to debate the topic: "Real-world applications of Evolution and Creation". But not with the purpose to meed that challenge, and provide a number of examples where scientific predictions have been made based on creationism, and then confirmed. While they exist, my purpose in this debate is to put some things straight. I suppose ( i might be wrong on that ), that Tony thinks, that if that challenge is not met as he expects, that means that evolution tops creationism because it has apparently more explanatory power. But I think, a very important distinction has to be made here. I hear very often that Creationism or Intelligent Design is not science. Since still today, many adopt empiricism as an epistemological framework of truth-finding in regards to origins, that would imply that creationism is not true.  These are all in my view strawman questions and assertions. Science asks two relevant questions. One is, how things work, and the other is, how did things probably came to be and to exist. One is operational science, and the second is historical science. Creationism is based on a worldview that explains our existence though a unique creation event in the past, where God created the physical universe, life, and biodiversity.

Cosmological, chemical, and biological evolution, on the other hand, tries to explain our history and answer the same question without invoking a deity. Events that have eventually occurred only once in the past, do not need to be repeated, and neither requires that testable predictions are made. So the creation versus evolution debate is about if what we have discovered in the natural world leads us either to intelligent design, or natural mechanisms as the best explanation of how things came to be. Tony can of course claim, that upon my initial admission, he won the case. But my only concern is how we can best explain why there is something rather than nothing. If creationism does and can make successful scientific predictions is entirely irrelevant to the case if creationism is compelling or not.

So I do not see this as a debate about science versus religion. The evidence in the natural world is the same for all of us. When the question is about origins, the issue is how can we best explain our existence in a philosophical manner. It is not about proving things. Nobody has a time machine to go back and see what happened deep far in the past. Science judges the merits of competing models in terms of their simplicity, clarity, comprehensiveness, and fit to the data.

Creationism is not about making scientific predictions, but either post-dictions confirm the creation account in Genesis or not. Creationism permits drawing inferences in regards to religious claims,  which shapes our worldview, our moral values, and meaning. The claim made by Tony in another debate with Nephilim free is that creationism has no scientific application. It is evident, that if a creator indeed exists, he is supremely more intelligent than we are. And as such, we can observe how things in the natural world work ( which was actually the driving force of almost all science fathers, which were Christians, and attempted to understand the world we live in ), our observations can help us advance our modern world by imitating what is observed in the natural world, which is basically in all cases, far more sophisticated than what humans have invented so far.  We see the practical application in biomimetics, and Nephilim free has given several examples.  And I can eventually add a few more.

At the same time, there are a number of falsified evolutionary predictions, to which I can give a link, and the audience can have a look.

And Philip Skell wrote in the New Scientist in 2005:
Despite this and other difficulties, the modern form of Darwin's theory has been raised to its present high status because it's said to be the cornerstone of modern experimental biology. But is that correct?  Most can conduct their work quite happily without particular reference to evolutionary ideas,"  My own research with antibiotics during World War II received no guidance from insights provided by Darwinian evolution. Nor did Alexander Fleming's discovery of bacterial inhibition by penicillin. I recently asked more than 70 eminent researchers if they would have done their work differently if they had thought Darwin's theory was wrong. The responses were all the same: No.

But more smacking than that, the thing is that common ancestry and macroevolution are false. NEVER, in over 150 years, since Darwin's book " On the origin of species " was published, has even ONE, amongst hundreds or thousands, if not millions of science papers, provided ONE DEMONSTRATION, and empirical verifiable replicable evidence, that any of the evolutionary mechanisms proposed, could produce a primary macroevolutionary transition zone of speciation and population differentiation, with the rise of new body plans, What is an evolutionary novelty? photosynthesis,  wings, legs, flowers, eyes, hearts, and the origin of Hox genes.

Evolution, as probably understood by Tony, but certainly by many atheists,  is more than just an attempt to explain biodiversity. It is, and foremost, as well an metaphysical program with the attempt to explain reality without a creator, and as such, evolution is presented as an overarching materialistic worldview, that tops creationism in explanatory power.  I will demonstrate that the advance of the scientific endeavor, rather than explaining the origin of things more and more by natural means like unguided random events, physical necessity, and evolution, is demonstrating that the world we live in, is far more complex than originally thought, like in Darwins and Thomas Huxleys times, and life is based and depends on instructional complex information, and irreducible and interdependent machines and molecular cell factories and computers, and as such, demonstrates the imprints of an intelligent designer.

About one hundred years ago scientists thought our galaxy constituted the entire universe. The scientific consensus was that the universe was static and eternal. The beginning of the universe in a fiery big bang was not even remotely suspected. But in the thirties, Lemaître proposed what later became known as the "Big Bang Theory". with the implication that the universe had a beginning. Today, the Big Bang theory is consensus amongst astrophysicists.

We find therefore scientific advance perfectly confirming what the Bible says for millennia: Genesis 1:1: In the beginning, God created the heavens and the earth.

Genesis 1 explains the origin of vegetation, plants, the origin of animals, the origin of humankind, male and female, and the origin of the soul
Darwinian thought comes from the Victorian era, from a time where it was believed that biological Cells could come from some warm little pond, ready to undergo still more complex changes... So basically, from the pre-history of biological sciences, where nobody had any idea of what was going on. And Haeckel thought that biological cells are mere structureless protoplasm.He wrote, in 1871 in Nature magazine: The simplest independent organisms which we know, consist in fact of a structureless bit of protoplasm.

Today, we know better. Cells are not simple structureless bits of protoplasm, but of unparalleled gigantic complexity, a city, hosting billions of interconnected chemical factories, unimaginable for the human mind. Full of computers, information, machines, and factories. Fully automated, robot-like operated, enormously well suited to adapt to the environment. Such things come undoubtedly from a super-intelligent creator. and confirm the Genesis account.


No scientific experiment has been able to come even close to synthesize the basic building blocks of life and reproduce a  self-replicating Cell in the Laboratory through self-assembly and autonomous organization.
When the Miller Urey experiment was made in the fifties, the hope was that in a predictable future, the riddle of how life would emerge would be solved. That prediction has not been met. Rather than coming closer to explain how life emerged, what science has unraveled, is that the task is in the realm of the not solvable by natural, unguided means.

Darwin claimed that all life forms originate from a common ancestor. A view that is still held by a majority of evolutionary biologists. But evidence demonstrates that this is not conceivable, in face of the huge differences between the three domains of life. I can list at least six issues that refute the claim of common ancestry. Based on evidence seen in biochemistry on a molecular level, we can now say, that Darwin's theory of evolution by natural selection in regards to primary speciation & macroevolutionary level has been falsified.


1. The DNA replication machinery, most of the core replisome enzymes and components are not homologous.
2. Bacteria and Archaea differ strikingly in the chemistry of their membrane lipids.
3. Sequences of glycolytic enzymes differ between Archaea and Bacteria/Eukaryotes.
4. There are at least six distinct autotrophic carbon fixation pathways. Since the claim is that this is how life began fixing carbon, and the first carbon fixation pathways were anaerobic, this represents a major puzzle for proponents of common ancestry,
5. There is a sharp divide in the organizational complexity of the cell between eukaryotes, which have complex intracellular compartmentalization, and even the most sophisticated prokaryotes (archaea and bacteria), which do not.
6. A typical eukaryotic cell is about 1,000-fold bigger by volume than a typical bacterium or archaeon and functions under different physical principles.

In engineering it is axiomatic, that we use our planning minds to project, invent, conceive, develop elaborate, engineer, architect, devise, plans, blueprints by the use of instructional complex codified information to execute and construct functional things by arranging elements, sizes, materials, forms, integrated parts like in machines, or production lines in fabrics,  to accomplish specific goals, functions, and purposes, according to those plans. We know by experience, that our intelligence is the most capable tool to make:

- something made based on mathematical principles
- systems and networks functioning based on logic gates
- things purposefully made for specific goals
- elaborate plans containing specified complexity, the instructional blueprint or a codified message
- constructing irreducible complex and interdependent systems or artifacts composed of several interlocked, well-matched parts contributing to a higher end of a complex system that would be useful only in the completion of that much larger system.
- hierarchically arranged systems of parts based on order or orderly patterns
- Intelligence can create artifacts which use might be employed in different systems ( a wheel is used in cars and airplanes )
- Fine-tuning

are all actions either pre-programmed by intelligence in order for machines to perform such actions,  or are performed or done so directly by intelligence.

Even IF someone would invent evolutionary algorithms to perform all actions described above, that invention would be the result of intelligent action, and it is by no means clear to me, how these algorithms would lead to achieving a specific goal in a more advanced manner. 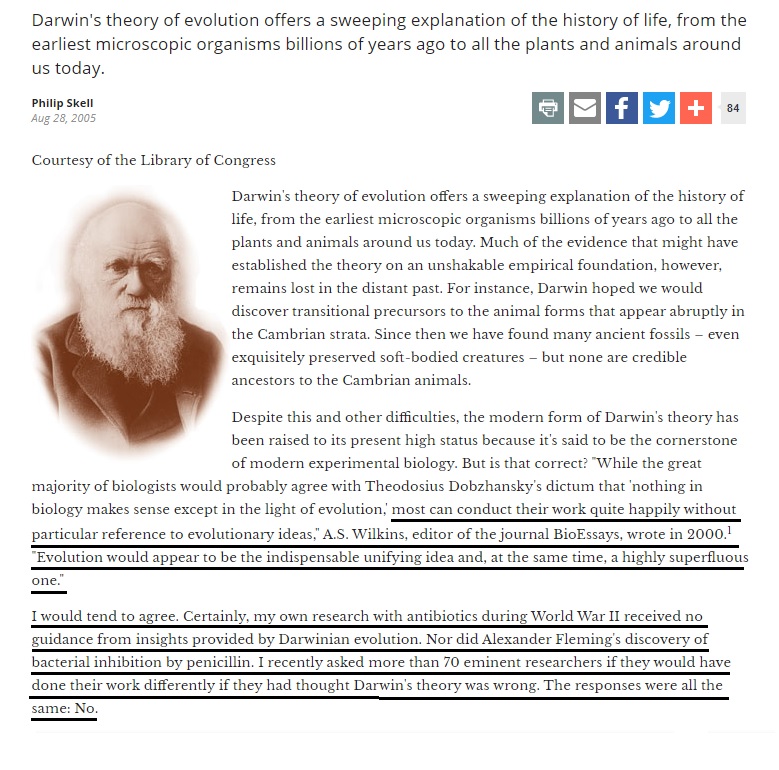 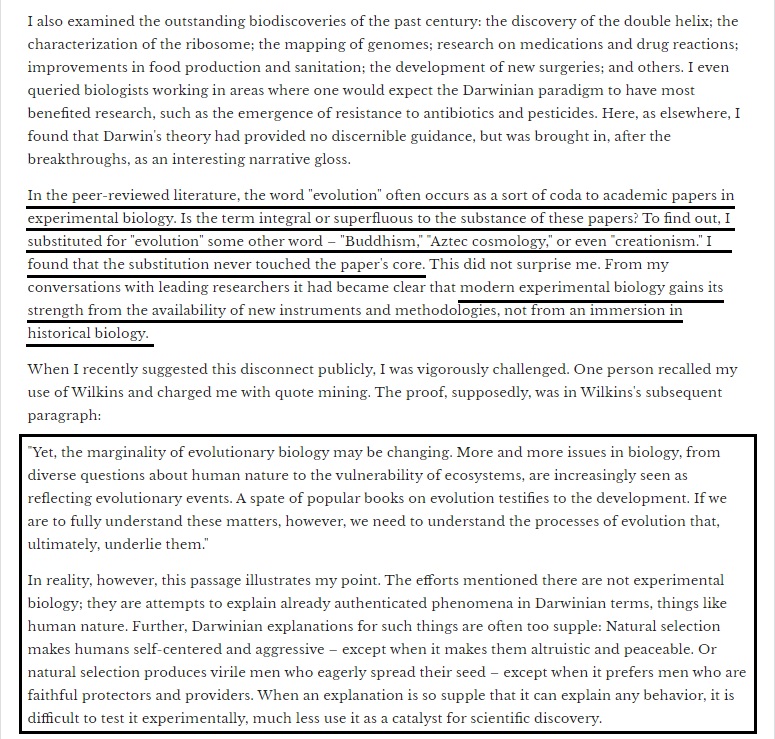 Naturalism is stopping more science today than fundamentalism, by forbidding many discussions and making many questions unaskable. 1 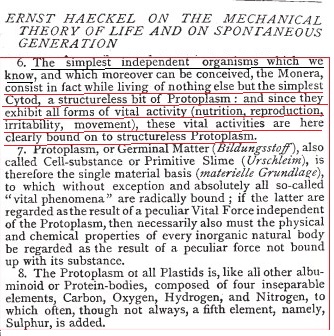 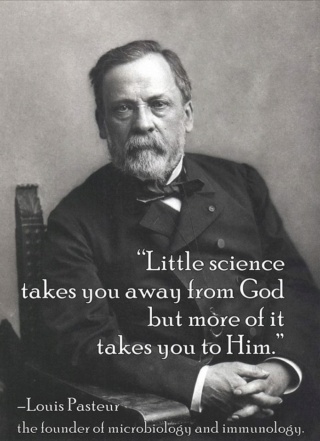 Why Do We Invoke Darwin?
https://www.the-scientist.com/opinion-old/why-do-we-invoke-darwin-48438

» Most frequent responses given by proponents of naturalism in a debate, and how they can improve their debate skills.
» Perguntas ....
» Debate with Aron Ra
» Debate with snake was right
» Debate with JL Warren